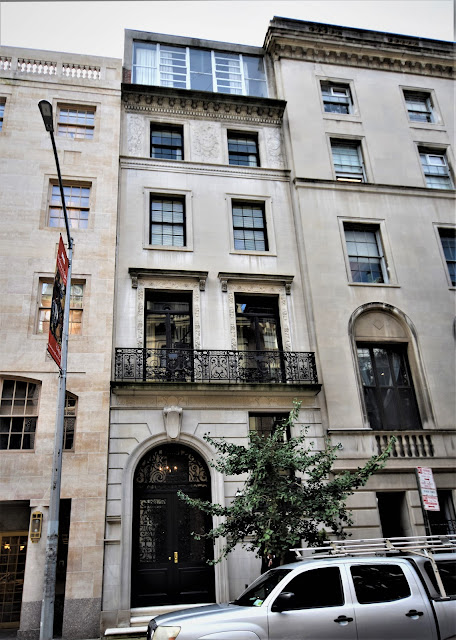 Borden (whose family traced its New England roots back to 1635) worked his way up from a clerk in a dry goods jobbing house to heading a fabrics printing firm, the American Printing Company.  In 1869 he extended his control over his business by building three fabric mills to manufacture his own goods; adding the Fall River Iron Works Mills later.

The Bordens had seven children and owned homes in both Manhattan and Rumson, New Jersey.  At the time of his death on May 27, 1912, only three of his children survived--Bertram, Howard and Matthew.  Matthew was disinherited for having married a Jewish girl; so Bertram and Howard received the bulk of their father's $6 million estate--more than $156,000 today.  (Incidentally, Matthew accepted $1 million from his brothers in exchange for not contesting the will.)  Bertram was in charge of the fabrics firm, M. C. D. Borden Company, and Howard ran the Fall River Iron Works Mills.

Bertram H. Borden was born in 1868.  In 1896 he married Mary Livinia Owen, daughter of Dr. Henry E. Owen.  The Owen family was prominent in the Rumson summer social circle.  The couple would have no children.

On January 11, 1919 the Real Estate Record & Builders' Guide reported that Borden had purchased the four-story brownstone at No. 48 East 68th Street.  The article noted he "will rebuild for his occupancy."   The 20-foot house was part of a row completed in 1878 and its dour neo-Grec architecture was decidedly out of date.   Within a few weeks Borden had hired Carerre & Hastings to design an up-to-date residence on the site.  On March 1 the Record & Guide noted "only the side walls of the original building are to be used."


Borden's choice of architects is not surprising.  Not only was Carrere & Hastings among the preeminent architectural firms of the day, Thomas Hastings had designed Matthew C. D. Borden's handsome stable-carriage house in Rumson.  The firm produced a quietly-elegant five-story neo-French Renaissance mansion faced in limestone.  Completed within the year, the house cost Borden the equivalent of nearly $810,000 today.

The architects placed the arched entranceway three steps above the sidewalk, drawing attention away from the service entrance to the side.  A stone balcony with a handsome French railing fronted a pair of French doors at the second floor, or piano nobile.  Above each set a carved basket of flowers spilled festoons of fruits and blossoms down the sides of the enframements.  Intricate panels of bas relief carvings at the fourth floor depicted the arts.  The fifth floor, above an ornate stone cornice, most likely took the form of a mansard roof. 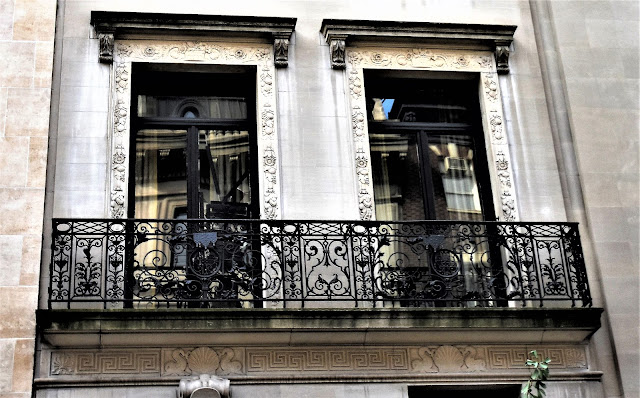 Bertram and Howard had inherited equal shares of the sprawling estate an Rumson.  Howard took the portion with the mansion, and in 1914 added another 90 acres to his share.

Bertram enlarged his section, as well, in 1917.  The same year that he began construction on his townhouse, he commissioned Arthur C. Jackson to design his Tudor Revival style summer home in Rumson.  The New York Times called it "one of the show places of this locality."

Mary was well-known for her charity work.  In December 1919, shortly after moving into the 68th Street house, she was listed as a patroness of a concert at the Hippodrome to benefit the Stony Wold Sanatorium.  The couple was prominent in Manhattan society, as well.   When, for instance, the newspapers annually listed the season's box holders in the Metropolitan Opera House (people The New York Herald on November 7, 1920 called "families able to enjoy their opera amid such luxurious surroundings) Bertram and Mary were consistently included.  They shared their box with Howard and his wife.

But it was in Rumson that the Bordens were best known.  Bertram, like his father, was enthusiastically athletic--an adept polo player, a yachtsman, and equestrian.  He owned and flew his own airplane, as well.

Bertram's name appeared on the sports pages repeatedly for his wins both in polo and in yacht races.  One victory, on July 31, 1920, was a rather hollow one.   It was an extremely windy day when the vessels embarked on their quest for the Rumson Country Club's annual cup.  The New York Herald reported "Commodore Samuel Riker, Jr., was sailing his yacht Frances when a hard puff struck her and keeled her over."  One by one the other yachts capsized.  The newspaper concluded "The race was won by Bertram H. Borden's Rumpus, which was the only boat to finish."

The city house held much of the Borden's extensive art collection  Many of the entertainments here revolved around Mary's charity work.  On February 19, 1928, for instance, The New York Times noted that on March 8 the Thursday Morning Lenten Sewing Class of the Cribside Committee of the Babies' Hospital would be held in the Borden residence.

Mary was widely known for her gardening skills and was a an important player in the Rumson Garden Club.  The organization's annual flower show was routinely held on the grounds of the Borden estate. 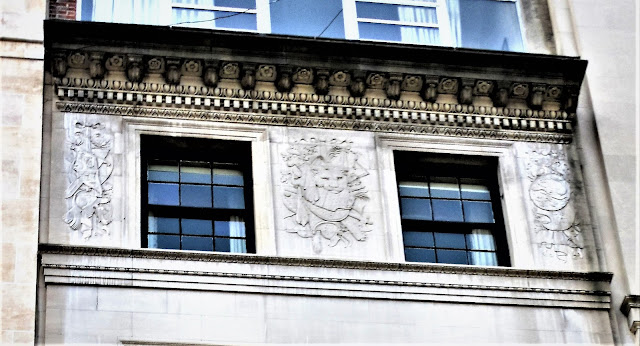 Although they did not give up ownership of No. 48, they moved out in 1930.  On June 25 The New York Times reported that Bertram had purchased a "large duplex apartment containing fourteen rooms and six baths" in the newly-constructed 740 Park Avenue.  The couple leased the 68th Street mansion to well-heeled tenants.

When the Bordens returned from Europe late in the summer season of 1933 they went directly to the Rumson estate.  On September 22 Mary was taken to the Monmouth Memorial Hospital with appendicitis.  The 62-year old died there three days later.  In reporting on her death, The New York Times remarked that she "had been a leader in philanthropic work" and noted "Together with her husband, Mrs. Borden donated an annual scholarship at the Red Bank High School."

That was only a hint at the massive amounts of money the Bordens lavished upon the community.  In 1920 they had donated a five-acre property, Victory Park to the town as a memorial to the soldiers from Rumson who died in World War I.  They built a stadium for the school, and Bertram established the Mary Own Borden Memorial Foundation.

Mary's estate was appraised at over $2.2 million.  The 68th Street house, title to which was in her name, was left to her husband, as was the New Jersey property.  She bequeathed paintings to the Metropolitan Museum of Art, including a landscape by George Innes, and paintings by Joseph Israels, William-Adolphe Bouguereau and Jules Breton.  Those four artworks alone were valued at $128,000 in today's dollars.

Bertram leased the 68th Street house to a succession of wealthy New Yorkers, including Clement D. Cates, Virginia Hemingway and Mrs. Alice Stone Farmer.  He sold the property around 1949.  By now he was living permanently in Rumson, where he died at the age of 82 in the spring of 1956.

In 1951 a conversion was begun to convert the former Borden mansion to two apartments per floor, except the fourth which had three.  The mansard roof was disfigured into glass-fronted penthouse level which, while architecturally stylish for the period, has nothing to do with Carrere & Hastings' French Renaissance design.

Although termed "apartments" by the Department of Buildings, the basement spaces were used commercially.  In 1951 Laumont & Malagon, photography studio was here; and in 1953 A. Graham Biddle, a plastic surgeon, had his office in the building. 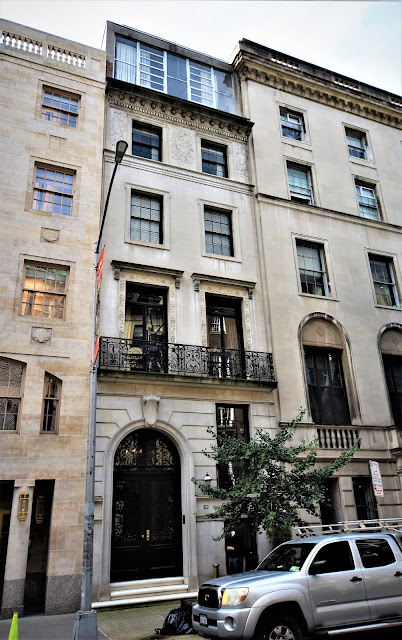 A subsequent renovation, completed in 2000, resulted in two "garden" apartments in the basement level, and a single-family home above.   Other than the somewhat gruesome top floor, the sedate exterior of the Borden house is remarkably intact.

photographs by the author
Posted by Tom Miller at 4:37 AM