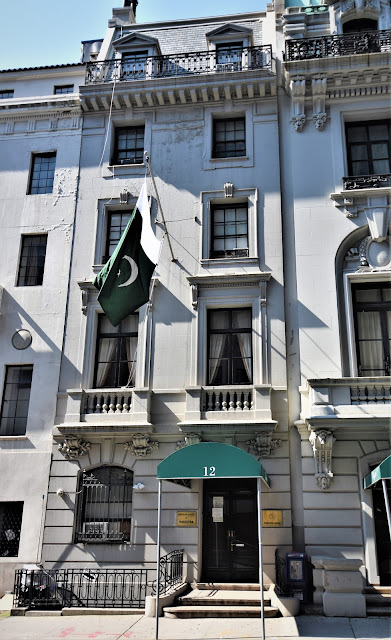 In June 1906 Minnesota railroad magnate James J. Hill purchased the sumptuous mansion at No. 8 East 65th Street.  The New York Times remarked that he was the "second of the Western railroad magnates to reach the decision recently that he spends enough time in New York to justify his buying a house here."  Another member of the Hill family would, too, be moving to the block before long.

On September 21 that same year a Minnesota newspaper reported "The engagement of Miss Gertrude Hill, daughter of James J. Hill, to Michael Gavin, a lawyer of New York, was announced last evening at a dinner given at the home of Mr. and Mrs. Theron Slade."  Noting that Gertrude had made her debut two years earlier, the article added that she "is musical in her tastes."

Next door to the Hills' New York home, at No. 12 East 65th Street, was the 22-foot wide brownstone residence of Judge Charles H. Truax, built in 1876.  The Traux family had lived in the house since the mid 1890's.  In 1907 the judge sold the now out-of-fashion brownstone to Hill.

The title to the property was put in Gertrude's name.  When the couple returned from their honeymoon trip, they set about planning their new home.  On August 29, 1908 the Real Estate Record & Builders' Guide reported that architect Walter B. Chambers had been hired to design a five- and six-story brick and stone dwelling.  The projected cost was placed at just over $1 million today.

The New York Times explained the "five- and six-story" issue.  "The design is unusual, the house being five stories high in front and six stories in the centre, and three at the rear.  It will have a mansard and a second-story balcony, and be finished with a central stair hall and foyer."

Chambers carefully melded the new house to its neighbors to the west.  He matched the rusticated base, and lined up the second floor balconies and cornices.  A quieter presence, the design was nonetheless harmonious and elegant.

Although educated in law, Gavin was a junior partner in the investment banking firm of Moore & Schley when the couple moved in.  In 1915 he joined the brokerage firm of Montgomery & Company; and before long became a full partner in the financial firm Montgomery, Clothier and Tyler.

The Gavins were highly visible in society, traveling to Europe regularly and entertaining both in the Manhattan home and their Bernardsville, New Jersey estate.  On August 19, 1910 The New York Times advised "Mr. and Mrs. Michael Gavin will sail on the Adriatic next week for France, where they expect to visit friends and spend considerable time motoring.  They will return to New York in October."

Gertrude was highly active in charities and activities related to the Roman Catholic Church.  In 1920 she was elected the first president of the National Council of Catholic Women.  She was awarded the papal medal Pro Ecclesia and pontifical diploma in 1924.  Her religious interests spilled over into the entertainments in the 65th Street house.  On January 16, 1923, for instance, she hosted a lecture by Father Clifford, Professor of Scholastic Philosophy at Columbia University, on "faith, faith cures and the doctrine of the miraculous."

In 1920 the Gavins gave up the Bernardsville summer home after Graenan, their French Renaissance-style mansion designed by John Russell Pope, was completed on their 50-acre Oyster Bay, Long Island estate.  In 1926 Gertrude had Chapelle de St. Martin de Sayssuel, a medieval chapel in the French village of Chasse, dismantled and shipped to the Oyster Bay estate.  John Russell Pope was brought back to oversee the careful reconstruction on the grounds.   The project sparked the legend that Graenan, too, had been imported stone-by-stone from France; a rumor that survives.

In the meantime, Gertrude may have surprised some when she announced in November 1924 that she would be stepping down from the presidency of the National Council of Catholic Women.  She had been selected by Cardinal Patrick Joseph Hayes to "work among Catholic immigrants landing at New York."

Quoted in The New York Times on November 10, she explained "Many of these Italians as well as Catholic immigrants from other countries become confused in the struggle for existence in the new country and from lack of information sometimes make mistakes."

Michael Gavin retired in 1928.  His time was not idle.  The Gavins traveled almost every year to the Saint John River where Gertrude loved salmon fishing.  Along with the Hills, they were members of the exclusive Jekyll Island Club.  They eventually acquired a third home in Boca Grande, Florida.

Wealthy socialites gave their assistance during World War II to relief work and to military support--like the Soldiers' and Sailors' Clubhouse.  Gertrude did her part by helping to organize and run the Cathedral Canteen of New York.  Both the Departments of the Army and the Navy awarded her certificates of appreciation following the war.

In 1949 the Gavins sold the 65th Street house to the Dominion of Pakistan.  They moved to an apartment at No. 760 Park Avenue where, within six months of one another, the couple died in 1960. 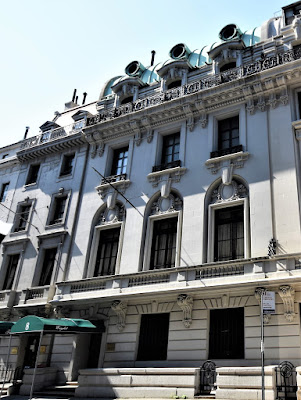 The Republic of Pakistan purchased the James Hill mansion in 1951 and today still owns both properties.