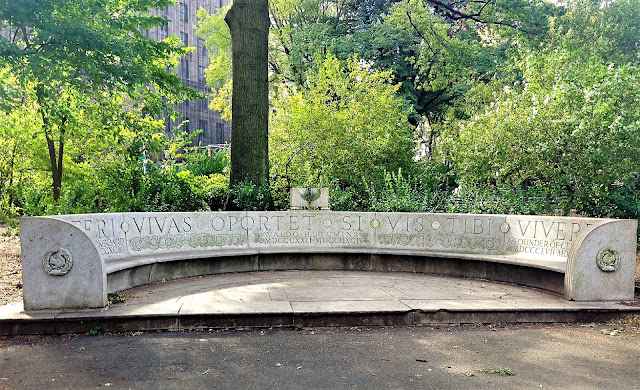 In an article about civic memorials in 1913, The Lookout magazine lamented "in a busy, careless city the average person soon forgets."  That short civic memory is responsible for statues and monuments throughout the city in honor of persons--like John Purroy Mitchel, Roscoe Conkling, and Samuel S. Cox--once renowned, but now essentially forgotten.  And like Waldo M. Hutchins.

Hutchins and his wife, the former Elizabeth Ellsworth, had four children--Julia, Augustus, Waldo and William.  Born in Brooklyn, Connecticut on September 30, 1822, he traced both sides of his family to the first settlement of Connecticut.

Hutchins's career was impressive and wide-flung.  In 1842, the year he graduated from Amherst College, he traveled to New York City and entered the law office of Slosson & Schell, "as a student."  He was admitted to the bar in 1845 and in 1852 was admitted as a partner in the law firm with John Slosson and Augustus Schell.

His meteoric legal career would have been enough to earn him wealth and fame.  At just 29 years old he was chairman of the Judiciary Committee of the State Assembly.  But seemingly indefatigable, he branched out into railroads, insurance, banking and politics.  The same year he was made a partner in Slosson, Schell & Hutchins, he was elected to the New York Assembly.

And decades later the New York State Bar Association Reports noted "Soon after the passage of the act of 1853, providing for the construction in the city of New York of the Central Park, he was appointed one of the Commissioners."  Hutchins successfully juggled his various responsibilities.  In 1865 he successfully represented the City of New York in its fight to established a professional fire department; and in 1867, following his term in the Assembly, he made time to serve as a delegate to the State constitutional convention.

In 1878 Alexander Smith won the Democratic nomination for Congress.  But on the night before the election, he died.  On October 5, 1879 The New York Times reported that Waldo Hutchins had been nominated as his replacement.  He was elected on November 4 and served until March 3, 1885.

Now back home in New York City he resumed his law practice.  On November 27, 1881 The Times reported that he had been elected to the post of president of the New-York Park Association.  The article mentioned its object was "to secure increased park area for the City of New-York."  A report read that the meeting noted "the park acreage of New-York as compared with that of other great cities...had been completely outstripped in providing such places of creation for her citizens."

His tireless fight to acquire more parkland for the city was in part responsible for his being re-elected as a Park Commissioner in June 1887.  Two years later he was chosen its president.  The New York State Bar Association Report of 1889 made note "it is proof of the interest he took in those breathing spaces and pleasure grounds of the people, that, although his connection with the board was interrupted by duties in Congress and business interests, he returned to it in later years."

While Hutchins's creating of green space and roads was overwhelmingly popular, his support of using Central Park as the site of a world exhibition in 1889 fell flat.  The New York Times, on July 8, railed against the idea, equating it to "the condemnation of Central Park" and saying that while New Yorkers would welcome a world's fair they were "irrevocably opposed to the destruction of the advantages they already possess in their only completed park."  The fair did not happen.

Hutchins received another disappointment that year after he offered a position to Frederick Law Olmstead as a consulting landscape architect on retainer.  Olmstead did not respond warmly.  Writing from his home in Brookline, Massachusetts on June 8, 1889, he said in part:

I do not wish to be called in occasionally to prepare or aid in preparing details of design for works with regard to which I have no continuous or comprehensive responsibility...Judging from the experiences to which I have referred it seems to me probably that what I have thus said will make it unnecessary that you should be put to the expense of my visiting New York at this time.

Although Hutchins had incurred the ire of The New York Times over the world's exhibition concept, he won its admiration when he fought against the relocation of the precursor of the Central Park Zoo in 1890.  An editorial on June 27 said partly "Mr. Waldo Hutchins really deserves the thanks of his fellow-citizens for preventing two of his associates in the Park Commission from voting the removal of the menagerie to the North Meadow."  The editors accused Commissioners Gallup and Borden of being detached.  "There is something grotesque in the notion that the general promiscuous public takes a more intelligent interest in the park, has a greater pride in it, and is much more concerned to prevent its spoliation that the men who are its official guardians."

In January 1891 Hutchins became ill.  On February 5 The Evening World announced "Park Commissioner Waldo Hutchins is lying seriously ill at the Park Avenue Hotel...It began with a severe cold, complicated with a bilious attack, and later developed into a slight attack of pneumonia."  The article added "Should he recover, he will not be able to leave his room for ten days or more."

He did not recover.  On February 9, 1891 The New York Times reported "Mr Hutchins made a hard fight and passed the night safely...A little after 5:30 o'clock yesterday morning a change for the worse was noticed, and half an hour afterward he sank into a stupor.  At 7:20 o'clock he died."

The following day The Brooklyn Daily Eagle wrote "Seldom do so many venerable New Yorkers come together to pay homage to the memory of the dead as there were assembled this morning in the Madison square Presbyterian church in New York, during the services over the remains of the late Park Commissioner Waldo Hutchins. The body of the church was filled."

The name of Waldo M. Hutchins was well on the road to obscurity when his son, Augustus S. Hutchins, stepped in.  Like his father's his was a broad-based career.  An attorney, he was also a vice president in the Metropolitan Savings Bank; and director in the North River Insurance Co., the United States Fire Insurance Co., and the Williamsburgh City Fire Insurance Co. 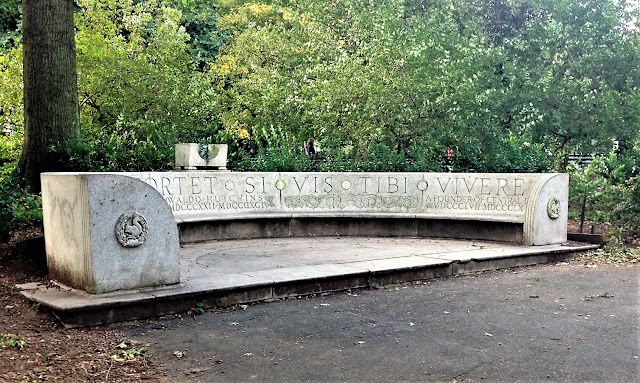 The semicircular (or exedral) shape has a secondary purpose--it is a clock of sorts.  Twice a year on the vernal and autumnal equinoxes its shadow precisely coincides with three arcs incised into the platform--at 10:00 a.m., at noon, and at 2:00 p.m.  Additionally, a sundial, incorporating an Art Deco bronze figure, perches on the back of the bench.  The sculpture, attributed to Paul Manship (who created the monumental Prometheus statue at Rockefeller Center), depicts a female dancer trailing flowing scarves. 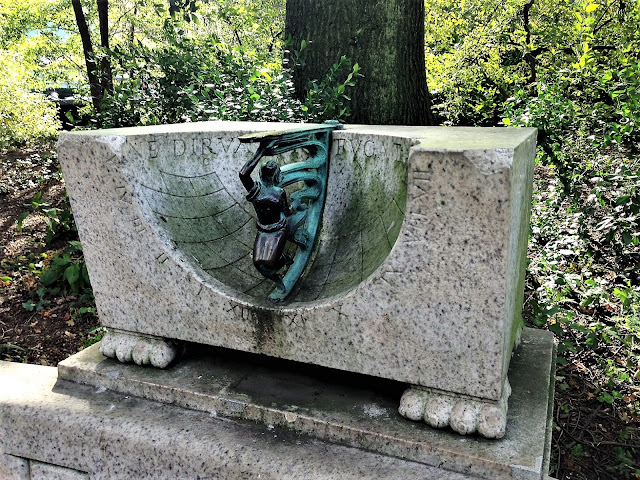 Echoing Waldo Hutchins's life-long work for the citizens of the city, a Latin inscription along the back of the bench translates "One must live for another if he wishes to live for himself."  The inscription within the sundial translates "Let it not be destroyed by the passage of time."

The fascinating astronomical bench sits greatly unnoticed on a slope near the Conservatory Water, or model boat pond.  And despite his son's valiant efforts, Waldo M. Hutchins's name is largely forgotten.