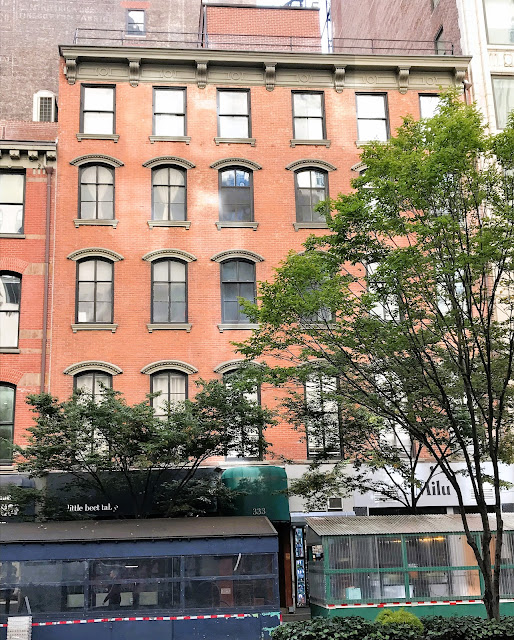 Artist and designer Louis Comfort Tiffany established Louis C. Tiffany & Company in 1878.  It expanded three years later with the founding of Louis C. Tiffany & Co., Associated Artists.  Within a year the decorating firm was hired to do work in the homes of Cornelius Vanderbilt II, Ogden Goelet, Mark Twain, and to decorate several rooms in the White House.
Tiffany had been experimenting with glassmaking since 1875.  When Louis C. Tiffany & Co., Associated Artists was dissolved in 1883, he forged on with Louis C. Tiffany & Co. and, in 1887, the newly formed Tiffany Glass Company.  On March 5 that year, the Real Estate Record & Guide reported that P. H. Mandel had leased the building at 333-335 Fourth Avenue to the Tiffany Glass Company.
The brick-faced, Italianate style building was erected around 1861, and was being advertised for "storage and light manufacturing" in 1870.  Handsome dentiled lintels crowned the elliptically arched windows of the second through fourth floors.  The scrolled cornice brackets were separated by a paneled frieze.

Real Estate Record & Builders' Guide, July 5, 1890 (copyright expired)
The name of the firm changed again in 1892.  On February 27 an announcement in the Record & Guide read:

The following year, the firm's exhibition at the Chicago Columbian Exposition displayed its expertise in interior decoration, glass, and mosaics.  It constructed an entire chapel, one which must have awed the thousands of visitors to the fair.  On April 1, 1894, The Sun reported, "The Tiffany Chapel, which was one of the most notable American exhibits at the World's Fair, can still be seen at 333 Fourth avenue.  It represents the interior of a chapel Romanesque in the style of its arrangement and decoration and a remarkable demonstration of what may be accomplished in modern ecclesiastical art." 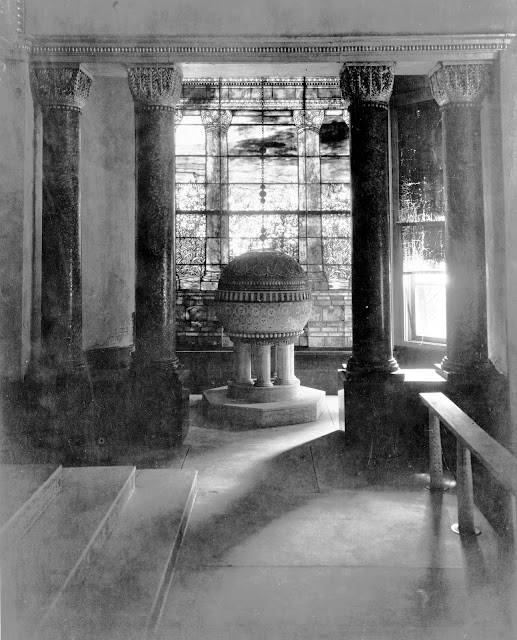 The Baptistery of the Tiffany Chapel.  from the collection of the Library of Congress
New Yorkers and tourists visited the Fourth Avenue building to view the exhibit.  The Sun described the elements, saying "The mensa is a single slab of Carrara marble resting upon a frontal of white glass mosaic made of 150,000 pieces.  This is ornamented with the Apocalyptic emblems of the four Evangelists."  The chapel was complete, including "six canonical candlesticks of gold filigree embedded with semi-precious stones and an altar cross which is a blaze of white topazes so arranged on a thin metal frame that they scintillate in every direction." 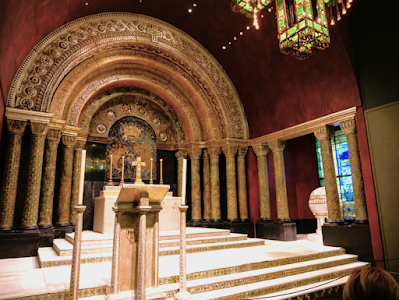 A portion of the chapel as it is exhibited today at the Charles Hosmer Morse Museum of American Art in Florida. photograph by mirsasha.
The reredos consisted of polished black marble with iridescent glass mosaics of peacocks among twining vines.  Above it rose a half-dome, "covered in ornaments in relief and made brilliant by overlays of gold, settings of jewels, and inlays of mosaic inscriptions."  The dome was supported on columns composed of 200,000 squares of glass mosaic.  They sat against a background "of mosaic, and having astragals of jewels set in gold," said the article.  There were also, of course, stained glass windows.  "The entire chapel was made from the design of Mr. Louis C. Tiffany, and was executed under his personal supervision."  (Following the exhibition, it was disassembled and placed in storage.  It was installed in the basement of the Cathedral of St. John the Divine in 1898 where it eventually fell into disrepair.  Tiffany repurchased and restored it for his Long Island home, Laurelton Hall.  It was again dismantled in 1949 and sold in various sections.)
The Tiffany Chapel may have been the first time that extraordinary pieces were exhibited here, but it was certainly not the last.  In 1894 the firm was commissioned to design and execute a frieze for the rotunda of the Marquette Building in Chicago.  The work, executed in favrile glass mosaics, took an entire year to complete, and, prior to shipping, was exhibited in the Fourth Avenue building beginning on April 13, 1895.
Designed by Jacob A. Holzer, the frieze was four feet high and 112 feet long, its three panels depicting the travels of Marquette and Joliet, who explored the Mississippi River in 1673.  The Sun reported, "There are 200,000 pieces of glass and 10,000 pieces of pearl used in the work."
Later that year, another important commission was placed on display.  The New York Times reported on December 12, "An unusually attractive and brilliant stained glass window is now on view at the studios of the Tiffany Company, 333 Fourth Avenue.  The design is by Frederick Wilson, and the work goes to the Young Men's Library at Troy, N. Y., the gift of Mrs. Mary Hart of that city in memory of her husband."  Entitled The House of Aldus, Venice, A. D. 1502, it depicted the printer Aldus presenting Doge Leonardo Loredan the proof pages of the first popular edition of Dante.  The New York Times said, "Yellow, reds, and greens predominate, while by use of the new Favrile glass exquisite tones and effects of astonishing luminosity have been obtained."  Simultaneously, two other memorial windows, one for the Unitarian Church of the Saviour in Brooklyn, and the other for Christ Episcopal Church in Fitchburg, Massachusetts, were exhibited. 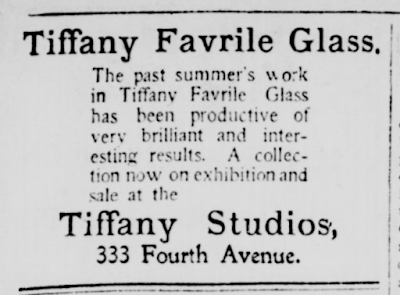 By the time of this exhibition, the firm was known as Tiffany Studios.  New-York Daily Tribune, October 13, 1897
By the turn of the century, the firm's extraordinary success prompted it to expand into the former carriage auction house next door, at 337-341 Fourth Avenue, owned by Ogden Goelet. 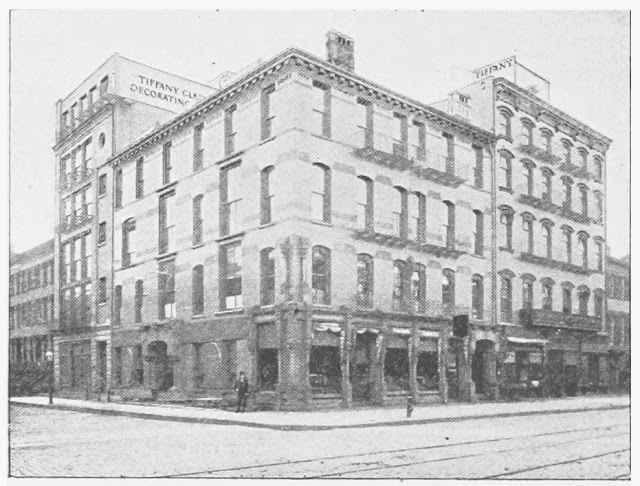 The corner building had been home to Allen B. Miller & Brother's carriage auction house.  King's Views of New York, 1893 (copyright expired)
Tiffany Studios was not immune to labor problems.  In 1903, the workers went on strike.  Labor issues at the turn of the last century were often marked by violence, but in this case it was internal corruption within the union that caused problems.  Union leader Sam Parks approached the foreman of Tiffany Studios, Louis Schmitt, demanding $500 "to settle the strike."  It was a considerable amount, equal to around $16,000 in 2022.  Management paid the money, then filed charges against Parks for extortion.  He was indicted on September 14, 1903. 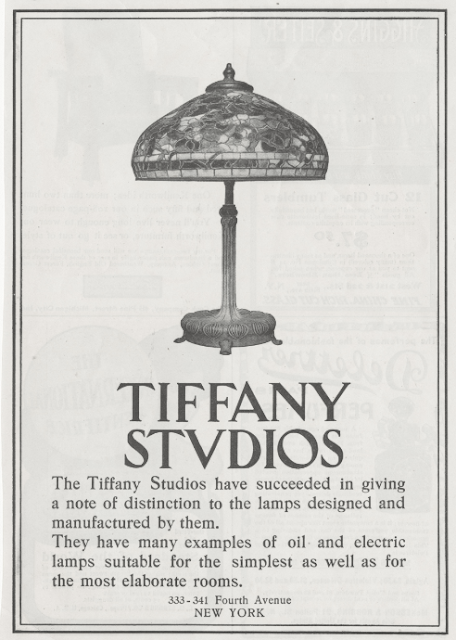 This 1901 advertisements reflects the expanded address.  (copyright expired)
Requiring ever more space, in 1905 Tiffany Studios moved from Fourth Avenue to the former Knickerbocker Athletic Club at the corner of Madison Avenue and 45th Street.  Ogden Goelet leased part of 333-335 Fourth Avenue to the Fifth Avenue Auction Rooms.  For decades it would be the scene of estate auctions, many of them liquidating the collections of millionaires.  On February 1, 1906, for instance, the firm advertised the auction of "the extensive and valuable art collection formed by Mr. T. Idsumi, a native expert and collector of Kioto, Japan."
The building was used, as well, for exhibition space.  On April 20, 1907, for instance, The Evening Post reported, "The first annual exhibition of the Guild of Book Workers will be held at the old Tiffany studios, No. 333 Fourth Avenue...on April 25, 26, 27 and 29.  Examples of hand-printing on hand-made paper, illuminating and binding will be shown."  The exhibitions were held every year through 1909.
That year Goelet leased the lower parts of the corner building to the Fifth Avenue Auction Rooms, as well.  The two structures, however, were not joined internally.  While the auction house operated from the lower floors, the upper portion of 333-335 held artists studios--like those of Thomas R. Manley and Robert L. Dodge in 1911--and businesses spaces.  The National Metalizing Co. was here in 1915.  The firm manufactured decorative and functional items like lighting fixtures. 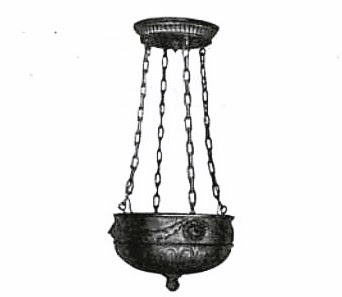 This National Metalizing Co.'s hanging fixture provided indirect lighting to "parlors, drawing rooms and receptions rooms."  Electrical Record, October, 1915 (copyright expired)
Also in the building was the publishing firm, The Century Co.  It published The Secrets of Polar Travel by Rear Admiral Robert E. Peary from the address in 1917.
In the meantime, the Fifth Avenue Auction Rooms continued to operate from both buildings.  In March 1919, the sale of the James L. Bishop estate was held in the portion at 333-335 Fourth Avenue.  The New-York Tribune reported, "The collection comprises in part Louis XV and XVI furniture, including Aubusson suites; a marble fountain representing 'Venus Rising from the Shell,'" and paintings, etchings, "books in fine bindings," etc.  The Fifth Avenue Auction Rooms would continue to occupy the ground floors through 1922.
By 1919 the offices of the Schola Cantorum occupied space in 333 Fourth Avenue.  Founded in 1909 as the MacDowell Chorus, it was now headed by composer and conductor Kurt Schindler.  On October 19, 1919, The Sun reported on the upcoming season, saying, "The chorus held its first rehearsal on October 8, when work was begun on the Mozart 'Requiem' and a Bach cantata...There are still a few vacancies for professional singers, especially sopranos and tenors, information concerning which may be had at the office of the society at 333 Fourth avenue."  The Schola Cantorum would occupy space here through 1922.
At the time the studio of renowned photographer Jennie Tarbox Beals was in the building.  The first published female photojournalist in the United States, she was especially known for her photographs of Greenwich Village.  She used her studio as a meeting space, as well.  On October 9, 1921, for instance, the New-York Herald reported, "The poetry group of the New York League of American Penwomen will meet Wednesday at the studio of Jennie Tarbox Beals, 333 Fourth avenue."
Another noted figure to have an office here was architect and painter Edwin Hooper Denby.  Born on February 9, 1872, his work received an honorable mention at the Architectural Section of the Paris Salon in 1895.  By the 1930's, when he established his office and studio here, he had designed churches, schools and apartment buildings.  But he was, perhaps, as well known for his architectural water colors and his contributions to typography.
On March 10, 1934, The New York Sun reported, "The exhibition of Edwin H. Denby, A. I. A., comprising water colors of architectural subjects, will remain open to the public during the months of March and April in the gallery adjoining his office at 333 Fourth avenue."  He also developed and designed his own type fonts and styles.  In 1940, his book Catalog of Enorm Type Slotted to Interlock for Better Spacing was published, and two years later his Lincolniana, and Various Display Prints in Denby Type appeared.  Denby still worked at his studio here when he died on January 17, 1957 at the age of 84.
Two years later Fourth Avenue was renamed Park Avenue South.  The building saw a variety of tenants over the succeeding decades.  In 1970 the American Computer Institute operated from an upper floor, while Antenna, a unisex hairdressing saloon, occupied the third floor.
On August 12, 1971, Angela Taylor wrote in The New York Times, "The current 'in' shop is Antenna...It's a spacious, airy arrangement with brick walls, a polished wood floor, and lots of greenery in pots and hanging baskets.  The outdoor effect is emphasized by the shop's own zoo: a pair of large turtles that lumber around freely, snakes, frogs and lizards in glass cages, plus three whippets and a huge black cat."  The reputation of Antenna was such that one customer traveled from San Francisco every six weeks for a styling.  He told Taylor, "It's a long way to come for a hair cut, but I don't let anybody else cut it." 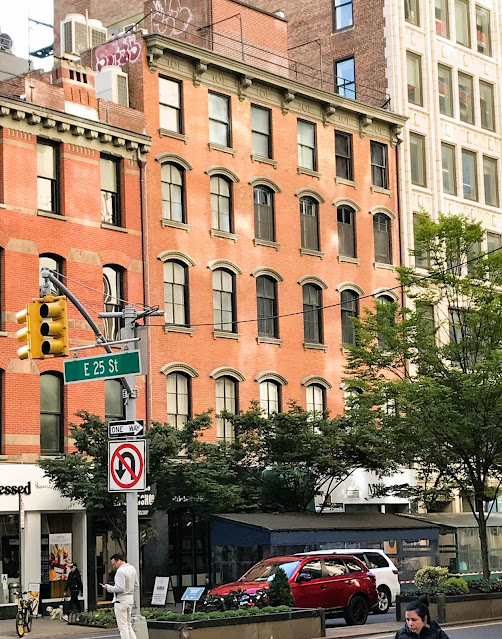 The last years of the 1970's saw apartments mixing with offices in the upper floors.  The building was converted to co-ops in 1981.  Above the modern storefront today, the structure looks much as it did in 1887 when Louis C. Tiffany moved his new company in.
photograph by the author
LaptrinhX.com has no authorization to reuse the content of this blog
Posted by Tom Miller at 1:00 AM