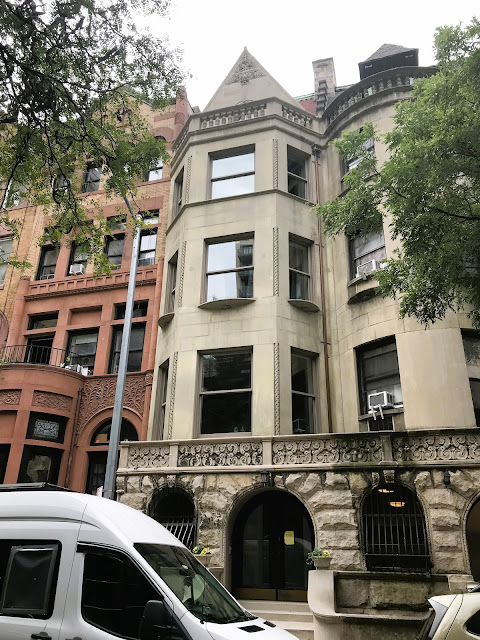 In 1891 architect Clarence Fagan True designed a group of seven homes for developer Francis M. Jenks that wrapped the southeast corner of West End Avenue and West 77th Street.  True drew heavily from historical styles; but he preferred to adulterate them with his own liberal interpretation.  Often melding two or three styles into an attractive and sometimes playful concoction, he produced mansions and townhouses that managed to be at once elegant and fanciful.
He designed this group in three parts--four high-stooped homes on the avenue, a massive corner mansion, and two low-stooped, or American basement, houses on West 77th Street.  The eastern-most house, 270 West 77th Street, was the little brother of 272.  True designed the residences as a unified pair, but 270, at 17-feet-wide, was 11 feet narrower than its fraternal twin. 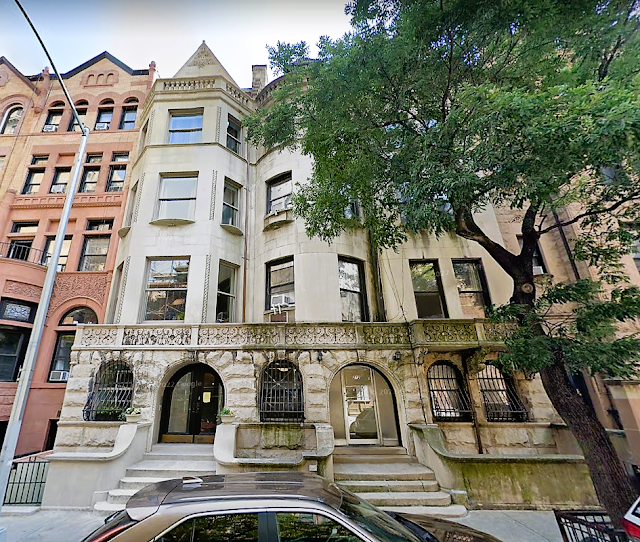 270 West 77th Street is a fraction of the width of its commodious neighbor to the right.
The arched, double-doored entrance sat above a five-step stoop.  The Romanesque Revival base faced in chunky, undressed stone abruptly changed style with a richly carved Elizabethan frieze.  Above it, the smooth-faced limestone facade formed a three-faced bay with spiral moldings at the corners of each floor.  A stone balcony fronted the pointed gable at the mansard level.
Frederick W. Lewis and his wife Maggie purchased the house on January 5, 1893.  A diamond and pearl dealer, he was the head of Fred. W. Lewis & Co. at 1 Maiden Lane.  His business was not in finished jewelry, but in the importing, cutting and polishing of the gems.
Following Frederick Lewis's death in 1905, Maggie sold the house, and on May 10, 1906 liquidated the furnishings at auction.  It seems that her husband had left her in financial straits.  It was common in the 19th and early 20th centuries for well-do-to families who were relocating to sell off the furnishings and start over.  But Maggie also sold off what the auction notice called "the Family Jewels."  Considering that her husband had been a high-end dealer, Maggie's collection was enviable, appraised at "over $25,000," or more than $775,000 in 2022.  The listing said:

She sold the house to J. Louis Schaefer, president of the Grace National Bank and a vice president of the W. R. Grace Company.  As an interesting sidenote, when World War I broke out in Europe, trapping hundreds of traveling Americans, J. Louis Schaefer hired a steamship company to bring home Americans stranded in Italy.  Before then Schaefer had left 270 West 77th Street, selling it in September 1911 to the estate of James C. Miller.
Mary Emma Miller was James's widow.  That her late husband's estate purchased the property was most likely the idea of her son, Adna H. Miller.  He had been a partner with his father in the real estate and developing firm J. C. Miller & Son.  Adna now ran the company on his own.
Adna and his brother James Calvin, Jr. moved into the house with their mother.  A mover and shaker within the real estate community, Adna was regularly involved in property deals.
Mary Emma died in the house on the evening of March 26, 1918.  Her funeral was held in the parlor four days later.
James Calvin Miller remained at 270 West 77th Street at least through the mid-1920's.  By 1937 Emery C. Cochran was living here.  A high school teacher, Cochran's quiet life gave little hint of his impressive past.  During World War I he had served as the  War Department's chief military censor.  Cochran remained in the house for a full decade.
At mid-century 207 West 77th Street was being operated as a rooming house.  Not all the tenants were especially upstanding.  Living in Apartment 2 was Doris Garcia.  She became a part of a Congressional Hearing on Juvenile Delinquency on July 14, 1955.
A New York detective testified about the arrest of William John O'Connell, a 29-year-old electrician charged with possessing pornographic films.  In his possession was "this little black book" in which investigators found "many names, addresses and telephone numbers of girls in New York City."  Among them was Doris Garcia.  Questioned, O'Connell "stated that this girl was a call girl; that he met her at the Hotel Peerless." 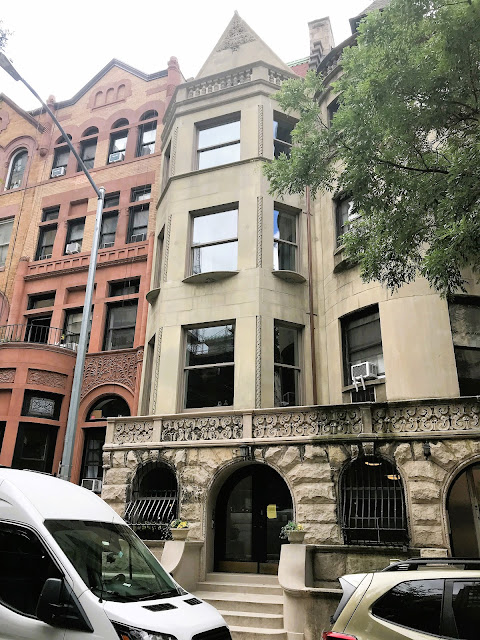 A renovation completed in 1980 resulted in a total of seven apartments.  Then, in 2000, the former Lewis house became the Country Inn Bed & Breakfast.  It operated until 2018, at which time 270 West 77th Street was returned to a single-family home.
photographs by the author
LaptrinhX.com has no authorization to reuse the content of this blog
Posted by Tom Miller at 1:00 AM