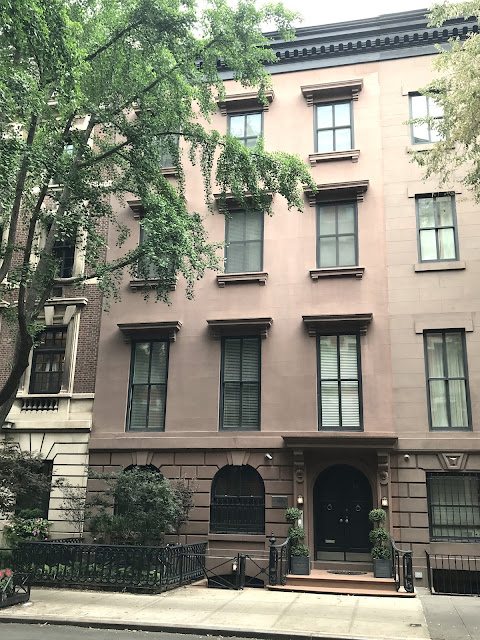 In 1854 publisher and developer Thomas W. Strong completed a row of up-to-date, Anglo-Italianate rowhouses on  the north side of West 9th Street, between Fifth and Sixth Avenues.  Among them was 35 Ninth Street (renumbered 47 West 9th Street in 1868).  At 28-feet wide and four stories tall, the brownstone-faced residence was intended for an affluent owner.  The openings of the ground floor sat within a rusticated base, just one step above the sidewalk.  A prominent cornice upheld by scrolled brackets protected the double-doored entrance.  The motif was carried to the upper floors, where the windows wore especially prominent lintels supported by brackets.  A pressed metal, corbel-patterned cornice ran the length of the row.
The house became home to attorney and politician Ogden Hoffman.  Born in 1794 the son of New York Attorney General Josiah Ogden Hoffman and Mary Colden Hoffman, he had graduated from Columbia College in 1812.  His wife, Virginia Southard, was his second.  He had had two children with his first wife, Emily Burrall, and three more with Virginia.
Juggling law with politics, Hoffman had been a member of the New York State Assembly in 1826 and 1828, and was a United States Congressman from 1837 to 1841.  The year he moved into the 9th Street house, he was appointed State Attorney General.  (His son, Ogden Hoffman, Jr. was a United States district Judge in California at the time.)
In September 1855, he sent a letter to the editor of The New York Times in which he effectively stepped away from politics.  It said in part, "I do not desire, and will not under any circumstances accept from any State Convention of any party, the nomination of the office of Attorney General, or any other office." 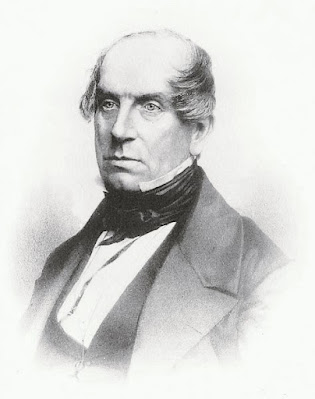 Ogden Hoffman.  via Genealogy of the Hoffman Family, 1899 (copyright expired)
On April 27, 1856 Hoffman fell ill.  Five days later he died in the 9th Street house "of congestion of the lungs," according to The New York Times.  His funeral was held in the Church of the Annunciation on 14th Street on May 3.  The New York Herald wrote, "The church was densely crowded with an audience which, for respectability, wealth, talent and position, is seldom called together, even in this great city."
The 9th Street residence was next home to the Francis Leland family.  A merchant at 33 Broadway, on March 12, 1856 he took on the additional responsibility of president of the New York County Bank.  In reporting the appointment, the New York Herald called Leland, "one of our most successful merchants."
The Leland residency was relatively short-lived.  In 1863 Abby Van Rensselaer was operating 35 Ninth Street as a high-end boarding house.  Among her boarders were was William Augustus Hooker, a sophomore at Columbia University, and William Keefe and his wife.  The residents endured a horrible incident on the New Years Day, 1864.
That evening, three men drove up to the house in a wagon.  Apparently believing they were looking for rooms, a servant brought them in.  The New York Times reported that they "were very politely treated."  But it soon became apparent that the men were "much intoxicated" and after a short time, "they began to offer insult to Mr. K.'s wife."  The article said that both Mrs. Keefe and her husband "remonstrated in the strongest terms against this breach of hospitality," and when William Keefe asked them to leave, they became irate.
One of the men drew a revolver and shot Keefe in the chest.  The trio ran from the house, into the wagon and escaped.  Keefe was taken to Bellevue Hospital where his physicians said "he cannot recover from the effects of the wound."
Around 1870 Charles C. Reed, head of the varnish-making firm Charles C. Reed & Co., and his wife, Mary E. Reed purchased the house.  His office was on Chatham Street and his factory was in Brooklyn.   As was common, the Reeds took in a boarder.  They unwittingly harbored a fugitive in 1877 in W. W. Norton, Jr.  On September 17, 1877 wealthy attorney McKendrick W. Jones had returned from Europe to discover his mansion on East 43rd Street had been stripped of more than $30,000 in "valuable furniture and pictures," according to The New York Times.  The amount would equal more than $800,000 today.  Newspapers called the crime "the Great Furniture Robbery."
Involved in the heist, along with mastermind Seabrooke Purdy and two others, was W. W. Norton.  He had shared a rented room at 7 Washington Place with Purdy, but shortly after the crime was discovered, they went into hiding.  The New York Times, on December 18, said, "About a week after Purdy's disappearance, Norton left Mrs. Covell's and took up quarters at No. 47 West Ninth-street."  It was Norton's over confidence that resulted in his arrest.  Certain that his appearance was unknown, he walked into police headquarters on the afternoon of December 17, 1877.  Seeing two detectives in plain clothes and assuming they were private citizens, he approached and asked, "Is there anything new in the Purdy case?"  He was immediately recognized and taken in to custody.
Charles Reed attempted to increase his fortune with investments, most notably backing the Hobenstein Manufacturing Co.  Unfortunately for Reed, that business failed and the banks came after Reed.  On March 12, 1890 the Paint, Oil and Drug Review reported that Reed's firm had been placed in receivership.
Reed managed to retain ownership of 47 West 9th Street until April 1894, when he sold it to Louis and Mary M. Greenhut.  Greenhut was a member of the law firm Townsend & Dyett.  As had been the case with Ogden Hoffman, Greenhut's residency would be unexpectedly cut short.  On April 17, 1895, the 40-year-old "was stricken with apoplexy at his home, No. 47 West Ninth street," according to The Press.  The term referred to what we today call a stroke.  The article called him, "a New Yorker by birth and well known in legal circles.  He leaves a widow."
Seven months later, Mary M. Greenhut sold the house to Maria A. del Rio for $45,000 (about $1.5 million in 2022).  Maria maintained a home in her native Havana, Cuba.  Also living in the house was her mother, Alice M. Crosby, and two Irish maids, Katherine M. and Mary E. Sullivan (who were possibly sisters).  Maria had an adult daughter, Edith M. Greene, who lived at 1 East 83rd Street.
Maria lived quietly here with her mother, never appearing in the society pages.  She was in Atlantic City, New Jersey when she died on October 17, 1917.  She left an estate equal to nearly $11 million today.  Alice M. Crosby inherited the house, along with "the income of half the residuary estate."  Maria had been extremely generous to her "faithful maids."  Katherine  and Mary Sullivan shared a $10,000 bequest--about $105,000 each today.
With war raging in Europe, the following year, on November 11, 1918, the New-York Tribune reported, "Mrs. A. M. Crosby has offered her home, at 47 West Ninth Street, to the War Camp Community Service as a club for army and navy officers."
Following the war, on April 21, 1920, Dr. Henry Harlow Brooks purchased 47 West 9th Street from the Del Rio estate for $42,500 (around $575,000 in today's money).  Living with Brooks and his wife, the former Louise Dudley Davis, were their daughters, Ruth Walker Brooks, and Laura and her husband John P. Duryee. 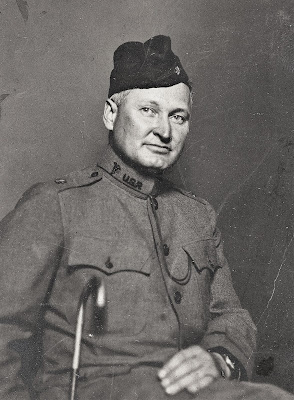 Dr. H. Harlow Brooks in his World War I uniform.  image via swanngalleries.com
Both Harlow (he did not use his first name professionally) and Louise were well-known in the medical and research communities.  After graduating from Byrn Mawr College in 1896, Louise had been working as a bacteriologist in the City Health Department when she met Harlow.   The couple was married in 1896.  The New York Times later commented that she "afterward was actively identified with the research work he conducted."
Among Harlow's scientific contributions was the discovery of the Welch Bacillus with Dr. William H. Welch in the early 1890's.  The New York Herald explained it was "also known as the gas gangrene bacillus."
In 1929 the famed French physicist Madame Curie was in New York.  On November 7, the New York Evening Post reported that her "visit to this country has been a long defense against illness threatening her because of fatigue."  That day was her 62nd birthday, and the newspaper said, "Mme. Curie rested quietly and received those of her intimate friends her physician, Dr. Harlow Brooks, of 47 West Ninth Street, would allow.  Upon the advice of Dr. Brooks, the French woman scientist refused to grant interviews."
On April 12, 1936, The New York Times reported, "Dr. Harlow Brooks, diagnostician and consulting physician to seventeen hospitals in the metropolitan area, is seriously ill at the Doctors Hospital."  Brooks had been in Miami, Florida on a consultation when he was taken ill with what he self-diagnosed as the grippe (today called the flu).  An infection developed before he returned to New York.  A group of five renowned physicians, including Alexander Lambert, the personal physician to the Theodore Roosevelt family, tended to Brooks.  The New York Times said, "A crisis is expected in Dr. Brooks's condition some time this morning."
As it turned out, Brooks was not suffering from influenza.  Two days later The Herald Statesman headlined an article, "Bacillus He Isolated In 1890's Ends Life of Dr. Harlow Brooks."  The Welch Bacillus had caused the infection resulted in his death at the age of 65.  In reporting his passing, The Herald Statesman called him "one of the most eminent physicians and diagnosticians in the nation."
Brooks's funeral was held in the Church of the Ascension on Fifth Avenue and 10th Street.  A military honor guard escorted the flag-draped coffin from the 9th Street house to the church, which was "crowded by more than 1,000 persons, many of whom stood through the ceremony," according to The New York Evening Post.
Brooks left an estate estimated at $8.35 million in today's money.  Laura's husband, John, had died in 1923, and she died on June 6, 1937, before her father's estate had been settled.  Louise inherited the real property, including the 9th Street house and the country residence, and she and Ruth shared equally in the remainder.
By the time of her father's death, Ruth Walker Brooks had become an accomplished portrait sculptor.  She was also engaged in "tracing the migration of Indians throughout the world," according to The New York Times.  When Brooks died, she was on her way to British Guiana as a member of a New York Zoological Society expedition.  On January 30, 1937 Louise announced Ruth's engagement to Kenneth Landers Hoffman, an attorney.
Louise lived on at 47 West 9th Street until her death on December 12, 1941 at the age of 69.  Her funeral, too, was held in the Church of the Ascension.
The Brooks estate sold the house to Turner F. Currens in September 1943 for $19,500, or about $305,000 in 2022.  An 1898 graduate of the St. Louis College of Pharmacy, Currens was a retired vice-president of the Norwich Pharmacal Company, and assistant treasurer of Columbia University's College of Pharmacy. 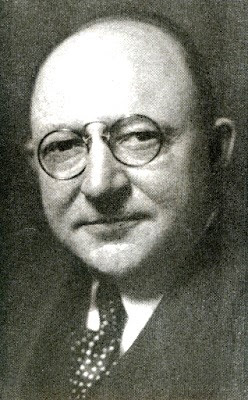 Turner F. Currens, Norwich Percolate, January 15, 1935.
Currens reconfigured the house into apartments, one per story.  He and his wife lived in one of them.  As had been the case with owners twice before, Currens would not live long in the West 9th Street home.  He died in St. Vincent's Hospital at the age of 67 on May 24, 1945.  His wife moved to Mahwah, New Jersey before 1968. 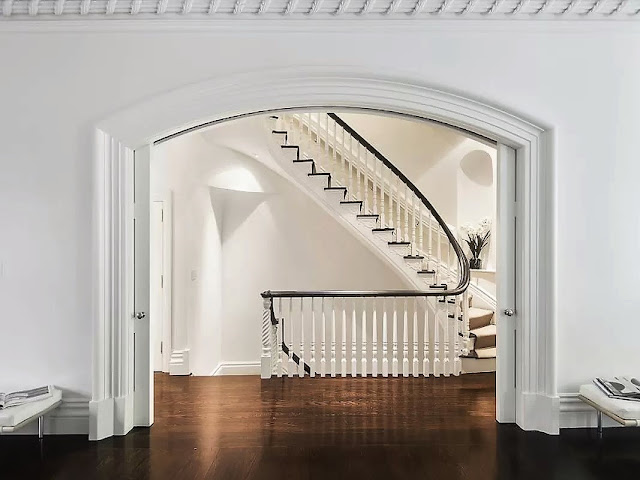 Many of the 1854 details survive.  via streeteasy.com
The property was sold in 2008 for just under $13 million and the owners initiated a two-year renovation that returned it to a single-family home.  It was placed on the market in 2016 for $22 million.  The listing touted, "six bedrooms, seven full bathrooms and six half baths" and "an abundance of fireplaces, tons of original details, a 1,000-bottle wine cellar, and handy staff quarters." 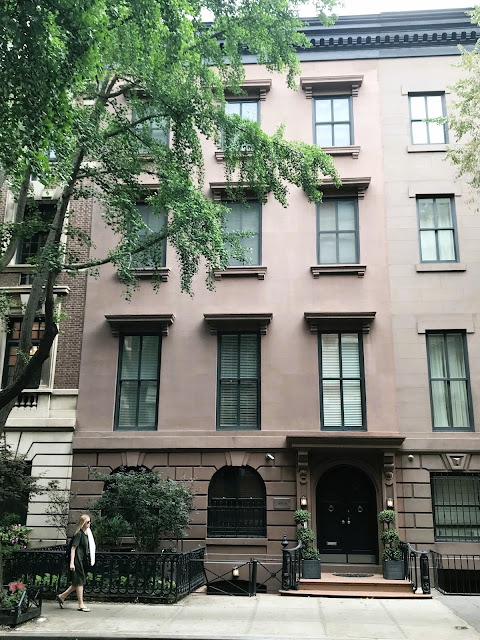