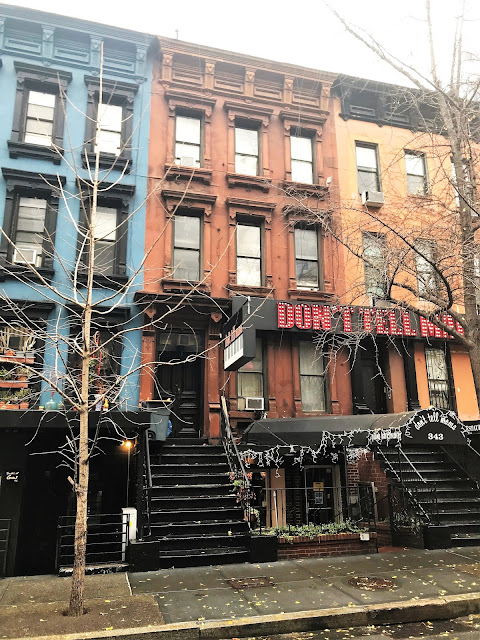 John Livingston was a prolific real estate developer in the late 19th century, the Record & Guide calling him "one of our oldest and wisest builders."  On January 12, 1884 he announced his intentions to erect a row of "stone front private dwellings" along the north side of West 46th Street, between Eighth and Ninth Avenues.  The following month Frederick T. Camp filed plans for nine "three-story and basement brown stone dwellings," each to cost the equivalent of $315,000 in 2022.

The identical, brownstone-fronted homes were completed in December 1884.  Camp had designed the 19-foot-wide houses in the neo-Grec style.  The architrave stone frames of the windows were miniature versions of the entrances.  Geometric brackets with incised decorations upheld pronounced molded cornices.  The corbels of the terminal cornices with paneled friezes carried on the motif of the openings below.
Ten months after their completion, two of the nine houses were still unsold.  Livingston's advertisement in October 1885 suggests he was eager to find a buyer.  "Attention--Substantial new dwellings, 343, 345 West 46th st.,; hard wood; extra plumbing; airy cellars; low prices; easy terms."
William B. Keller, founder of the publishing firm W. B. Keller & Co., purchased 345 West 46th Street.  Born in Kellersville, Pennsylvania, he and his wife had a son, William, Jr.  In the 1870's he was the first publisher in New York to install linotype machines.
When the family moved into 345 West 46th Street, Keller was embroiled in a serious legal battle.  His firm published the National Bottlers' Gazette, a trade monthly.  One of his regular advertisers was John Matthews, known popularly as the "soda water king."  The New York Times reported on October 27 that "whenever mention was made of the firm in that paper the Messrs. Matthews were very highly spoken of."
But in June 1885, Matthews stopped advertising in the National Bottlers' Gazette.  After that, said Matthews's legal complaint, "in each publication, disparaging and libelous notices of the Messrs. Matthews appeared."  Not only did Matthews sue Keller for more than a dozen instances of libel, but on October 23 he had Keller arrested.
Keller advertised the 46th Street house for sale in January 1891.  The ad pointed out that it sat within a "restricted and select block," assuring the prospective buyer that no commercial incursion was allowed on the block.  Keller's advertised price was $20,500, or about $602,000 by today's conversion.
It was purchased by another publisher, Thomas Jolly and his wife, Helen L.  The couple's residency would be relatively short, and in October 1897 they sold the house to Julius and Adelaide Dietz.  Julius Dietz was the principal in the Central Market Co., a large meat market on 48th Street between Broadway and Seventh Avenue.  The couple had four children, Walter E., Ida A., Carolyn M. (known as Carrie), and J. Herbert Dietz.
Walter was the first of the Dietz children to marry.  His engagement to Dorothy Marian Vail was announced in November 1914.  The Sun mentioned that the bride-to-be, "who lived in Tuxedo for some time, is proficient as an amateur dancer and has taken part in many entertainments given by young people."  Three years later, on April 15, 1917, the Dietzes announced the engagement of Ida to Dr. Charles A. Gomer.
By the time of Ida's wedding, the West 46th Street block was no longer restricted.  The once refined tenor of the neighborhood was being tarnished by the intrusion of commerce.  In November 1920, Julius Dietz moved his family to 958 Madison Avenue.  (He paid for that house with "a meat market," according to the New-York Tribune.)
The Dietzes' removal signaled the end of 345 West 46th Street as a private home.  It became a boarding house, and among its first residents was Beatrice Towers.  She advertised "piano instruction; adult beginners, children."  Not so upstanding was John Williams, alias Patrick Hoey.  The 22-year-old was arrested on May 25, 1921 on the complaint of a baker, Antonio Palski.  According to Palski, Williams followed his delivery boy and as he delivered fresh-baked bread to customers.  When the boy dropped off the bread, Williams would steal it.
By 1927 board was no longer offered in the house.  Now a rooming house--without the amenity of meals--it was run by Mrs. Francis Hyland.  Among her roomers was 72-year old Frank W. Mumford, a holdover of the original tenants after the Dietzes moved out.  He had worked for the Remington Typewriter Company in its mechanical department since 1902.
On the afternoon of October 26, 1927, Francis Hyland went to Mumford's room to make up the bed.  The door was locked, and so she used her passkey.  She found the elderly man dead on the floor.  The New York Sun reported, "While searching Mumford's effects the police found $2,500 in cash."  That would translate to more than $37,000 today.
As was happening with many other homes along the block, the basement of 345 West 46th Street was converted to a restaurant, run by Joseph Lany.  In 1928, Grover Aloysius Whalen was appointed Police Commissioner by Mayor James Walker.  The strict enforcement of Prohibition was perhaps his main focus.  His stance was clearly revealed in an address to the Rotary Club at the Waldorf-Astoria on April 5, 1929.  The New York Times wrote:

Police Commissioner Whalen blamed prohibition for the increase in crime in this city, declared there were 32,000 'speakeasies' in New York, warned against the 'hostess problem' which is 'verging on vice conditions that were wiped out years ago,' and scored 'sob sister' judges who criticize police strong-arm tactics against criminals.

Four months earlier, on January 2, Whalen had unleashed an army of police officers to conduct raids.  They had orders to "treat 'em rough," according to the Standard Union.  Whalen instructed the officers to wreck the "dangerous speakeasies and places which breed crime."  Among them was Joseph Lany's place at 345 West 46th Street.
Following the repeal of Prohibition, the basement space became home to John Baccialon's restaurant, Lou Jean's.  He happily obtained his liquor license in October 1934.
In the meantime, the upper portion of the building was still being operated as a rooming house.  A month before Lou Jean's got its liquor license, a roomer, Anthony Nino, was arrested.  He, Cal Schmitt, and Joseph Quinalan had been robbing men in the Times Square district by impersonating undercover officers, accusing their victims of loitering or some other minor crime, and accepting bribes to avoid arrest.
It backfired on September 10, 1934.  That night Quinalan and Schmitt approached Joseph Downey and William Conroy, while Nino stood nearby as a lookout.  According to Downey, the two said, "We're police officers.  What are you doing here?"   Quinalan displayed a fake police shield, then turned to Schmitt and said, "What'll we do with them, sergeant?"  The problem for the pair was that Downey and Conroy were undercover detectives.  All three were arrested.  Anthony Nino was lucky enough to return to his furnished room at 345 West 46th Street that night, since he had not technically been involved.
The basement level was home to a series of restaurants over the subsequent decades.  In 1970 Danny's jazz club was here, followed by Mr. Mike's Italian restaurant, run by Mike Macario, here by 1976.  The following year Parkway, an Indian restaurant opened, and around 1980 the American restaurant, Mildred Pierce occupied the space.  It was replaced by Maison Brasil toward the end of the decade.
And then, the well-known piano bar/theater Don't Tell Mama opened in 1989, combining the basement spaces of 345 and 343 West 46th Street.   It was a popular destination for decades, known for its singing bartenders and waiters.  In 2008, the owners moved Don't Tell Mama to Las Vegas, seemingly ending a chapter in the history of what had become known as Restaurant Row.  Happily for theater goers, the restaurant recently reopened.
photographs by the author
LaptrinhX.com has no authorization to reuse the content of this blog
Posted by Tom Miller at 1:00 AM