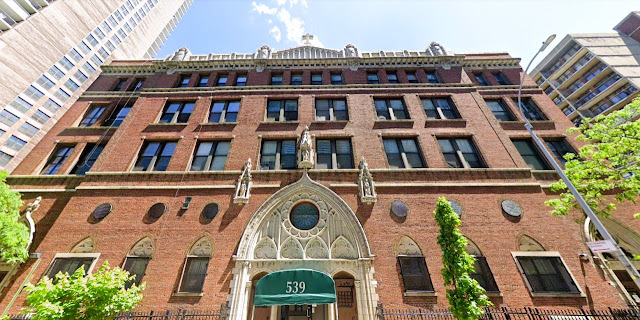 photograph by frog17
The parish of the Church of St. Ambrose was established in 1897 in the impoverished and crime-ridden Hell's Kitchen neighborhood.  Among the parishioners were elderly sisters of whom the New-York Herald said, "It was understood that the two sisters are living in the most humble circumstances, that they have known hard work and few luxuries all their lives."  Their "humble circumstances" could well have changed in 1911 when they received an unexpected inheritance of $60,000--nearly $1.8 million in 2022.  Instead, explained the article, "they instantly decided they would try to do the greatest amount of good with it.  To that end they gave it to St. Ambrose's Church, which ministers mostly to the less prosperous class on the west side."
The Rev. Peter F. Guinevan and Cardinal John Murphy Farley put the windfall towards erecting a new church and school building at 539-547 West 54th Street, on the same block between Tenth and Eleventh Avenues as the original structure.  Until now, St. Ambrose had been unable to afford a school.  In June 1911, architect John V. Van Pelt filed plans for a four-story "brick and stone church, school and rectory" to cost the equivalent of $3.68 million today--just over twice the amount of the sisters' donation.
Construction progressed rapidly, and on September 4, 1911 the cornerstone laying ceremony was held.  The New-York Tribune reported that the event took place "In the presence of five thousand persons," including "about one thousand children who will attend the new school."
The article explained, "There is to be an auditorium in the basement which will seat one thousand.  The main floor will be used as a church, while the two floors above will be taken up by the new parish school." 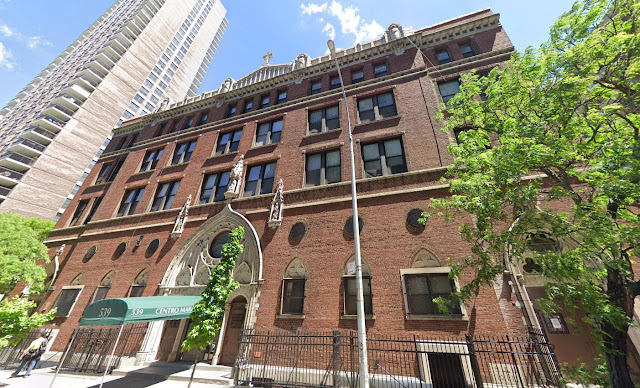 During the dedication ceremony on December 15, 1912, Cardinal Farley revealed the munificent gift of the sisters.  The New York Herald reported, "They wished no credit and no praise for their act of self-denial, and Cardinal Farley and the rector of the church announced they would respect those wishes."

Van Pelt's design was unquestionably more school than church.  Faced in red brick, he gave a nod to the ecclesiastical purposes of the structure with a striking, two-story Gothic-style entrance executed in white terra cotta.  A  circular stained glass window hovered above the doorway.  Other Gothic elements were peppered across the facade, including a statue of St. Ambrose within a terra cotta niche and canopy.  A paneled, terra cotta parapet surmounted by a cross crowned the structure. 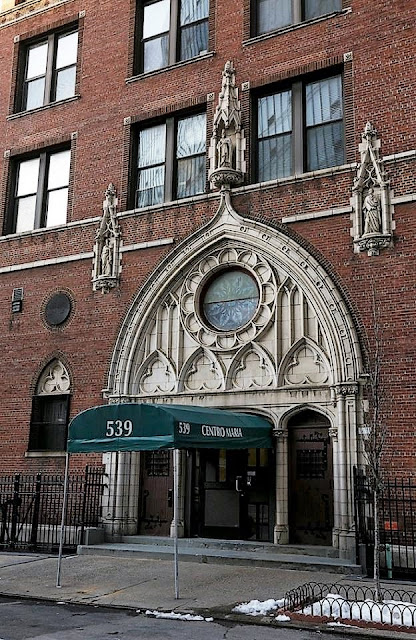 photograph by frog17
The youth within the parish of St. Ambrose faced severe challenges.  Most were working by their teen years, and carrying weapons was a near necessity for self defense in the gritty neighborhood.  Sixteen-year-old Albert Squillanti worked as a piano varnisher on the fifth floor of the Standard Pneumatic Action Company on West 52nd Street.  On November 24, 1913, according to The New York Times, he "needed an empty bottle and went down to the fourth floor."  There 19-year-old William Bartes was assembling piano parts.  "When Squillanti asked him for a bottle he answered him roughly."  A confrontation followed, during which Bartes pulled out a blackjack and struck Squillanti.
The blow was not enough for the older boy.  He waited outside the factory after work.  When Bartes emerged, he renewed the argument and struck Squillanti on the chest.  The New York Times reported, "Squillanti stepped back a foot or two, drew a small revolver from his coat pocket, and fired once.  The bullet went straight to Bartes's heart and he dropped dead on the sidewalk."
Squillanti fled, but was soon overtaken and brought to the same drugstore at 52nd Street and Eleventh Avenue where Bartes's body had been taken by his father (who worked in the same piano factory).  Someone ran to the Church of St. Ambrose and retrieved Father Moran.  The New York Times said that Squillanti first talked to the priest, then made a full confession to detectives.  He later led them to a pile of railroad rails on 54th Street where he had hidden his gun.
The church was the scene of two heartbreaking ceremonies on the same day, September 9, 1920.  With no parks nor playgrounds available to them, Hell's Kitchen children played in the streets.  Two days earlier, six-year-old Jimmy Wylie and eight-year-old Howard Schuman, who lived in the same tenement building at 600 West 55th Street, were among a group of children playing at 55th Street and Eleventh Avenue.  Suddenly a car "plunged" into the children, killing Jimmy and Howard.
Both funerals were held in their apartments, spaced apart so that children and other mourners could attend both.  The first was that of Jimmy Wylie.  Following the funeral, his casket was carried to the Church of St. Ambrose for a requiem mass, "while all the neighborhood stood by in reverence," said The Evening World.  Six former playmates, from seven to ten years old, acted as pallbearers, "in dark suits, with wide white collars and white gloves."  The newspaper said that along the route, "truck drivers stopped and bared their heads.  Many women along the line wept without concealment of their grief."  At the church, the children were permitted to pass by the coffin for a last look at their playmate.
One hour later, the entire process was repeated for Howard Schuman.  The Evening Telegram reported that "nearly a thousand boy and girl school chums" marched behind the coffins during the processions and "thousands of mothers, vengeful fathers and sobbing playmates and school chums, lined the streets leading from their homes to the Roman Catholic Church of St. Ambrose."
The parish of St. Ambrose disbanded in 1938.  Renovations to the building to convert it for the Mount Carmel Home for the Aged and Infirm were completed in 1951.   It opened with 80 residents, and not long afterward was inspected by the Mayor's Advisory Committee for the Aged.  Dr. Alexander W. Kruger informed reporters that medical care was provided by St. Clare's Hospital, and the home's chaplain, Msgr. John J. Voigt and its "superior," Mother Bernadette de Lourdes, stressed "the importance of a homelike atmosphere."
The name of the facility was modernized to the Mount Carmel Nursing Home around 1970.  It operated here for three decades, closing for substantial renovations in 1981.  Sister Christina Lopez entered the vacant building that summer to check the premises, only to make a macabre discovery.
On June 26, 1981, The New York Times reported, "The burned and battered body of a teen-age girl who had been missing since Friday was found yesterday afternoon in the basement freezer of a closed nursing home only a block away from her midtown Manhattan home."  It is unclear whether the murderer of 14-year-old Debra Stewartson was ever found.
The renovations resulted in Centro Maria, a residence "where the Religious Sisters of Mary Immaculate look out for young women new to the city," as described by Nancy Beth Jackson in The New York Times on September 22, 2002.   Once relatively common in Manhattan, residence hotels for unmarried women were somewhat of a rarity by the turn of the 21st century.  Staffed by nuns, Centro Maria charged its residents a few hundred dollars a month, for which they also received two meals a day.
But what became home and safe haven for the young women came to an abrupt end in 2020.  The Archdiocese of New York issued eviction notices to the residents effective August 31 that year.  One of the women called the decision "a gut punch." 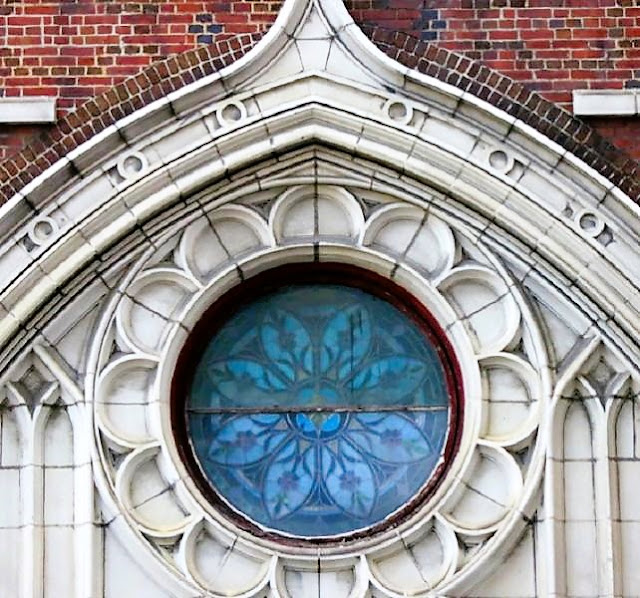 photograph by frog17
The Archdiocese sold the property in January 2022 to the Excel Development Group.  Although specific plans for the redevelopment of the site have not been finalized, a demolition permit has been issued and the architectural details--like the terra cotta ornamentation and the stained glass--are already being advertised by the architectural salvage firm Demolition Depot.
no permission to reuse the content of this blog has been granted to LaptrinhX.com
Posted by Tom Miller at 1:00 AM