The Lost Relic at 202 Spring Street 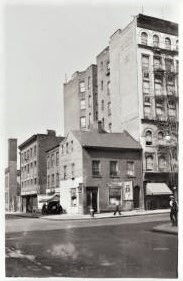 from the collection of the New York Public Library
On October 20, 1852, an advertisement appeared in the New York Morning Courier that offered:  "Grocery Stock--At 10-1/2 o'clock, at No. 202 Spring street, corner of Sullivan, will be sold without reserve, the stock and fixtures of a large grocery store; also, liquors; the lease of the premises, a valuable horse and wagon, &c."
The frame building in which the grocery had operated had been built about two decades earlier.   A "center chimney" house-and-store, its graceful arched residential entrance was typical of the Federal style.  While the Sullivan Street side was clad in clapboards, the Spring Street facade was faced in more expensive brick.
Jackson B. Shreve, who lived a few blocks away at 31 Renwick Street, purchased the grocery store.  Rebecca Kennedy, the widow of Patrick Kennedy, lived in the upper portion of the building, taking in two boarders, William B. Brown, a driver, and importer Charles Klett.
By 1860 Irish immigrant Patrick J. Burke had converted the grocery store to a saloon.  He and his wife, Anne Terressa, now lived in the upper portion.  It was one of three saloons Burke owned, the others at 185 Prince and 40 Laurens Street (later West Broadway).  Tragically, Anne died of consumption--the then-current name for tuberculosis--four days before Christmas that year, at the age of 27.  The funeral was held in the house.  In reporting her death, the New York Herald noted, "Dublin papers please copy."
In 1863 Burke sold the saloon to John Caldwell, who ran a second saloon on James Street.  Five years later, he sold the operation to Dunigan & Devlin, operated by Irishmen William H. Devlin and John Dunigan.  They quickly ran afoul of the law.  On November 5, 1867 John Dunigan was arrested "for not keeping his place closed on Sunday," according to the New York Herald.  The judge held him on $300 bail--nearly $5,500 today.
A back room of the saloon was used for meetings, and one of them got out of hand on June 8, 1871.  The New York Herald reported that during a "republican enrollment," there was a "general scramble at the meeting in question, and that oaths and chairs were very freely thrown around, and that the general instructions given to hit a head wherever they saw one was very implicitly obeyed."
Two men, Theodore Allen and William P. Burke, were arrested for felonious assault.  The judge imposed a massive bond, equal to $220,000 in today's money, which, understandably, the defendants could not raise.  Despite his ability to inflict bodily injury, Burke was suffering from tuberculosis, and the New York Herald said he was brought into the courtroom "looking more like a corpse than a human being."  Given his medical condition, it was suggested that bail be reduced.  "Justice Cox promised to consider the matter," said the article.
In the meantime, the upstairs boarders continued to be working class.  In 1873 they included dressmaker Emma Gebelin, laborer Robert Madine, and Eugene Miroy, a driver. 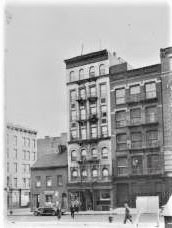 from the collection of the New York Public Library
William L. Becker installed his drugstore in the former saloon space in 1878.  It would remain a pharmacy for decades.  It was home to Henaro's Drug Store on the afternoon of January 11, 1905, when fire broke out at 3:45.  It resulted in about $3,000 in damages by today's standards.
Among the tenants living above the pharmacy in 1907 were the Grosso family.  Their 18-year-old son, John, and a friend attracted the attention of a policeman on December 21 that year, as he carried two silk gowns down Fifth Avenue.  Grosso explained that "a tailor friend of his had no means wherewith to celebrate Christmas, and that he was trying to dispose of the dresses," according to the New York Herald.
At the station house, however, the teens confessed that they had stolen a total of four gowns from A. J. Frank & Co.--two of which they had sold to tailor Samuel Wintergarten for $7 each.  The dresses had cost A. J. Frank & Co. $80 each.  John Grosso spent his Christmas in jail. 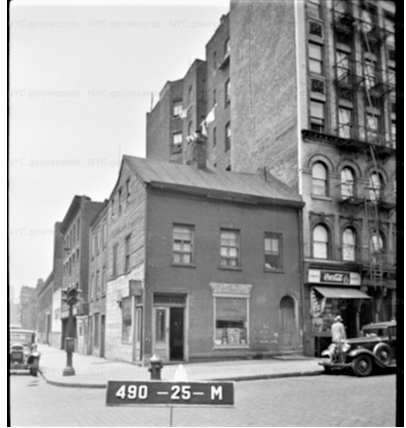 The more than century-old structure was remarkably little changed in 1941.  via the NYC Dept of Records & Information Services
In October 1919 it appeared that the end of the line for the venerable little building was near.  That month The 202 to 206 Spring Street Company, Inc. was formed "to take over the two and a half story frame and five and six story brick buildings," said The Sun.  If the new owners intended to replace the structures with a modern building, they changed their minds.  Instead, the upper floors were altered to office space.  Among the initial tenants was the office of the New York Pie Baking Company, the bakery of which was a block away at 82 Sullivan Street.
The ancient anachronism managed to survive until 1954, when it was finally razed for a parking lot.  A seven-story apartment building, built in 2001, occupies the site today. 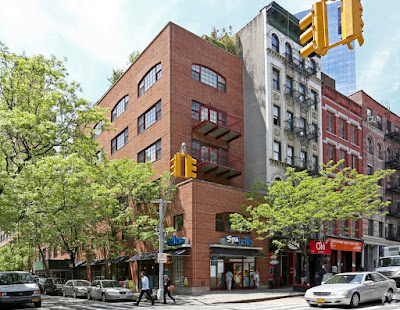 image via apartments. com
LaptrinhX.com has no authorization to reuse the content of this blog
Posted by Tom Miller at 1:15 AM