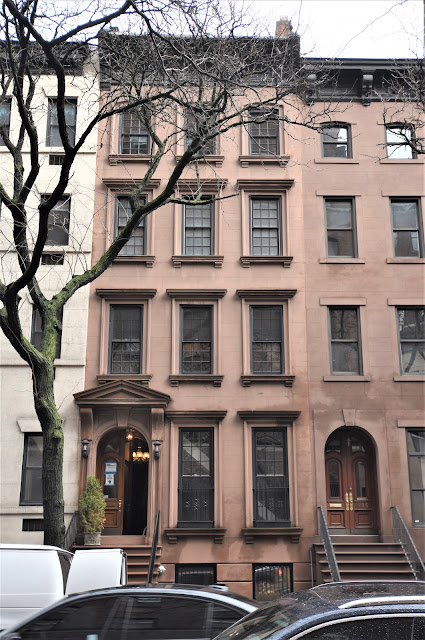 In 1861 the family of William H. Wood lived in the newly-built brownstone house at 128 East 31st Street (renumbered 233 in 1868).  The 20-foot-wide, four-story house was designed in the popular Italianate style.  Above the high stone stoop, the arched entrance was crowned with a classical pediment.  Floor-to-ceiling windows added drama as well as light and ventilation into the parlor.  The openings of the second and third floors, sitting upon bracketed sills, wore pronounced molded cornices, while the simpler architrave frames of the top floor windows were gently arched.
On June 19, 1865, the Woods' eldest daughter, Annie A., was married to Alexander Pollock.  Almost a year to the day later, on June 14, 1866, the parlor was the scene of Josephine's wedding to James William Boyle.
The 21-year-old groom was an oyster dealer, but would go on to greater things.  He would eventually become one of the largest oyster dealers in the country and a force within Tammany Hall.
Two years after Josephine's wedding the Woods sold the house to Joseph A Monheimer, an alderman and contractor, and his wife Emma.  Monheimer enjoyed large civic contracts, such as the one signed on May 15, 1870 for "the paving of Seventh avenue, from Fourteenth to Fifty-ninth street, with the Stafford pavement."
It is possible that Joseph Monheimer's position as alderman contributed to his city contracts.  And whether it did or not, the situation would certainly be called out as a conflict of interest today.  At the time of the paving job, Monheimer was earning $4,000 per year as alderman.  In September 1873 he received an astounding 50% raise to $6,000--about $135,000 in today's money.
Like all affluent families, the Monheimers spent at least part of the summer season away from the city.  In 1874 their trip nearly ended very badly.  On August 17 the New York Herald reported, "Alderman Joseph A. Monheimer is reported lying very low of fever on the coast of Maine, whither he had gone fishing in the early part of the summer season." 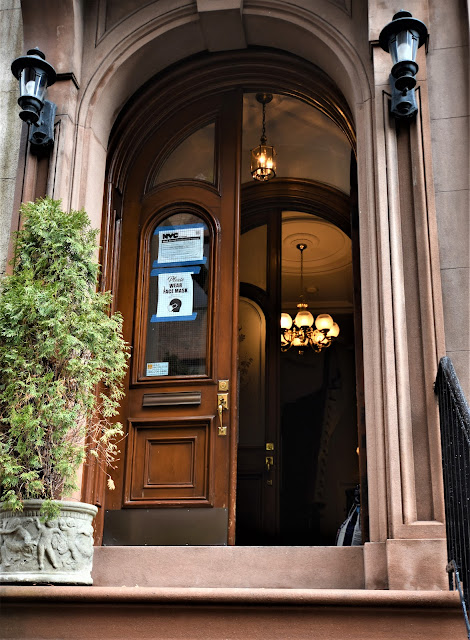 A glimpse into the stair hall reveals remarkably surviving elements--an etched glass door and electrified gas chandelier.
The Monheimers remained at 223 East 31st Street until March 1880, when they sold it to Emeline and John O'Byrne for $15,000 (about $392,000 today).   O'Byrne was an attorney with offices in the Stewart Building on Broadway, having entered practice in 1862.
O'Byrne took on a major client in January 1889, the Oyster Dealers' Association, represented by, coincidentally, James William Boyle, who had been married in the 31st Street house 23 years earlier.  O'Byrne was retained to obtain rights from the State for the usage of the water front on the Hudson River from West 10th to West 11th Street, at the time known as the Oyster Basin.
Boyle's involvement with Tammany Hall may have been a major factor in the transaction being closely scrutinized by the city's Commissioners of Accounts.  In July O'Byrne received $13,000 payment for his services--more than $375,000 today.  The Commissioners of Accounts wanted to question him about the massive fee (especially since the oystermen had already been using the water front in question before he was hired).
On November 20, The World reported that John Redmond attempted to serve a subpoena at 233 East 31st Street, but "was met by Mrs. O'Byrne, who said that her husband was ill in bed and could not attend the dock investigation today.  She promised to send to the Corporation Counsel a doctor's certificate."
Indeed, Dr. T. F. Joyce sent a note which said in part that O'Byrne was "suffering great pain from a severe attack of sciatica; that said John O'Byrne is now confined to his bed and room and is utterly unable, and will be for a few days, to leave his house."  The World said, "The genial Colonel was out with Mrs. O'Bryne yesterday evening and did not return till late, so an employe[e] of the Corporation Counsel's office says.  He was stricken, however, about that time."  Finally, on November 29, a warrant for O'Byrne's arrest was issued.
O'Byrne weathered the legal storm and the couple remained at 233 East 31st Street until 1898 when it was purchased by Robert Loercher.  Loercher was president of A. Haug & Co., an importer of ornamental papers used in bookbinding.
The Loerchers, whose son, Walter, was attending the City University of New York in 1901, took in a boarder.   Annie C. Ackerly was no retiring widow.  In 1895 she had been hired by the New York Custom House as an inspector, attached to the Special Agent's Office.  She still held the position on the evening of January 11, 1907 when she died "suddenly" in the East 31st Street house.  Her funeral was held in the parlor the following Monday morning.
The Loerchers' boarders continued to be city employees.  Their next boarder was James J. Lynch, a "keeper" with the Department of Corrections.  In 1909 Michael J. Deviney lived with the family.  The bachelor had been a clerk in the County Clerk's office since the 1880's.
When World War I broke out, the Loerchers had three boarders.  One, Frank P. Young, was declared exempt from military service because of his position as cashier in the New York County Sheriff's Office.  Eugene M. Masterson, who lived here with his wife, the former Winnifred M. Young, was not so lucky.  He was killed in action on September 29, 1918.  His body was returned to New York and his funeral was held in the nearby St. Stephen's Church on November 21. 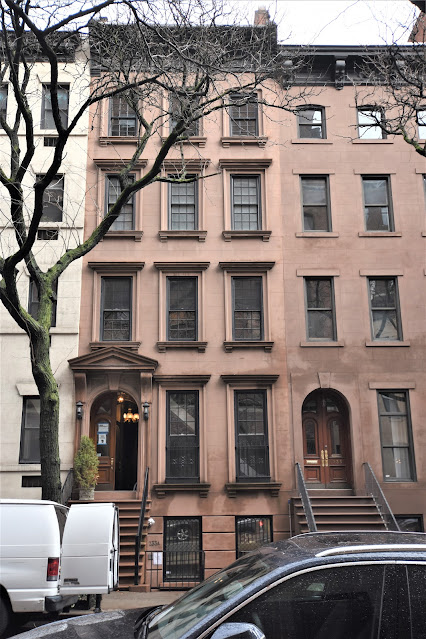 The house remained a single family residence until 1970 when a renovation resulted in two duplexes.  The configuration was altered eight years later when each floor from the basement through third now held one apartment, and a duplex in the fourth and new penthouse level (unseen from the street) were created.
photographs by the author
many thanks to reader Ted Leather for prompting this post
no permission to reuse the content of this blog has been granted to LaptrinhX.com
Posted by Tom Miller at 1:14 AM