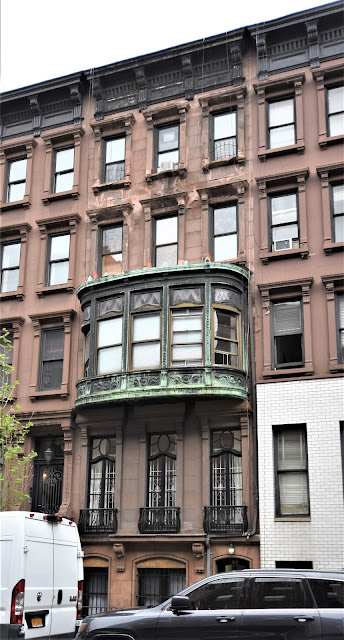 In January 1885, architect John Sexton filed plans for seven four-story brownstone houses on the north side of West 71st Street, between Columbus Avenue and Central Park West.  The 19-foot-wide homes would cost the developer, Owen Donahue, $12,000 each to construct (about $329,000 today).  Donahue may have run into financial problems, because before the project was completed his builders, George and Andrew Crawford, held title to the properties.
Although the row was completed in 1886, the Crawfords retained possession of 49 West 71st Street until October 23, 1890 when it was sold to Louis Stix for $34,500--just over $1 million today.  The Real Estate Record & Guide noted, "This is the last house of the row built by Mr. Crawford on 71st street."
The house was identical to the other six along the row.  Designed in the neo-Grec style, its openings sat within architrave frames, each having a molded cornice and bracketed sills.  Identical pressed metal cornices graced each house along the row. 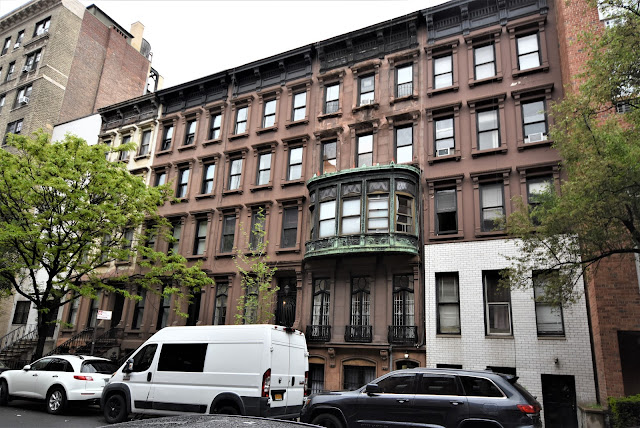 49 West 71st Street is easily identified along the row of once-identical homes by its 1909 French makeover.
Louis Stix purchased the property as an investment.  (He and his family resided in another of George Crawford's houses on the block, 35 West 71st Street, just steps away.)  He leased it  to Isabella Meritt Hawley.
Isabella was born in St. John's, New Brunswick, where she received a private education before attending the Troy Female Seminary in Troy, New York, and then Mrs. Mears' Boarding and Day School in New York City.  She was the widow of Peter Radcliffe Hawley, an officer of the U. S. Coast Survey, a Government-run scientific organization.  They were married in 1856 and had five children.
Isabella Merritt Hawley was no  hapless widow.   An accomplished dancer and musician, the 1898 Emma Willard and Her Pupils noted that she was, as well, a "contributor to the daily newspapers on current topics, and has translated from both French and German."  That same year, on December 9, The Argus reported that she had incorporated the stock brokerage firm, I. M. Hawley Company with her sons Alan and William.  The New-York Tribune commented that she spoke "fluently French, Italian and German and was especially interested in Oriental philanthropy and religion."
One of Isabella's two daughters was Wilhemina Douglas Hawley, born in 1860.  Like her mother, she showed early artistic talent and in 1879 enrolled in the Cooper Union Women's Art School, and the following year she entered the Art Students League--eventually becoming its first female vice president.
When her mother moved into 40 West 71st Street, Wilhemina was in Paris, studying at the Academie Julian.  She would never return, settling permanently in Europe where she pursued her career as an artist.
Equally noteworthy was Isabella's son, Alan Hawley.  His interest in stocks and bonds paled to his passion for flight.  Born in 1869, he attended the prestigious Trinity School in New York City.  He would become a balloonist and early aviator.  In 1910 he entered and won the Gordon Bennett International Balloon Race, and in 1916 was first passenger to fly in an airplane from New York City to Washington D.C.
In the meantime, Isabella carried on the expected routine of a wealthy socialite.  On June 28, 1898, The Evening Telegram announced she "has leased a cottage at Seabright, N.J. for the season."
The house was sold to George Potts in 1901, triggering a rapid succession of owners and occupants.  Potts resold it the following year to Irving I. Kempner.  In 1903 it was purchased by Lewis C. Marshall, who sold it to Elizabeth E. Mack in April 1909.
As Louis Stix had done, Elizabeth purchased the property as an investment.  A professional lecturer and speech instructor, she had studied under Sarah Bernhardt.  The unmarried speaker gave lectures and dramatic readings on subjects like "Current Events of the New York Theatres" and "Modern Poets."
Before leasing the house, Mack hired the architectural firm of Herts & Tallant to modernize it.  A three-story addition was constructed in the rear, the stoop was removed and the entrance lowered to the basement level, and a striking copper oriel was added to the second floor.  The former parlor level was given French windows fronted by bulbous faux balconies. 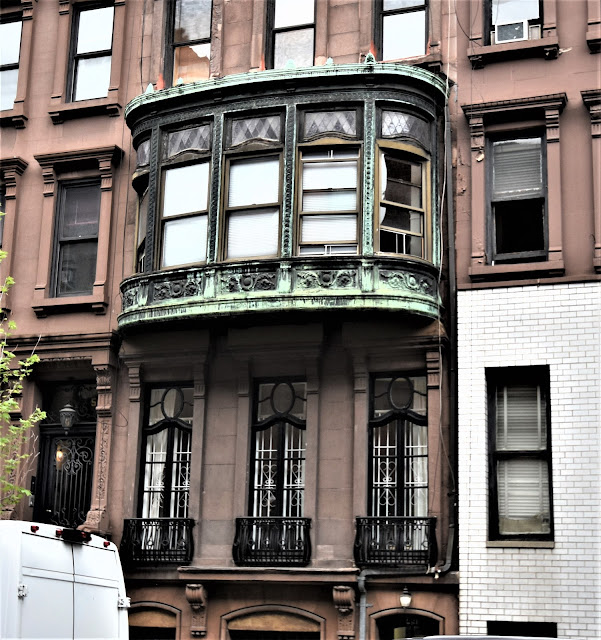 The glass of the original oriel window panes would have been curved to follow the shape of the bay.
Mack's first long-term tenant came in 1917 when Nelson W. Greenhut and his wife, the former Cecile Erstein, moved in.  Greenhut was a partner in the private banking firm of Greenhut & Co., founded by his father, Joseph B. Greenhut.  (Joseph Greenhut had distinguished himself in the battle of Gettysburg, earning a special commendation from Secretary of War, Henry L. Stimson.)
Jacob H. Scheuer purchased the house in 1924.  After the Scheuer family sold it two years later, it was operated as an unofficial apartment house, home to professionals like attorney Joseph Ankus throughout the Depression years.
In 1947 a renovation resulted in two apartments per floor.  During the Cold War years of the 1960's it was owned by Lino Quirko, who installed a Federally registered fall-out shelter in the cellar level.
A resident in the summer of 1969, Karen Sue McKee, led police in several counties on a nearly year-long search for her.  The News-Review reported on March 5, 1970, "Police say she went on a shopping spree last July in Suffolk [county] stores, concentrating on Riverhead, Patchogue, and other Brookhaven communities, writing forged checks ranging from $180 to $220, and purchasing small articles."  The total value of her buying binge was more than $2,000--nearly seven times that much in today's dollars.
The 29-year-0ld was arrested in November 1969 in Rhode Island, "but jumped $2,000 bail on Nov. 13," said The News-Review.  It all ended without drama when McKee surrendered to County Police at Hauppage, New York on March 3, 1970. 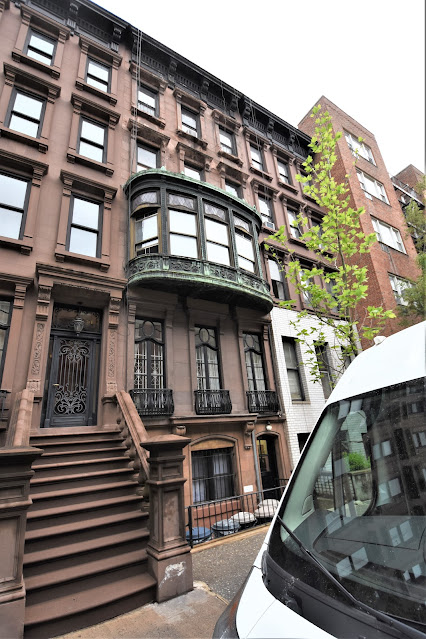 The appearance of the original stoop can be seen next door at 51 West 71st Street.
Outwardly, 49 West 71st Street is little changed since Elizabeth E. Mack gave it an architectural split personality in 1909.
photographs by the author
no permission to reuse the content of this blog has been granted to LaptrinhX.com
Posted by Tom Miller at 1:11 AM