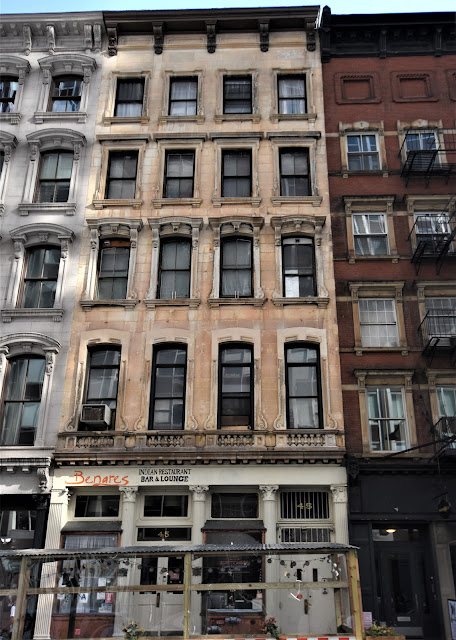 Until 1841, Rev. Dr. Barry's Academy operated from the five-story house at 45 Murray Street.  The property was acquired by clothing manufacturer Francis W. Hutchins in 1850.  It appears he lived in the house until 1854, when an auction was held of "the entire furniture."  The listing hinted at the sumptuous interiors, including "elegant chandeliers," rosewood parlor furniture, a rosewood piano, and "center tables, with marble tops."  The announcement noted, "the building is to be removed."
Hutchins erected a 26-foot-wide, five-story store-and-loft building on the site.  Architectural historians agree that the architect was most likely Samuel A. Warner, whose works include the Marble Collegiate Reformed Church on Fifth Avenue.  Faced in marble above the cast iron storefront, the Italianate structure featured blind balustrades below the tall second story windows.  They supported graceful volutes that flowed down from the scrolled brackets of the gently-arched window cornices.  The third floor openings were treated similarly, while those at the fourth and fifth floors were less showy.  The brackets of the pressed metal terminal cornice flanked panels within the marble frieze. 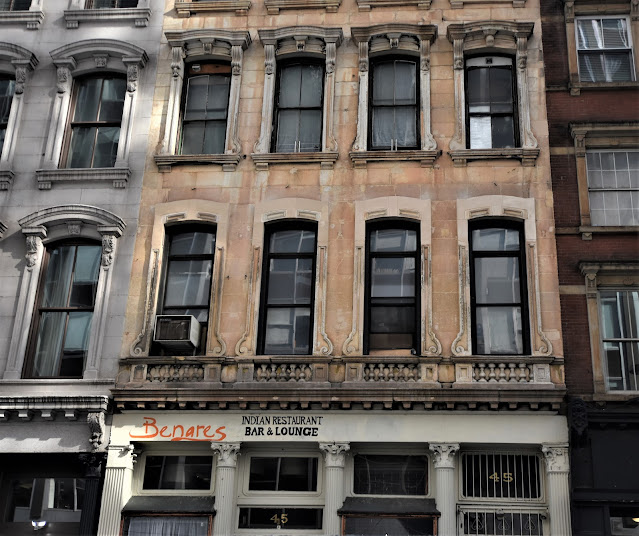 The second story windows have, sadly, lost their cornices, but overall the striking details survive.
On January 10, 1855 Hutchins offered "The lower part of the new first class marble front store" in the Morning Courier and New-York Enquirer.  The ad promised that the building "will be finished 1st Feb."
Answering the ad was Townsend, Boynton & Jones, makers of women's pantaloons.  They shared the building with their landlord, Francis W. Hutchins, who moved his wholesale clothing operation into the upper floors.
By 1860, the store space was occupied by the auctioneering firm Lockwood Bros. & Underhill.  It liquidated excess stock, or the stock of companies that had gone out of business.  The sale of the goods were often ordered by the City Marshall.  But in September 1860, it was a German peddler, James Dryfous, who suspiciously brought "eighteen dozen men's shirts and five dozen ladies' and gentlemen's under-garments," according to The New York Times.  It did not take authorities long to track the items, "recently stolen from the store of Mr. James S. Davie, No. 78 Cedar Street."  Dryfous was arrested and held for trial.
Francis W. Hutchins was gone from his building in 1861.  Lockwood Bros. & Underhill were still in the store, the second floor was occupied by the wholesale button and "general finding" store of T. S. Wheeler, the third by shirt manufacturer Hecht Friedland, and on the fourth and fifth floors were wholesale clothier A. Weinstein & Co. and Churchhill, Ingalls & Co., "merchants."  At around 11:20 on the night of September 9 that year, fire was seen in the fourth floor.
Although fire fighters were quickly on the scene, according to The New York Times, "owing to the peculiar, inflammable nature of some of the materials, the fourth and fifth floors were completely enveloped in flames."  Within half an hour the entire building was engulfed, the flames lighting up the night sky.  At about midnight, the rear wall collapsed.  The New York Times reported, "the heat was so intense on the opposite side of Murray-street at one time, that several of the hose[s] had to put constant streams of water, until the walls and roof of No. 45 fell in." 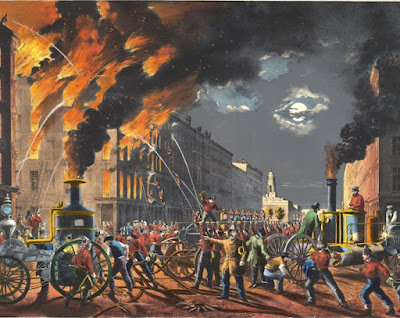 The intense fire was the subject of a Currier & Ives print, The Life of a Fireman.
In the end, only the marble façade was left standing.  The newspaper said it was too soon to know the exact loss, "but it was estimated by good judges that it could not be less than $150,000."  (That amount would equal about $4.5 million today.)
Within two days the fire marshal announced he "strongly suspected" arson.  The fire had started in A. Weinstein & Co. and, according to Katharine Greider in her 2011 The Archaeology of Home, "All these facts seemed to imply that someone, maybe even someone connected to Abraham Weinstein, set the fire to make good on fall merchandise that otherwise would have to be chalked up to a loss."  The investigation waned and no charges were ever pursued.
Although the newspapers called 45 Murray Street a total loss, Francis Hutchins rebuilt the gutted interior.  Following what was approximately a two-year renovation, the building filled with a new batch of drygoods merchants--Meriman & Long, Lewis Mills, Alexander Munkitrick, and yarn dealer C. R. Cutler & Co.
The neighborhood saw new types of businesses in the last years of the 1860's.  In 1868 wine merchants Wilson, Morrow & Chamberlin were in the building (the name was changed to Morrow, Chamberlin & Co. the following year).  Another non-drygoods related firm, the American Papier Mache Company was here by 1870, and flooring manufacturer Drew & Bucki opened a branch office in the building around 1874.

Real Estate Record & Guide, September 26, 1874 (copyright expired)
The trend continued, with Northampton Cutlery Co. and Wittemann Brothers, makers of tin foil, calling 45 Murray Street home in the early 1880's.  They would have to find a new location, however, in 1884 when cork dealer John Robinson & Co. leased the entire building.
In 1885 New York's Leading Industries described the business as a "manufacturer of corks and bungs, and importers of corks, dealers in brewers' and bottlers' supplies."  Founded in 1874, the firm employed an average of 150 workers at its Brooklyn factory at any time.  Most of the activity in the Murray Street building was "cork sorting." The firm's offices and salesroom were in the ground floor store level.
As the name implied, John Robinson was the principal in the firm.  He was affiliated with another cork firm, Armstrong Brothers & Co. of Pittsburgh.  Although, according to The Sun, "Mr. Robinson was generally supposed to be wealthy," he declared bankruptcy on May 5, 1891.  The firm now continued as Armstrong Brothers.
The company remained at 45 Murray Street until about 1901 when the building once again saw multiple tenants.  Among them were the Carter Medicine Company; the Comstock Hoff Mfg. Co., leather goods dealers; and Lamson & Goodnow Manufacturing Co., makers of cutlery and knives. 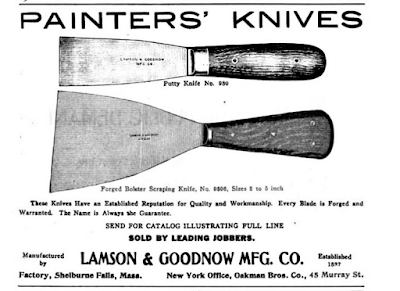 Hardware Dealers' Magazine, February 1910 (copyright expired)
In 1907 Brent Good, president of the Carter Medicine Company, purchased the building.  He continued to operated his business here, while leasing space to other tenants.  He had started out in the "proprietary medicine" business in 1866, and in 1880 had co-founded Carter Medicine Company with Samuel J. Carter.  The firm's one product was a pill, promised to cure "headache, constipation, dyspepsia, and biliousness." 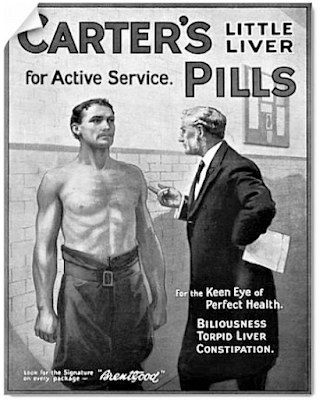 Carter's Medicine Company targeted the military in this 1914 advertisement.  copyright expired)
Good traveled to England in 1915--a dangerous time to be abroad.  The previous year, in December, Germany had begun aerial bombing of Great Britain.   Now in October 1915, Brent Good found himself in the midst of the upheaval.  On November 11, The Sun reported, "While in London on business a few weeks ago he was shaken up during a Zeppelin bomb raid and collapsed soon after returning home."  The 68-year-old never recovered from the shock and died on November 10.  The article noted, "He had made a fortune in the manufacture of pills."  By the time of that comment, the catchy name "Carter's Little Liver Pills" became a household phrase.
Carter Medicine Company continued at 45 Murray Street.  The changing tenor of the neighborhood was reflected in the tenants at the time.  Despite rampant anti-German sentiments, in 1917 Otto Goetz imported "German china, fancy goods, Bohemian glassware, beer steins, bisque novelties."  In the post war years Wallach & Behrend Co., dealers in chinaware and cafeteria equipment, was here, as was the Chemical Co. of America, makers of dyestuffs.
Carter's Medicine Company left Murray Street in 1935.  (In 1951 the Federal Trade Commission ordered it to change the name to "Carter's Little Pills," saying the "liver" in the name was deceptive).
Throughout the rest of the century more industrial tenants occupied the building.  For two decades, starting in 1935, the International Plumbing Supply Co., and the Enbee Mfg. Co. were here.  The 1940's saw Harrington J. Bradford & Co., and Universal Budget Systems, dealers in "inexpensive family budget books," in the building.
Today an Indian restaurant occupies the former store space, while the upper floors continue to house small businesses and factories.  Despite the unfortunate loss of the architectural detailing of the second floor windows and a devastating 1861 fire, Samuel A. Warner's striking 1855 design is incredibly intact.
photographs by the author
LaptrinhX.com has no authorization to reuse the content of this blog
Posted by Tom Miller at 1:19 AM