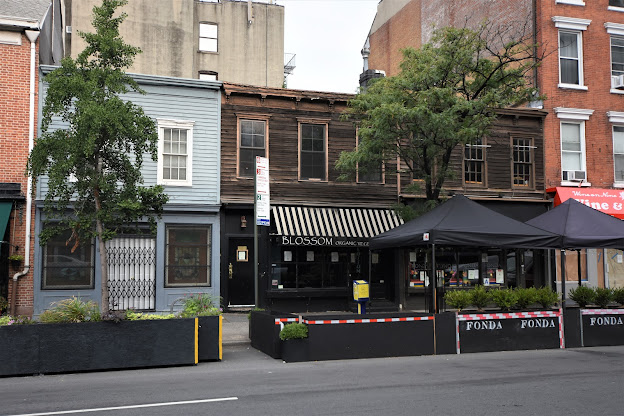 As Clement Clark Moore divided his family estate, Chelsea, into building plots in the early 1830's, real estate operator James N. Wells took over management of the sale and leasing of the property.  In 1833 Wells completed his grand home at No. 414 West 22nd Street.

At some point in the early 1840's he built three two-story wooden buildings abutting his office at No. 183 Ninth Avenue.  With stores on the ground floor and living space above, the simple wooden structures were in stark contrast to the handsome brick homes rising along the nearby blocks.  Reportedly Wells received harsh criticism for tainting the refined personality of the neighborhood with the modest frame structures.

By the early 1850's Elijah D. Hunt operated his bakery in No. 185 Ninth Avenue while his family lived in the second floor.  No. 187 was home to the family of Townsend Carpenter who, ironically, was a carpenter.  Francis Davison and his wife, Sarah, lived in No. 189 while Spivey Reuben (who lived on Madison Avenue) ran his cloth store downstairs.  Davison was a clerk and his wife made shirts, apparently from their living space.

By 1856 James Hanna had taken over the former Elijah Hunt bakery and carpenter John Simington lived on the second floor.  And by now Francis S. Wurth's shoe store had taken the space of Reuben's cloth shop at No. 189.

Small shops would come and go in all three locations until the 1870's, as did the blue collar tenants in the upper levels.

By 1874 Albert H. Siemens purchased and moved into No. 185.  It was conveniently close to his grocery store which was in the former Wells office next door in No. 183.  His own store in No. 185 was apparently vacant that year and he rented it to the city as a polling place, earning him $7.50, or about $175 today.  He then found a tenant in John J. Meagher, who lived nearby at No. 348 West 18th Street.  He opened his boot and shoe store here and would remain for years. 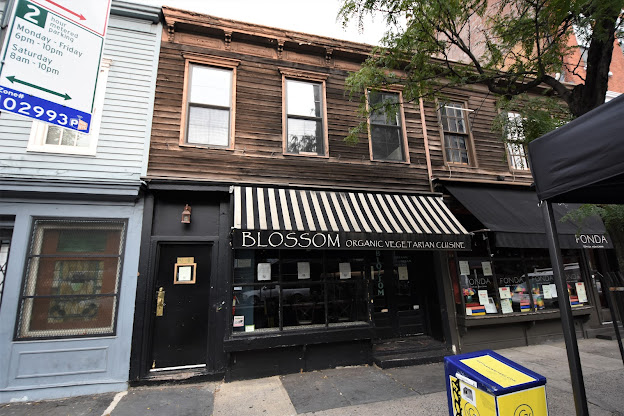 In the meantime Thomas Ennis had moved his family into the second floor of No. 187 by 1872 and opened his plumbing business, Ennis & Cook, in the store.  His partner, Francis E. Cook, lived on Tenth Avenue.

On November 24, 1886 broker James Sherlock set out to improve his fashionable home at No. 333 West 23rd Street by having running water installed.  Three Irish laborers, Patrick Loughran, Patrick Rooney and William McDonald dug a 12-foot deep ditch under the sidewalk to enable the plumber to connect the Sherlock pipes to the water main.  When rain began, the plumber warned the men that it was not safe to keep excavating, but they assured him they had shored up the sides.

They were still digging at 8:30 that night when the sides gave way.  While his co-workers were able to climb out, Loughran was buried to his armpits, his head six or seven feet below the street surface.  Policemen first began trying to extricate him, their ranks added to by pedestrians.  The Sun said that "10,000 helpless but sympathetic people [were] standing around outside the police lines."  Neighbors, including actress Lily Langtry, who lived at No. 361 West 23rd Street, opened their homes and brought warm drinks for the rescuers.  The victim was not ignored, either.  "Mrs. Langtry got some brandy and soda on a tray and sent her English butler to take it to Patrick."

The rain continued to pour.  As the night wore on and the workers wore out, "Thomas Ennis, a plumber, of 187 Ninth avenue, furnished a fresh relay of men when Mr. Dean's were exhausted, and the work was begun systematically."

The work continued until nearly 7:00 the next morning when Loughran was finally pulled out.  "There was an uproar of cheering...All along the block windows were thrown up and handkerchiefs waved at the old man [he was 55] as he was borne toward the ambulance."  Presumably Thomas Ennis's crew got the day off.

On July 5, 1879 The Sun reported "Piercing shrieks by a woman, startled the neighborhood of Twenty-first street and Tenth avenue about 2 o'clock yesterday morning."  An officer ran to the scene to find John F. Seymour, the brother-in-law of Bishop George F. Seymour, lying on the grounds of the General Theological Seminary bleeding from a pistol shot to the chest.  The cries had come from his wife, who told the officer "They've murdered my husband!  They've killed him!"  Seymour died on the spot where he fell.

Just up the avenue, No. 179 had been home to Henry J. Chapman's tailor shop since around 1872.  A respected figure in the neighborhood, Chapman was recruited to sit on the Coroner's jury on July 11, 1879.   The men heard testimony of several witnesses.  Mrs. Seymour told how robbers took her husband's watch and rings before shooting him.  A seminary student testified that he was awakened by gunfire and a woman's screams.  "I jumped up and opened the shutters and heart two of three voices.  The first words I heart were 'Shut your mouth' in the voice of a man.'"  The stream of witnesses all gave similar accounts.

Chapman and his co-jurors arrived at the verdict that "J. F. Seymour came to his death from a pistol shot wound in the left breast accidentally received at the hands of some person or persons unknown."  The case was dropped.

Henry J. Chapman's tailor store was taken over by James Devine around 1896.  Like Chapman, he would remain in the space for years.

William H. Reed, Jr., who lived at No. 406 West 19th Street, opened his butcher shop in No. 185 by 1890.  He was still here in 1905 when he was appointed a Commissioner of Deeds.  The position, similar to a notary public today, added to his income.  Next door, Ennis & Cook's plumbing store had been taken over by plumber and gas fitter Thomas F. Farley by 1893.  He too would remain through the turn of the century.

By then No. 189 was home to Joseph Kelly.  He and his family lived upstairs and he ran his contracting business from the storefront.  His was a significant operation.  On November 12, 1904 the Real Estate Record & Guide reported that he had been given the contract "for the Lewis Nixon house on Staten Island.  The work, which will amount to over $25,000 in cost, will be a complete renovation of the old Ward mansion on Ward's Hill."  Kelly was responsible for new plumbing, a steam-heating plant, new windows, mantels, and such.   He remained in No. 189 until the early years after World War I. 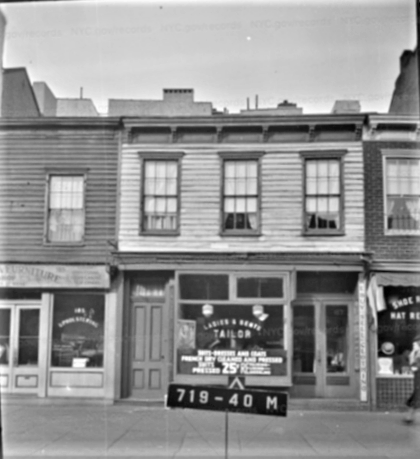 That the little wooden houses survived development through the 20th century can only be regarded as miraculous.  The store in No. 185 was the upholstery shop of Strauss & Price, run by Benjamin Strauss and Julius Price, by 1915.   Three decades later it was still an upholstery store, now run by H. Milkowitz.  And as had been the case in the mid-19th century, Nos. 187 and 189 held a tailor shop and a shoe store.

In the mid-1970's a pizza shop run by Nustie Mustafa was in No. 189.  The Ninth Avenue neighborhood was gritty and sometimes dangerous.  Mustafa apparently took no chances.  A "dispute," as described by The New York Times, with 18-year old Robert Boyd on January 6, 1976 got out of hand.  Mustafa was arrested for assault after shooting the customer in the arm.

For years in the 1990's the former pizza shop was Paws Inn, a cageless kennel where "dogs romp freely with other dogs, sleep on furniture, watch television, even take phone calls," according to The New York Times journalist Karen Schoemer on July 25, 1999.  It was followed by Indian restaurant Bombay Talkie, which opened in January 2005, and then by Mexican restaurant Fonda in the spring of 2014. 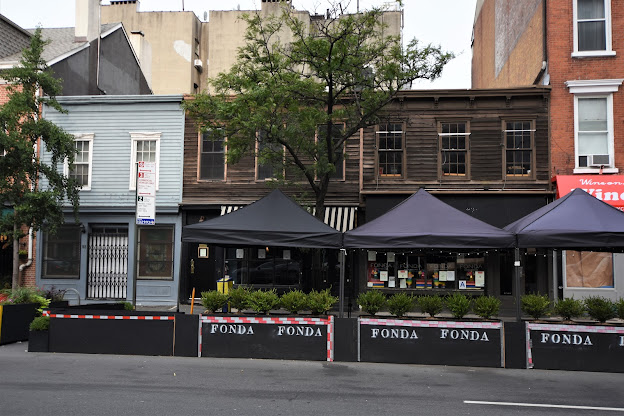 After around 180 years the little buildings are amazingly intact.