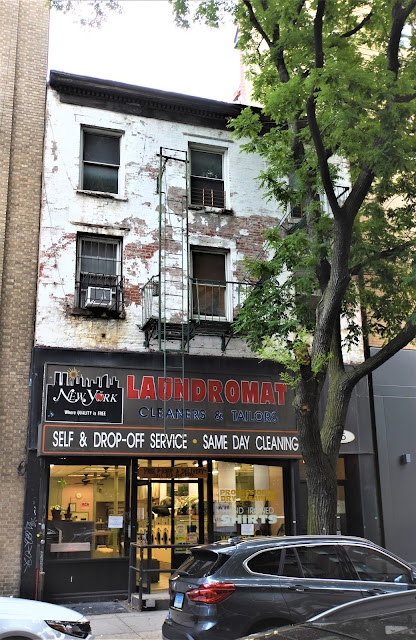 Although Sixth Avenue was opened in the 1820's, the area around it remained rural with only scattered development until the early 1850's.  Around that time a three-story brick-faced house was erected at No. 105 West 16th Street.  Trimmed in brownstone it would have had a short stone stoop above the basement level.  A simple dentiled cornice ran along the roofline.

In 1854 the 25-foot wide house was home John S. Howell.  Born in Pennsylvania, he was the engineer of the steamer Potomska, which routinely traveled between New York and Massachusetts.

John was returning home on Sunday, October 22, 1854 when a horrific accident occurred.  As the Potomska was pulling into the dock at Pier No. 11 on the North River (later renamed the Hudson River), Howell somehow became entangled in the machinery below decks.  The New-York Daily Tribune reported that his skull was fractured "by being caught between the cylinder and reversing gear of the boat."  He died at just 29 years old.
Briefly following the horrific accident the house was shared by a "boatman," Sylvanus Hudgins, and John H. Westervelt.  Then in 1857 it became home to the Palmer family.
William Palmer was an accountant at No. 10 South Street that year.  He and his wife, Ann, had a son, Henry.  William seems to have received a promotion in 1859 when directories listed him as "clerk," a responsible position.
William Palmer disappears from the directories in 1860 while Ann's name suddenly appears.  Normally only widows or females who ran shops were listed, strongly suggesting that William had died.  Henry was, by now, earning a living as a carpenter.
In 1861 the family of William Dolan moved into No. 105 West 16th Street and would remain for years.   William and his wife, Catharine, had a daughter, Lizzie.  They were financially comfortable enough to summer in West Orange, New Jersey.

Irish Catholics, the Dolans worshiped at the Church of St. Francis Xavier, a block away and it was there, on August 6, 1867 that daughter Lizzie M. Dolan was married to John P. Fleming.  The newlyweds made their home in the 16th Street house.

Lizzie's happiness would be short-lived.  In the summer of 1870, the family was at West Orange.  On Sunday July 3, John P. Fleming died there.  His body was returned to the 16th Street house where the funeral was held the following Wednesday.  Afterward a solemn requiem mass was held at the church where he had been married just three years earlier.

In July 1874 William Dolan died in the house at the age of 75.  His funeral was held in the Church of St. Francis Xavier on July 22.

Catharine remained in No. 105 for another nine years.  By the early 1880's the neighborhood around the elderly widow's home had noticeably changed.  Sixth Avenue, just steps away and once lined with two- and three-story brick houses, was now a thoroughfare of retail shops with a clattering elevated train that ran up the center.

On April 30, 1883 Catharine sold the property to real estate operator James H. Dick for $19,000--or about half a million in today's dollars.  The significant price was most likely more to do with the commercial potential of the property than for its residential value.

Nevertheless, operated as a boarding house, No. 105 avoided major renovation for nearly two decades.  Its tenants were decidedly less refined that the Howells or the Dolans.

Among the initial residents were Ellen and Owen Finnegan.  After the couple got into a physical altercation in the house in January 1885, Ellen had her husband arrested.  According to the New York Herald, she told the judge in Jefferson Market Court on January 3, that she did not care how often he threw his shoes at her, "provided his feet were not in 'em."  The article said "When, like last night, he threw feet and shoes together, it was too much."

Owen could not explain his actions to the judge, saying "I must have done it in my sleep."  The judge replied "Very well!  You may sleep where there are only stone walls to kick for thirty days."

Nineteen-year old Charles Felego lived here in 1891 when was offered a job by Emlie Vallo and Peter Boise who were planning a new place of entertainment on Broadway.  Exactly what Charles's duties were are unclear, but the Artistic Smoke Musee for Gentlemen where he started working on November 14, opening day, could only have been declared "disreputable" by upstanding citizens.

The "museum" had only been opened a few hours when Police Captain Thomas Reilly and Sergeant Sheldon were passing by.  The New York Herald said "the suggestive sign caught their eyes."  They paid the entrance fee and entered.

"On the walls were hung paintings and photographs, and in glass cases were a number of wax figures of the anatomical museum style," said the article.  Captain Reilly blocked the doorway and sent Reilly to the station house for more police.

"When they arrived the place was raided, and all the paintings, figures &c., were bundled into trucks and carried to the West Thirtieth street station."  The proprietors were arrested and young Charles was put in custody of the Society for the Prevention of Cruelty to Children."

By the turn of the century a store had been installed in the ground floor of No. 105 West 16th Street.  The building was owned by George and Thomas Kelly of the Thomas Kelly & Co. department store at No. 263 Sixth Avenue, around the corner at 17th Street.  He hired architect William F. Wallace to do renovations costing about $11,000 in today's money in October 1900.

The alterations were for Kelly's new ground floor tenant, Beadleston & Woerz, owners of the Empire Brewery, whose lease began on October 29.  It was common for breweries to operate saloons at the time, giving them a monopoly on the beer and ale sold.  The Beadleston & Woerz saloon would remain in the space until 1912.

The upper floors were now run as a "hotel" by H. D. Roselle.  The term was polite and the activities in the rooms were at best questionable.

In April of 1912 Thomas Kelly leased the entire building to George Casey.  In the space where Beadleston & Woerz's saloon had been for years, he opened George Casey's Cafe--an innocent-sounding establishment.

On June 1, 1912 the Irish community newspaper The Advocate reported "On next Saturday evening the cafe at 105 West Sixteenth street will be officially opened by Mr. George Casey.  The spacious place is being beautifully decorated for the occasion, and his many friends will spend a splendid evening, as Mr. Casey has many good things in store for them."  The article called Casey "a typical Irishman, with a good big heart."

It did not take authorities long to discern that the café was simply a saloon and that the upper floors were a brothel.  On April 3, 1914 Special Excise (i.e., liquor) Agents Joseph G. Mandl and Elias Stiller entered the saloon, purchased a round of drinks, and went to the rear room where there were "about twelve tables and chairs and an automatic piano," according to Stiller's testimony.

About ten minutes later a "blond woman came in unescorted" through the hall door that led to the upstairs rooms.  Introducing herself as Anna, she sat down.  They were soon joined by two another unescorted women, Bernice and Sadie.  Stiller testified in court that the women made "revolting remarks" and "danced, making suggestive motions, raised their skirts and exposed their persons and used vile, profane and indecent language."  When that did not seem to be working, they exposed their breasts (Bernice unbuttoned her blouse and "placed her breast on the table") and "solicited the witnesses for immoral purposes."

On a legal technicality it was not George Casey, but his bartender, Charles Cardow, who was convicted of running a disorderly house, since the excise license was in his name.  The unfortunate bartender had not yet appeared in court for this charge when he was arrested on April 20, 1914 for selling liquor to an intoxicated customer.

Change to the building came soon afterward.  In 1917 Antonia P. Garcia leased what was now termed a store, and the upper floors were converted for small manufacturing.  In October that year the Abronowitz Embroidery Company leased the second floor and Edward Amsterdam took the top floor.

In 1922 Abraham Stern purchased the building.  At the time Weiner & Honick, furriers were operating from the second floor.  That year they advertised "Fur Chokers in "mink, fitch, [or] imitation stone marten" on sale for $2 to $6.  The most expensive would be about $90 today.

The ground floor retail space was vacant when Stern purchased the property.  He offered it for $1,500 rent per month.

In the 1940's the ground floor space was shared by Sam's Hand Laundry on one side and a tailor and furrier shop on the other.

Although the upper floors were never officially converted to apartments, actress Kathleen Murray and her theatrical manager husband Joseph Beruh lived in the building by 1964.  The couple had a son, David Marshall.

That year Beruh was managing the play The Subject Was Roses, which had debuted at the Royale Theatre on May 25.   Starring Martin Sheen, Irene Dailey and Jack Albertson, it would earn two Tony Awards and a Pulitzer Prize for its playwright, Frank D. Gilroy.

But on November 9 the couple was more concerned with another issue--Kathleen was about to give birth.  They stood on Sixth Avenue trying to hail a cab to the hospital.  As taxis sped by, producer Norman Twain noticed them and pulled his car over to say hello.  The New York Times reported "within seconds [they] were en route to the hospital."  The couple made it to the hospital in time for the arrival of a baby boy. 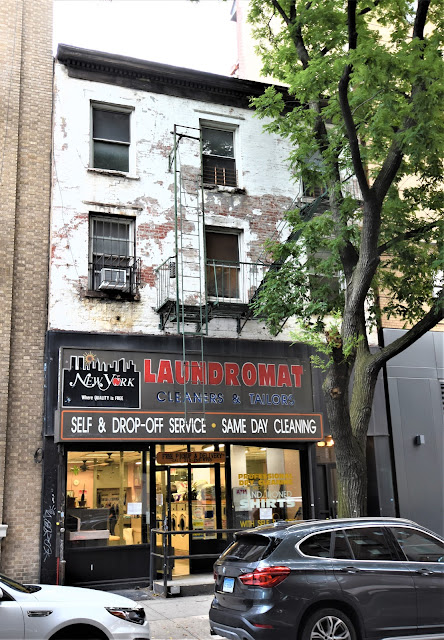 Today the peeling paint and altered storefront of the venerable and beleaguered house reveals little of its colorful history of more than 170 years.