In 1887 developer and architect H. M. Tostevin produced two five-story flathouses at Nos. 38 and 40 Morton Street, between Bedford and Hudson Streets.   The brick and brownstone buildings, with their showy decorative elements drawn from a grab bag of historic styles, apparently caught the eyes of Mary E. McLaughlin and her husband, George C. McLaughlin.

The McLaughlins were active in real estate circles--Mary as a developer and agent and George as a contractor.  Two years after Tostevin's buildings were completed, on March 23, 1889, the Real Estate Record & Builders' Guide reported that "G. Louglin" [sic] had hired architect Mortimer C. Merritt to design a three-story $30,000 apartment building next door to them at No. 42 Morton Street.

The plans changed within a month.  On April 9 The Evening Post reported on Merritt's plans, which now listed Mary E. McLaughlin as owner of record.  The height was now five floors and as a result the cost rose to $35,000 (just around $1 million today).  Completed before the year's end, No. 42 was a near match to Tostevin's earlier buildings.  It could be considered a very early example of homogeneous and sympathetic architecture, or simply brazen copying.

Whichever the case, Merritt produced a visually stimulating design.  The brownstone base was a marriage no fewer than three styles.  Renaissance Revival appeared in the carved panels below the arched openings and in the chunky caryatids with Corinthian capitals.  The undressed brownstone quoins and voussoirs drew from Romanesque Revival and the delicate incised carvings were neo-Grec. 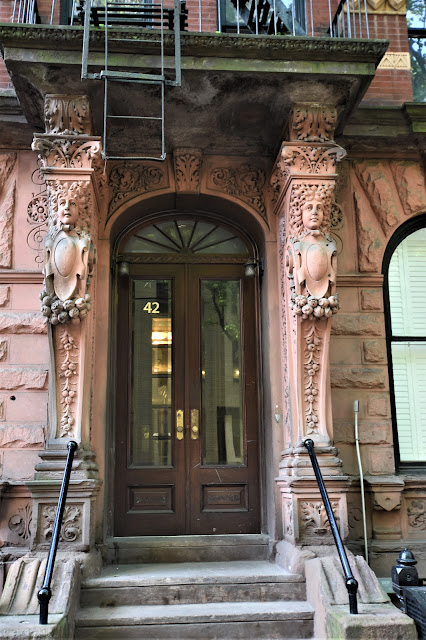 The four upper floors were faced in red brick and trimmed in stone and terra cotta.   The heft of the beefy neo-Grec lintels was softened by bands of cream colored terra cotta.  At the fifth floor the slightly recessed, two-bay central section terminated in a brownstone arch below the exuberant pressed metal cornice.

Each floor held three apartments of four rooms.  Although the building was four years old in February 1893, an advertisement in The Sun described No. 42 as the "Handsomest new, elegantly decorated house in Ninth Ward; portico stoop, private baths and closets; no children."  That the management refused to rent to families with children is somewhat surprising.  And the rent was not inexpensive--the cheapest being about $586 per month in today's money.

Interestingly, three years later rental ads still described the building as the "handsomest new elegantly decorated flathouse in the 9th Ward."  Now, however, other amenities were pointed out: hot and cold water and a range.  The rents had not gone up but the restriction on children was still in place.

The initial residents were middle class, like Christopher J. Lane, who lived here by 1894.  He had graduated from the College of St. Francis Xavier a few years earlier and listed his occupation as "lawyer."  He was embellishing just a bit.  In fact, he was a clerk in the law firm of Augustus C. Brown.

Wealthy New Yorkers left the city every summer for cooler resorts like Newport, Bar Harbor and Long Island.  Middle class citizens, like those who lived at No. 42 Morton Street, were not so fortunate and were forced to endure the insufferable and sometimes deadly heat.  A heat wave in early September 1898 was unrelenting.  In the period of just two days, September 3 and 4, 54 New Yorkers died.  Among them was 48-year old Harry Roll who perished in his apartment here. 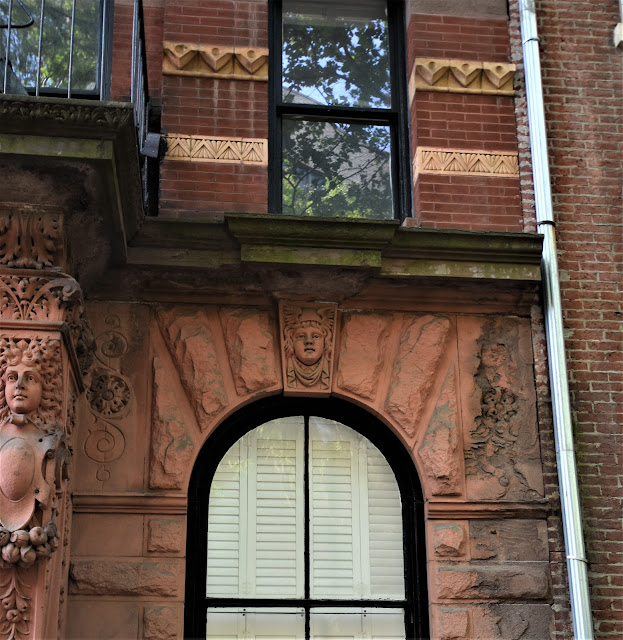 In the fall of 1897 attorney Oscar Chambers Prendergrast married his "pretty young wife," Anna Shannon, as described by The Brooklyn Citizen.  When Annie, as she was known, became pregnant a few months later Oscar abandoned her.  He begrudgingly agreed to return, but when she became pregnant a second time in 1899 he left again.  With no money, a baby to take care of and another on the way, the 25-year old moved back to her mother's home in Brooklyn.  She pleaded with Oscar to provide her a home, and finally received a letter with an address of an apartment.

On May 23, 1900, with her five-week old infant in her arms, she told a judge "when I found out where the place was it was a sub-basement at No. 42 Morton street.  It was not a place where I could take my children to, and, besides, he had a pal living with him there.  I did not want to go and take my children where there was another man."

Pendergrast had no interest in being a family man.  The Brooklyn Citizen said he "struck a Napoleonic attitude" and "declared excitedly that he had fought in Cuba, that he was the associate of Foster L. Backus, James G[ordon] Bennett and such men, and then dramatically exclaimed, looking down at the faltering young wife who stood tearfully beside him: 'Ye gods, that I should have been brought to such a pass as this!'"

Pendergrast, who represented himself, ranted to Magistrate Steers "I have been penned up over this woman for the last two months."  The article said he "was proceeding with a tirade against his wife when the Magistrate interrupted him, 'If you can't keep quiet I'll send you to jail.'"

As proof that he had provided Annie with accommodations a letter he had sent to her was shown to the judge.  It read:

As you have not troubled me up to this date I presume there is more crooked work going on.  You who will swear your soul away will no doubt have more fabrications looked up for the court.  I am ready, however, and will hold a copy of this letter to show the court.  The address was given you and is herewith written in plain letters.  If you leave this house never to return after your vile and most disgusting conduct, you can do so.

It gave the address of No. 42 Morton Street.

The plight of young women, especially mothers, in the 19th and early 20th century was evident in Annie's willingness to remain in the abusive relationship and to accept living in the sub-basement of the building.

The judge asked Prendergast, "Will you give your wife a home?"

Magistrate Steers advised Annie to go to the address and look it over.  "Will my husband come and take me there?" she asked.

Prendergast did not wait for the judge to respond.  "I will not.  I am not going to lose another day's work for you."

Steers told him, "You needn't lose another day's work.  Your wife will go over to the address you give her on Sunday.  You'll let her into the house, get rid of your friend if you can, and the case in the meantime is adjourned until June 14."

That friend did not leave and Annie was still living in Brooklyn when the case came up again.  This time Prendergast told the judge, according to The Brooklyn Citizen, "that his wife had been influenced against him by a 'gang,' but he did not specify who or what the 'gang' was."  And he defended the man who lived in the apartment, saying he "was an old-time friend who was down on his luck and was a physical wreck."

The couple somehow reconciled and would eventually have two more children.  Oscar legally changed his name to Jeffrey Deprend and was still married to Annie when he died on October 20, 1955.

By the first decade of the 20th century No. 42 Morton Street was home to, mostly, Irish-born residents.  Among them were Margaret Stenson and her brother John, who were natives of County Clare.   Margaret was married in St. Joseph's Church on Sixth Avenue on May 13, 1910 to Thomas Murray.  The Irish-American Advocate said that they "are sweethearts since they toddled to school together, some twenty odd years ago, which speaks well for their future happiness."  The newlyweds remained in the Morton Street apartment.  The following year John Stenson, still sharing the address, died in his apartment.

Over the next few decades the tenant list included Irish names like Hear, Keane, Boyle and Fitzmartin. 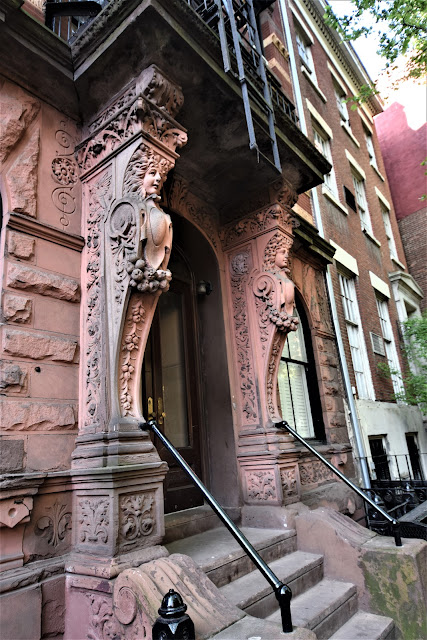 Jane Holden had an apartment here during World War II.  In February 1945 the federal government institute a nationwide curfew on nightlife.  A United Press syndicated column on February 20 said "The entertainment industry, joining their patrons in the biggest howl since prohibition, grudgingly prepared today to comply with War Mobilization Director James F. Byrnes' 'request' for a nationwide midnight curfew on night life."

Bar and nightclub owners complained loudly.  The Tucson Daily Citizen warned "The return of the speakeasy and the loss of thousands of jobs were cited today by many cabaret proprietors was the logical results" of the curfew.  And indeed, the speakeasy was back.

Jane Holden was 26-years old and not willing to end her night out at midnight.  So she found a Yorkville night spot that operated after hours.  Unfortunately for her, so did the police.  On March 5, 1945 the Daily News ran the headline "Court Stuns 15 Curfew Scoffers with: 'Fined $5'"  The article said "The eight men and seven women had come into court believing this was going to be just a repetition of the old prohibition-time brush-off" and that only the operators would "come to grief."  Instead Magistrate William A. Farrell charged them with disorderly conduct and a fine equal to $70 today. 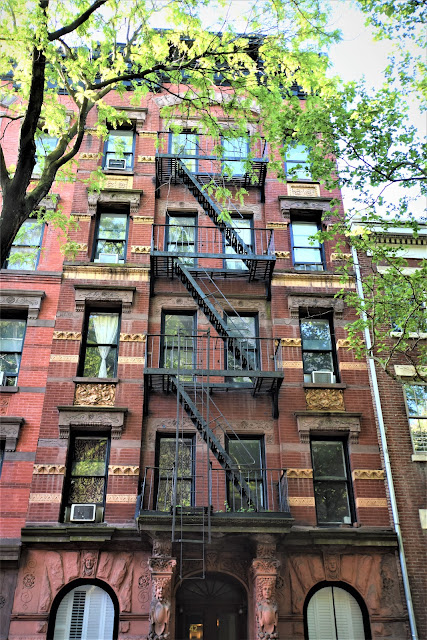 Little has changed, externally, to Mortimer Merritt's 1889 flathouse.  Inside much of the original detailing has been lost, but the configuration of about four apartments per floor remains.  It provides a fine example of late 19th century taste in middle-class apartment design.

photographs by the author
Posted by Tom Miller at 10:22 AM