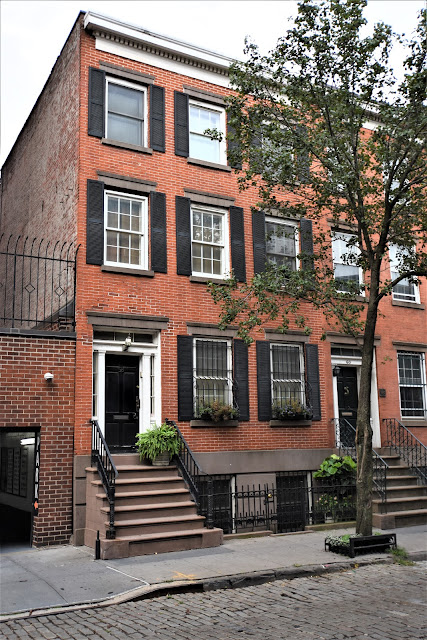 As late as 1831 Fair Ireland’s farmland slightly north of the village of Greenwich still sat greatly undeveloped.  But the Commissioners’ Plan of 1811 had laid out lot lines and numbers within the property bounded by 13th Street, Greenwich Avenue, West 11th Street and Greenwich Street.  And the rapidly expanding Village would soon overtake the old Ireland farm.

Horatio Street was named after Revolutionary War General Horatio Gates.  In 1844 John B. Ireland sold a stretch of property along the street to two cartmen--or delivery drivers--Cornelius Ackerman and Peter Van Natter.  A local builder, Abraham Demarest, erected five handsome Greek Revival residences on the plots, one of which, No. 58, became home to Cornelius Ackerman.

Like its identical neighbors, the 19-foot wide house was faced in red brick above a brownstone basement.  Its elegant doorway featured leaded sidelights and a transom which allowed sunlight into the foyer.  Simple brownstone sills and lintels trimmed the windows and a dentiled wooden cornice completed the design.

It is unclear how long the Ackerman family remained in the house, but by 1857 it was home to George W. Ford and his family.  George listed himself as a carpenter that year with his business on West 15th Street.  But he was obviously both talented and ambitious.  By 1861 he ran a second operation, at No. 3 Cedar Street, and was listed as a "builder."

As was common, the Fords took in a boarder.  In 1856 Henry B. Fox, a house painter, lived here; and by 1859 pianomaker John H. Frederick was leasing a room.  That arrangement worked out well and Frederick remained with the Ford family at least through 1869.

The family maintained a small domestic staff, most likely a cook and one servant.  An advertisement in the New York Herald on November 15, 1876 sought "A Protestant, to do general housework; good washer and ironer," and five years later another ad read "Wanted--A girl to do general housework; must be a good washer and ironer."  This time religion was apparently not so critical.

By now George W. Ford was highly successful.  He erected houses and apartment buildings, many of them in the northern part of the city.  He sold No. 58 Horatio Street to James F. Norris for $9,000--or about $250,000 today.  It was the beginning of a game of real estate hot potato within the Norris family.

Under Mary Norris's ownership No. 58 was operated as a boarding house.  Its tenants were for the most part respectable, working class single men.  On of them, J. F. Dunn, was looking for work in the fall of 1896.  His advertisement read "Young man, good knowledge of horses, long experience, [seeks] place as groom of country coachman, reference; wages moderate."

The boarding house continued following its purchase by John E. Nicholson in 1900.  There was at least one young woman boarding here that year.  Her position-wanted ad read "Respectable American girl as chambermaid and waitress in private family."

Robert T. Brice, a stevedore, had lived in a furnished room in the house for nearly five years in 1907.  The 64-year old lost his job in November that year and, to make matters worse, became ill.  On the morning of December 3 he was found dead in his room, "having been asphyxiated by gas," according to The Brooklyn Daily Eagle.  The newspaper added "The police report it as suicide, although it is possible that the case was accidental."

Another boarder to lose his job two years later was Joseph Fogarty, who lived in the house with his wife.  Fogarty had been a streetcar motorman and the sudden loss of income did not sit well with his wife.  The heated arguments became too much for the 38-year old.

Policeman Cavanaugh found him lying on a sidewalk in Central Park on the morning of August 13, 1909.  The Brooklyn Daily Eagle reported "There were two wounds in his throat and at his side was a razor."  He was treated at the Presbyterian Hospital where he admitted "he had tried to end his life because he had lost his position as a motorman and that he had had quarrels at his home."

During the next few years a surprising number of the boarders were chauffeurs--or at least were looking for work as one.  In the early days of automobiles, a driver needed to be as knowledgeable about working on cars as he was in driving them.  Each of the several advertisements the men placed from 1910 through 1913 stressed that they were expert drivers and machinists.

One boarder who stood apart from that group was Jack Mulchy, who arrived from Limerick, Ireland in July 1910.  Back home he was an entertainer; a championship step dancer and an Irish tenor.  (Mulchy's brother, incidentally, was known as the Irish Caruso.)

Now living at No. 58 Horatio Street, in February 1912 Mulcahy sought to find his fortune as a dancer.  He wrote a letter to the Irish community newspaper The Advocate offering "to meet any man in New York at his specialty in jig, reel and hornpipe."  His letter said in part "Am open to dance against the best in New York for any amount.  Only on the condition that the judges are Irish dancers themselves and that the number of Irish dances to be six as: Two old set dances with jig, reel, hornpipe and slip, time or slip jig."

Sadie Aylward lived here in 1929.  The first week of January that year she landed a new job as the rental agent for a newly-renovated apartment house on Gramercy Park East.  Only a week later she became part of a murder investigation after she opened the door of a vacant apartment to find the body of Leon Weissbrod, shot to death. 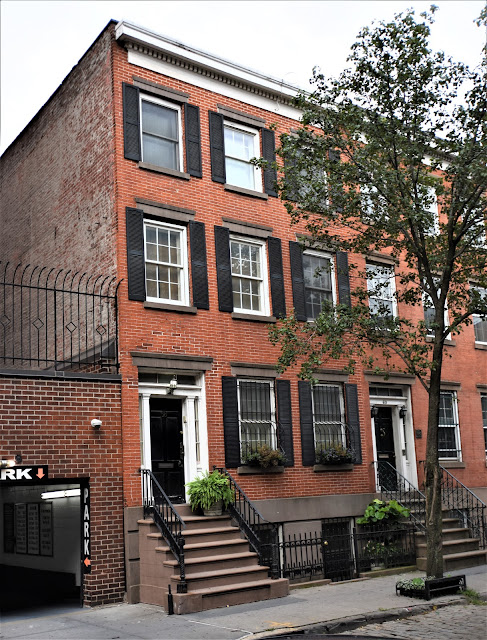 In 1969 No. 58 was returned to a single-family dwelling.  It was sold in 1990 for $860,000 (more in the neighborhood of $1.68 million today).  The listing had described it as a four-bedroom, 2-1/2 bath home with four fireplaces.  The new owners converted the basement level to an apartment in 1993.  Overall there is little change to the Ackerman house near 175 years after its construction.