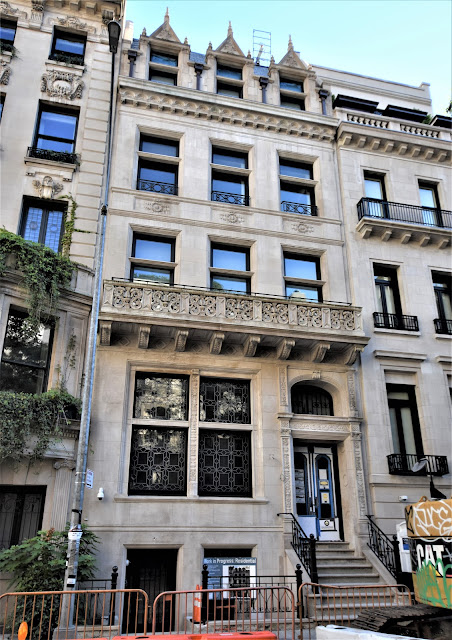 Stevenson was born in Kentucky in 1812.  He started out in business at the age of 16, initially involved in dry goods.  He founded the Nashville and Chattanooga Railway in 1848.   A portion of his service to the Confederate Army in the Civil War was the management of the railroads.  Following the war, he moved to New York and focused on real estate.  The Brooklyn Daily Eagle later commented that he "probably engaged in more real estate transactions than any other man who ever lived in New York City."  Two years before purchasing the 67th Street house he sold his railroads to August Belmont.

The millionaire would not enjoy his new home especially long.  On October 19, 1884 the Philadelphia newspaper The Times reported "Colonel Vernon K. Stevenson, the well-known Southern railroad man, died...on Thursday, in his seventy-second year."  Following his funeral Stevenson's body was taken to Nashville and placed in the family tomb.

On December 5, 1890 the New York Herald reported "Miss Eloise Stevenson was another bud who entered New York society yesterday afternoon.  A reception was given for her by her mother, Mrs. A. L. Stevenson, No. 9 East Sixty-seventh street."

Once her daughter was properly introduced, a society mother's next focus was finding her an appropriate husband.  And it did not take long.  On November 10, 1891 The Sentinel reported "There was a quiet home wedding at the mother of the bride, Mrs. Stevenson, at No. 9 East Sixty seventh street, New York, last Thursday at noon, the parties being that keen young sportsman, Mr. James P. Kernochan and the graceful horsewoman, Miss Eloise Stevenson."  The article noted that Kernochan's father was building a "pretty cottage near Hempstead" for the couple "so that hunting with the Meadowbrook hounds, a sport which Mr. and Mrs. James P. Kernochan dote, lies at the very door."

Mitchell was an anti-Tammany politician.  In 1894 he had been elected to Congress "having beaten Tammany Hall in one of its strongholds," said The Brooklyn Daily Eagle.  On April 16, 1896 he married Lillian Talmadge of Brooklyn and the newlyweds moved into a mansion on Washington Square.  The same year they moved into the 67th Street house a son was born, John Murray Mitchell, Jr.

The couple were members of the "Tuxedo set" and Mitchell was a prominent yachtsman.  "Few New Yorkers belonged to so many clubs as he did," said The Brooklyn Daily Eagle.

The Mitchells entertained lavishly in the 67th Street house.  On January 23, 1903, for instance, the New York Herald reported on the reception and musical they gave the previous evening.  "About one hundred and twenty-five persons were invited."  The article said this was the first of several concerts Lillian intended to give that season.  "The guests were seated in the large hallway, in which there is a magnificent organ, with manuals on one side and the pipes on the other.  This hall is filed with antique furniture, including a carved chapel seat of the sixteenth century and many beautiful tapestries."

In 1904 the Mitchells completed construction on their new Tuxedo Park country estate, Craghurst, which was reported to have cost $500,000, or about $14.8 million today.  But tragically the 47-year old Mitchell was battling cancer.  He died in the new summer home on May 31, 1905.

Lillian initially leased the house to Charles Chauncey Stillman and his wife, the former Mary Estelle Wight, in February 1907; but she would never return.  The couple purchased the house and in 1912 hired the architectural firm of Hiss & Weekes to completely remodel it into a modern up-to-date home.

The brownstone front was removed and replaced with a limestone facade in the neo-French Renaissance style.   The architects did not go so far as to move the entrance to street level, as was being done in most such renovations; but replaced the brownstone stoop with a limestone version.  A striking stone balcony with pierced railing ran the full width of the second floor and the slate-shingled mansard was dominated by three shoulder-to-shoulder stone dormers with elaborate pediments and finials.

The Stillmans' story was a romantic one.  Mary, who was born in Augusta, Maine, was a trained nurse.  She was working in a Boston hospital when Charles, a student at Harvard, was brought in seriously ill.  The New York Times later reported that Mary "nursed young Mr. Stillman back to health."  The couple was married in the fall of 1903.  They now had three children, Elizabeth Goodrich, born in 1905; Chauncey Devereux, born in 1907; and Eliot Wight, who arrived in 1909.

Stillman was a financier and son of millionaire banker James Jewett Stillman.  James J. Stillman died in 1918 leaving an estate of more than $40 million.  The New-York Tribune reported that Charles and his two brothers, James and Ernest, each inherited $9,694,561.  Charles's windfall would be the equivalent of about $165 million today.

The family maintained a large country estate, Kenridge, at Cornwall-on-Hudson.  Their Manhattan mansion was filled with choice artworks.  On September 23, 1921 the New-York Tribune reported that Stillman had placed on permanent loan to the Metropolitan Museum of Art 12 old masters, including Rembrandt's Portrait of Titus.

At the time of the generous loan Mary was confined to her bed.  She had suffered a debilitating stroke the year before.  She died on September 24, 1925 and Charles survived her by less than a year, dying on August 16, 1926.

Eliot Wight Stillman was killed in an automobile accident in Arizona in 1928.  His brother and sister remained in the 67th Street house and Kenridge.

Both were young adults now.  Elizabeth had received a privileged education, having attended the exclusive Miss Chapin's and Miss Walker's Schools.  She was a member of the Junior League and the Colony Club.  Charles Devereux Stillman announced her engagement to Langbourne Meade Williams, Jr. on April 17, 1930.   The wedding took place in St. John's Church in Cornwall, New York, on September 27 that year with Charles giving the bride away.  The reception was held in Kenridge.  The New York Times reported "The rooms were decorated with wild asters, orange chrysanthemums, and Autumn leaves."

Within a decade Charles sold the family home.  In 1945 the Douthitt Galleries operated from the ground floor and in 1949 a conversion resulted in three apartments in the basement through second floors, and two each on the third and fourth.  The stoop was removed at this time.

Living in one of the top floor apartments in 1975 was 51-year old Jan DeVroom and his 26-year old roommate.  DeVroom did not work, but lived off the income from investments.  At around 8:00 on the evening of November 14 the roommate discovered DeVroom dead on the kitchen floor, having been stabbed multiple times.  Henry Geoghegan was later arrested for the murder, which the prosecuting attorneys said "was part of a plot to embezzle money from Mr. DeVroom."

The house was owned by Janna Bullock in 2005 when she first attempted to sell it, asking as much as $35 million at one point.  But three years later it was still unsold.  But then she received permission from the Landmark Preservation Commission to recreate the limestone stoop and entrance.  As the restoration was nearing completion in November 2008 she found a buyer, who paid just under $25 million.  The New York Times remarked on January 16, 2009 "It has 10 fireplaces with carved stone mantels, a terrace and 13,000 square feet of space."

The new buyer returned it to a single-family home.  But those ten fireplaces and carved stone mantels would not survive much longer.  Gary Shoemaker Architects was commissioned to do a gut renovation of the house.   Only the shell was preserved for what the engineering firm describes in its website as "the improved townhouse."