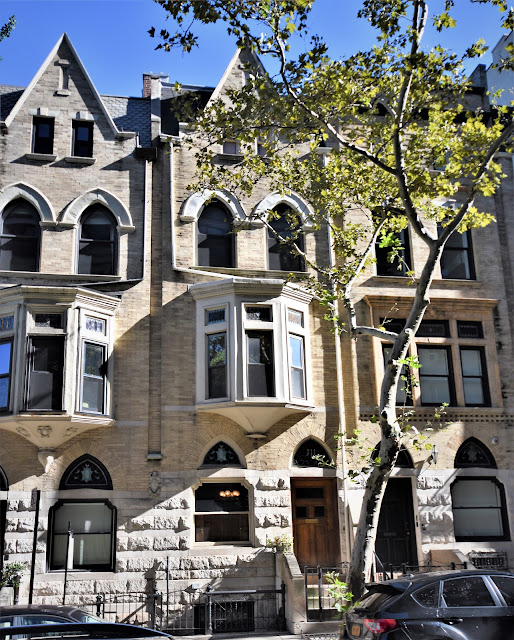 In 1894 the name of Bernard S. Levy was familiar among real estate operators.  For more than a decade he had feverishly erected rows of homes along the blocks of the Upper West Side.  His houses often stood out with unusual architectural touches--notably his two rows of Moorish-influenced residences on West 78th Street designed by Rafael Guastavino in 1885.   He now struck out on an equally distinctive project.

On February 17, 1894 the Real Estate Record & Guide reported that Charles H. Israels was working on plans for "five private houses to be erected for Bernard S. Levy & Son" on West 80th street,between West End Avenue and Riverside Drive.  (The writer got the number wrong; there would be six, in a balanced A-B-A-A-B-A pattern, Nos. 307 through 319.) 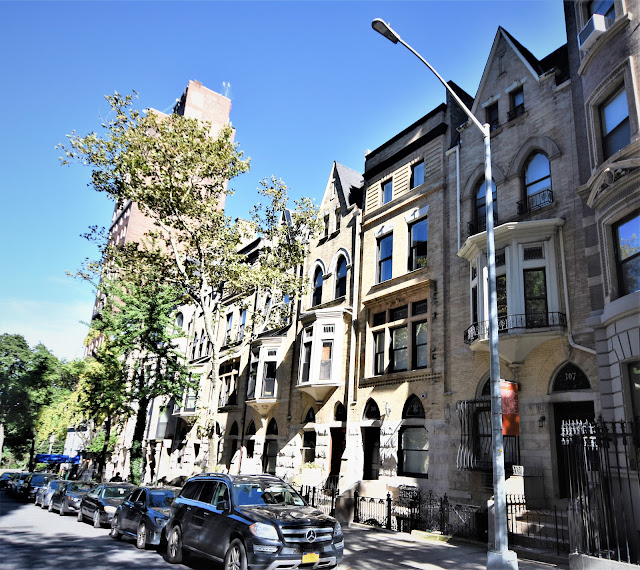 "The houses are to be of the American basement plan, with kitchens and pantries in the extension, are to be three-and-one-half stories in height, [and] will have first-class appointments," it said.

While the article commented that the facades would be of buff brick and limestone; it did not mention their design, the most compelling aspect of the project.  Israels produced a picturesque row of neo-Gothic homes (two of them splattered with Renaissance touches) designed to make heads turn.   Above each of the parlor floor openings Israels inserted triangular stained glass windows that cleverly implied Gothic pointed arches.  The address of each house was worked into the panels above the doorways.  Stained glass reappeared in the transoms of the upper floors.

Like the other "A" houses, No. 311 featured a charming three-sided oriel at the second floor, pointed arched openings on the third, and attic windows with surprising splayed lintels and keystones (more expected in a neo-Federal design).  A blind slit opening in the gable suggested medieval lancers shooting arrows from the rooftops.


Levy was often parsimonious with the proportions of his projects.  Despite the "first-class appointments," the homes were just 16 feet wide.  At a time when houses steps from Riverside Drive normally spread out approximately 20 feet or more; Levy was able to shoehorn one extra building into his row.  Nevertheless, the $13,000 construction cost for each, about $382,000 today, attested to their high-end nature.

No. 311 was purchased by attorney James Richards.   A member of the law firm Coudert Brothers, he had married Louisa Caroline James in February 1866.  The couple was well-connected socially, and Louisa's name routinely appeared in society columns.

On December 18, 1895, the year after they moved in, for instance, The New York Times announced "Mrs. James Richards...will give an informal tea in honor of Mrs. Craigie, (John Oliver Hobbes) the English authoress, on Friday afternoon."

The plays and novels of Pearl Mary Teresa Craigie, who used the pen name John Oliver Hobbes, were highly popular at the time.  That she was a house guest of the Richards for at least a month was not surprising--she was the daughter of James' brother, John Morgan Richards.

The couple would not remain in the 80th Street house for long.  On March 5, 1896, The New York Times informed its female readers that "Mrs. Richards will receive tomorrow at her present home, 311 West Eightieth Street, and on succeeding Fridays at her new residence, 93 Riverside Driver."

No. 311 became home to the Herbert G. Groesbeck family.   The Groesbeck's son, Henry, Jr., was four years old at the time.  By the time he was a young adult it was his name that most often appeared in society columns.  Following the debutante reception for Dorothy Legg Howard on November 22, 1913, for instance, the 21-year old appeared on the guest list of "young men" invited to supper and a play.

Herbert Jr. was a successful artist by now, designing covers for the Saturday magazine supplement of the Evening Post, for instance.  He put his career temporarily aside, however, when world war broke out in Europe.   He had achieved the rank of lieutenant U.S. Army Reserves by the spring of 1918 when he proposed marriage to Amy Brandish Johnson, the stepdaughter of Army Colonel William Graves Bates,

In announcing the engagement on March 24, 1918, the newspapers focused on Amy's social position (The Sun mentioned she "has taken part in many of the Junior League entertainments" since her debut).  Herbert was stationed at Camp Dix at the time.

Many wartime engagements were hurried along by the possibility of the future groom's deployment.  The wedding took place within the month, on April 22, in the fashionable St. George's Church on Stuyvesant Square.  It was, as expected, a military affair with the ushers in uniform.

Herbert was soon shipped out to France with the 309th Machine Gun Battalion.  Less than seven months later the Groesbecks received a knock on their door.  The Sun reported on November 24, "First Lieut. Herbert Groesbeck...was killed in action in France on November 1, according to advices received yesterday from Washington by his parents."

A year to the day after Herbert's death, The Sun reported that the Groesbecks had sold No. 311 to T. Henry Clarkson, an executive with Lord & Taylor department store, and his wife, Jessie.  Clarkson, whom The Haberdasher magazine remarked "is of the well-known Clarkson family of athletes of a generation ago," was better known for his gamesmanship than his business acumen.  The article noted that he "is today one of the best amateur billiard players and golfers in the United States."

Clarkson had already established himself in the Upper West Side billiards community.  On December 7, 1919 The New York Times reported "Members of the Amateur Billiard Club of New York will formally open their new room at Seventy-fourth Street and Broadway on Wednesday night.  T. Henry Clarkson, the Class A amateur, formerly of the Boston Athletic Association, will meet the champion, Willie Hoppe, in a special exhibition match."

But the Clarksons apparently purchased No. 311 as an investment.  Within a month of taking title they leased it to John Herck, principal of the brokerage firm John Herck & Co. and officer in the banking firm Houston, Haverbeck & Co.

Although successful and wealthy, Herck had a skeleton in his closet that was hard to overlook.   In February 1912 he married Sabina Bornefeld, a 16-year old girl who sneaked away from her parents' home.

The reality of life with her new husband did not match Sabina's romantic visions of marriage.  On March 1 she and an 18-year old friend, Lillian Walker, signed a death pact.   Sabina then swallowed carbolic acid while inhaling gas fumes.  Lillian got cold feet and did not attempt her own suicide.

The girls had written two notes, once read:

We have been mistreated and have decided to leave this world.  Tell all of our relatives to be good to our memories and to forgive us.

And the other said:

To the General Public and All Concerned:  We, Sabina Herck and Lillian Walker, are taking our lives
because we are very, very unhappy.  Please do not condemn us for our act, but have pity on us.  All mothers beware with whom your daughters associate.

Sabina's mother had been clear in her feelings.  The New York Times reported that she said "I am going to kill John Herck.  He first ran away with my daughter, and now he has driven her to her death."

Of course, Betty Bornefeld did not kill John Herck and he lived in the 80th Street house until 1921 when he moved to an apartment at No. 258 Riverside Drive.

No. 311 became the center of a nationally-publicized custody case in 1930.  Ruggerio Ricci was 9 years old and a musical prodigy.  In the fall of 1929 he had "created a sensation," according to The Times, when he appeared with the Manhattan Symphony Orchestra.

The boy and his 8-year old brother, Giorgio, were living with violin coach Elizabeth Lacky on West 97th Street.  Also living there was Lacky's housekeeper, who acted as nurse and "personal custodian" of the children.  The boys' parents lived in California.  But when Lacky petitioned the courts for legal guardianship in April 1930, Pietro Ricci and his wife headed to New York, leasing No. 311 from the Clarksons.

According to Ricci, he "was not permitted to see his two sons, after separation from them for sixteen months," and claimed he walked up and down on the sidewalk in front of Lacky's house, hoping to see them.  On May 29, 1930 he told the court, according to The Times, "that he was not trying to gain custody of his children for monetary purposes, but that he had wealthy, philanthropic friends who were interested in the children's musical education and not in their exploitation."

Exploitation, he claimed, was exactly what Elizabeth Lacky had on her mind.  "I am informed that she had entered into contracts compelling Ruggiero to give ten public concerts within a short space of time, and believe it will be injurious to the health and welfare of my son."

At the time the boy had earned more than $55,000 in today's dollars in just two concerts--one in Carnegie Hall and another at the Ann Arbor Beethoven Festival.  That money was in a bank account frozen by the courts.

The heated court battle went on for months, with esteemed musicians attesting to Riggerio's musical genius and experts testifying on both sides regarding whose guardianship was in the best interest of the boys.  In the end it was decided over pudding.

Following dinner on the night of December 1, with the trial ongoing, Elizabeth presented bread pudding for dessert.   It was left over from a day or two before and Ruggerio and Giorgio asked for ice cream instead.  When Elizabeth did not comply, she said they "demanded ice cream" and "when the ice cream was not forthcoming they sulked."

Later she checked on the boys and found their beds empty.  Fearing they had been kidnapped, she called the police.  An investigation quickly found them at their parents' house where, presumably, ice cream was forthcoming.

Justice Valente ruled that because the boys had "left Miss Lackey's home of their own volition," they would remain in the Riccis' custody.  Elizabeth Lackey seethed "They have turned upon me and once they have done that, it is quite likely that they would turn on me again."

Ruggerio Ricci, incidentally, went on to a remarkable career, performing more than 6,000 concerts in 65 countries and making more than 500 recordings. 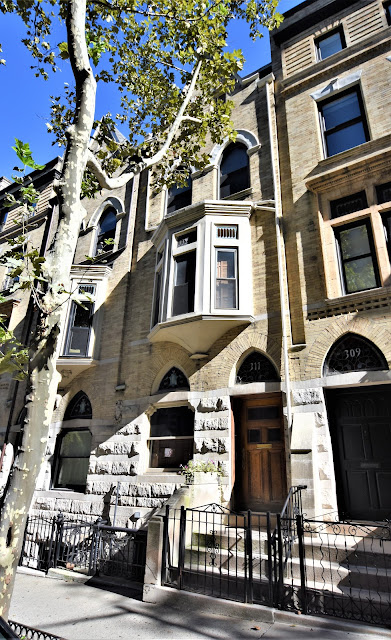 Hangley sold No. 311 in June 1937 after buying No. 44 Riverside Drive.  The new owners were Dr. Robert H. F. Dinegar and his wife, Caroline (known as Carrie).  The 41-year old Dinegar was on the staffs of the Roosevelt Hospital and the Lincoln Hospital, and had just been hired as medical director of The New York Daily News.

While he was still in medical school Dinegar had served in the Army Medical Corps during World War I.  He graduated from Columbia University's College of Physicians and surgeons in 1919, later instructing there in physiology, anatomy and surgery.  By the time he and Harriet moved into the West 80th Street house their three children, Wilbur, Robert and Caroline, were grown.

Most likely because of its narrow proportions, No. 311 was never divided into apartments.  The New York Times reported in 1993 that it was sold to a "young couple" for $897,000--equal to around $1.5 million today.

Other than replacement windows, little is changed to the Richards house after a century and a quarter.  Even the original interior shutters can be glimpsed through the second story windows.