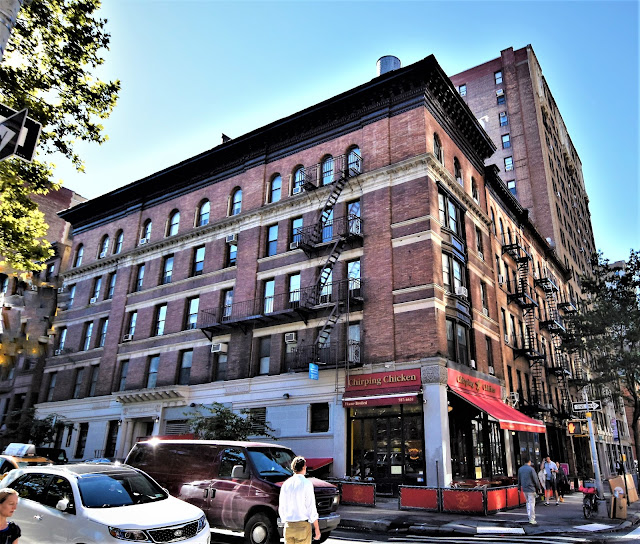 In 1892 developer George R. Dunn began construction on a five-story flat and store building on the southeast corner of Amsterdam Avenue and West 77th Street.  It was designed by George Keister whose apartment buildings, private homes and resident hotels often overflowed with decorative elements.  That would not be the case with No. 172 West 77th Street, completed in 1894.  But while the overall design was, frankly, unremarkable, Keister included details which stand out.

The stone base included two shops--one opening onto the avenue, the doorway to the other nestling next to the main entrance on 77th Street.  The four stories of Roman brick above were enhanced by limestone bands and a stone cornice at the fourth floor.  Three slightly faceted metal bays on the avenue elevation added interest.  A projecting, bracketed cornice capped the design.

Keister strayed from his overall style with the Romanesque Revival granite capital of the ground floor corner pier.  Here two female faces--one with a slight smile, the other more serious--stare out from intricately carved floral forms.  Additionally, the areaway railings took on the Northern Renaissance style in their wonderful cast iron posts in the form of dragons. 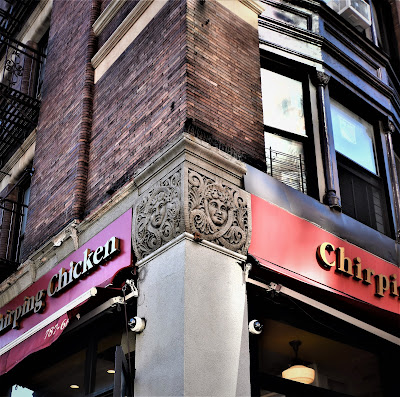 Keister's most eye-catching detail, however, was the 77th Street entrance.  Here solid wing walls morphed to pedestals for stone columns, the straight fluting of which changed to spiral.  They upheld an entablature where charmingly carved with two chubby naked children play tug-of-war with a banner announcing the building's address.  Directly above, a stone balcony spanned the main entrance and that of the 77th Street shop.  It would originally have held an iron or stone railing


Dunn called his new building The Levridge.  The term "flats" or "French flats" was intended to distinguish such structures from tenements (although, technically, at the time there was no official difference).  It would be a few years before the term "apartments" came into wide-spread use.

Suites in The Levridge were spacious--either six or seven rooms each--and while tenants did not enjoy the amenities (like maid service) of more upscale buildings, advertisements did note "hall attendance."  (Hall attendants customarily wore uniforms and were on hand in case a resident needed help with packages or similar tasks.)  Rents ranged from $600 to $1,080 a year, or about $1,400 per month for the cheapest today.

The two stores were leased to M. Foster's drug store and C. H. Magna & Bro. grocery.  The Magna brothers, William and Clamor, operated two other grocery stores in the neighborhood, both on Columbus Avenue.

Most landlords on the Upper West Side happily accepted theater people--a group not welcomed in many parts of the city.  Consequently No. 172 (the name Levridge had been quickly dropped) became home to several well-known thespians.

By 1902 the Byron family lived here.  Oliver Doug Byron was described by The Evening World as "the well known actor," and his wife, Kate Byron,was "long a prominent figure on the American stage, according to The New York Herald years later.  Their son, Arthur, entered a stage career at the age of 17, in 1889.  The Evening World, on February 17, 1902 said he "comes naturally enough by his talent for acting."  Indeed, not only were Arthur's parents well-known by theater audiences, his aunt, Ada Rehan was a true star.

Kate's three siblings, Ada Rehan, William Crehan, and Hattie Russell, lived together in a house on West 93rd Street.  When William died late in 1903, Kate was appointed sole executor.  Crehan was apparently partial to Ada, for he gave Kate and Hattie each one-fourth of his estate, and Ada one-half.  Newspapers were most interested in a specific bequest, however.  On December 16 The New York Herald ran a headline "Leaves Parrot to Miss Ada Rehan."  The New York Times headline was similar and the article noted "Mr. Crehan also left his pet parrot, Poll, to Miss Rehan."

Two other residents involved in the theater were Max and Gertrude Hoffman.  Neither was an actor, but they produced plays and vaudeville acts.  On April 1, 1906, for instance, The Sun reported on a "the extra attraction" coming to the Hammerstein Theatre, called "The Swim."  "There will be produced for the first time in New York a singing and dancing act with fourteen people, arranged by Harry Williams and Max Hoffman, and staged by Gertrude Hoffman."

Gertrude's name appeared in newspapers for far different reasons on May 4, 1909.  The day before Antonio Pagliaro had been arrested and charged with felonious assault.  The New-York Tribune explained "Mrs. Holman alleged that the prisoner stabbed her as she was about to enter a drug store on Sunday night."

The tenants of No. 172 continued to be well-respected and financially well-off, most having at least one servant.  None would seem to be more so than James Philip Gilroy, the son of former Mayor Thomas J. Gilroy.  But domestic tranquility turned to upheaval by the spring of 1910.

Gilbroy had a responsible position with the O. J. Gude Company, earning $6,000 per year (a satisfying $160,000 today).  But his wife, the former Nina Huntley, accused him of drinking to excess.

On April 30, 1910 The New York Times reported "When Gilroy was not drinking in 1908, Mrs. Gilroy says, he was an exemplary citizen and a model husband."  But even Gilroy admitted that that year he began drinking too much.  So he "took the pledge" in church to abstain in 1908 and, according to him, "hasn't taken a drink since."  Well, "except those which are occasionally necessary in my business."

Calling his wife "this sweet-scented geranium," Gilroy told the judge that if he had drunk at all, it was because he was driven to it by Nina's conduct.  He said she was in the habit of accepting presents from "gentlemen friends."  The Times reported "As the result of their generosity he says, she has thousands of dollars' worth of jewels and a bank account of $3,000."  Furthermore, she "buncoed" him out of $275 when she claimed she needed to make a payment on a sealskin jacket.  He later found out that it was the gift from a man.

The back and forth he-said-she-said in the courtroom was dizzying.  Nina then said he had become "very disagreeable" since returning to drink.  "She says he broke her nose when he saw her kiss a man in a taxicab," reported The Times.  And Gilroy said it was Nina who was the drinker.

He told the court of one occasion when "his wife came home drunk and fell down stairs.  She flew into a rage and tore the curtains from the windows and threw them and the poles into the street...Then he says she pitched into him with a carving knife."

A maid, Mary Swarni, gave damning testimony.  The Times said she "testified that Robert Butt, to whose friendship for his wife Gilroy objected, was a regular caller during the afternoons, and that Mrs. Gilroy sent her out to take a walk around the block during his calls."

A much less controversial couple in the building were broker William E. Pearl and his wife.  Pearl had organized the Wall Street firm of P. T. Adams & Co. in 1889.  Following his death in 1905 his wife remained.  The apartment was the scene of her sister's funeral, Helen Schuyler Morse, on January 4, 1918.   She was active in social events, and when series of lectures was planned in the Plaza Hotel to benefit the Bethany Day Nursery later that year, The Sun noted "The tickets for the lectures may be obtained from Mrs. William E. Pearl, 172 West Seventy-second street."

By the time of the lectures, the store space facing Amsterdam Avenue was home to the Lotus Restaurant.  On January 17, 1920 Prohibition went into effect, a federal law not precisely followed by proprietor Henry Wertheimer.  On April 10, 1922 The New York Herald reported that Wertheimer was charged with violating the Volstead Act and was summoned to appear that day before United States Commissioner Samuel M. Hitchcock.

Victorian flats had fallen from favor among well-to-do apartment dwellers by now.  Jazz Age buildings with modern amenities were the new fashion.  Once home to respected citizens well-known among West Side society, No. 172 West 77th Street now attracted some less-than-savory tenants.

Among these was 29-year old Melvin Dunham.  He and Sidney Szarn had successfully committed several hold-ups when their criminal careers met an abrupt end on September 27, 1925.  At around noon that day the pair walked into the United Cigar Store at 60th Street and Broadway, brandishing handguns.  The Times said that "without any preliminaries" the crooks ordered the clerk into a rear room.  But as soon as the door was locked their victim began shouting, causing them to flee.

A police car was passing by just as they ran out of the store.  Patrolman John J. Leahy pursued them, nabbing the pair on 60th Street near Columbus Avenue.  The article said that "several hundred persons" watched the half block chase.  Melvin Dunham would not be returning to his West 77th Street apartment.  The $53.75 they stole from the cash register would earn them both long prison sentences.

On October 15 The Times reported that before Judge William Allen imposed his sentence, he questioned Dunham.

"Why did you resort to robbery?"

"Well, Judge," Dunham answered, "we read how easy it was to get away with it, and so we did it."

The judge did not consider that an adequate excuse.  Both men received sentences of between seven and a half to fifteen years in Sing Sing.

The mid-century years were not kind to No. 172 West 77th Street.  A third store was added by 1949, and at some point the doorway to the easternmost store was bricked up, creating an awkward asymmetry to the balcony.  Then, in 1971, the stores were consolidated into a single space for the Cuban restaurant Los Dos Hermanos. 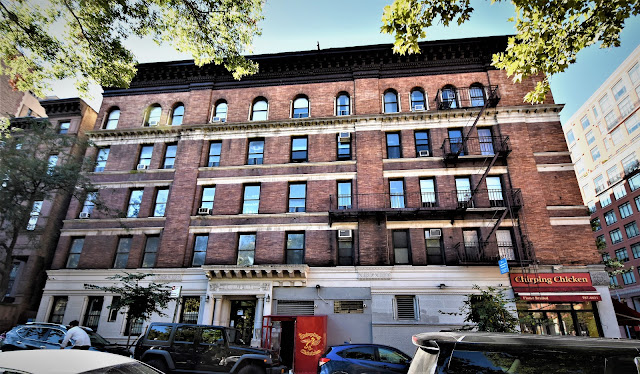 The restaurant lasted in the space for years, garnering praise from food critics like New York magazine's Linda Wolfe and The New York Times' Raymond Sokolov.  It was followed around 1992 by Wildlife, a trendy bar.

No. 172 West 77th Street received horrific press coverage that year.  Resident Troy A. Rivera moved in after being released from prison in 1990 for attempting to sexually assault a young boy.  At some point, possibly in prison, he had contracted the HIV virus.

He began taunting children with obscene jeers as they walked to school.  His behavior progressed to mingling with children at the playground across the street from No. 172, despite his parole officer having explicitly prohibited him from being in contact with youngsters.

A neighbor, Sarah Rodriguez, later told police "He used to come down at 7:00 in the morning.  He'd stand on the stoop.  He'd say something to every kid who walked past.  He'd say, 'I like your butt.  Can I have your butt?'"  Nevertheless she did not think it was her responsibility to report the behavior to police.

Sarah's husband, who was the super of the building, received numerous late-night complaints of "prostitutes, transvestites and young men" (all under 17 years old) coming and going from Rivera's fourth floor apartment.

On January 14, 1992 the unthinkable happened.  Rivera grabbed an 11-year-old boy as he walked to school alone.  Rivera forced him up the stairs and into his apartment, where he forcibly sodomized him.  The heinous crime was the talk of the neighborhood and the city for weeks.


Rivera was, of course, an anomaly among the tenants of no. 172.   From a broad range of ethnic backgrounds, they were on the whole hard-working, middle class families.

After more than 120 years the delightful carved address banner still brings a smile to passersby who happen to notice it; and the scary cast iron dragons no doubt continue to cause a few toddlers to pause.