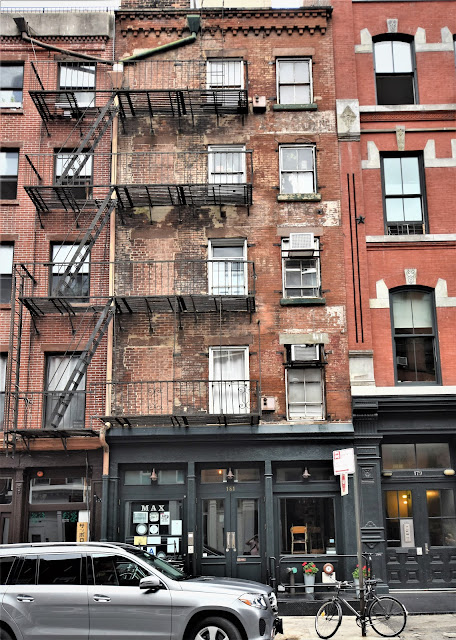 The labor shortage caused when blue collar New Yorkers were sent off to fight in the Civil War brought construction to a near halt.  Following the conflict New York would experience a building boom that transformed the Tribeca district.

But a year before the last shot was fired in the war Levi Rowley and his wife, Mary, were making their own changes.  They acquired the old wooden building at No. 181 Duane Street and in 1864 began construction of a five-story store and loft building.  The architect, whose name has been lost, created a no-nonsense utilitarian structure of red brick trimmed in stone.  The cast iron storefront was attractive, if unexceptional.  Title to the new building was put in Mary E. Rowley's name.

New York City had around 30 coffee roasting firms by the time No. 181 Duane Street was completed.  In his 1922 book All About Coffee, William H. Ukers explained that in 1846 James W. Carter had devised his "pull-out" roaster.  "This machine, and others like it, encouraged the development of the coffee-roasting business, so that when the Civil War came, coffee manufactories were well scattered over the country."

Levi Rowley was the head of Star Coffee Mills.  Established around 1823 it was one of the first wholesale coffee roasting firms in Manhattan.  According to James W. Carter, "under his able direction the business flourished."  He now moved the operation into the new building.

Another coffee dealer, Abell & Morton, shared space by the early 1880's (possibly leasing the store and basement only).  That company installed a new boiler and flue in the cellar in 1883.

In 1885 the 67-year old Rowley sold Star Mills to Theodore L. Benedict and Robert G. Thomas who renamed the business Benedict & Gaffney.  Among its employees was Lawrence Cummings, a salesman who routinely called on grocers.  The 45-year old left No. 181 Duane Street on September 17, 1890 as usual, but this time he never returned.  The Sun reported that he "left there on Wednesday evening to make his rounds among the groceries of the west side.  He did not return all day."

Cummings lived in the Morrisania area of the Bronx with his wife and five children.  The mystery of his disappearance ended tragically.  On September 19 The New York Times reported "The body of a man found yesterday morning in the Harlem River, at the foot of East One Hundred and Fifty-third Street, was identified later in the day was that of Lawrence Cummings, a salesman for the tea [sic] house of Benedict & Gaffney."  The Sun added, "It is thought that the drowning was accidental as no cause for suicide can be found."

Early on the morning of April 15, 1891 a foot patrolman saw flames licking from a third story window of No. 181 Duane Street.  The Evening World reported that Engine Company 27 responded, and that Captain Farrell "at once sent out a second alarm, soon followed by a third."

The article said "The two top stories were completely gutted.  About $5,000 worth of coffee and spices went up in smoke, and all the machinery for grinding coffee and spices were ruined."  A reporter got nowhere in interviewing Thomas H. Benedict.  "Mr. Benedict was too much excited this morning to estimate his loss.  Besides, he said, it was none of the public's business."

Nonetheless, the newspaper reported damage to the building at $5,000 and the loss on the machinery and contents at about $15,000 (about $417,000 today).    The repairs to the building included some replacement sills and lintels.  It was most likely at this time that the interesting brick corbel table and dentiled brick cornice was installed.

Benedict & Thomas was the victim of a surprising gang in the summer of 1895.  Twelve-year old Peter Koohl organized a crime ring that included 11-year old Thomas Ryan, 12-year old Jacob Bardelo, and 9-year old Fred Billy.  The Evening World said he "compelled the other boys to accompany him under threats of a beating."

They started out with simple vandalism, smashing store windows.  But on August 27 the newspaper reported "The boys were lively Sunday night, and robbed Theodore Benedict's tea and coffee store at 181 Duane street; a cigar store at Duane street, near Broadway, and a harness store at 71 Warren street."  Among the loot taken were whips, valued at $1.25.  Koohl sold one to a boy on West Broadway for a penny, and Fred Billy sold another for two cents.  He got a nickel from an Italian fruit vendor at Jay and West Streets for six pounds of sugar.

The hooligans may have gotten away with the crime spree had Koohl not gotten too bold.  He stole a peddler's horse and wagon and headed to Harlem where he attempted to sell it.  "Failing in this," said The Evening World, "he abandoned the rig."  The boys were arrested and in the Tombs Court on August 27 where they "acknowledged their guilt and were remanded in care of the Gerry Society."  (The "Gerry Society" was the commonly-used term for the Society for the Prevention of Cruelty to Children.)

On June 21, 1896 The New York Times ran a full-page article complaining about merchants who blocked the sidewalks in front of the businesses.  Subheadlines accused "In Defiance of the Law and the People's Welfare They Occupy Public Property / Poor Excuses Offered For Official Neglect."

Among the businesses against which the article railed was Benedict & Gaffney.  "This firm has a little platform of its own, but as it seems to be inconvenient to lumber public premises which the firm considered its own, boxes, barrels, bags and other truck are piled on the sidewalk, over which it would, perhaps, be conceded that the public has technical rights."

Theodore L. Benedict and Robert G. Thomas amassed significant personal fortunes from the coffee business.  In 1899 Benedict enlarged and remodeled his country house in Oyster Bay on Long Island's Gold Coast.  He went to the top of the heap in choosing the architectural firm of Carrere & Hastings.

At the time Mary E. Rowley had partnered with broker Remsen Appleby, owner of the building next door at No. 183.  In May 1899 she hired architect George Fink to do minor upgrades to both buildings at a cost of $107.

In 1904 Robert G. Thomas took on a new partner, Henry D. Turner, changing the firm name to Thomas & Turner.  The partnership was short lived and by 1908 it was named Robert G. Thomas & Son.   The successful business spread into the building next door around this time.

The Duane Street block was part of the "Butter and Egg" district by now; a perfect location for wholesale butter and egg dealers Saal Bros.  On April 28, 1920 the New York Produce Review and American Creamery announced "Saal Bros are congratulating themselves on the purchase of the building at 181 Duane St.  It would seem that their facilities should now be ample for any volume of business that develops."  The Real Estate Record and Guide reported "The buyers will occupy the building after making extensive alterations."

Saal Bros. leased a portion of the building to J. R. Kramer's newly-established "butter printing service."  The firm provided customized butter pats to hotels and restaurants.  On June 1, 1921 the New York Produce Review confirmed that Kramer "has opened a new establishment for printing butter at 181 Duane St. in the building owned and occupied in part by Saal Bros.

The article said "Mr. Kramer has a refrigerator box in the basement and has equipped the two upper floors for the printing department in a manner to meet every requirement of convenience and sanitation.  Concrete floors with adequate drainage and thorough ventilation of the rooms permit the utmost cleanliness."

The attack on Pearl Harbor in December 1941 pulled the United States into World War II.  Almost immediately the Government issued wartime restrictions on silk, rubber, gasoline and certain food items--wheat, butter and cream, for instance.   In 1943 an inspector discovered contraband hidden in Saal Bros.'s storage.   Magnistrate Raphael P. Koenig unleashed his fury on the company, handing them a record fine of $250 on September 10 for "illegally possessing 200 quarts of heavy cream."

In imposing the fine, he said "Had an individual been the defendant in this case, I certainly would have sent him to jail for a long term."  He announced that the five cans had been secreted in Saal Bros's egg refrigerator.  "This corporation deliberately tried to deceive me...With conditions as they are, nothing is more important than the protection of our food supply."

It was Saal Bros.'s tenant, Charles E. Krasnoff who was in trouble with officials the following year.  On October 8, 1944 The New York Times reported that the butter and egg dealer was named in an injunction by the Regional Office of Price Administration for purposely mislabeling B and C grade butter as "top-grade AA butter" and selling it at top-grade prices.

Manhattan's butter and egg district remained in the Duane Street neighborhood for decades.  At mid-century No. 181 was home to Hunter Farm Company, another dairy products firm.

But the Tribeca renaissance would catch up with the block towards the end of the century.  By 1996 the ground floor was home to Fred Boyle Fine Arts gallery, which specialized in American realism and photo-realism paintings.


It was replaced by Luigi Iasilli's southern Italian eatery, Max Restaurant, which remains.  In 2013 a renovation resulted in one apartment each on the upper floors.  After more than 150 years of industrial use No. 181 admittedly looks a bit beleaguered today.  Having survived a major fire and with its surprisingly short list of tenants it is among the oldest commercial structures in the immediate neighborhood.