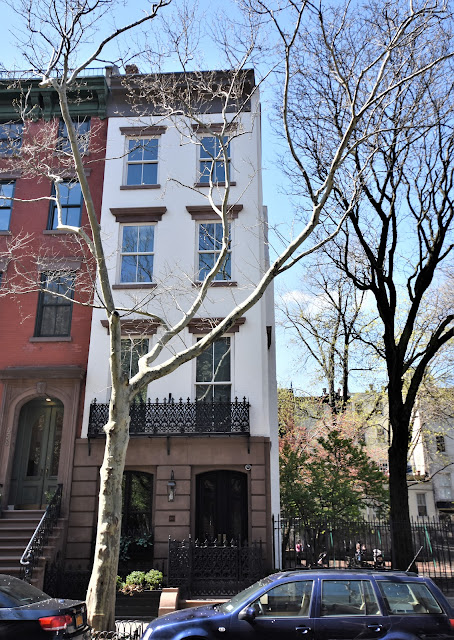 In 1854 Henry Lilleck's narrow, 16-foot wide house on West 22nd Street, just east of Tenth Avenue, was completed.  The unknown architect placed the three red brick upper stories upon a rusticated brownstone base.  Little is known of Lilleck, but his 16-foot wide understated Italianate-style home suggests he was financially comfortable; but not wealthy.  Four years after construction was completed West 22nd Street was renumbered, giving the house the address of No. 460.

Before long an office was installed, most likely in the ground floor level, and rooms rented in the house proper.  An advertisement in The New York Herald on August 16, 1864 offered "To Rent--Furnished suit of apartments for single gentlemen; single rooms and an elegant office for a doctor at 460 West Twenty-second street, between Ninth and Tenth avenues."

Within five months Joseph E. Isaacs and his wife had moved into No. 460.  Isaacs used the office for his business which bordered on a pawn brokerage.  His ad on February 17, 1865 read "Any amount to loan on Diamonds, Watches, Jewelry, Plate &c., or bought for cash, by the well known ISAACS, 460 West Twenty-second street."  Isaacs worked a long day, from 9:00 a.m. to 7:00 p.m.

In the meantime, the couple continued to rent rooms for extra income.   On January 30, 1865 an advertisement offered "two gentlemen or a lady and gentleman can have two or three handsome Rooms, elegantly furnished, with or without Board.  References exchanged.  Mrs. J. E. Isaacs."

A year before No. 460 was erected the magnificent St. Nicholas Hotel had opened on Broadway.  The marble hotel was the embodiment of luxury and only moneyed patrons could afford to stop here.  So when Isaacs received a note from Carlo Dejalis on June 1, 1870 saying he had a number of gems which he wished to dispose of, he had no reason to doubt the story.

But the following day the Indianapolis News reported "Joseph E. Isaacs, a diamond broker, was enticed to a room in the St. Nicholas Hotel, New York, yesterday morning, and there chloroformed, bound and robbed of two hundred dollars in cash, valuable rings and other property."  Another man, Joseph Cheval, had helped overpower him.  Isaacs seems to have come prepared for a transaction; his stolen money would amount to nearly $3,900 today.

But then police quickly reconsidered whether Isaacs was as a victim or an accomplice.  On June 3 the Philadelphia newspaper The Evening Telegraph explained "The singular part of the story is that the robbed man had, untouched, upon his person, after the 'robbery' was over a diamond and a ruby ring, a gold watch and chain, a diamond breastpin, and a diamond cluster brooch.  Little doubt is entertained by the more suspicious detective but that Isaacs is a confederate of the two rascals (who hail from Philadelphia), and that events will prove his complicity."

Joseph E. Isaacs escaped prosecution and he and his wife lived on in No. 460 at least through 1874.  The house was purchased by Ellen M. Robbins (an absentee landlord who lived in Connecticut) around this time.  Among her boarders in 1880 was artist Mary B. Taylor, whose work was shown in the annual exhibition of the National Academy of Design that year.

On November 16, 1881 Ellen Robbins sold No. 460 to estate attorney Hobart R. Griffin and his wife, Elizabeth.  The couple paid $9,000, or about a quarter of a million dollars today.

As had been the case with Isaacs, Griffin had a brush with bad press in 1885.  A client, Charles H. F. Ahrens, had died in 1883.  The principal in the artificial flower and millinery trimmings importing  firm of C. H. F. Ahrens Co., he left a significant estate, of which Griffin was executor.   Griffin provided the court with the required paperwork, including a detailed inventory of the personal property.   But that inventory disappeared.

Judge D. G. Rollins ordered that a copy be submitted.  That never happened.  Ahrens's heirs filed suit in April 1885 "to compel" Griffin to file an inventory.  Judge Rollins commented in court papers that although he had ordered in 1884 that Griffin file a replacement inventory, "This does not seem to have been done, the executor having contented himself with furnishing a list, not under oath, of the assets left by this decedent."  Griffin was ordered to supply the new inventory, but suspicion most likely remained, since missing from his list was "an item of money."

The Griffins sold No. 460 around 1890 to George O. Hall and his wife, Margaret.  Like Ellen Robbins, they lived far away, in Springfield, Massachusetts, and purchased the house as an investment.  And like Ellen, they have leased the house to a proprietor who rented rooms.  An advertisement on May 15 1893 offered "Handsomely furnished rooms, single or en suite bath, closets and running water."

In February 1894 the house returned to a single family home when George O. Hall sold it to Henry Lewis Marks.  The sale price is unknown, but Hall provided a $9,000 mortgage to Marks, around $253,000 today.

Like all upper-middle-class families, Marks and his wife had domestic help.  An advertisement in the New York Journal on October 10, 1897 sought a "Nurse--Girl for children, mending, assist.  Wages $8."  (The "assist" detail was the equivalent of today's catch-all phrase in job descriptions "other duties as needed.")  And two years later the couple advertised "Housework--Girl, no washing; wages $10."

The Marks family remained on West 22nd Street until March 1907, when they leased No. 460 to Marie La Montagne.  The well-to-do woman had recently sold her house at No. 24 West 54th Street, an upscale neighborhood which was seeing the encroachment of commercial buildings.

Marie, who was unmarried, came from an old New York family.  That she chose to lease the unpretentious house in what was not an especially fashionable residential district is somewhat surprising.  Nevertheless, society columns followed her movements as if she still lived off Fifth Avenue.  She summered at an estate in Woodmere, Long Island, and traveled to exotic spots and to Europe.

On January 26, 1910 the New-York Tribune reported that she "gives a theatre party this evening for her debutante niece, Miss Dolly M. La Montagne;" and on March 7 1912 The Sun noted "Miss Marie La Montagne will sail to-day for Panama and the West Indies and will return to New York on April 2."

When Marie moved on in 1913, Henry Marks leased No. 460 to Aueringer Kasper.  He and his wife renewed the lease through 1920.  When it expired that year, Marks sold the house to Susan Tarana and John Primich, who operated under the legal name of Tarana & Primich.  Polk's City Directory listed them in 1921 as operating the property as a "lodging house."

They hired architect Abraham Grossman to make renovations for "15 sleeping rooms" as described by the Department of Buildings.  A subsequent remodeling in 1946 resulted in one apartment per floor. 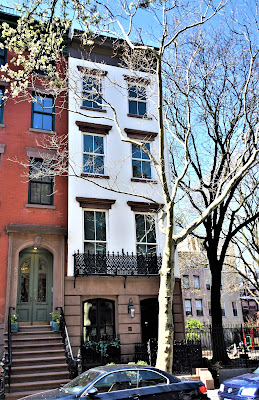 Among the initial tenants were the 36-year-old Mahonri Sharp Young and his wife, the former Rhoda M. Satterthwaite.  The following year, in April, a son was born to them.

Young's mother, the former Cecilia Sharp, was a pianist and his father was the recognized sculptor Mahonri Mackintosh Young.  Among his notable works were  Native American statues for the American Museum of Natural History.  Life magazine had called him in 1941 "the George Bellows of American sculpture."

Adding to Mahonri Sharp Young's interesting pedigree was his great-grandfather, Brigham Young, founder of Salt Lake City and leader of The Church of Jesus Christ of Latter-day Saints.

His apple did not fall far from his artistically-inclined family tree.  He was both an artist and author.  His books included The Paintings of George Bellows, Early American Moderns: Painters of the Stieglitz Group, and American Realists, Homer to Hopper.

Change was on the horizon in 2012 when William Bryan White purchased No. 460 for $4.6 million.  White, once president of the Intrepid Air, Sea and Space museum, was chairman and CEO of Constellations Group, a consulting firm.  He hired architect William Suk to reconvert the abused interiors to a single-family home.  Suk's exterior work included the restoration of the stone lintels and sills and the cornice, and reparation of the ironwork.

He additionally added windows on the blank western wall overlooking Clement Clarke Moore Park.  In approving that request the Landmarks Preservation Commission commented "This is not an architecturally significant facade."  At some point in the 20th century the upper facade had been painted white and Suk requested permission to repaint the brickwork.  Instead the LPC recommended "removing the paint, cleaning the bricks, and re-pointing as needed."  The brick was repainted. 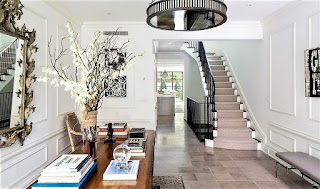 Luk's interior multi-million dollar remodeling was essentially a gut renovation; described by Stylish Homes as a "complete artisanal-renovation."  The list of guests hosted in the house by White and his husband Bryan Eure was impressive--including luminaries like Jennifer Lopez and Mark Wahlberg.

Angered over Mitt Romney's stance against gay marriage in 2012, White switched parties.  That year he hosted a $25,000-per-plate Democratic fundraiser in the house, attended by President Barack Obama.

White sold the house in December 2014 for $16 million to DRGBY Asociados LLC.  The charming facade gives no hint of the lavish interiors; looking more like the modest home it was when Henry Lilleck built it nearly 165 years ago.