On October 1, 1887 the Real Estate Record & Builders' Guide pointed out that architect J. H. Taft was "working on plans for ten first-class brown stone and brick residences, to be built by Squier & Whipple."  Joseph H. Taft was highly busy at the time on the Upper West Side; and this project may have actually been for one of his major clients, William Earl Dodge Stokes, who sometimes disguised his involvement by using the names of other builders' or developers' on the building applications.

Whoever was behind the project; it would result in Taft's producing ten upscale homes that wrapped the southwest corner of West End Avenue and 89th Street.  The Record & Guide projected that "these dwellings will exhibit some of the most satisfactory architectural work on the west side."

Although The Record & Guide described the style as "English;" the houses were in fact a showy explosion of Flemish Renaissance Revival gables and dormers, turrets and stained glass.  Completed in 1889 they cost an average of $20,000 each to build--about $531,000 in 2017 dollars.


Nos. 308 and 310 West 89th Street, at the end of the row, were near mirror-images.  High brownstone stoops lead to the entrances, outlined in foliate carvings.  A rounded bay rose three stories above the basement, culminating in a heavy stone-railed balconies  The high mansard was covered in slate shingles.   Here broad floor-height dormers were capped by dramatic, decorated Flemish gables.  At the third floor slightly projecting bays elbowed one another for space above especially charming pseudo balconies. 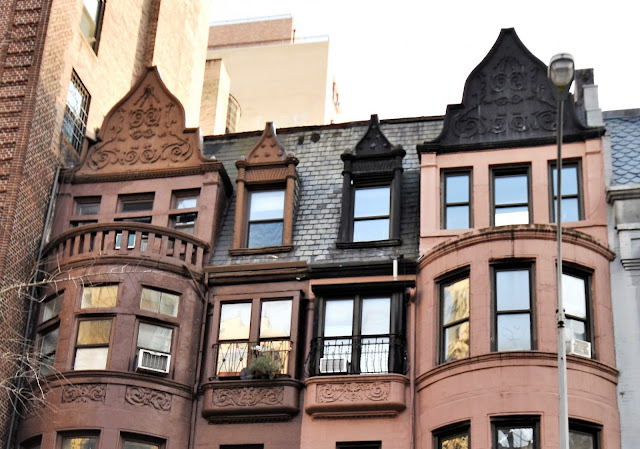 No. 310 saw a relatively rapid turnover of owners.  Matilda Blinn sold it in 1894 to Augusta Trageser for $28,500--about $810,000 today.  Augusta was the widow of John Trageser and was now president of his former firm, the John Trageser Steam Copper Works.  She remained in the house until 1905 when she sold it to Dr. Lucius Pitkin.

Interestingly, Pitkin had recently purchased and then resold the house next door at No. 308.  He had formed the Pitkin Laboratory in 1885 and in 1901 purchased the five-story building at No. 47 Fulton Street.  After renovations it became known as the Pitkin Laboratory Building and housed Pitkin's chemistry and metallurgical labs.  He soon sold No. 310 West 89th to Osmyn Perkins Conant.

The well-to-do Conant was married to the former Mary Louise Royce.  Osmyn had been an educator for years, since his graduation from Dartmouth in 1879.  The Journal of Education, in 1910 said "He was a man of unusual scholarly habits and attainments."  He was fluent in German, French, Italian and Spanish and was a classical scholar.  In 1892 he left teaching to become a partner in Ginn & Co., a publisher of textbooks.

Mary, who was known by her middle name, Louise, was nine years younger than her husband.  Her father was Vermont State Supreme Court Justice H. Charles Royce. The couple had one son, named after Osmyn's brother, Richard Royce Conant.


In the spring of 1909 the older Richard Royce Conant married Helen Hemingway.  The Anchora of Delta Gamma, Helen's college sorority newsletter, mentioned the newlyweds would be "at home May 1, at #310 West 89th St."  The reason the couple moved in with Osmyn and Louise had nothing to do with finances--both families were well off.  The arrangement most likely was due to Osmyn's health problems.


Not long after Richard and Helen moved in, Osmyn and Louise went to Europe "in the hope of regaining his health," according to The New York Times.  Nine-year old Richard stayed home with his aunt and uncle.

Osmyn and Louise traveled to the spa town of Divonne-les-Bains, France.  Ironically, it was not his failing health, but an automobile accident that caused his death there on October 7, 1910.  The New York Times reported "Mr. Conant died instantly."

Louise made immediate arrangements to sail back to New York.  But soon after boarding the tender which was conveying passengers to the steamer Kronprinz Wilhelm, she was suddenly taken ill.  She was taken to the hospital in Cherbourg, where she died on October 12.

Osmyn's will had left everything to his wife.  Hers left everything to him.  The estate was straightened out a year later, after which The Times reported on August 26, 1911 "In a house at 310 West Eighty-ninth Street lives Richard Royce Conant.  He is a year old and heir to a quarter of a million, the fortune of his parents."

The newspaper got a few facts wrong.  Richard was, in fact, now 10 years old and the estate was more than $300,000.   That error made little difference.  Richard was now the beneficiary of more than $7.75 million in today's money.

For some reason Louise's bachelor brother, 25-year old Alexander Burgess Royce, was living in the Conant house by 1919.  He was a major in the Officers' Reserve Corps of the Army.  The following year young Richard graduated from Columbia College.

One year later the older Richard Royce Conant sold No. 310 West 89th Street to Catherine Worms, who had been living a few blocks to the south at No. 503 West End Avenue.

Around the time of the Great Depression the house that had been home to a series of wealthy families was being rented as furnished rooms.  The tenant list left something to be desired, as well.

In October 1935 police broke up an "automobile stealing syndicate."  Among those arrested and charged with grand larceny was 24-year old Carl H. Oulton who lived here.  He pleaded guilty to six automobile thefts.  Investigators revealed that he had been on the run since escaping from a prison in Greenfield, Massachusetts in December 1934.

Two years later roomer Herman Rubin was arrested in July 1937.  He was involved in an enormous insurance fraud ring that collected as much as $12,000 a year for fake illnesses.  The scam included doctors who would coach the "patients" on the symptoms of heart disease.  Then, just before being examined by the insurance company physicians, the patient was injected with digitalis to mimic heart problems.

The case was not closed until July 1940.  Rubin's sentence of six months in the penitentiary paled when compared to those of the doctors. 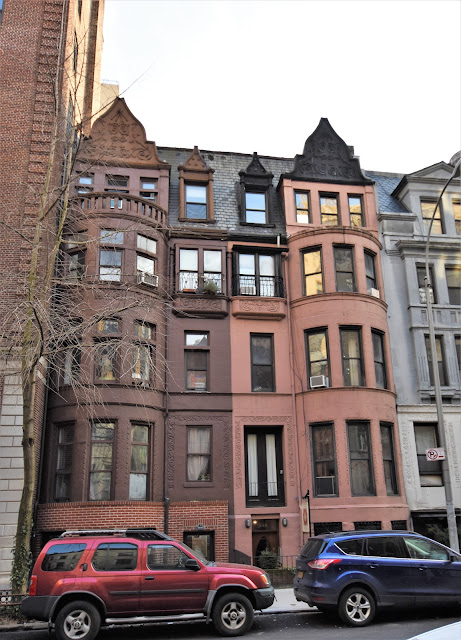 In 1971 No. 310 was converted to apartments--two per floor.  That year the stoop was removed and the entrance removed to below sidewalk level.  Despite the abuse, the house and its fraternal twin neighbor still create a charming pair; the last remnants of Joseph H. Taft's elaborate row.