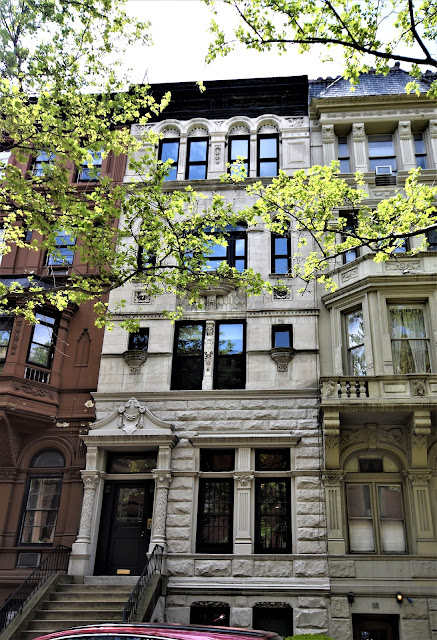 In 1886 architects Thom & Wilson designed an ambitious row of 14 upscale homes on West 74th Street between Columbus and Amsterdam Avenues for Margaret Brennan.  Completed the following year, the houses presented an exotic potpourri.  While basically Renaissance Revival in style, they were generously splashed with Gothic, Queen Anne and Moorish elements.

Among the row was No. 116 which, like its neighbors, displayed a medley of historic styles.  At four stories above a high basement level and with 21 rooms, the 20-foot wide home was intended for a well-to-do family.

The rough-cut stone of the basement and parlor levels smacked of Romanesque Revival and starkly contrasted with the refined, fluted pilaster of the double windows and the highly unusual entrance.  Here engaged columns wrapped in Moorish arabesques supported a neo-Classical cornice and pediment with delicate carved draping. 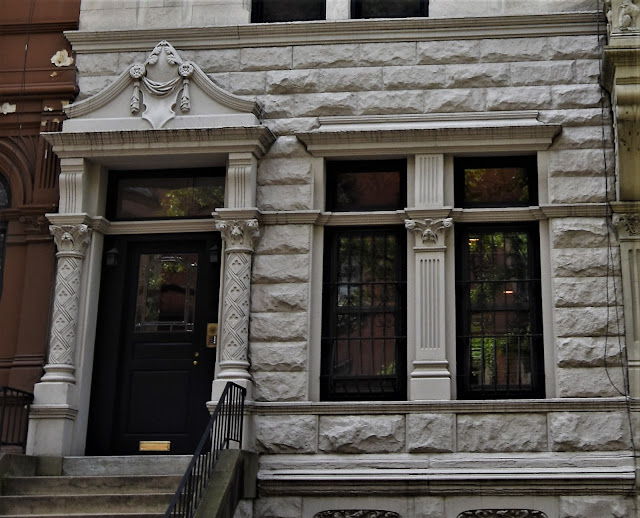 Three openings in the planar-faced middle section featured carved half-bowls which almost doubtlessly sprouted decorative iron railings.   A sedate classical caryatid separated the central openings of the second floor, and two portrait panels of cavaliers decorated the third.  The keystone of the central opening was carved with a Rod of Asclepius, the single serpent entwined staff often used as the symbol of medicine (not to be confused with the double-snaked caduceus).  The two windows on either side were crowned with Moorish horseshoe arches.


Above a projecting stone cornice the top floor was distinguished by recessed, arched windows.  Their deep hoods protected what, at first glance, appear to be shell carvings.  Closer inspection reveals they are flame-like sunbursts, a favorite Queen Anne motif.  Panels of Romanesque griffins and a neo-Classical garland peacefully coexist.

The house became home to William G. Crenshaw, Jr. and his wife, Mary.  William was a Southern transplant.  His grandfather, Jonathan Graves, had purchased a 3,000-acre plantation, Hawfield, in Virginia in 1847 for William's mother, Fannie Elizabeth, and his father.  Young William grew up in the 1790 house.

The Crenshaws were visible in Upper West Side society, attending, for instance, the "musical and literary entertainment" given by Elizabeth Kones of No. 153 West 70th Street on the evening of March 3, 1892.  The unusual program not only included the expected piano solo and singing; but a lecture by Miss Jessie H Bancraft on physical culture and "Delsarteanized" Swedish and German gymnastics.

By 1897 the Crenshaws had moved to Baltimore and were leasing the house to Captain Frederick Ford.  They sold it on 1900 to Fannie and Victor Cadieux for $30,000--about $875,000 today.  The terms of sale mentioned occupancy was "at completion of lease."

Captain Ford apparently not only left West 74th Street, but New York City in general.  An auction was held in the house in May of "all the rich furnishings and appointments."  The Stuart Art Gallery's advertisement gives an insight into the upscale nature of the house and the neighborhood.

This residence is superbly furnished in every detail and contains the very best to be found in an upper west side elite home.  The drawing-room contains many works of art, forming a choice selection of rare and costly bric-a-brac, gathered from all parts of Europe and from many of the art sales.  Roccoco drawing-room sets, Vernis-Martin cabinets, ivory miniatures and bronzes, marble statuary, superb clock sets.

A gallery of modern oil paintings by eminent artists of many of which Capt. Ford was justly proud.  Dining-room shows exquisite taste in selection of cut crystal and china...massively carved sideboard, table, chairs, cabinets, &c.

The ad went on to describe Persian and Turkish rugs, elegant bedroom furniture, a piano and mahogany tall case clock among other high-end items.

Fannie and Victor Cadieux would not hold the property long.  In 1903 they sold it to Dr. Edmund P. Shelby, who moved in in June.  Like William Crenshaw, the 36-year old bachelor had Southern roots.  He was born at Grassland, the Shelby ancestral home in Lexington, Kentucky.  He studied at Kentucky University, the University of Virginia, Vanderbilt University and New York University.  By now he was widely respected in the medical community.

Three years before Shelby purchased the house, Gertrude Singleton married author John L. Mathews in Evanston, Illinois.  Gertrude was, herself, an author and would make a significant name for herself.

In 1917, two years after John L. Mathews died Gertrude married Edmund Shelby.  The couple's broad-minded socio-political views were reflected in their activities and in Gertrude's writings and lectures.  She was a founder of the International Society of Women Geographers, wrote heavily about "Negroid peoples," according to The New York Times later, and about the folklore of Africa and Dutch Guiana.  During World War I she was managing editor of The New Letter of the Woman's Council of National Defense.

In 1921 Edmund took a stand against Prohibition by adding his name to the newly-formed 1776 Society.  The New-York Tribune explained "The society is organized especially to promote interest in the repeal of the Eighteenth Amendment and the enactment of laws encroaching upon the rights of the sovereign states to regulate and police their internal and domestic affairs."

Gertrude sometimes used fiction as a vehicle to expose racial discrimination and stereotypes.  Such was the case with her 1930 Po' Buckra.  The literary magazine America in Fiction described the "story of the penniless heiress to an unproductive plantation who marries a 'po' buckra,' who, unknown to her, has both Negro and Indian blood."

In 1931 the Shelbys moved to Venice, Florida, where Edmund became a member of the consulting staff of the Florida Medical Center.  Gertrude died there of a heart attacked in November 1936; and Edmund died in Lexington at the age of 76 in 1943.

In the meantime, while other former mansions on the block were converted to apartments or rooming houses during the Great Depression years, No. 116 continued as a private home.  It was not until 1971 (after being declared an unsafe building the year before) that it was converted to a duplex apartment in the basement and parlor level, and one apartment on each of the upper floors. 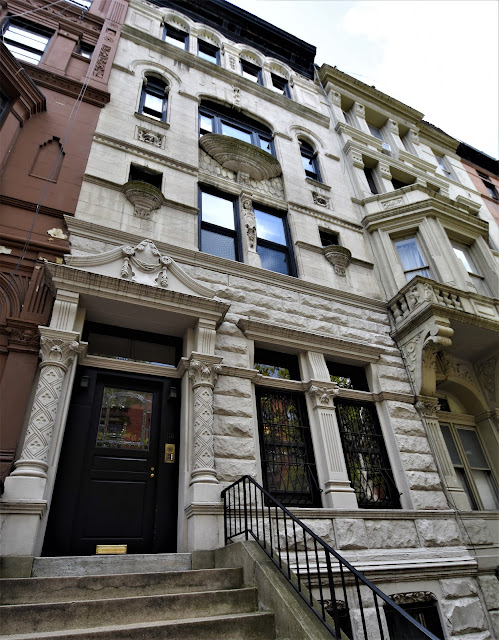 Sadly, all of the leaded and stained glass panels were lost when personality-free replacement windows were installed recently.  But on a happier note, the stoop, removed most likely in the 1971 renovation, has been recreated; rescuing Thom & Wilson's surprising doorway from floating in air.