On September 19, 1859 workers were busy constructing a modern loft building for dry goods merchants James Benkhard and Benjamin H. Hutton at Nos. 142-144 Duane Street.  The Tribeca neighborhood was just seeing real commercial development, and the rest of the block was still lined with houses dating to the 1810s, several already converted for business.

Disaster struck when a wall of the new building collapsed.  Four years later, on December 7, 1863 Benkhard and Hutton were in court answering a law suit charging them with "negligence or imprudence in the matter of their improvements" and alleging damages of $2,075.88.  They were found guilty.

Undaunted, Benkhard & Hutton forged on.  Their drygoods business was successful enough that they purchased the damaged properties and within months of the verdict had demolished them and begun construction on two impressive loft structures.  Completed in 1865, they were the last word in commercial architectural fashion.

The corner building at Nos. 150-152 Duane Street was nearly indistinguishable from No. 148.  Above cast iron storefronts, the five story structures were faced in sandstone and combined the Italianate style with the newly-emerging French Second Empire.  Each floor was defined by a stone cornice and featured segmentally-arched windows separated by dignified pilasters and corner quoins.

The side of the building, facing West Broadway, was as impressive as the front.  Here the buff-colored stone became the trim, contrasting with ruddy red brick.  The architect created a three-part design by flanking the central section with two slightly more ornate three-bay pavilions.  Stone quoins defined the three sections.

James Benkhard died on April 21, 1865, the same year the building was completed.  Hutton filled it with other dry goods firms, including Lindsay, Chittick & Co., dealers in imported fabrics and fancy goods.


One of Hutton's early tenants seems to have gone out of business early in 1870.  An advertisement in The New York Herald on April 24 offered "For Sale Cheap--A number of blue cloth window shades, walnut top counters, office desks, &c.; all in fine order."

William S. Mount opened his new business in the building on September 20, 1876.  A stark departure from the dry goods firms, he dealt in "Turkish Goods."  American relations with the Ottoman Empire had been shaky at best until a treaty was signed in 1862.  By now merchants like Mount were importing an array of exotic goods.  Listed in his opening announcement were "Turkish rugs, Persian Rugs, embroidered table covers, neck ties; embroidered chair covers jackets; embroidered cushion covers, slippers, and a variety of other articles."

The following decade would continue to see a more diverse list of tenants.  In 1882 S. Moorhouse & Co., importers and wholesalers of "staple and fancy" groceries, was in the building; and around 1884 Edwin C. Burt & Co., makers of ladies' and children's fine shoes moved in from No. 93 Thomas Street.   It was the first sign of the neighborhood's change from the dry goods to shoe district.

Burt had started his career in his father's leather shop in Hartford, Connecticut, but came to New York in 1848 with his brother, James, to sell shoes and boots to the Southern and Western markets.  The Civil War put an end to Southern trade; so he turned from selling to manufacturing high-quality shoes.

Edwin C. Burt died in 1884 at the age of 66.  His business continued, as did his legacy of bad labor relations.

In 1875, with the financial depression still ongoing, Burt had reduced the salary of his cutters from $24 per 10-hour week to $21 (about $475 a week in today's dollars).  The men walked out.  Rather than negotiate, Burt simply replaced them and told a reporter that "he had had no difficulty in obtaining all the men he required."


In a case of deja vu workers walked off the job in February 1889 when Edwin C. Burt & Co. reduced their wages by as much about 25 percent.  The New York Times reported on the stand-off on February 26, writing "The members of the firm said that competition compelled them to make reductions, but the men declare that Burt's shoes always fetch a higher figure in the market than any other shoes and that the firm's business is as good as ever."

In addition to its fine quality shoe, Edwin C. Burt & Co. was known for its clever trade cards which it distributed to its retailers.  The colorful, eye-catching cards warned customers to check for the firm's stamp inside the shoe to make sure they were the real thing. 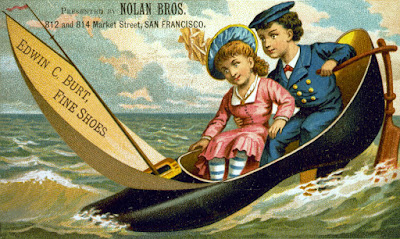 In the meantime, by 1892 the Whiting Paper had taken over essentially all of the upper portion of Nos. 150-152 Duane Street.  The ground floor was occupied by the United States Express Co.

Whiting Paper boasted being the second largest paper manufacturing firm in the world (the first being in Aberdeen, Scotland).   William Whiting had organized the firm in 1865, with its paper mill in Massachusetts.  It manufactured "all kind of find writing and envelope papers."

The firm also rented the top two floors of the building next door, at No. 148 Duane Street.  It shared that building with wine and liquor importers Julius Wile Brothers & Co.; perfume manufacturer Rice Brothers & Tiffany; and J. L. Alboez, "dealer in atomizers."  Along with Whiting Paper Co., the stock or materials used in manufacturing by all the tenants were highly flammable.

Both buildings were repaired and Whiting Paper took over all four upper floors of No. 148--now completely filling both buildings above the ground floor.  United States Express Company remained at street level in Nos. 150-152 and Jules Wile Brothers & Co. moved back into its store next door.

Disaster repeated itself on May 5, 1900 when fire broke out on the fifth floor of No. 148.  Before what firefighters described as "a stubborn blaze" was extinguished Whiting suffered about $5,000 in losses while the liquor store incurred $2,000 water damage.

In 1907 Whiting Paper added a warehouse on White Street in response to "the steadily increasing business."  With the bulk of its storage gone from Duane Street, space opened up here for other firms.   The first was the newly-formed D. J. Allen Co., wholesale boot and shoe dealers, which opened for business on December 1, 1907.


After decades of doing business at the corner of Duane and West Broadway, in June 1912 Whiting Paper Co. announced it had leased five floors in a building under construction at Seventh Avenue at 14th Street.  With the paper company's removal, Nos. 150-152 was taken over by shoe concerns.

In 1914 T. R. Emerson Shoe Co. moved in.  The firm maintained stockrooms in upper floors while operating its retail store at ground level.  Here "fashionable designs of women's footwear" could be seen.

M. B. Martine, Inc. took over the second floor in 1921 where, according to the Boot and Shoe Recorder, "they have more commodious quarters for their office, sample room and factory."  The company manufactured shoe accessories including "over-gaiters, buckles, and other shoe ornaments."

The building continued to house shoe firms throughout most of the 20th century.  In 1942 it was home to the M. J. Saks Shoe Company. 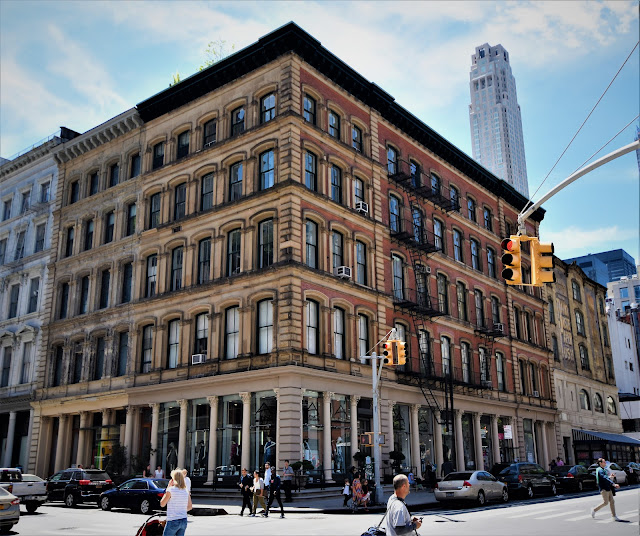 As was the case with many Tribeca loft buildings, Nos. 150-152 was renovated to for residential use above the ground floor in 1990.  Throughout its more than 150 year life, the impressive structure has been little changed externally.  A modern renovation of the storefronts resulted in vast expanses of plate glass; yet the surviving cast iron elements present a clear indication of the original appearance.