A Gift from France - the Layfayette Statue in Union Square 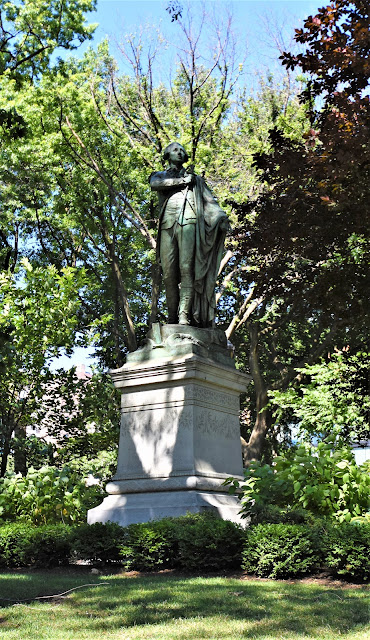 The relationship between the United States and France was close since America's infancy.  French statesman and military commander Marquis de Lafayette traveled to the colonies to help train the revolutionary army, prompting General George Washington to appoint him Major General in 1777.

Lafayette was back in 1780, joining in battle to help defeat Lord Charles Cornwallis in 1781.  His relationship with Washington went beyond military comrades and they became close friends who shared mutual respect.

When Lafayette returned to the United States as a member of the French Chamber of Deputies in 1824, Congress showed its esteem and appreciation by presenting him with a large estate and $200,000.

France became embroiled in the Franco-Prussian War in 1870-71.  The United States was still recovering from the Civil War and was unable to provide military aid to its ally.  New York City did respond with aid for Paris, however, at the time of that city's greatest need.

In response, the Cercle Francais de I'Harmonie, or French Fellowship Society, offered a gift to New York City in 1873: a bronze statue of Marquis de Lafayette.  Sculptor Fredric-Auguste Bartholdi was selected to execute the figure.  His name would become much more an American household word a decade later when he created a second French gift, the Statue of Liberty.

The statue arrived in New York on July 14, 1875, Bastille Day.  Dedication would not take place for another year--partly because (like the Statue of Liberty) the gift came without a base.  French-born New Yorkers poured in their donations to fund the granite pedestal, designed by H. W. DeStuckle.

The statue was originally intended for Central Park; but the location was changed to Union Square.  Reportedly French-born citizens complained that the Park Commissioners were taking too long to pick a location.   The dedication took place on Lafayette's 119th birthday, September 6, 1876.  And it was no small affair,

A massive parade of military units, fire department engines, French societies, bands and dignitaries marched from Fifth Avenue and 25th Street to 4th Street, then to Broadway and back up to Union Square.   The platform near the American flag-draped statue was decorated with the French tricolor and the stars and stripes.  Thousands of New Yorkers crammed the Square and the streets.


The following day The New York Times reported "Yesterday saw something of the amenities of two great republics.  In the presence of an applauding multitude, the Lafayette statue in Union square was unveiled and presented, on behalf of the French Republic, to the commercial capital of a land bound to its old friend by the close kinship of sympathy and principle."

After several speeches the statue was formally presented to the city by French consul-general Edmond Breuil, and unveiled by Bartholdi himself.  The symbolism of the monument's location, facing the equestrian statue of George Washington, did not go unrecognized.  Speaker Frederic R. Coudert said in part:

If we could say to Lafayette, "Where do you wish your image to rest for ages, in order that our descendants may look upon it and love you?" would he not have chosen just the spot we have, and have said: "I wish to be near the man who called me son, and whom I loved as a father"?

The granite base was inscribed "In Remembrance Of Sympathy In Time Of Trial."  The editor of The New York Times pointed out that those shared trials reached further back than the recent war.  "The legend refers to 1870-1, but...the tale is something like a century old, and trials have grown into triumphs since then, but the past has kindly, prompting ghosts that will not let the present become forgotten to its obligations."

Bartholdi modeled his larger-than-life bronze figure in the act of taking a step forward.  Scribner's Monthly described it as if the sculptor had known that it would be facing the Washington statue.  "Hence he has made him in the act of taking a step in the direction of the great general and sweeping toward him with his left hand a mute offer of his service.  His right presses a sword to his breast with a gesture of devotion and as if making a vow."

Lafayette stood on the bow of a ship, with waves breaking on either side.  The critic of Scribner's Monthly explained that it "commemorates his adventurous trip over the Atlantic."


The statue was the focal point of annual celebrations of Memorial Day and what was known as Lafayette Day, September 6, Lafayette's birthday.   On those occasions the monument would be decorated with bunting and flowers.  On May 30, 1900, for instance, the New-York Tribune reported on the Memorial Day ceremonies:

"A laurel wreath tied with violet ribbon, which will hold in place a huge bunch of violets, will be placed to-day by the Daughters of Lafayette Post on the Union Square statue of the hero whose name the organization bears.  The post makes the decoration of the statue its especial care."

September 6 took on even more meaning when the Battle of the Marne was fought on that day in 1914.  The four-day skirmish resulted in the Allies turning back the German advance on Paris.   Afterward, the Lafayette statue was the center of what was now called Lafayette-Marne Day.


The ceremonies were especially upbeat in 1918, with victory achieved.  The Sun reported on September 6 that year "New York will celebrate Lafayette-Marne day to-day.  The fraternal bonds joining the United States and France which have been strengthened by the war will be more finely tempered by the exercises arranged for this, the 161st anniversary of the birth of Lafayette and the fourth anniversary of the battle of the Marne."

The article noted "French and American bluejackets and a detachment of soldiers from Governors Island will give the meeting a military touch.  The Sons of the Revolution will accompany the color guard of that organization, carrying the flags of the days and battles in which the great French patriot participated when this country was fighting for her freedom."


A year earlier Robert Shackelton had published his The Book of New York, which guided tourists through the metropolis.   His description of the Lafayette statue foreshadowed what was to come.  He wrote that Lafayette bent forward towards Washington "as if to hasten to the great leader whom he so worshiped; as if, indeed, actually in the act of motion toward his chief."

But then, with amazing prescience, he added "At least it is so as I write, though in this city of change, Lafayette may be made to face in some other direction, or Washington may be moved away, if it happens to be some commissioners' whim or if it should be demanded by some matter of subway construction, in this burrow of Manhattan."

The celebration of Lafayette-Marne Day continued at least through the 1920s.  But in 1928, just as Schackelton had predicted, the entire park was excavated to create the subway concourse below ground.  The statues in and around the park were removed and stored to await the reborn square.

On May 4, 1930 landscape architect J. V. Burgevin, working with the Parks Commission, unveiled the new layout.  The Lincoln and Washington statues, which had sat on traffic islands on either side of the south end, would now be aligned in a straight line--Washington anchoring the center south end of the park, and Lincoln at the far north.  On the western perimeter the James Fountain would be juxtaposed with the Lafayette statue, which would now face east.

The result was that Lafayette's outstretched hand, once appearing to offer aid and friendship to General Washington, now appeared to be asking for a loan from the Union Square Savings Bank.

By the 1970s Union Square and its immediate neighborhood had greatly deteriorated.  The Square was the haunt of drug dealers and addicts, the lawns and shrubbery were overgrown, and its monuments were neglected. 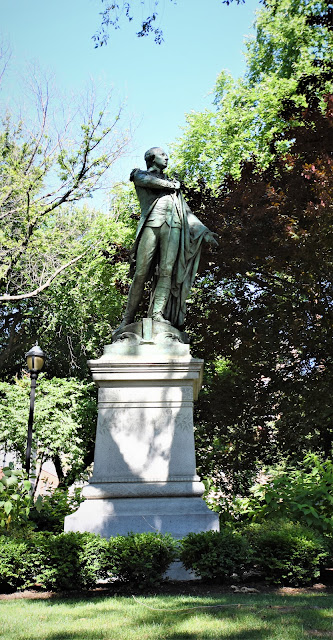 Finally an $8 million restoration and revamping of the park was initiated in the early 1980s.  In 1991 the Lafayette monument was conserved by the Adopt-A-Monument Program, a joint effort of the New York City Art Commission and the Municipal Art Society.