In March 1888 architect Edward L. Angell filed plans for five four-story "brick, brown stone trimmed" dwellings on West 74th Street, between Columbus and Amsterdam Avenues.   Mary J. Coar, who hired Angell, was apparently a take-charge woman.   Not merely the developer of the project, she was listed as the contractor as well.

Angell designed the upscale homes in the popular Queen Anne style.  He strayed from the strictly A-B-A-B-A configuration (the parlor windows alternating between large, arched openings and paired smaller openings) by gracing the end houses with projecting second story bays.  The basement and parlor levels were clad in rough-cut brownstone, while the upper floors were faced in red brick.


Dog-legged stoops rose to prominent medieval-inspired porticoes.  Angled bays, a profusion of stained glass, carved decorations (individual to each home), and triangular pediments above the roof line reflected the asymmetry and whimsy of Queen Anne.


No. 144 became available when the original owner had defaulted on the mortgage, resulting in a foreclosure auction.  It was purchased in 1891 by Morris Reno and his wife, Sarah Marie, who went by her middle name.  Reno's story was worth of a Horatio Alger book.

Born Moritz Rindskopf, he arrived in New York in 1861 and started business selling canned goods.   By now he was a successful real estate broker.  More importantly, the couple's love of classical music resulted in his becoming a director of the New York Ontario and Symphony Societies, and a partner with Leopold Damrosch in producing German operas in the Metropolitan Opera House.


Buying the 74th Street house was certainly not the most impactful event in the Renos' lives in 1891.  Morris had been highly instrumental in the organization and building of the new Carnegie Hall.  He became the president of Hall's management company.  When world-renowned conductor and composer Peter Ilyich Tchaikovsky arrived in New York to open Carnegie Hall, Reno and his 20-year old daughter, Alice, were there to meet him.

Morris Reno gave the welcoming speech on March 5, 1891 from the Carnegie Hall stage, and introduced Tchaikovsky.  The composer was treated as a celebrity while in New York, and was the guest of honor at a dinner hosted by Morris and Marie Reno.

On the evening of April 15, 1895 Paula Made Reno was married in the 74th Street house to Louis Hicks.  It is not surprising that along with her sister Alice, Clara Damrosch served as a bridesmaid.  The New-York Tribune noted that "a large reception" followed the ceremony.

In 1902 Renos sold the house to Adolf J. Grinberg.  He and his wife, Lina, lived here until 1916, when their contented domestic life seems to have become a bit rocky.

Dr. Maria Montessori was visiting New York from Rome that year.  She was the founder of what was known as the Montessori Movement, an innovative approach to child education.   A committee composed of what The New York Times called "well-known persons" was formed with Mrs. Alfred L. Loomis as president.  The group leased No. 144 from the Grinbergs and established Manhattan's first Montessori school here.

The school operated from the house for only a few years.  In 1921 Adolf Grinberg transferred it "on demand" to Lina, who was living in the Hotel Belnard.   The house that once echoed classical music would soon be filled with jazz.

In Depression Era Manhattan speakeasies cropped up with dizzying regularity.  No. 144 was converted to "The News Writers' Club," ostensibly a private social group.  Inside, however, there were no leather club chairs and book-lined walls.   Closed down once, it was reopened in 1932 by Lawrence "Salty" Ganze, a 31-year old taxi driver; 19-year old Florence Thompson; and 32-year old Herman Nerenberg, alias Newberg.  Unlike most speakeasies, which operated merely to provide alcohol and a nightclub setting; theirs was what was known as a "clip joint" where unsuspecting patrons were robbed.

Salty Ganze would later confess to having owned 10 other speakeasies at different times.  As a cab driver, it was easy for him to lure out-of-towners looking for a good time to the speakeasy.  Once inside Florence, described by the New-York Tribune as "the blonde hostess," would entice the men and get them drunk.

The trio could be fairly confident that their targets would not report them to the police.  Being in a speakeasy in itself was a crime.  But on the night of October 31, 1932, things went terribly wrong.

Ganze picked up two diamond dealers, Achille Mirner, who was in town from Paris, and Jerome Bernheim whose shop was in the Mayflower Hotel.   After drinking for around two hours, the men were presented with a tab for $157--an outrageous $2,760 by today's standards.  Then Frances separated them by inviting Bernheim to her apartment.

The two took a cab for a few blocks, then Frances told Bernheim, "You're a good fellow, so I'll pay the bill."  When he exited the taxi, she rode away leaving him bewildered.

When she arrived back at The News Writers' Club, she found her cohorts standing over a bloody and beaten Mirner.  They fled with around $1,600 in cash, leaving Mirner on the floor.

Several hours later the jeweler stumbled into The Saint Andrew Hotel, mumbling to the desk clerk, "I was taken for a ride."  He died two days later; his autopsy declaring the probable cause of his death to be "a kick in the stomach."

Mirner did not die before providing detailed descriptions of his attackers.  All three were arrested on November 2.  Frances pleaded her innocence, saying she was not even there, having left with Bernheim.  Ganz and Nerenberg said they were not involved.  The Associated Press reported they insisted that Mirner "was beaten in a free-for-all fight and they did not know the identity of his assailant."

Ironically, as it turned out, the quick arrests most likely saved Florence's life.  When detectives nabbed one of her cohorts, he was on the phone with the other.  They overheard him say "Dead men tell no tales.  We have the blonde with us.  She saw it all.  We have to get rid of her, too."

The jury was selected on April 13, 1933 and New Yorkers watched the newspapers for details of their trials.  The gruesome details were laid out in the courtroom while journalists supplied the public with
photos of the teen-aged temptress dressed in furs.  Faced with first degree murder charges, Ganze and Nerenberg pleaded guilty to manslaughter on April 27.  The court ordered the jury to acquit Florence.

Sentencing came on May 11.  Ganze and Nerenberg received terms of 5 to 15 years in Sing Sing.  The New York Times reported "Judge Freschi told Nerenberg and Ganze they had 'engaged in a pretty low-down business in running a clip joint,' and continued: 'This case should serve as a lesson to men who are inclined to visit such places.'"


Like the rest of the row, No. 144 was soon converted to a rooming house.   In 1971 it was combined internally with Nos. 140 and 142 and renovated as apartments.  The western-most house, No. 148, was demolished in 1963 to make was for a modern apartment building.  Only No. 146 retains its stoop and original entrance. 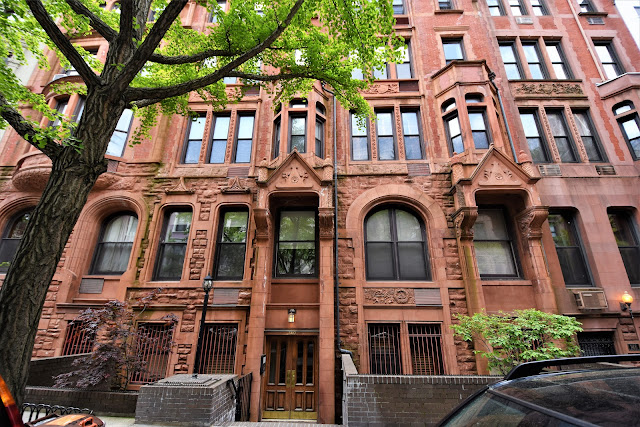 None of the stained glass survives in any of the houses--once so important to their architectural personalities--and they have suffered significant abuse.  Nevertheless, the integrity of Edward Angell's 1888 design endures.  And the remarkable history that played out within No. 144 West 74th Street is nearly unbelievable.