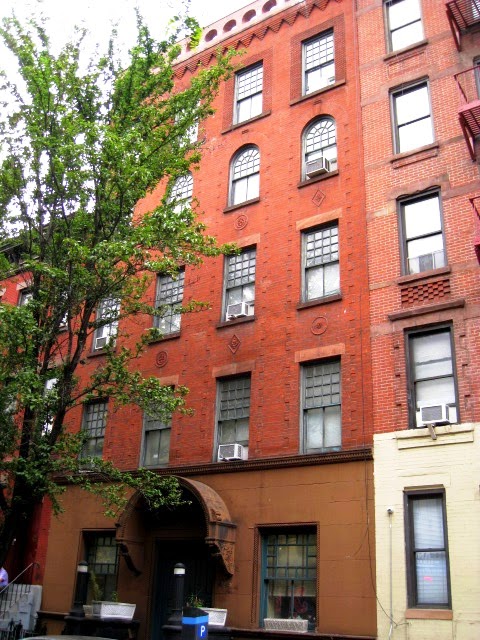 In 1885 the block of West 47th Street between Eighth and Ninth Avenues was not an especially nice place to live.  Part of the notorious Hell’s Kitchen neighborhood, it was home not only to hard-working immigrant laborers; but to gangs and cutthroats like the Tenth Avenue Gang and the Hell’s Kitchen Gang that had terrorized the area for decades.

Four years earlier The New York Times had described Hell’s Kitchen saying “the entire locality is probably the lowest and filthiest in the City, a locality where law and order are openly defied, where might makes right, and depravity revels riotously in squalor and reeking filth.  The whole neighborhood is an eyesore to the respectable people who live or are compelled to do business in the vicinity, a source of terror to the honest poor, and an unmitigated nuisance to the police of the Twentieth Precinct, whose record-books are filled to overflowing with he names of the residence of these tenement houses.”

In 1882 James D. McCabe wrote about those tenements in his New York by Gas-Light, explaining “The city contains two classes of tenement houses.  Those of the first class are occupied by well-to-do working people; those of the second by the very poor.  The first are large, neat-looking structures, and are kept as clean as the great number of people occupying them will permit; the second are wretched abodes of misery, and often of vice and crime.”

In October 1884 contractor James C. Miller was getting his feet wet as a developer and the Real Estate Record & Builders’ Guide noted his address as No. 359 West 47th Street.  Within two years he would be involved in adding what could be argued as a third class of tenements to McCabe's list.

But before he demolished his building on West 47th Street, Miller commissioned the architectural firm of McKim, Mead & White to design what American Architect & Architecture called on August 8, 1885, "a three-story brick dwelling costing $10,000 on West 119th Street."  He would hire the seven-year old firm again a year later.

Miller’s property at No. 359 West 47th Street was razed and in its place McKim, Mead & White designed a modern apartment building, slightly upscale from the working class tenements that surrounded it.  When the plans were filed in April of 1886, The City Record was not impressed enough to term Plan 4008 anything other than “for one tenement house.”

Completed in 1887, the Wanaque stood out from its neighbors.  The somewhat austere brownstone base featured an admirable stone hood over the doorway.  Squiggly balustrades of the fencing protecting the deep basement moat drew from the popular Queen Anne style, as did the multi-paned windows and unaggressive terra cotta medallions.  Above it all was a brick-corbelled cornice.

Miller’s middle-class apartment house stood in defiance to the gritty neighborhood.  There were just two rather spacious apartments per floor separated by the entrance hall.  Although each boasted three bedrooms, a dining room, parlor, bathroom and kitchen; they were designed in the awkward but space-saving “railroad flat” layout.  In order to move from the parlor in the front to the kitchen or bathroom in the rear, one had to pass through the bedrooms.  Should a family member be sleeping, the trip could be made down the public hallway.

Respectable families moved in.  The Benjamin family was among the first tenants.  Daughter May Belle Benjamin was a teacher in the primary department of Grammar School No. 40 at No. 225 East 23rd Street.  Also living here in the mid-1890s was Joseph M. McMillan, a member of the New York County Medical Association, and W. L. Bingham who was Sunday School Superintendent at Bloomingdale Church, on Broadway and West 68th Street.

May Belle Benjamin’s sister, Libbie, was 25 years old on August 1, 1897 when she stepped into the street late at night at 124th Street and Mount Morris Avenue.  A bicyclist struck her, fracturing her right leg.  The unknown rider sped off and Libbie was taken to the Harlem Hospital.

Policeman William Peabody was living here and making a name for himself at the turn of the century.  He joined the force on January 9, 1900 and rose to Detective Sergeant on July 11, 1901.  Now, in 1905, he arrested Dr. John A. Harris, a broker, at his high-class residence at No. 112 Riverside Drive on charges of extortion.  By 1907 he would rise to the rank of Lieutenant.

In the meantime, William Southard had telephone service installed in his apartment.  The problem for Southard was that he had to pay for it.  Evidence submitted in court on December 1, 1906 revealed that Southard’s total amount of “subscription phone” was $30.00.  He had managed to pay to date $18.00.  The judge gave him until November 28, 1907 to pay the balance—amounting to about $300 today.

Around this time millionaire Howard Gould and his wife, the former Katherine Clemens, began having marital problems.  On March 23, 1907 Detective Sergeant Peabody traveled to Baltimore “in an investigation of the so-called Gould case,” according to The New York Times.  It would not end happily for Peabody.

In June he found himself standing trial for “giving false testimony before the trial Commissioner on May 20, and with being absent from the Detective Bureau and disobeying orders two days later.”  Peabody insisted he had been sent to Baltimore by former Inspector McLaughlin.  The Deputy Police Commissioner said he had traveled without authorization.

On June 25, 1907 Commissioner Bingham dismissed William Peabody from the force and issued a scathing statement which read in part “It is to be noted that only after Peabody’s false statement was proved from outside sources did he finally admit his guilt.  This shows him a stubborn and insubordinate liar…I have personally talked with and studied Peabody, and have no hesitation in saying that he is utterly untrustworthy, and does not hesitate to lie.”

William F. Peabody did not take his removal from the police force lying down.  On May 3, 1908 the New-York Tribune reported that he “began a suit for $50,000 damages against Commissioner Bingham yesterday…Commissioner Bingham is charged with having brought Peabody into public scandal, infamy and disgrace by delivering or causing statements to be circulated that he was more loyal to outside influence than to the Police Department.”

Although Peabody’s position with the force was restored and he continued to rise in the ranks; he would get himself into hot water again.  A headline in The Evening World on October 16, 1914 read “Police Captain Peabody Up Again On Charges.”  When Commissioner Woods visited the police station on the afternoon of October 3, he discovered that Peabody was falsifying his sign-in time on the blotter.  The newspaper said he “has been brought up on charges again, this time of conduct unbecoming an officer neglect of duty and violation of the rules.”

That same year the Hatch family was living in the Wanaque.  On September 12 little 6-year old Frederick was playing in the street in front of the building when he was struck by the “pleasure car driven by Mrs. Margaret B. Chapman,” according to The New York Times the following day.  The newspaper said she lived at the Hotel Astor.  “Mrs. Chapman lifted the boy into her car and took him to the Polyclinic Hospital.  He was not seriously injured.”

In 1915 investors C. F. Pool, G. F. Anderson, and F. Gerbi gave the Wanaque as the address of their newly-incorporated Typhoon Ventilators Company.  The men were going into business manufacturing “heating, cooling and ventilating apparatus,” according to Steel and Iron on April 1.

The neighborhood around the Wanaque remained rough.  In 1939 the Works Progress Administration’s New York City Guide described the varied ethnic population—Irish, Italians, African Americans and, the newest group, Puerto Ricans.  By mid-century racially-based gangs staked out territories and fought one another; a tense situation made famous by Leonard Bernstein’s play West Side Story.

Conditions were such that in October 1957 when the Butnick Hotel Corporation leased the building, it was referred to as “The Wanaque Hotel.”  Little had improved by the 1980s.  On September 16,1984 The New York Times reported “Two men were shot to death in a midtown Manhattan hotel early yesterday, apparently in a dispute over money, the police said.”

At 3:25 in the morning shots rang out in the hallway of the Wanaque Hotel.  Police arrived to find George Gandia, 28 years old, and 30-year old George Morena dead.

Five years after the shooting, in 1989, the building was converted by architects Farrell, Bell & Lennard into Fountain House, a not-for-profit residence for psychiatric patients.  (Coincidentally, the firm was the latest incarnation of the building’s original designers, McKim, Mead & White.) 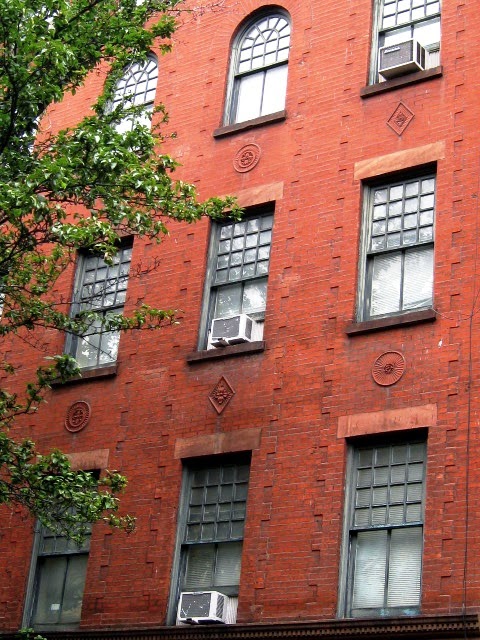 McKim, Mead & White’s Wanaque Apartments stands out today as it did in 1897—a little known, relatively early work by the firm which would soon top the list of architects nationwide.