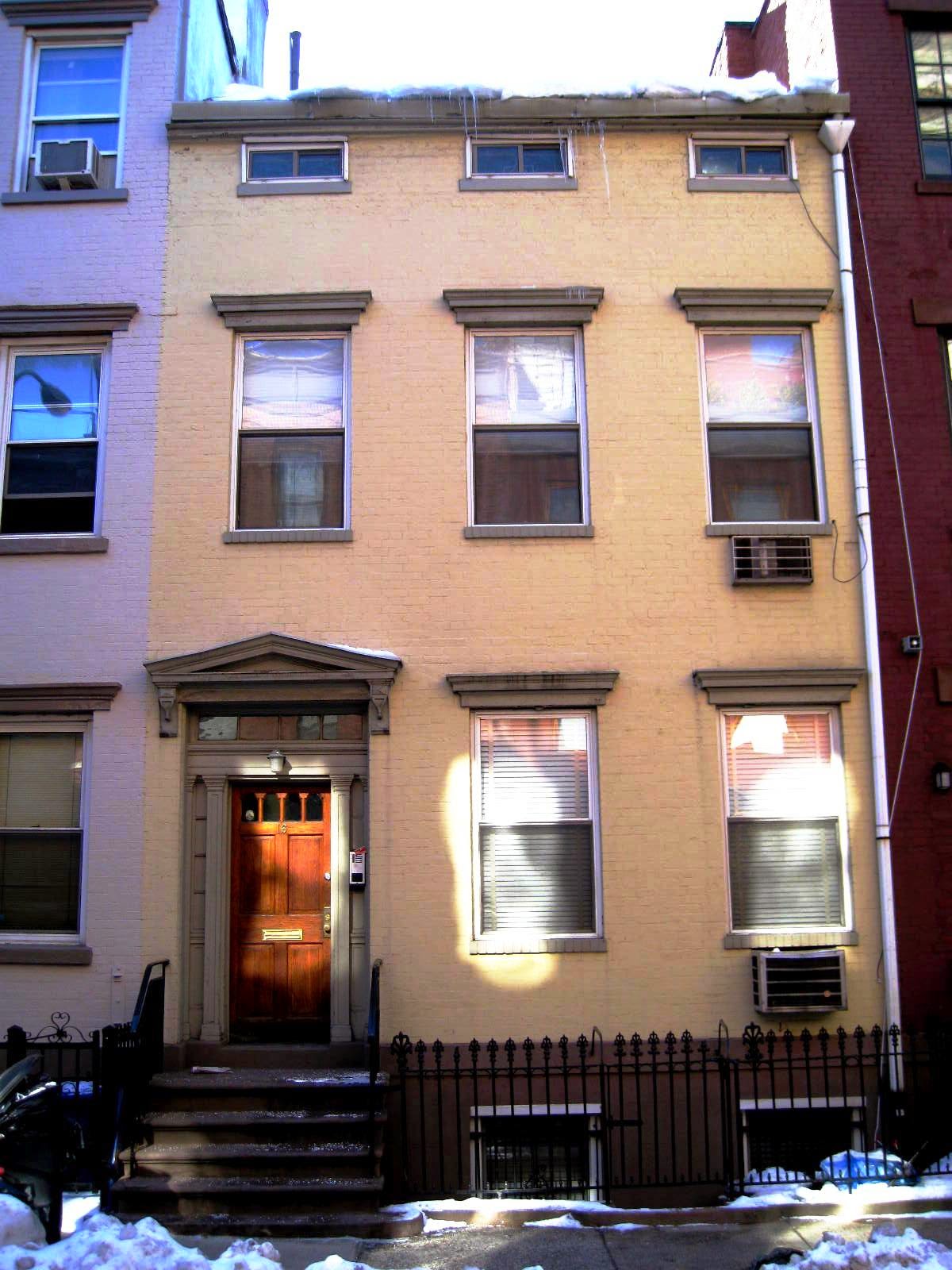 In the 1820s and '30s, nearly three quarters of a century before quiet Leroy Street in Greenwich Village would see the invasion of tenement buildings, quaint brick-faced homes were being built here.  No. 16 was among them—one of a string of identical, speculative Greek Revival houses built for the working middle class.


Like its neighbors, the two-story house sat above a shallow stone-clad English basement.  A simple iron fence ran the length of the row, decorated with anthemions.  The houses reflected the newly-popular Greek Revival style, foregoing the dormered attics in favor of flat roofs.  Small attic windows were punched into the wide wooden faschia boards.


No. 16’s doorway would be a clone of the others—a paneled door framed by pilasters and sidelights.  A copious overlight allowed sunlight to illuminate the entrance hall.


Completed around 1830, it would become home to respectable, working class families.  Amy E. Hallock lived here in the 1850s.  She earned a salary of $200 per year as a teacher in Primary School No. 8 nearby at No. 61 Thompson Street.  Amy’s yearly income would amount to about $5,200 today.


The Hallock family lived here at least through 1858; but in 1860 the house was home to Derrick L. Coles, his wife Ann, and their year-old baby Mary Ellis.  Later that year when Coles’s 64-year old mother, Maria, died on Tuesday, December 18; he had her body brought to the Leroy Street house for the funeral held two days later.


Another heart-wrenching funeral would take place in the parlor four months later.  Little Mary Ellis died on Monday April 15, 1861.  The following day friends and relatives assembled in the Leroy Street house for the noon ceremony.


At the time of Mary Ellis’s funeral the family of policeman Harman Lefferts was living nearby at No. 41 Commerce Street.  Lefferts worked for the City, earning $547.50 a year (about $15,000 today) as a “night inspector.”


By 1866 Harman, his wife Gertrude, and their adult son had moved into No. 16 Leroy Street.  G. W. Lefferts listed his occupation as “clerk” that year.  He was also a firefighter with the Amity Hose Company No. 38.


In March 1870 Gertrude became ill.  Her condition quickly worsened and she never recovered.  She died on Friday, April 1.  Once again the doorway was draped in black as mourners filed into the house on Sunday, April 3 at 1:00 for Gertrude’s funeral.


By now Harman had been promoted from “night inspector” to patrolman.  In 1880 he was promoted again to detective.  The New York Times said he “had often distinguished himself by his bravery, and whose capacity for judging of character was known.”  His “capacity for judging character” would be tested in January 1881.


William H. Randolph, alias Perry Wright, was a polished con-man whose father was a clock and watch repairer.  He had, therefore, gained a more-than-average knowledge of the workings of timepieces.  Randolph concocted a scheme by which he would loiter around high-end stores selling clocks and watches; make note of the purchaser of a timepiece; and manage to get one or two of the business cards from employees of the store.


After a few days, Randolph would visit the home of the purchaser, present the business card, and explain that the retailer wanted to make sure that the watch or clock was operating perfectly.  “He said the firm never permitted a defective article to leave them, and that he was sent to take the watch or clock back if there was anything the matter with it,” reported The New York Times on January 29, 1881.


Not unexpectedly, Randolph always found something wrong.  He then explained to the purchaser that he could take the timepiece back to be regulated, or it could be exchanged for another.  “In almost every instance the swindler, besides carrying away the clock or watch, took also the thanks of the purchaser to the tradesman for his honest dealings and the pains he took to make his customers satisfied,” said the newspaper.  Randolph would leave with the expensive clock or watch and the swindled buyer would not be suspicious for several days.


Harman Lefferts was given a description of the crook and the task of finding him.  The rookie detective checked shops for newly-pawned clocks and watches and matched the description with a 43-year old man who often lodged at the Rapid Transit Hotel on the Bowery.  Within 24 hours of receiving his assignment, Lefferts nabbed Randolph by staking out the hotel and grabbing him when he entered.  The New York Times praised Lefferts, saying he had “far successes in his task.”


Lefferts and his son were still living at No. 16 Leroy Street in 1885.  And G. W. Lefferts was still a member of the Amity Hose Company—now part of the organized and professional New York City Fire Department.


But as the turn of the century approached Leroy Street had changed.  Many of the residences had been converted to rooming houses and so it was with No. 16.  On March 11, 1895 an advertisement in The Evening World offered “Large & small front rooms, with board; American family” in the house.


Not long before this the owners made a half-hearted attempt to update the residence.  A neo-classical pediment was installed over the doorway.  At some point the Greek Revival fascia board was removed.
Among the boarders was the family of Robert T. Knipe.  He was Chairman of Trustees of the Seventh Avenue United Presbyterian Church at Nos. 27-35 Seventh Avenue.  Daughter Mary was a teacher in the Primary Department of Grammar School No. 42 at No. 30 Allen Street.  The Knipes would stay on in the house for several years.


Throughout the 20th century No. 16 Leroy Street saw little change.  It made the transition from rooming house to apartment house and other than an ill-advised coat of paint and two air conditioning units poking through the brick façade; looks much as it did when the Mary Knipe left every day in 1898 to teach school. 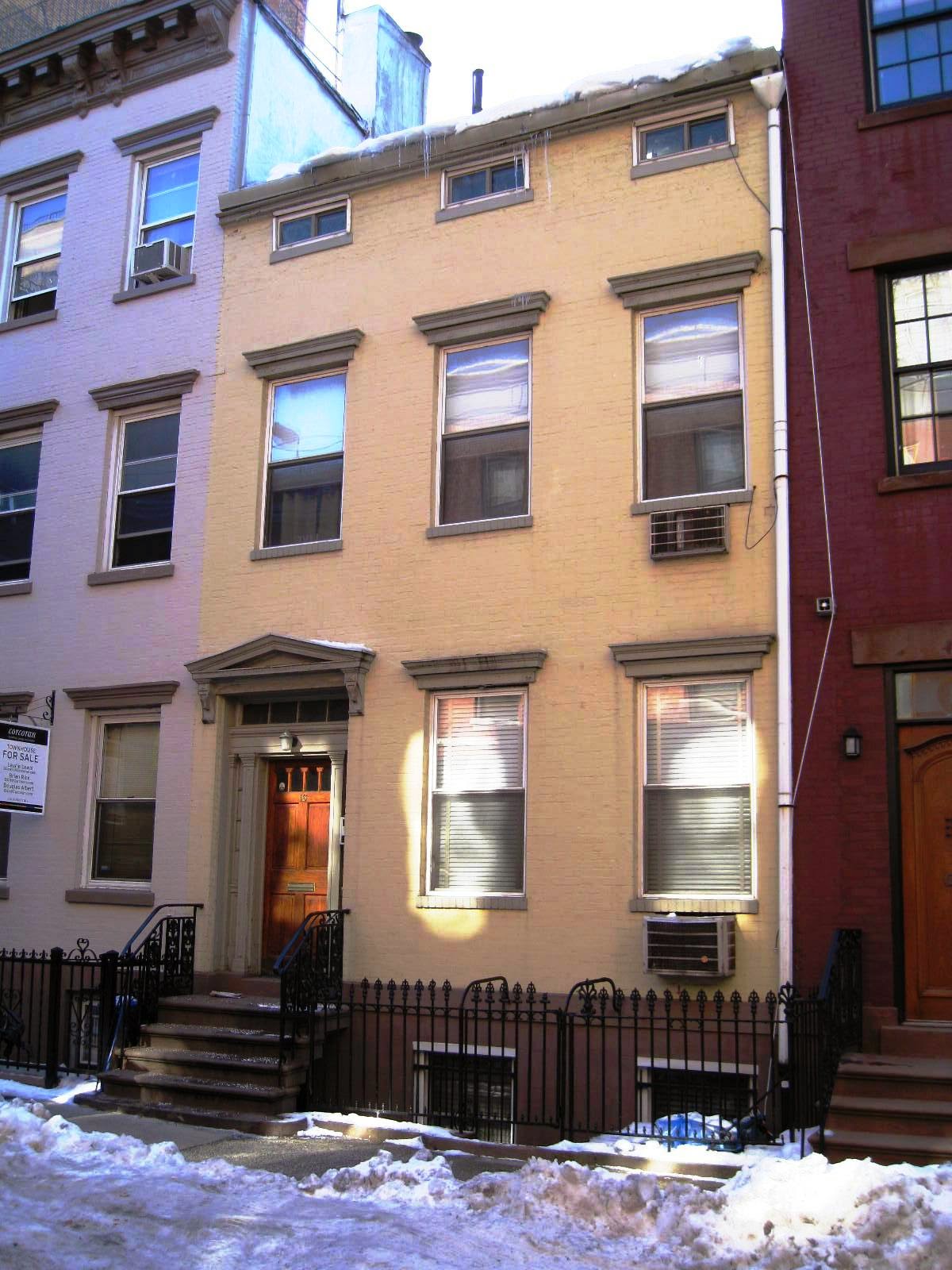 photos by the author
Posted by Tom Miller at 3:20 AM