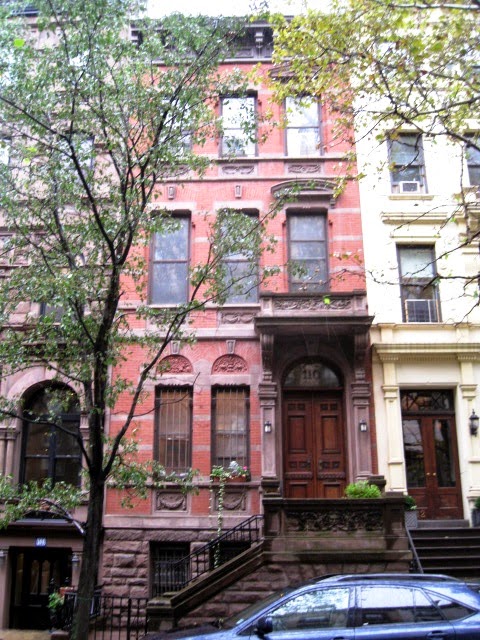 Architect Alfred Zucker’s partnership with John Hinchman was only a year old in 1885 when the firm was approached by Henry Maibrunn to design his Upper West Side townhouse.  In announcing that the firm was drawing up the plans on January 24 that year, The American Architect and Building News got the name slightly wrong, calling the firm “A. Tucker & Co.”

Architects working on the rapidly developing Upper West Side enjoyed, for the most part, a freer hand than those designing homes on the east side of Central Park.  Houses sprouted turrets, gargoyles and towers in a multitude of materials.  The straightforward stoops of the East Side here took a turn of two before hitting the sidewalk and historical purity was often discarded for the sheer joy of design.

For Maibrunn Alfred Zucker & Co. produced a striking three story residence of red brick over a rough-cut brownstone basement, completed in 1886.  The architects melded the highly popular Queen Anne style with Renaissance Revival.  The formality of the brownstone pediments above the stair hall windows and the sober festoon-decorated panels below the openings was relieved by airy Queen Anne elements.  Brownstone bandcourses, carved keystones that floated above the lintels, and exuberant carvings joined with the hefty dogleg stoop to eliminate any stodginess.

Maibrunn was born in Bavaria in 1833 and had come to New York as a boy.  His wholesale butcher shop in Greenwich Village had earned him a comfortable fortune.  His philanthropic interests connected him with Mount Sinai Hospital, the Montifiore Home, and the Hebrew Sheltering Guardian Society.

Henry Maibrunn, his wife, four sons and three daughters were still living in the West 78th Street house when he commissioned A. Zucker & Co. in October 1887 to extend the show window in his building at No. 72 Greenwich Avenue.  But he would not stay on much longer.

At the time Louis Kemp-Prossor operated a high-end private school for boys at No. 315 Madison Avenue.  But in 1891 he rented the Maibrunn house.  He and his wife Edith moved in and on September 23 that year he announced in the New-York Tribune that “L. Kemp-Prossor’s School for Boys” would reopen on October 1, 1891 at 110 West 79th Street.

Tragically, only seven months after the school opened, on May 3, 1892, Edith died.  Her funeral was held in the house three days later at 2:30.

By the turn of the century the West 78th Street neighborhood was home to several physicians.  One of them was Dr. Louis Heitzmann.  On October 5, 1901 the International Record of Medicine and General Practice Clinics reported that he had moved into No. 110 West 78th Street.

Heitzmann had large shoes to fill.  His father, Dr. Charles Heitzmann who had died in 1896, was known internationally for his atlas of anatomy, his book A Microscopic Morphology, and his microscopic "laboratory," or school.  More than 1,000 physicians and students had attended his laboratory.

Louis Heitzmann operated his medical office from the home.  He also served as treasurer of the German Medical Society of New-York.  By 1909 he would be Professor of Pathology at New York Medical College.

It appears that in 1902 the Heitzmanns shared the house.  On February 2, that year the New-York Tribune reported that Mrs. H. A. Maurer had hosted a meeting of the Auxiliary of the Riverside Day Nursery.  Before the end of the meeting, when Mrs. Maurer served refreshments, the members heard a reading of Mrs. Dore Lyon’s paper “Woman’s Influence in Home, Club and Philanthropic Work," after which she read a poem “on the nursery, which embodied a touching plea for the children who are helped by it.”

In addition, “Mrs. Thomas sang a group of French songs, Miss Marguerite Curley gave several recitations and Miss Harriett Yam spoke briefly on philanthropy.”  It would seem to have been a long meeting.

Dr. Heitzmann followed in his father’s field of microscopy.  In January 1915 Heitzmann’s book Urinary Analysis and Diagnosis by Microscopical and Chemical Examination was published.  The same month the Medical Record noted “Dr. Louis Heitzmann gives instruction in microscopy, at his laboratory, mornings and afternoons.  Courses are given in urinary analysis, bacteriology, haematology, histology and pathology.”  His laboratory-school was in the West 78th house (which was valued that year at $43,000—about $970,000 today).  For a six-week course of six lessons every week, students paid $25.00.

One student turned out to be less interested in medicine than in murder.  Dr. Arthur W. Waite came to the 78th Street laboratory and, according to Dr. Heitzmann, “said he was a young physician of wealth, not under the necessity of practicing, and that he wanted to make a special study of poisons.”

Indeed, Waite learned the science of poisons; and it led to the untimely end of Grand Rapids millionaire John E. Peck, Waite’s father-in-law.  When Peck’s death was deemed suspicious, an autopsy was performed.  “In Mr. Peck’s stomach, said Dr. Vaughan, he found minute white specks, which he recognized as evidence of arsenic poisoning," reported a newspaper.

Dr. Heitzmann was called as a witness for the prosecution.  On March 24, 1916 The Evening World ran a sensational headline: WAITE CONFESSES; GAVE POISON THAT KILLED MILLLIONAIRE PECK.” 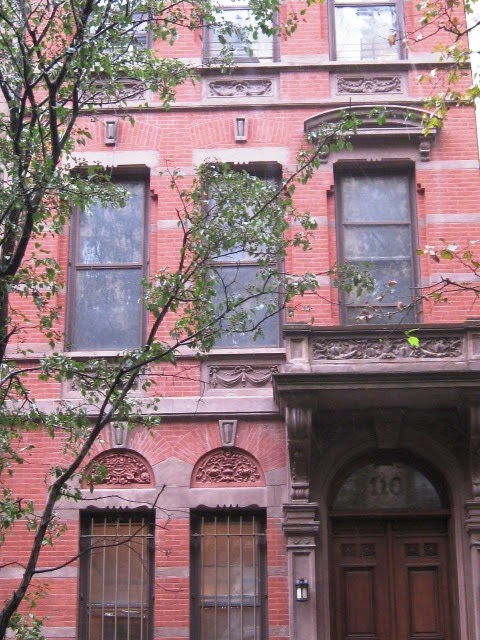 Two years after the scandalous trial, the Heitzmanns moved.  On March 29, 1918 The Sun reported that the Maibrunn Estate had rented the house “for a term of years to Nan Wester.”  The newspaper seems to have gotten the name wrong, for it was Fanny Avery Welcher and her husband Rev. Manfred P. Welcher who moved in.

Tragically, only four months later Fannie died at their Hartford, Connecticut home.  Manfred P. Welcher was still here in 1922.  He was a surprisingly early anti-cigarette activist; the field secretary of the Anti-Cigarette League of America.  On March 9, 1922 The Christian Advocate noted that he had “received permission from a representative of the Board of Education to speak in the high schools, the junior high schools, the teacher training schools, and even the continuation schools of New York City, on the injury caused by the use of cigarettes and other forms of tobacco.”

The magazine said “As he has seventy-five admirable lantern slides, he is in position to illustrate the lecture in any school which can provide a lantern and a screen.”

For the next four decades the house would be home to a succession of families—none quite so engaging as Dr. Heitzmann or the anti-smoking minister.  In 1965 it was converted to two duplex apartments.  At some point the rich brick-and-brownstone façade was given a misguided coat of paint. 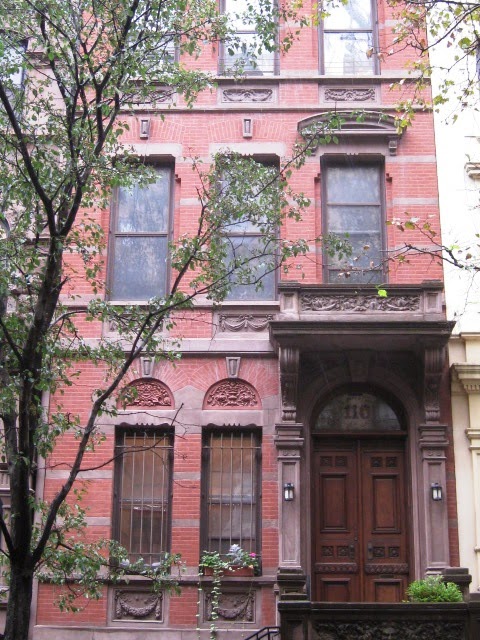 When, in 2007, the owners sought to restore the exterior, they worked with Walter B. Melvin Architects and East Coast Restoration and Consulting Corp.  A complete façade restoration followed, including the stoop.  Two years later the remarkable results earned the project the Unsung Heroes of the Upper West Side for façade restoration by Landmark West!  The group said “Restored to its former glory, it is a model for owners seeking to undo the mistakes of the past and preserve their historic buildings for generations to come.”