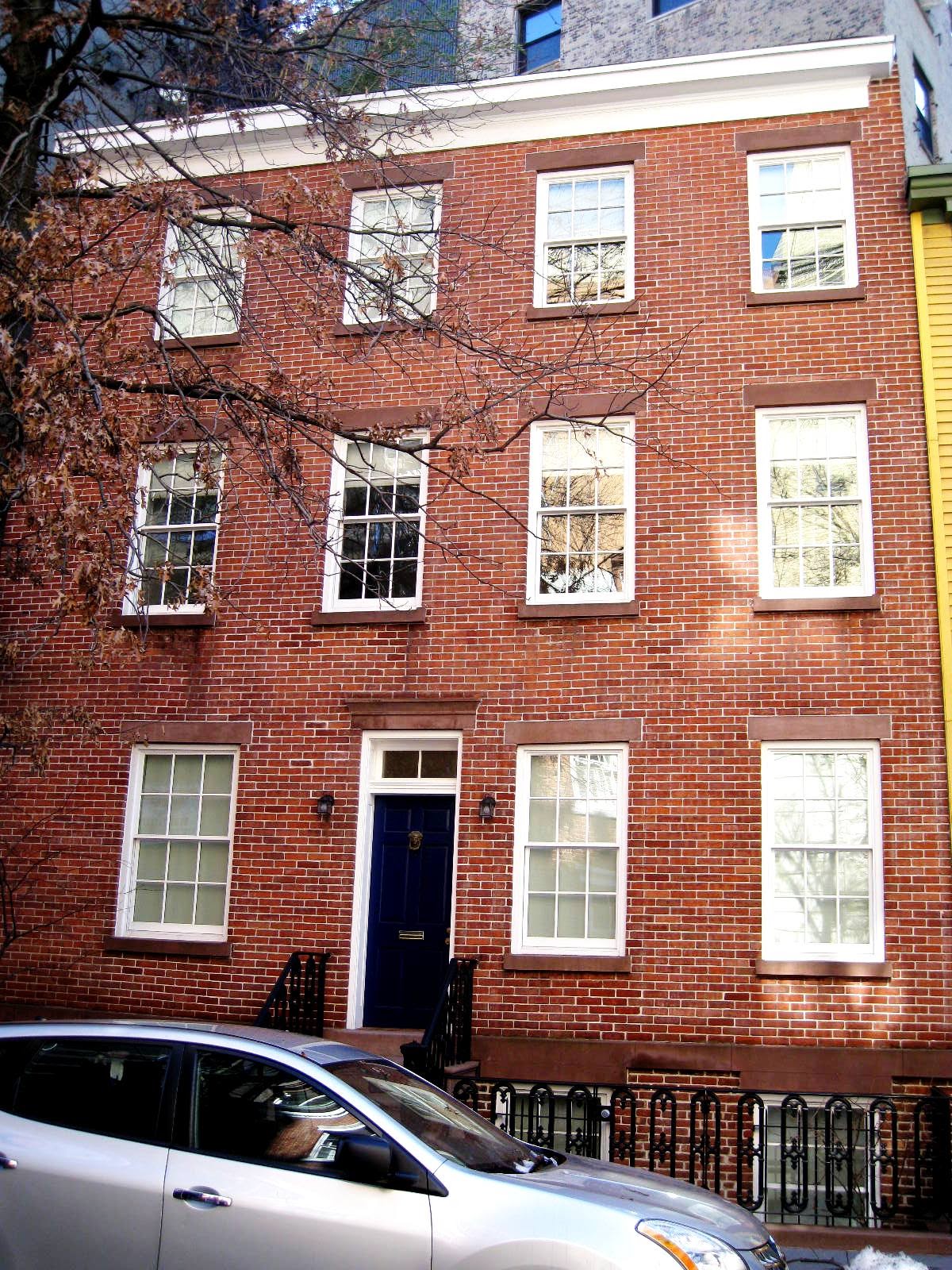 In 1833 carpenter and wood inspector John Springsteen move into the rented, wood-framed house at No. 132 Charles Street.  By now Greenwich Village, a sleepy hamlet a dozen years ago, was quickly developing into a thriving community north of New York.  Springsteen’s two brothers, Levi and Joseph, were also in the construction trade and when John purchased the house 16 years later, they all moved in together.

Joseph was a mason and, like his brother John, Levi Springsteen was a carpenter.  In 1853 the men remodeled the house, raising the pitched roof to a full third floor.  At the same time they replaced the stable next door at No. 130 with a handsome but unassuming brick dwelling.  A roomy 29-feet wide, it rose three stories above an English basement--an unpretentious working-class version of the recently-popular Greek Revival style. John and Levi stayed on in the wooden house while Joseph moved into the new house at No. 130.  Just two years later John died, leaving the two brothers as next door neighbors.  Joseph rented at least one room in the brick house and as the Civil War drew to a close Andrew Yale, a “carman,” was living in the house.

Joseph was apparently quite successful in his trade.  On Thursday January 13, 1870 at around 3:00 in the afternoon the family was away from the house and burglars broke in.  The New York Herald reported that “a sneak thief or thieves entered and stole $500 in money from a bureau drawer on the first floor; also two silk dresses and furs valued at $600.”  The cash alone would amount to about $8,600 today, and Mrs. Springsteen’s high-end apparel over $10,000.

Neighbors had noticed “three young men” loitering about the house at the time of the robbery and descriptions were furnished to the police.

When Levi Springsteen moved out of No. 132 in 1872, Joseph moved in; giving his son Charles the use of No. 130.  Joseph Springsteen retained ownership of both properties, however.  Charles brought worry and a bit of embarrassment to the family in the spring of 1876 following some trouble in Jacob Peth’s barroom at 536 Hudson Street; just a block away at the corner of Charles Street.

Charles was drinking in the saloon around 11:40 on Wednesday night, May 31, when the bartender, Albert Kessler, and truck driver George Louglan got into a dispute over payment for some drinks.  “George Louglan sprang over the counter and assaulted him (the bartender), and Peth interfered,” reported The Sun.  “Then Charles Springstein [sic] grappled with Peth and in the struggle they made for the door and both got out on the sidewalk.”

In the meantime, Dr. A. G. Chadsey was walking down Charles Street and heard the smashing of glass in the barroom.  The Sun said that he “immediately afterward saw a man running out closely followed by another man.  The pursuing man halted at the door.  Just then he saw the flash and heard the report of a pistol, and the man who first ran out of the barroom fell near the outer edge of the sidewalk.  The bullet entered the man’s right eye, and the Doctor thinks that the wound is fatal.”

The man struck by the bullet was Charles A. Springsteen.  The newspaper noted that “Springstein [sic] is about 23 years of age, and is of a very respectable family who have been residents of the Ninth Ward for many years.”

Police Officer McCarthy heard the shot and ran to Peth’s barroom, but found the door tightly bolted from inside.  With the assistance of another policeman, Roundsman Rannie, he forced the door; but the men on the other side pushed back as vigorously.  Officer McCarthy’s fingers were smashed in between the door by the men inside trying to prevent the policemen’s entrance.

After the officers finally broke in, Peth, Kessler and Louglan were all taken into the station house.

In the 19th century fatally-wounded victims of crimes were interviewed for “ante-mortem depositions.”  The theory was that a dying man would not lie and his death bed testimony was admissable in court.  On June 5 Coroner Eickhoff arrived at No. 130 Charles Street to take the ante-mortem deposition of Charles Springsteen.  The good news was that the young man appeared to be reviving; the bad news was that his testimony was no longer legally dependable.

“On arriving at the house Eickhoff found that Springsteen was not in immediate danger, and his statement was not taken,” reported The New York Times on June 5, 1876.

Two years later Joseph Springsteen moved back into No. 130—again.  Things for the Springsteen family in the house continued quietly until Joseph himself ran into trouble in March 1898.

At No. 80 Sixth Avenue was The West Side Club, run by “The Allen” a notorious criminal who ran illegal gambling operations known as “poolrooms.”  The term did not refer to the game of pool; but to horse race betting.

On March 8 Police Captain Chapman, Sergeant Walling and 15 policemen headed to the West Side Club in plain clothes by different routes.  They were armed with axes and jimmies.  Police broke down the barred front door with an axe.  In a clubroom upstairs were a 27 men looking innocent enough.  But when a series of backrooms was broken into, they found 168 more men and “It was in those that the real business of the place, the police say, was done,” reported The Sun.  “Tables with wires attached, that had been used by telegraphers, were found there…Capt. Chapman says he saw a lot of cards such as are used by bookmakers burning in [a stove].”

A total of 196 men were arrested.  “All but one of the prisoners was held.  The exception was Joseph Springsteen, 84 years old, of 132 Charles street, who said he went to the place with a friend, who, he thought, went there to bet on the races.”

The Springsteens continued to rent at least one room and at the turn of the century the family of Owen Murphy was living here.  Murphy died in the house at the age of 45 on August 23, 1901.  His 11-year old daughter Anna died here two years later.

The elderly Joseph Springsteen lived on in the house he built more than half a century earlier until 1904.  It passed on to Charles, and then to Walter F. Springsteen; but was lost in foreclosure in 1914.

The building was operated as a rooming house and changed hands twice before Miriam Meredith Taylor purchased it in 1927.  In April of that year she converted it to “non-housekeeping apartments.”   No. 130 Charles saw a rapid turnover in ownership—it was bought and sold every year between 1930 and 1933.  At the time it was listed as having “seven studio apartments.”

The neighborhood was decidedly blue-collar during the mid 20th century, as evidenced by tenants like Meyer Abrams, a truck driver who lived here for several years in the late 1930s.  Then in 1964 it was reconverted to a single-family home by owners Mary Frank and Virginia Siep.

In 1979 it was renovated again by owner Bruce Whyte who placed the dining room in the English basement, a library and living room on the first floor, and two bedrooms each on the upper floors.

Both of the Springsteen homes are in a remarkable state of preservation—reminders of a time when Greenwich Village was a separate community.