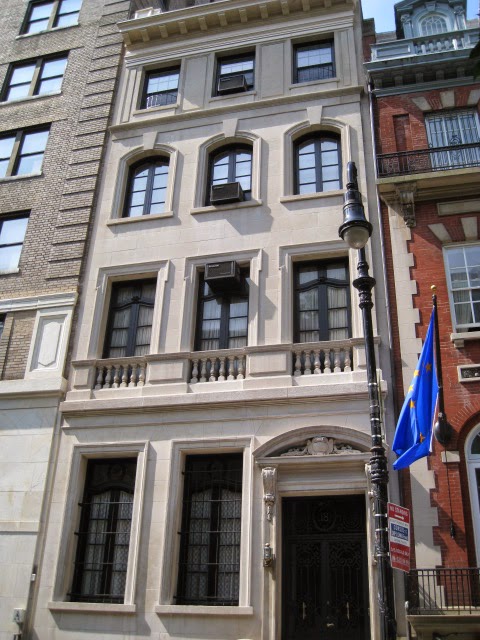 In 1906 when Henry Block and his wife, Alice, laid plans to update their Victorian brownstone at No. 18 East 76th Street, they were climbing on a renovation bandwagon that stretched from Murray Hill to the Upper East Side.  The streets of these upscale neighborhoods were lined with comfortable rowhouses mostly constructed during a building flurry following the Civil War.  Now wealthy homeowners hired the best architects to upgrade their homes into fashionable and modern Edwardian mansions.

The Blocks’ house had been designed by John G. Prague for speculative developer William Noble.  It was one of ten identical residences that stretched from No. 10 to 28.  Construction began in 1881 and was completed a year later.  No. 18 would sit unoccupied for a year and a half.  Then, on May 31, 1884 The Real Estate Record & Builders’ Guide reported that William Noble had sold “the four-story and basement brown stone house, No. 18 East Seventy-sixth street…with a three-story extension, to George C. Clausen, the brewer, for $65,000 cash.”

George Caspar Clausen’s cash outlay would amount to about $1.5 million today.  As The Guide intimated, Clausen was indeed a brewer; a member of Henry Clausen & Sons.  George’s father, Henry, had arrived in New York from Bremen, Germany and, after trying his hand at the mercantile business, turned his focus to brewing beer.

New York State’s Prominent and Progressive Men said, in 1902, that “seeing the vast opportunities in the rapidly increasing popularity of beer as a beverage, he founded in New York city the great brewing establishment of Henry Clausen & Sons.”  When young George graduated from a military college in Maryland and then returned home from studying in Germany, he was taken into his father’s brewery as a partner.

George was more than a brewer, however.  He was head of the insurance firm Clausen, Bayley, & Kearney, and on January 4, 1893 was appointed by Mayor Gilroy a Commissioner of the Department of Taxes and Assessments.  By the turn of the century he would be President of the Park Board, and a Park Commissioner.

The family would grow within the house to include a son and daughter.  George’s wife went about the routine expected of the wife of a wealthy businessman (The New York Herald mentioned that “An afternoon tea will be given by Mrs. G. C. Clausen at No. 18 East Seventy-sixth street on February 1” 1887); while her husband busied himself with his clubs.  Clausen was not only President of the New York Riding Club; he held memberships in the Democratic, New York Athletic, the Larchmont Yacht clubs, as well as the Liederkranz and Arion societies.  New York State’s Prominent and Progressive Men added, “He is also a member of the New York Driving Club, and is one of the best-known horsemen on the pleasure drives of New York.”

By 1901 the Clausen’s daughter was reaching her coming-out age, and their son was off at Princeton.  That year they sold the 76th Street house to the Henry and Alice Block.  It would appear, though, that the new owners had second thoughts.  On April 18, 1902 the New-York Tribune reported “Alice A. Bloch [sic] is reported to have sold No. 18 East Seventy-sixth-st., a four story and basement dwelling house.”

If they intended to sell, the deal fell through and instead the house was leased to Mrs. Douglas’s School.  The exclusive girls school had been instructing the daughters of Manhattan’s wealthiest citizens for half a century.  Mrs. Douglas’s School accepted only 25 pupils at a time, charging their parents $1500.00 per year in 1905—just under $40,000 today.

But that same year the school moved to a new mansion at No. 42 Riverside Drive; leaving the Blocks with a decision to make.  They commissioned Herts Bros. to do over the outdated brownstone.  Renovations began in 1906 and would not be completed for a year.

Somewhat surprisingly, and perhaps as a cost-saving move, the firm did not eliminate the stoop and move the entrance to street level.  At the time the “American basement” plan was all the rage and as one-by-one the rest of the brownstones on the block were revamped; only No. 18 would retain its stoop.  The result was that despite the limestone façade with its marriage of neo-Classic and Beaux Arts elements; the Block house still looked like a made-over Victorian.

On April 22, 1908, a few months after the renovations were complete, The New York Times reported that Alice leased “for a long term to H. Carroll Brown, 18 East Seventy-sixth Street, a new five-story dwelling.”  At the time the Record & Guide called it “a new 5-sty low entrance modern residence.”

H. Carroll Brown was a member of the banking firm H. C. Brown & Co. at No. 49 Wall Street.  He had married Mary Daly, the daughter of Marcus Daly (called by The New York Times “the multi-millionaire Western copper king”) in 1901.  The couple had two children, Margaret and Frances.

The Browns’ country estate, Brookland Wood, in Maryland had been in the family for generations.  It had once been the home of Richard Caton, son-in-law of Charles Carroll, signor of the Declaration of Independence.  The Times would later remark “Both Mr. Brown, Sr., and H. Carroll Brown were hosts at many notable social events held there, one of the most important annual occurrences being the steeplechase known as the Brooklandtown handicap.”

Mary's millionaire father, who died in 1900, had established his copper mines in Montana.  In early April 1911 Mary boarded a train to Anaconda, Montana with her mother and brother.  Once there, the high altitude affected Mary’s weak heart.  When her condition worsened, she was put on a special train to speed her back to New York and medical specialists.  On the train with her were her relatives, two physicians and several nurses.  “And the long race for sea level began,” reported The Sun on April 30.

H. Carroll Brown rushed in the opposite direction to intercept the special train, which he met and boarded in Chicago.  When the train arrived in New York, Mary was transported to her mother's mansion at No. 725 Fifth Avenue.  “On her arrival in town…the sick woman was taken in an automobile to her mother’s house,” said The Sun.  “Her heart was weak and toward midnight she had a relapse that resulted in her death.”

H. Carroll Brown would not stay on in the East 76th Street house.  In 1912 he leased it to John D. Ryan, and on November 13 the following year newspapers reported that Emmet Queens had leased the house.  In reporting on the lease, The Record & Guide deemed it “a very handsome interior 5-sty stoop house.”

The Queen family had not been in the house long before they purchased a French Bulldog puppy for son Morley.  The new pet was named Grisette III.

The family was still in the house in 1915 when daughter Philippa’s engagement to Robert Clement was announced; however the following year Henry Block leased it to George W. Peters.  It would become home to at least one other family, William E. Chambers and his wife Hazelle and their child, before wealthy shipbuilder James E. Shewan purchased it in 1924.

The  head of James E. Shewan & Sons, Inc., Shewan died in 1925, just months after moving in.  His 75-year old widow, Ellen, now lived in the East 76th Street house alone with only her servants.  The grown Shewan children--son, Edward, and three daughters –all lived elsewhere.

On the evening of April 16, 1925, the elderly woman sat in the library of the house when suddenly a man appeared in the doorway.  His face was partially hidden behind a handkerchief.  The burglar demanded the two rings she was wearing; but when he attempted to snatch her diamond bar pin, Ellen screamed.

Before servants could respond, the man had fled.

A little over four weeks later 25-year old William Homan was behind bars.  The convicted robber had been released from Sing Sing prison just 15 days before terrifying and robbing Ellen Shewan.  The New York Times, on June 23, reported “Homan was arrested in a furnished rooming house yesterday morning and the police say they found a loaded revolver and several pieces of jewelry in the room.”

Ellen Shewan continued to maintain her summer home in Cold Spring on the Hudson, New York, and to travel to Europe.  On April 16, 1935 she died in Mentone, France; leaving an estate of more than $1.3 million.

Ellen’s three daughters retained possession of the property until January 1952, when they sold it to Mrs. Susanna Mathieu “for occupancy” according to The New York Times.  If Mrs. Charles Mathieu indeed intended to occupy to mansion, she soon changed her mind.  Within a year the house was converted to doctor’s offices in the basement and first floor, a duplex apartment on the second and third, and a single apartment on the fourth.

In 1964 the house was being used as the Missionary Society of St. Paul the Apostle and Paulist Fathers Instruction Center; and for several years in the late 1960s and early ‘70s housed Spencer A. Samuels and Co. Antiques.  In 1980 it was converted one more; this time to a single apartment per floor.


Despite its many owners and several uses over more than a century, Herts Bros. sweeping makeover of the Victorian brownstone is remarkably intact.