In April of 1919 Park Avenue was no longer the marginal residential area it had been a generation earlier.  As quickly as the New York Central Railroads train tracks that ran down the center of the Avenue were submerged and covered, Percy Rivington Pyne erected his massive neo-Georgian style mansion at the corner of East 68th Street.  He was but one of the New York millionaires to direct their attention from Fifth Avenue to Park.

The Pyne house was completed in 1911 and eight years later The Real Estate Record & Builders’ Guide commented on the neighborhood.  On April 26, 1919 it wrote “Adjoining Mr. Pyne’s residence is William Sloane’s new residence, and beyond those are the homes of Henry P. Davison, of J. P. Morgan & Co., Arthur Curtiss James and George Blumenthal.”  The article also noted that Percy R. Pyne had disposed of another Park Avenue property – the four-story house directly opposite at the southwest corner of 68th Street; “one of the choicest spots on Park avenue.”  Pyne, according to The Sun, had purchased that house “to protect his home against the possible intrusion of an apartment house.”

The buyer was Harold Irving Pratt, the youngest of oil mogul Charles Pratt’s eight children.  The elder Pratt’s fortune had been greatly enhanced when his Pratt Astral Oil company merged with Rockefeller’s Standard Oil of New Jersey.  Now Harold I. Pratt served as Managing Director of Charles Pratt & Co. and, like his siblings, had a large fortune of his own.

Pratt simultaneously purchased the home of Mrs. Anderson Fowler at No. 678 Park Avenue, adjoining the property acquired from Pyne.  The combined package gave him a plot 100 feet wide on Park Avenue, extending 40 feet west on 68th Street.  The Record & Guide said “A new residence will soon be started on the combined plot which will be in keeping with the improvements to the north.”  The Sun agreed, saying “the new owner, who is a prominent New York man, will erect a handsome residence in keeping with the character of the section.”

The mansion that would soon begin rising would, indeed, “be in keeping” with the flurry of mansion-building in the Lenox Hill neighborhood.  In the meantime, the Pratts continued living in their full-floor apartment at the north corner of Fifth Avenue and 63rd Street.  At the yearly rent of $25,000 a year, The Sun deemed it “the next most expensive apartment in the world.”  For their hefty rent the Pratts enjoyed 25 rooms and seven baths.

William Adams Delano of the architectural firm Delano & Aldrich received the commission to design the new Pratt mansion.  The firm, which was busy simultaneously designing the Knickerbocker and Colony Club buildings, had recently made alterations to the Pratts’ sumptuous Georgian Revival country house, Welwyn, in Glen Cove, New York.

For the Pratt house Delano drew his inspiration from the English Regency, producing a four story limestone house with restrained ornamentation.  Somewhat unexpectedly, the entrance was placed on East 68th Street; possibly because the of noticeable southern decline of Park Avenue.  Above the rusticated base, relieved by a regimented series of arched openings, was a delightful carved frieze of seashells.  The openings of the fifth floor were octagonal—a popular Regency motif.

By February of 1920 the Pratts had moved into their new home.  Harriet Barnes Pratt wasted no time in opening the house for entertaining—often in conjunction with her active philanthropies and other interests.

As the chairman of the Parents’ League she was instrumental in the founding of the Commonwealth School.  “At the Commonwealth School daughters of millionaires, multi and otherwise, learn of the economic and industrial problems which face the community in which they live—and the state,” explained the New-York Tribune on May 16, 1920.  “They learn of the responsibilities which they must face in the present day world as guardians of the world’s wealth.”

The Pratt children had a significant chunk of the world’s wealth to guard.  The financially and politically powerful circles in which the Pratts moved were evident on September 13, 1921 when President Harding paused to play a game of golf on Long Island.  The First Lady politely watched the first hole, then “retired to the clubhouse” where tea was served to socialites including Mrs. William K. Vanderbilt and Mrs. Harold Pratt.

Harriet’s entertainments could be instructional as well as social.  On November 28, 1922 she hosted a lecture musicale by Kurt Schindler and Paul Kochanski in the house.  The topic was “Ancient and Modern Violin Music.”

Far less didactic were the events surrounding Eleanor Pratt’s debut to society in 1927.  On Tuesday night, December 27 the ballroom was thrown open for a dance “to introduce their daughter.”

By now Harold had become a member of the Council on Foreign Relations.  Founded in 1921, the group’s purpose was to “afford a continuous conference on international questions affecting the United States, by bringing together experts on statecraft, finance, industry, education and science.”  Members were chosen “for their knowledge of foreign affairs and their ability to contribute to discussions and debate.”

The year 1929 began a flurry of activity in the Pratt household.  On June 10, 1929 son Irving married Ellen Rice Hallowell in Milton, Massachusetts.  The following year, in September, Barbara was feted with a debutante ball at the Glen Cove mansion; and a few weeks later, on October 23, Eleanor’s engagement to James Ramsay Hunt, Jr. was announced.

Despite the Great Depression, life in the Park Avenue mansion was little changed for the Pratts.  On November 28, 1933 Barbara married David Richmond Wilmerding in the Church of the Heavenly Rest.  The New York Times called it “an elaborate ceremony.”  The newspaper made note of the “unusually large bridal party.”  After the ceremony a reception was held in the Pratt mansion.

In March 1937 the Pratts donated a 12-acre park to the city of Glen Cove.  Harriet “not only supervised the landscaping but planted many of the bulbs and shrubs herself,” said The Times.  Harriet was Chairperson of the City Planning Commission and the park was named in honor of her—the Harriet Barnes Pratt Park.  The couple’s gift was estimated to be worth about $250,000.

Two years later Harold Irving Pratt died of pneumonia at Glen Cove at the age of 62.  Following Harriet’s period of mourning, entertainments in the Park Avenue mansion would be understated.  On February 19, 1942 The New York Times mentioned a dinner party she hosted the night before for just three guests.

On September 25, 1944 the Council on Foreign Relations announced that Harriet Barnes Pratt had presented the group with the Park Avenue mansion “as a memorial to her husband…It will be called the Harold Pratt House.”

The directors stressed that in accepting the gift, they had “made permanent provision for the proper upkeep of the new house.”  John D. Rockefeller, Jr., although not a member of the Council, provided half of the $300,000 maintenance fund that had been raised.  “Although Mr. Rockefeller is not a member, three of his sons are, and he always has taken an interest in its work,” said the announcement.

Throughout the following decades the Harold Pratt House would see the comings and goings of heads of state and other political and economic leaders who spoke here.  Among them would be French Premier Pierre Mendes-France in 1954, Konrad Adenauer in 1953, Emperor Haile-Selassie in 1954 and Vietnam President Diem in 1957. 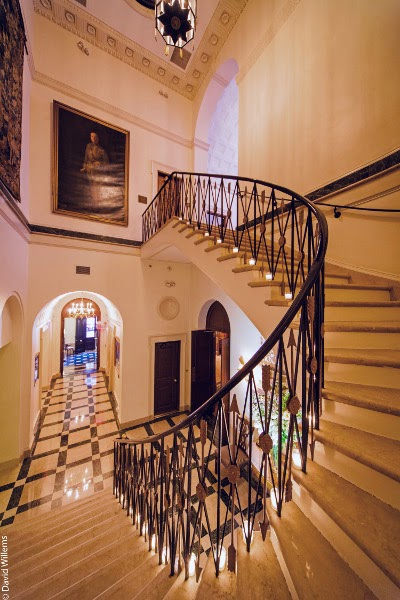 Nearly a century after the Pratts moved in, the exterior of their dignified mansion remains unchanged.  The house is still the New York City headquarters for the Council on Foreign Relations.
Posted by Tom Miller at 2:38 AM