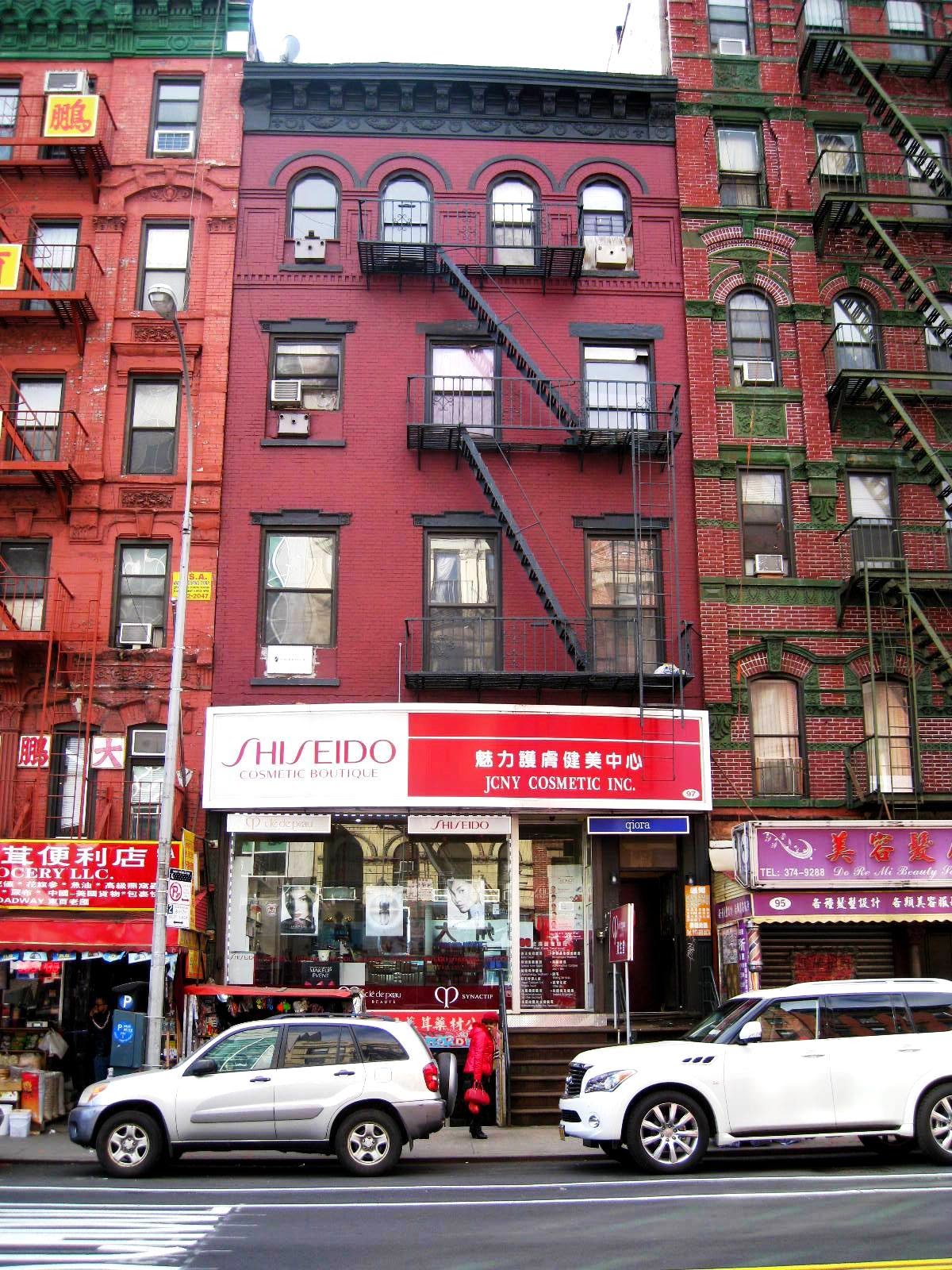 When the Bowery Savings Bank opened on the Bowery in 1834, the nearby East Broadway neighborhood had recently filled with impressive Federal style homes.  Among them was the three story residence at No. 97.  Like its neighbors, the house sat above an English basement and, most likely, handsome pedimented dormers sat above the cornice.  Clad in Flemish bond brick, it boasted especially fine molded lintels with end blocks.  Inside there would be costly hardwoods and marble mantels and furniture from New York’s finest cabinetmakers.

The wide homes attracted well-to-do families like that of James Marsh who moved into No. 97.  Marsh was a Trustee of the Bowery Savings Bank and would remain in the house at least into the 1840s.

But a quarter of a century later, by end of the Civil War, the Lower East Side had ceased to be fashionable.  Wealthy New Yorkers moved northward to the Washington Square, Fifth Avenue and Murray Hill neighborhoods.  The East Broadway area was now part of Kleindeutschland, or little Germany, as immigrants poured in and New York’s German population was outranked only by Berlin and Vienna worldwide.  Private homes, sumptuous only a generation earlier, became boarding houses or were razed for tenements.

Among the tenants living in No. 97 in 1869 was the Roth family.  Tragedy would strike on May 23 that year when 7-year old daughter Annie wandered off Pier No. 46 on the East River and drowned.  Making the catastrophe even more heart-wrenching for the family, The New York Times reported “The remains were not recovered.”

Many of the German and other Central European immigrants were Jewish; resulting naturally in the Lower East Side becoming the main enclave of that population as well.  Streets and tenement hallways rang not only with Polish and German languages, but Yiddish.  By 1878 No. 97 East Broadway was owned by Morris Alexander, a wealthy and influential force in the Jewish community.

Alexander was President of the Ohavay Sholom synagogue and an ambitious businessman.  While he and his wife, Deborah, lived in the house; they continued operating it as a boarding house and Morris ran a pawn shop from the lower level.  His considerable wealth was increased by the purchase of nearby real estate and the collecting of rents.

On March 24, 1878 Deborah Alexander opened the Ladies’ Deborah Nursery and Child’s Protectory.  “The object of the protectory is to receive every morning the children, from 2 to 6 years of age, of indigent parents, who have to work during the day, and feed them well while the parents are at work, returning them to their parents in the evening,” reported The New York Times.  The day care center opened with 59 children “received and well cared for.”

The Ladies’ Deborah Nursery and Child’s Protectory was a success.  The Alexanders’ concern for children in need seemed to reach into their personal lives as well when they adopted a girl, Esther, and a boy, Charles.  The seemingly selfless acts would eventually cause the couple trouble.

In 1884 Charles, who was now 15 years old, helped out in the pawnshop.  He had been living with the Alexanders for several years and that summer Morris realized that his adopted son was a thief.  The New York Times reported on June 23 that “during the last three weeks he has been taking the articles to other pawn shops and getting the money for them.  Alexander says that from $500 to $1,000 worth of goods are missing.”

In light of the substantial loss—between $12,000 and $23,000 today—Morris’s nurturing attitude toward Charles came to a halt.  “The boy was remanded at the Essex Market Police Court yesterday until the detectives could look up the amount taken and, if possible, recover some of the property,” reported The Times.

It was around this time that Alexander raised the attic to a full fourth floor.  The decorative embellishments of the generally Romanesque Revival addition were executed in brick.  While the aim was no doubt to save money; the result was not unattractive, if architecturally incongruous.  A pressed metal cornice completed the renovation.  It was probably at this time that the cast iron entrance and expansive shop windows were installed.

In the meantime, the Ladies' Deborah Nursery and Child's Protectory had grown immensely.  By 1896 it sheltered 66 boys at its facility just down the block at No. 103 East Broadway; 106 boys at 141st Street and Forest Avenue; and 222 girls on 161st Street.  The list of trustees of the charitable organization read like the Alexander family tree.  The Sun noted on April 9 that year that “The active trustees of the institution within recent years were:  Mrs. Deborah H. Alexander and Morris Alexander, her husband; J. M. Alexander, their son, and his wife, Mrs. J. M. Alexander; Mrs. L. Burger, their daughter, and her husband, Mr. L. Burger.”  Esther had married and the newspaper included her on the list as “Mrs. E. Meyer, their adopted daughter.”

As it turned out, the charity was not as charitable as would seem.  The Sun wrote “A remarkable condition of affairs has been found to exist in the Ladies’ Deborah Nursery and Child’s Protectory of the City of New York.”  A committee of the State Board of Charities had investigated the institution and its findings were embarrassing to the Alexanders, at best.

Morris owned No. 103 East Broadway and charged the Nursery $150 a month in advance (about $4,000 today).  He also owned the building at No. 11 Market Street “which supplied groceries to the nursery.”  The State committee was especially interested in the financial outlays of the Deborah Nursery because it received almost all its funding from the City of New York—about $40,000 a year.

Because the extended Alexander family repeatedly voted itself into executive positions, there was little outside oversight.  To make matters worse, the report said that many “books of account, vouchers etc. are missing, and some of those produced show irregularities in the care and disposition of large funds.”

Chiming in, The Sun said “although the nursery was designed for the care of Hebrew children, it has not the respect of prominent Hebrew philanthropists of the city, is not in good repute with the officers of the United Hebrew Charities, and is not in favor with the Society for the Prevention of Cruelty to Children.”

The following year, in September 1897, Morris Alexander died.  Although his estate, which included several Manhattan properties, was estimated to be about half a million dollars, Morris had no will.  When the State asked Deborah for the division of the estate, she denied that Esther Mayer was her adopted daughter.  Enraged, Esther filed suit against the beneficiaries and, in doing so, exposed an even more shocking revelation.  On March 17, 1899 The New York Times disclosed that her suit alleged “that she was really the daughter of Alexander by a first wife, Hinda Schmikler, whom he married in Russia over forty years ago and from whom he had been divorced by the rabbinical law.”

The messy and highly publicized trial pitted Esther, fighting for a share in the estate, against Deborah, whose attorneys claimed “she is not the daughter of the decedent” but “she was a waif.”

Deborah Alexander, now aged and wealthy, soon turned her attention to love again.  Surprising the entire community, in November 1901 she suddenly married Rabbi Hyman Jacob Widrevitz, “a preacher of high standing in the community,” according to The Times.  The rabbi was somewhat younger than his 75-year old wife.

The honeymoon would not be over before Deborah Alexander Widrevitz was dead.  Six weeks after the wedding she died “very suddenly” in the house at No. 97 East Broadway.  On Thursday, December 26, Dr. Francis Huber was called to her bedside “about the time the woman was breathing her last,” said The Times.  He refused to sign a death certificate because he had not been in attendance for 24 hours prior to the death.

The funeral was delayed awaiting the Coroner’s physician, Dr. Weston.  He arrived on Friday evening and pronounced the cause of death “Bright’s disease coupled with heart failure.”  But wagging tongues in the neighborhood suspected foul play.

That night a “near relative” visited Dr. Weston and “with more hints than clear statements he managed to convey the idea to Dr. Weston that the latter might have been mistaken in his finding of the cause of death.”

Because Deborah’s funeral had been delayed and it was now Friday night, burial was impossible by Jewish law until Sunday.  That morning, at around 8:00, a crowd began forming in front of No. 97 East Broadway.  The taint of a nursery run for profit and a rejected adopted daughter were forgotten.  It was  foul play and suspected murder that gripped their minds.

By 11:00 in the morning the crowd was estimated at about 2,000.  “It rained, and there was nothing unusual to be seen,” reported The Times, “nothing unusual to be heard.  Up on the third floor of the building lay the body of Mrs. Widrevitz, who died on Thursday last, and who was much better known by the name of Deborah Alexander, which she made beloved and honored on the east side because of numerous benevolent acts.  She is perhaps best remembered by the many as the founder of the Deborah Nursery, which was considered a blessing on the east side.”

The crowd stood in the rain anticipating the arrival of the funeral carriages; but more importantly they knew that the Coroner’s physician was coming to make one last examination of the body.  “If the crowd had a reason for standing there in the rain,” said The Times, “nobody would whisper it.  If honor to the dead was intended, the form in which it came to the husband and relatives of the dead woman was not appreciated.”

Just before 11:00 the funeral carriages began arriving.  Then Dr. Weston appeared.  “His arrival caused something like a flutter of excitement in the crowd.  A murmur of surprise or satisfaction, it was not easy to tell which, was audible, but nobody said anything which was clear and distinct.”

But when Dr. Weston announced he was there to perform an autopsy, “there was again a reversal of opinion.  It was decided that all suspicion concerning the woman’s death had vanished.”  Dr. Weston took formal statements of relatives and left.

A reporter milled about the crowd, asking who evoked so much suspicion.  One man answered “A few old women who saw Mrs. Widrevitz on the street on the afternoon of the day when she died, and seemed incapable of bringing themselves to believe that she could have expired so suddenly from natural causes.  That was all.”

Hecht continued renting rooms above the store level.  Here on August 11, 1906 80-year old Morris Donn, “fearing that he was incurably ill and was fated to die a lingering death,” committed suicide.  “The body was found by his son David, who had supported his father for fourteen years,” said a newspaper.  “The young man was so overcome with grief and shock that he collapsed.”

Hard working, poor Jewish families continued to rent in the building.  In 1911 sisters Gertrude and Mollie Fridlander lived here.  They both worked as milliners and that year they made room in their apartment for their sister, Rosa Goldberg and her husband Sol and their three children.  Sol was a “bottler.”

The Manhattan Bridge opened three years after the tragic suicide.  In 1912, as Carrere & Hastings planned the monumental approach to the bridge, the East Broadway neighborhood would be devastated.  A swatch of land 400 by 750 feet was leveled and over a thousand families lost their homes.  The block where No. 97 stands escaped obliteration by mere feet. 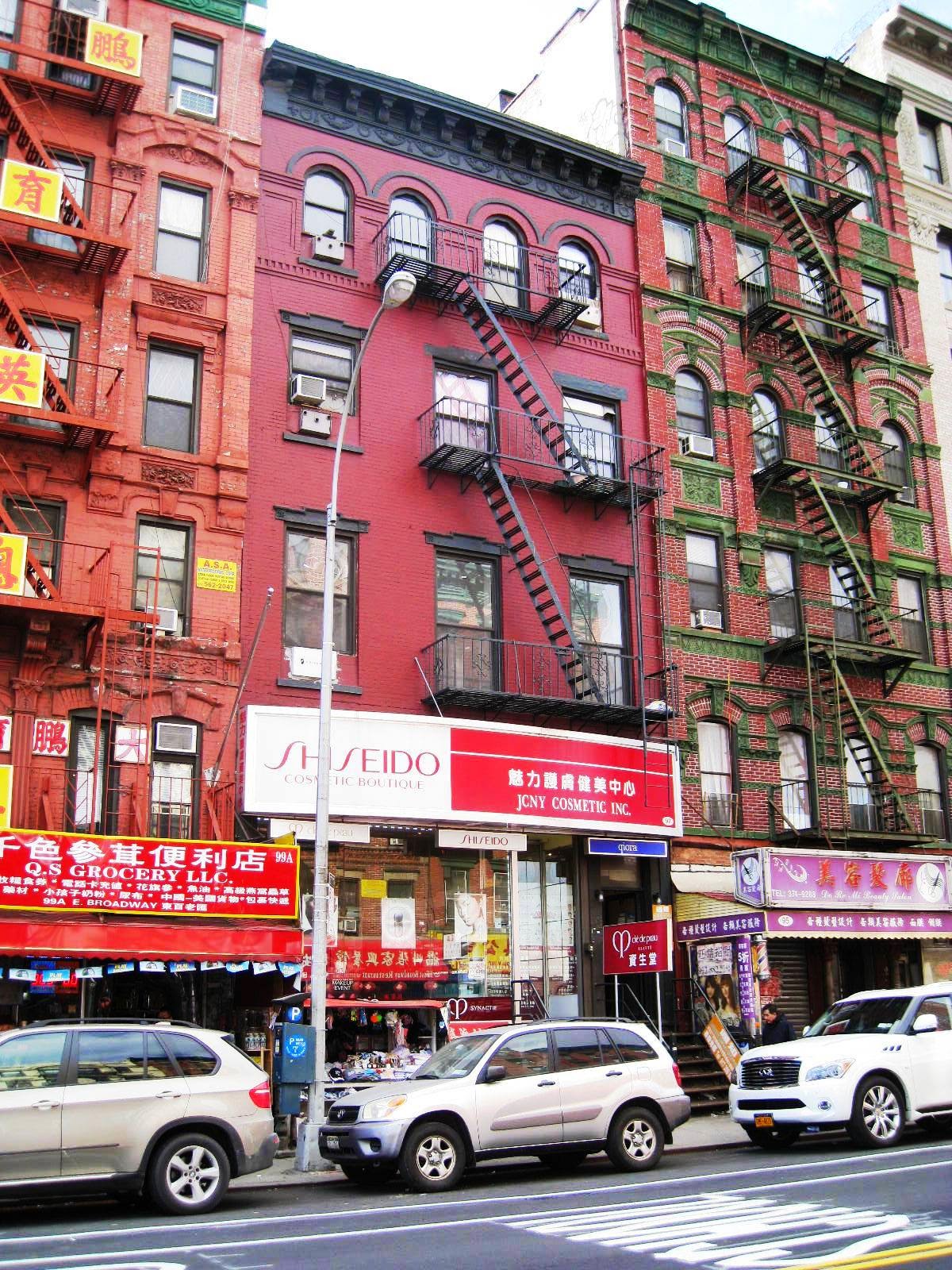 There is little evidence today of the refined 1830s neighborhood James Marsh enjoyed when he lived at No. 97 East Broadway.  No longer German nor Jewish, it has been engulfed by the expanding Chinatown neighborhood.  Yet despite the carnage done to the parlor and basement floors, and Morris Alexander’s late Victorian fourth floor addition; it is still easy to imagine the house in quieter, more refined days.