When yellow fever washed over New York City in 1798, a clerk in the Bank of New York was taken ill.  Fearing the bank would be quarantined and closed, directors purchased eight lots in the rural Village of Greenwich.  Here it established a branch on an unnamed street and christened the road Bank Street.

The sleepy street remained relatively unchanged until the devastating 1822 plague of yellow fever drove hundreds of city residents north to Greenwich Village.  Bank Street saw relatively rapid development; but it would not be for another two decades before speculative developer Stephen B. Peet erected a row of ten especially handsome homes at Nos. 16 through 34.

Begun in 1844 the row of identical upscale dwellings was completed a year later.  Designed in the popular Greek Revival style, they were splashed with elements of a newcomer in architectural design—Gothic Revival.  The brick homes had rusticated stone basements and brownstone trim.  They featured Greek Revival areaway and stoop ironwork, and handsome doorways in that style.  But within the highly unusual entrance canopies, and mimicked in the window lentils, were graceful ogival-type Gothic arches.

Anchoring the row was No. 16 at the corner of Waverly Place.  Corner sites were highly prized by row house purchasers because of the additional sunlight through the side windows.  Oddly enough No. 16 did not take advantage of this; with a minimum of openings appearing on the Waverly Place façade.

Sometime after the end of the Civil War the house was purchased by Elias Day.  Day was well-known in Greenwich Village real estate circles and he purchased numerous properties as rental income.  He was described by The New York Times in 1893 as “one of the oldest and one of the best-known residents of that section when it was comprised within the fashionable quarter of the city.”

Among his properties was No. 16 Bank Street and upon his death in 1892 it, along with nineteen other Village buildings, was inherited by his daughter Hester A. Gregory.  At the time the house was rented for $1,100 a year—about $2,500 a month today.  In the process of settling her father’s estate, Hester put all the properties on the auction block on March 9, 1893.

No. 16 Bank Street was sold to Francis Hessberger for $17,400; or about $435,000 in today’s dollars.  Six months later, he filed plans for alterations to the “four-story brick dwelling” at a projected cost of $2,500.  Hessberger’s project apparently became more ambitious and within the month, on October 11, 1893, he filed for additional renovations—these costing $1,200—to what was now described as a “four-story brick store and dwelling.”

Greenwich Village lore tells romantic stories of saloons, brothels, and horse stables below the handsome parlors of No. 16 throughout its 19th century lifetime.  But it was most likely Hessberger’s 1893 alterations that resulted in “a store” at the basement level of the house.

The building changed hands rather quickly.  In April 1898, five years after the renovations, Elizabeth F. Gregory took out a $12,180 mortgage on the property.  At the turn of the century it was owned by John Davis; who sold it to next-door neighbor George Budke in March of 1901.

Budke in turn sold both houses, No. 16 and 18, to the highly-active real estate real estate dealer Joseph L. Buttenweiser.   Greenwich Village was, by now, New York's mecca for artists, musicians and writers.  Buttenweiser sold them in April 1920 to the well-known portrait artist Henry Martyn Hoyt.

Hoyt maintained a studio-apartment at No. 37 West 10th Street; on the same block as the famous 10th Street Studios building.  The highly successful painter was separated from his wife who moved to New Jersey.  On the night of August 25, 1920 another resident artist, William R. Bennett, found Hoyt dead.  He had “committed suicide last night by inhaling illuminating gas in the bathroom of his studio apartment,” reported The New York Times the following morning.  “The room was filled with gas and nearby on the floor lay a rubber tube attached to a jet from which the gas was escaping.  Hoyt had been dead for more than two hours.”

Two months later Hoyt’s estate leased both houses.  On October 31, 1920 the New-York Tribune reported “The lessees are planning to remodel them into apartments.”  The conversion had another far-reaching effect on No. 16.  The little commercial space in the basement was leased to a restaurant.

Patrons at Ye Waverly Inn were terrorized on the evening of February 1, 1929.  Patrolman Edward T. Coleman inexplicably broke into the basement apartment of No. 18 then fired three shots through the wall, into the restaurant.  Coleman was arrested and charged with malicious mischief and discharging firearms in a public place, “endangering patrons in the Waverly Inn next door.”

Upstairs, the apartments of No. 16 Bank Street saw the comings and goings of residents, some of whom were caught up in the Socialist and political movements of the 1930s.  One was 21-year old George Edwards, a member of the Student League for Industrial Democracy.  Edwards and his group was infuriated when a United Artists motion picture “Red Salute” opened at the Rivoli Theatre on Broadway at 49th Street in September 1935.  “The picture shows a radical youth in an unfavorable light in comparison with a conservative American, who is the successful rival for the heroine,” explained The Times.

Edward joined a large group of youths who protested outside the theater on September 28.  While most chose to do “mass picketing” with placards that read “Boycott Red Salute.  Students Want Peace.  United Artists Want War;” Edwards and another young man had a better idea.  As their associates caused a Broadway traffic jam outside, they bought tickets and joined the audience.

“In midafternoon two young men in the audience hissed and booed the picture so vociferously that the management summoned the police.”  George Edwards found himself arrested and facing jail time of six months to two years if found guilty.

Nancy Bedford Jones also lived in the building.  A member of the Young People’s Socialist League, she was like Edwards political, opinionated, and intent on having her views heard.  The 19-year old Hunter College student was sympathetic with the striking building service employees of No. 820 Park Avenue where Governor Lehman had an apartment.  She and a dozen other girls appeared in front of the building on March 6, 1936 wearing tin helmets and carrying toy guns and placards.

“Soon, while a score of bystanders were chuckling at the buffoonery twelve policemen tried to induce the girls to leave,” reported The New York Times.  They refused.  Nancy Bedford Jones and her colleagues were hauled away to be booked on charges of “disorderly conduct, singing and shouting and obstructing the sidewalk.”

That same year resident Helen Bayer would find herself at odds with police.  With the country mired in the Great Depression, Village artists like Bayer found relief through the WPA Federal Art Project that provided Government-paid jobs for illustrators, photographers and other artists.  But in December word came of “impending dismissals from the work relief rolls.”

Helen Bayer and 218 other men and women engaged in a two-hour “stay-in” strike at the WPA’s offices at No. 6 East 39th Street.  When police tried to eject the group, violence erupted on both sides.  “As men and women were hauled out of the throng and along the floor to the elevators, scores kicked, punched, clawed, spat at and even bit the policemen.  Some of the women fought back more fiercely than the men,” reported The Times.  “The police used their night sticks and fists freely on all who resisted and gave severe beatings to several.”

When 29-year old Helen Bayer appeared in night court she showed the signs of combat—“bruises on the left leg and back.”

While some of the tenants upstairs were leading somewhat tumultuous lives; Ye Waverly Inn continued serving homemade food to its loyal patrons.  After three decades of running the restaurant, Clarence Dettmers died on August 13, 1951.  His death, however, would not signal the end of the Inn nor of its tradition of good food and inviting ambiance.

That ambiance was shaken temporarily on August 16, 1958 when Stanley Sherman’s three-month old ocelot, Lancelot, made an appearance.  Sherman, a record company producer, had a third floor apartment at No. 246 Waverly Place.  His ocelot was in the dining room when he began listening to “Sounds of Parris Island,” a record documenting life in the USMC boot camp.

When the Marine Band began playing, the 15-pound Lancelot bounded out of the window in terror.  Mrs. Sherman saw him enter the cellar grating of the Waverly Inn where he sought refuge.  After a nearly two-hour ordeal of trying to coax the ocelot from its hiding place, the NYPD’s emergency squad gave up.  Eventually Sherman was able to retrieve the cat, which was taken away by the American Society for the Prevention of Cruelty to Animals “to treat it for shock and X-ray it,” said a newspaper.

Sherman was given a summons for keeping an unlicensed wild animal in the city.

In reporting on the sale of the building a year later, The New York Times noted that it “is occupied by the Waverly Inn, a Greenwich Village restaurant landmark for the last fifty years.”  The new owners renovated the apartments.  In 1962 there was one on the first floor, and just two on each floor above.

Ye Waverly Inn continues to be a Village destination today—although dinner can no long be had for 90 cents.  Another popular local legend is that a ghost inhabits the restaurant, fooling with the candles (blowing them out and relighting them) and starting fires in the fireplaces after they had been doused for the night.

Ghost or not, the restaurant has managed to retain its charm after nearly a century.  In 1995 New York Magazine critic Marsha Roberts listed some of its celebrity patrons—Quentin Crisp, Bebe Neuwirth, Bono, Edna St. Vincent Millay, Eugene O’Neill and Robert Frost among them.  “I know Ye Waverly Inn has a reputation for being one of the more charming dining spots in town, and having now experience it first hand, I can firmly state that all reports thus far have been greatly understated.”

Roberts called the Inn “an enduring slice of Old New York.”  She might as well have been talking about No. 16 Bank Street itself; or indeed the entire block that Stephen B. Peet erected in 1845.  The building and its neighbors form a remarkable slice of surviving Greenwich Village residential architecture--a wonderfully intact pre-Civil War street. 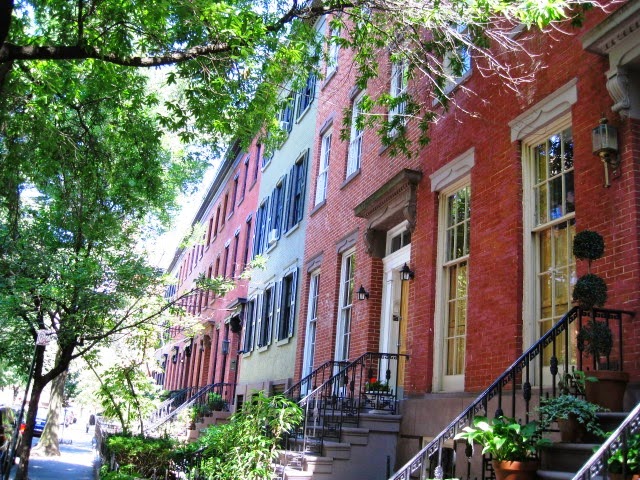 many thanks to reader Dwayne Hill for suggesting this post
Photographs taken by the author
Posted by Tom Miller at 2:57 AM