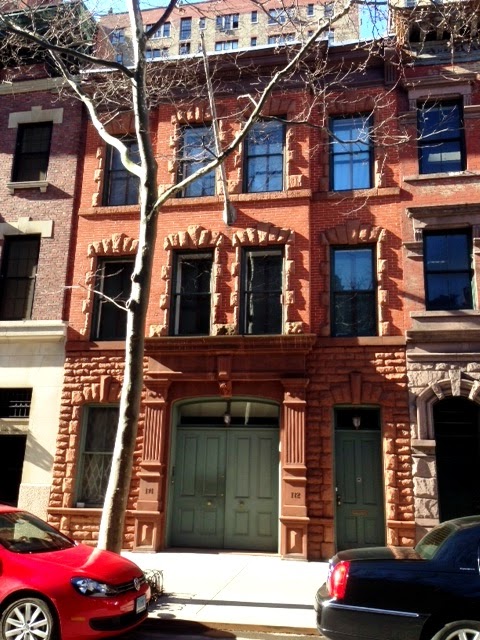 The block of East 73rd Street between Lexington and Third Avenues began changing in 1883 when millionaire Henry Marquand erected his handsome private carriage house among the brownstone houses.  Perhaps prompted by the odors and noises of stables, homeowners began moving away; their homes replaced by yet more carriage houses.  By the turn of the century the block was lined on both sides with the private stables of Manhattan’s wealthy.

Unlike most of the stables built on the block—individually designed for mansion-owners nearby on Fifth or Madison Avenue—the building that replaced the two houses at Nos. 172 and 174 East 73rd Street seems to have been built on speculation.  Designed by architect Frank Wennemer for Frank P. Perkins it was completed in 1889.  Perkins would not hold the stable for long.

Wennemer’s design was highly unusual.  Although the basic configuration fell in line with the expected central carriage bay flanked by a doorway and a window of matching size; the architect melded Romanesque Revival with the earlier neo-Grec style.  He made abundant use of rough-cut stone—comprising the base, the quoins and lintels of the openings—contrasted with smooth orange-red brick.  The heavy neo-Grec entrance framing featured hefty pilasters scored to insinuate fluting, and a fearsome beast’s head. 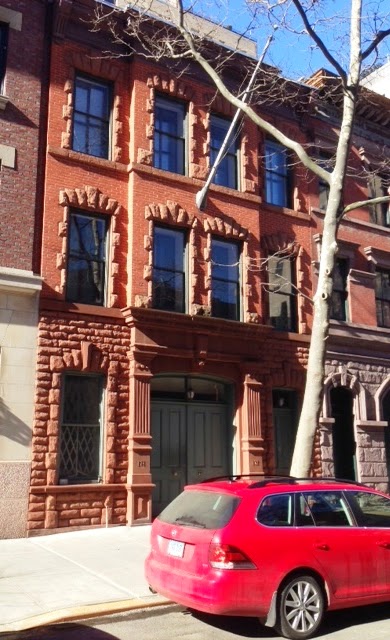 The newly-completed building was leased briefly to Ciancimino’s Towing and Transportation Company.  A few employees, like the company’s bookkeeper, Charles S. Fox, moved in upstairs.  Infighting within the firm may have led to its short stay on East 73rd.  On April 4, 1890 Peter Ciancimino was removed from his position as business manager by President Alrick H. Man.  Ciacimino did not take his dismissal well and continued to haunt the property, attempting to stay overnight, to gain access to the office after hours, and threatening the associates who lived there.  It all ended in an ugly court battle pitting the towing company against Ciancimino.

Before the year was up Perkins sold the stable to railroad magnate James B. Layng.  It was conveniently close to Layng’s mansion at No. 931 Fifth Avenue at 74th Street.  He was not only Vice President of the West Shore Railroad, but that same year he was made Vice President of the Cleveland, Chicago & St. Louis Railway as well.

With its purchase by Layng, the carriage house took on the role of the others on the block.  The millionaire’s horses and vehicles were housed on the ground floor, while stable-related staff lived upstairs.  In the meantime, the Layng family lived and entertained sumptuously four blocks away.

James Layng was a widower and it was his grown daughter who took over managing the Fifth Avenue mansion.  On March 30, 1892 The New York Times mentioned that “Miss Layng, the daughter of Vice President Layng of the West Shore Railroad, gave another of her Lenten dinner parties last evening at her home, 931 Fifth Avenue.  The table was beautifully decked with daffodils by Dards.”

A month after his daughter hosted the Lenten dinners, Layng astounded the public when he predicted that the railroads would achieve speeds unthinkable to 19th century travelers.  Popular Science, in April 1892, reported that he “sees no more difficulty in raising speed to a hundred miles an hour than has been met in increasing it from thirty to sixty; and believes that it will be more difficult to get a track clear for the train than to develop a speed greater than now seems possible.”

The Layngs summered, normally, at Tuxedo Park and Narragansett, Rhode Island.  The tycoon was not just about locomotives and train cars.  He had a softer side that was reflected in his deep interest in cattle breeding and gardening.  In November 1893 American Gardening reported on the Bedford Flower Club’s annual exhibition.  “J. D. Layng took the leading award for a collection with plants of fair quality,” it noted, and added “In Roses and Carnations, J. D. Layng was a strong exhibitor and his blooms of Souvenir du President Carnot, Perle, Mrs. Robert Garret, and Beauty were excellent.  His Carnations embraced all the best quality novelties.”

In April 1899 the 68-year old James B. Layng retired from the general management of the railroads; although The New York Times on April 10 commented he “has not yet laid off the harness entirely.”  In the meantime the carriage house on East 73rd Street continued serving the family’s transportation needs.  In 1900 census records showed that the upper floors were home to the entire Doughtery family—48-year old Rush, his wife Larra, and their two teen-aged children Lawrence and Lottie.

On February 11, 1908 James B. Layng died in the house on Fifth Avenue at the age of 77.   Calling him “one of the foremost railroad men in this country,” The New York Times added “He was connected during his railroad career with nearly every prominent railroad company in the East and not a few in the West.”

A year later, on November 10, 1909, The Sun reported that the Layng estate had leased the carriage house to N. T. Robb.  A major in the 12th Regiment of the New York National Guard, Robb had graduated from Harvard in 1893.  The banker was an officer in the Windsor Trust Company.
The estate sold the building on July 27, 1910 to John M. Bowers of the law firm Bowers & Sands.  On reporting the sale The New York Times noted “It will be used as a private stable by the new owner.”  The attorney paid $30,000 for the carriage house—about $710,000 in today’s dollars.

Bowers did not hold on to the property for long.  By 1912 it was home to the Kayton Taxicar and Garage Company, described by The Sun on July 30 that year as “engaged in the transportation and operation of motor vehicles for hire.”  Unfortunately for Kayton Taxicar, the firm went bankrupt that year.

The former carriage house was properly converted to a garage in 1919.  Meanwhile the upper floors continued to be used as residential space.  Here in December 1922 14-year old Molly Conway’s family was living when she wrote the winning composition on “Christmas Time in Our House” and won a silver dollar.

In August 1931 George E. Cook operated his business here.  He advertised his “Original Automobile Formulas” in Popular Mechanics.  “Have sold thousands of cans and bottles of goods made from these original formulas of my own,” he boasted.

Within the decade the upstairs accommodations were reflecting the high-tone flavor of the neighborhood.  Maude G. Robinson lived here in 1938 with her Eskimo spitz, Skippy.  In 1954 the structure was being termed an “apartment building” and in 1968 the Department of Buildings recorded its conversion to a single family home with a photo studio on the ground floor.


Today the ground floor where a railroad tycoon’s horses munched oats is home to the Scientific Introduction Service, a facility offering psychological counseling.  The eccentric exterior is nearly unchanged; a reminder of a time when this block of East 73rd Street bustled with grooms and stable boys maneuvering  the expensive horses and vehicles of New York’s millionaires.

photos taken by the author
Posted by Tom Miller at 3:09 AM