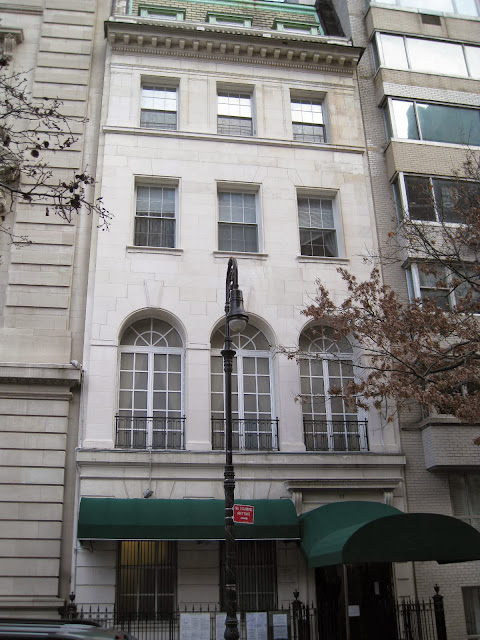 On June 25, 1908, John Bond Trevor married Caroline M. Wilmerding in the home of her parents at No. 18 East 77th Street.  The social status of the young couple was evident by those in attendance—Robert Walton Goelet served as best man, and assembled in the parlors were socially elite names like Mr. and Mrs. Orme Wilson, Mr. and Mrs. Franklin D. Roosevelt, the R. Fulton Cuttings, the Frelinghuysens, and Mr. and Mrs. Harrison McKay Twombly.

After returning from their honeymoon the newlyweds moved into the Trevor family home where Trevor’s mother and sister still lived.  But it was to be a short-lived arrangement.  John Trevor immediately began looking for a site for a new house for his bride and he found it on what was being called Carnegie Hill.

Andrew Carnegie’s massive mansion spanning the Fifth Avenue block front at 91st Street had been completed in 1903.  The steel magnate prudently protected his property by buying the surrounding land as well.  With his own home completed, he now carefully chose his neighbors.

John Trevor purchased the 26-foot wide building plot at No. 11 East 91st Street in February, 1909.  On May 22 he took the title to plot, spurring The New-York Tribune to report “John B. Trevor is going to be a neighbor of Andrew Carnegie…The façade of the proposed house will be diagonally opposite the main entrance to the house of Mr. Carnegie.”

The Trevors would be neighbors with Manhattan’s upper crust.  Next door, at No. 9, was the grand Renaissance palace of John Henry Hammond and his wife, the former Emily Vanderbilt Sloane; completed the same year as the Carnegie house.   The Hammond’s house abutted No. 7, the mansion of James A. Burden, Jr. and his wife, Florence Adele Sloans, Emily’s sister.  Their house had been finished in 1905.

Now John Trevor had to hold his own among the gargantuan mansions along the Carnegie block.  Two months later plans were well underway.  The New York Times reported on July 18 that “John B. Trevor is planning to erect a $100,000 residence.”  That figure would amount to about $2 million today.

Trevor had chosen his architectural firm, Trowbridge & Livingston, and on September 15, 1909 they filed their plans.  The Times offered little hint as to the outward appearance other than “It will be of brick and limestone ad will occupy a frontage of 26 feet.”

Construction took two years to complete.  Trowbridge & Livingston had wisely chosen not to compete for attention with the massive mansions of the Carnegies, Hammonds and Burdens.  The Trevor house, which was a fraction of the width of the other homes, instead showed quiet restraint.   Trowbridge & Livingston chose a toned-down version of the French Beaux-Arts Classicism style for the house.

The mansion was marked by a nearly-stark absence of ornamentation.   The Times deemed it a “handsome dwelling,” and opined “With the Carnegie, Hammond, Sloane and Townsend Burden residences they form a nucleus for a high-grade colony of fine houses.”

Three stories of planar limestone sat upon a rusticated base where the double entrance doors nestled below a prim cornice on two scrolled brackets.  The welcoming, shallow entrance stairs gently radiated out to the sidewalk.  Three sets of arched French windows at the second floor created the main focus of the design.  Above it all, the fifth floor in the mansard sat beyond the bracketed cornice.

The Harvard- and Columbia-educated Trevor had already established himself as a successful lawyer.  The couple would have two sons in the house—John B., Jr. and Bronson.  Summers were spent at their country estate, Glenview, on the Hudson River.

Trevor's professional influence spread beyond New York City.  In 1919 he was appointed Deputy Attorney General of the State of New York; a time when anarchists and other radical groups were responsible for bombings and related terrorism.  He worked with the Lusk committee investigating “subversive activities in the state,” as described by the Yonkers newspaper the Herald Statesman.

Trevor’s abilities were tapped by the United States military, as well, and following the end of World War I he was made Captain in the U.S. Army, working in military intelligence.    In 1920 he was associate counsel for the Sub-Committee of the U.S. Senate on Foreign Relations.

The ardently-patriotic lawyer worked doggedly at uncovering Bolshevist terrorists in New York.  Because many in that group were Jewish, he was repeatedly accused of being anti-Semitic.  The misinformed rumors persisted through his life and would result in accusations of his being pro-Nazi.

In 1923 John and Caroline sold their sprawling country estate to the city of Yonkers.  It became the largest park in that city, Trevor Park, and the old stone house was converted to an historical museum.  A year later, Trevor’s intense interest in the “immigration question” came to the forefront when he was influential in the adoption of the first immigration quota law.  He helped to draft the National Origin Quota System.  Three years later he founded a citizens committee to support and defend the system, known as the American Coalition of Patriotic Societies. 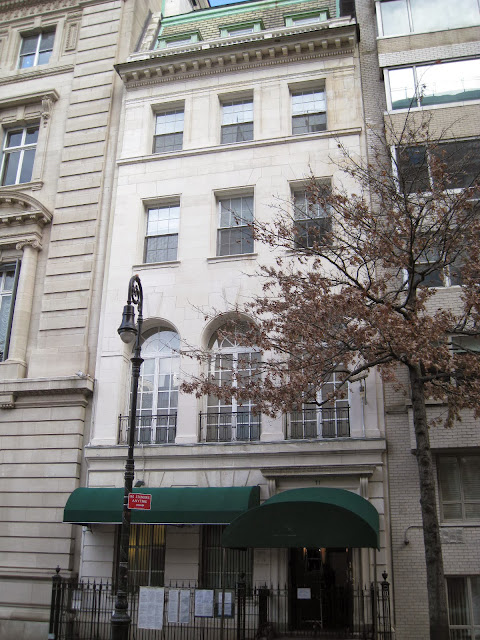 As the decades passed, Trevor’s focus turned to the Soviet threat.  As associate counsel of the Senate Foreign Relations Committee to investigate Russian propaganda, he unmasked a soviet agent who was functioning as an Ambassador and had him deported.

In an ironic twist, the Trevor mansion was purchased by the Soviet Government in 1978 as housing for its consulate staff.  Only a year later President Jimmy Carter froze the consulate program after the Soviets intervened in Afghanistan.  Along with the Hammond mansion next door, now the Soviet Consulate, John and Caroline Trevor’s handsome home was shuttered and dark for over two decades.

Today the Trevor mansion is part of the Consulate General of the Russian Federation in New York.  Other than dark green awnings installed at street level, matching those on the Hammond house, the restrained and elegant residence is unchanged since its was the newest of the "high-grade colony of fine houses."

contemporary photographs taken by the author
Posted by Tom Miller at 2:53 AM