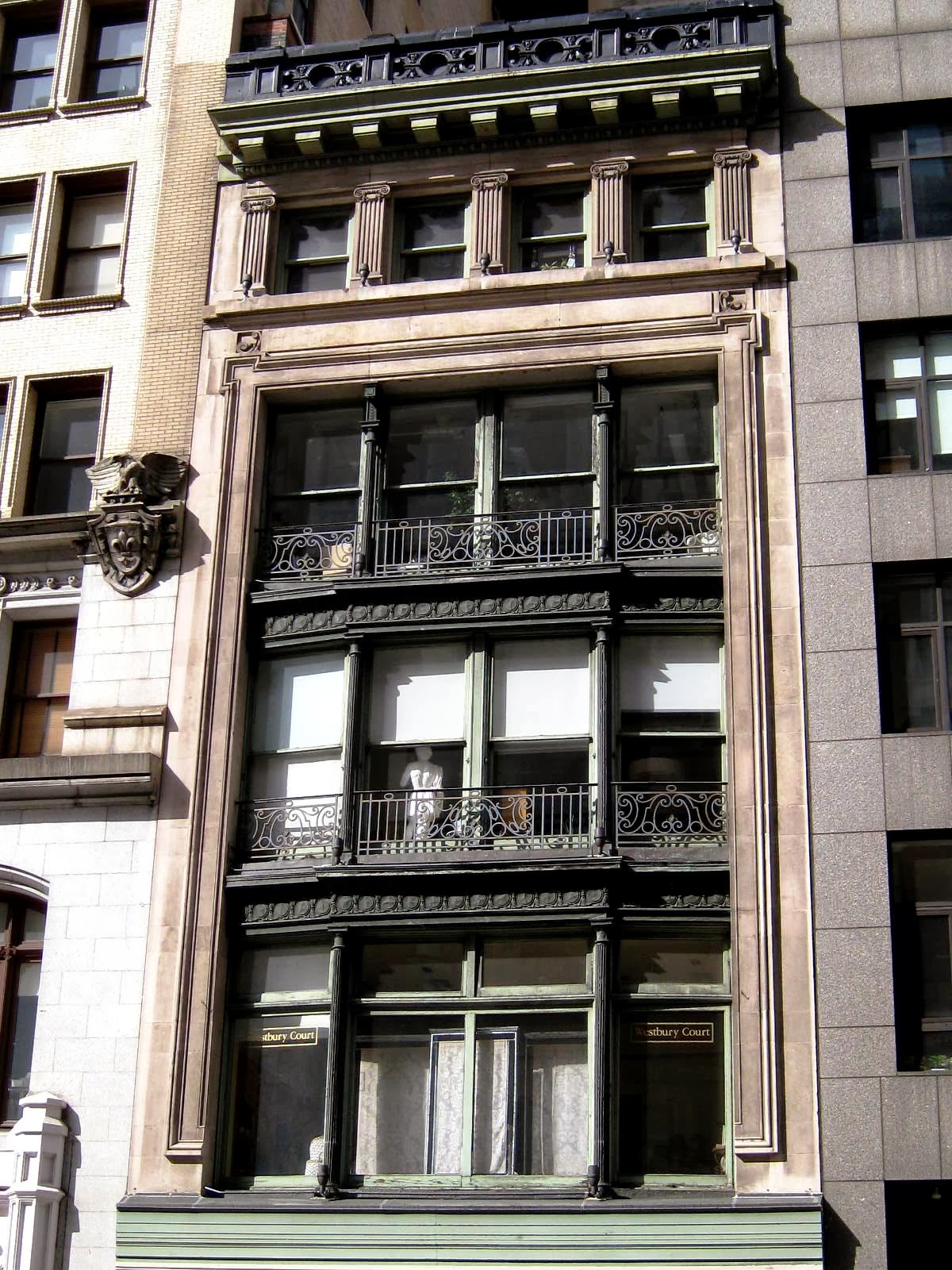 In 1858 the neighborhood around merchant William B. Putnam’s fine brownstone-fronted home at No. 222 Fifth Avenue was quietly residential.  Madison Square park had been completed over a decade earlier and Putnam’s neighbors were among Manhattan’s wealthiest and most respectable.  The house next door, at No. 220, had been built simultaneously and, while slightly narrower, was a near match.

Change soon came to Fifth Avenue above 23rd Street; and William Putnam’s residence would be a major part of it.  Little by little hotels, restaurants and clubs would wedge themselves into the elite neighborhood; one of the first being the Traveller’s Club.

Based on the London club of the same name, the Traveller’s was intended for the convenience of visiting foreigners as well as New Yorkers who frequently traveled.  Founded in 1865, it occupied a house at the corner of Fifth Avenue and 14th Street.  Then, three years later, it moved into the former Putnam residence.  According to James Grant Wilson in his 1893 The Memorial History of the City of New-York, “To enter the Travelers’ [sic] a member must have traveled extensively outside of the United States…It was in the days of its power a great resort for foreigners.  In the early years of the club the leading feature was a series of lectures given by eminent travelers, many of whose names were to be found in the list of honorary members; and when at No. 222 Fifth Avenue the club gave a brilliant entertainment to the Japanese Embassy, which attracted great attention at the time.”

Francis Gerry Fairfield focused on English members in his 1873 The Clubs of New York.  He described the clubhouse as “a leading resort for America-examining Englishmen, and the headquarters of an English coterie of considerable social importance.”  He admitted that the club had hosted impressive receptions and social functions but by 1873 “they have made an end of all that, having settled into a body as quiet as Mr. Mantilini expected to be after taking a bath in the Thames.”

The Traveller’s Club left in 1873 and the mansion was converted for business purposes.  The upper floors were retained as residential space, while the former parlor floor became home to Howard & Co. jewelers.  The invasion of a retail store, no matter how upscale, was cause for disgruntlement among the wealthy neighbors.  Decades later The Evening Post Record would recall (although getting the original retail tenant wrong) that “No. 222 is said to have been the first of the Fifth Avenue houses above Twenty-third Street leased for business purposes, having taken in the seventies by Annidown, the hatter, greatly to the annoyance of near-by residents.”

In fact, James Rufus Amidon lived upstairs at No. 222 and his hat store would open next door in No. 220 later on.  It was the jeweler Howard & Co. who upset the strictly-residential applecart.
Like all jewelers at the time, Joseph P. Howard’s elegant store offered more than merely jewelry.  Here ladies could shop for “real bronzes,” china and “fancy goods.”  A year after opening, the store offered a new and “beautiful assortment of Rich Dress Fans;” and just before Christmas in 1875 it advertised that the store would remain open “late Saturday Night” and that “we opened a beautiful assortment of Worcester and Copeland’s Porcelain, just arrived per steamer Russia.”

Howard & Co. left No. 222 by 1883 when Wood Gibson moved in.  Before doing so, however, changes were made for the high-end harness maker.  On September 1, 1883 The American Architect and Building News reported on “internal alterations” to Nos. 220 and 222 costing $4,000 for lessee Wood Gibson.

Wood Gibson’s grandfather, also named Wood Gibson, had established the firm in 1818.  By now it not only manufactured quality harnesses, saddles and other carriage and riding gear; it made high grade traveling trunks.  When the two houses were internally connected for Wood Gibson, a three-story factory was added in the rear.

In 1885 New York’s Great Industries said of Wood Gibson “The premises occupied are very commodious, and comprise a splendid salesroom…He makes a specialty of harness and travelling trunks, and in these lines his goods are unexcelled by those of any similar concern.”  Gibson not only manufactured his own goods, but heavily imported “fine London saddles, bridles, holly whips, bits, spurs, etc., which are offered at the lowest prices, compatible with good workmanship and materials.”

By now James Rufus Amidon’s hat store was sharing space with Gibson, and would do business from No 220 until at least 1888.

Among the moneyed residents in the upper floors at No. 222 at the time was Warren B. Smith.  The bachelor was a member of the exclusive Manhattan, New York, Riding, and Lawyers’ Clubs.  But in 1891 Smith got himself into trouble with Customs officials when he attempted to smuggle expensive goods into the country.  On June 2, 1891 under a headline reading “It Was Warren B. Smith,” The Sun reported “It was discovered yesterday that the $5,000 worth of gold tableware, diamond and other jewelry, and silk underclothing that was found in the trunk of a passenger on the Bremen steamer Lahn last Friday was the property of Warren B. Smith of 222 Fifth avenue.”

Smith had sloppily attempted to conceal the loot “in trousers’ legs and in the bottom of a trunk.”  His indefensible excuse was that he would have declared the articles (valued at about $125,000 in today’s money), but he “didn’t think the examination would be so strict.”

Sadly for Smith, the following week the United States Marshal auctioned off the long list of seized goods.

Fifteen years after opening his store here, Wood Gibson died in his summer home at Glen Ridge, New Jersey in August 1898 at the age of 67.  His obituary noted that “among his customers were many wealthy persons of this country and of Europe”

Upstairs the commodious apartments continued to be leased by well-to-do tenants, many of them bachelors.  On June 24 1900 The New York Times mentioned that “W. Marshall Fuller of 222 Fifth Avenue gave a musicale in his apartments on Monday evening.  Among the artists were Mrs. Horn, Lily d’Angelo-Berg, Mary Erver, and Ross David.  The apartment was decorated with white and pink carnations.”

In the meantime the Standard Art Galleries had moved into the retail space.  The firm advertised “household furniture, rare works of art and bric-a-brac.”  It would not stay long, however.  In January 1902 The Evening Post Record of Real Estate Sales reported that “The estate of Joseph C. Baldwin has leased No. 222 Fifth Avenue, a four-story dwelling.”

The new lessee was Joseph Fleischman, who also rented No. 220 on a separate lease.  The annual rent on the 21-year lease for No. 222 was a hefty $12,000.  It was announced that Fleischman “intends to combine the two buildings by making extensive alterations.”

Fleischman commissioned the architectural firm of Buchman & Fox to renovate the combined store space at Nos. 220 and 222 Fifth Avenue.  The architects replaced the rear addition of Gibson Wood and added an elevator.

As the alterations commenced, wealthy bachelor Stanton Guion was living upstairs.  The son of one of the owners of the Guion Steamship Line, Guion was an invalid and had been under the treatment of Dr. W. B. Clark, the family physician, for several years.

On the morning of April 21, 1902 the 45-year old was already intoxicated.  He picked up his razor and sliced his throat and wrist.  Oddly enough, he then “rang his bell for a negro attendant, whom he directed to send for a messenger,” The Times reported the following day.  When the servant saw the blood, he instead sent for Dr. Clark.

As he dressed the man’s wounds, Clark called for an ambulance from the New York Hospital.  However when Policeman Duffy saw the ambulance arrive and checked into the problem, he promptly arrested Guion for attempted suicide.

J. F. Douthitt, “a decorator and art dealer,” took the newly renovated first floor space and the rear extension.  The upper apartments were now leased by J. Ensign Fuller (most likely a relative of W. Marshall Fuller) and his sister; Mrs. Upperman and her daughter; an actress, Florence Lloyd; and three young artists; all on the second floor of the combined buildings.  On the third floor lived Mrs. Huntington and her sister (The Times pointed out that “Miss Huntington is a relative of the late Collis P. Huntington); and two unmarried women, Misses Penfield and Leiter (“Miss Leiter is a member of the Chicago family of that name,” said The Times).  Among the tenants on the top floor was Captain E. L. Zalinski, “inventor of the dynamite gun” and his nephew, S. L. Adler.”

Around 3:00 in the morning on April 10, 1903 a fire broke out in the rear extension.  Joseph Rodriguez, the elevator boy, first saw the flames and roused the janitor, William H. Harris.  By the time the firemen arrived, Harris had directed most of the tenants out of the building; but others were still inside.

On the top floor, Mrs. Higginson and her daughter were trying to capture their two Angora cats in a basket.  Policeman Duffy ordered them out; but the women refused to leave their pets.  The standoff ended with Duffy and two firemen corralling the animals.  At the same time Captain Zalinski refused to leave some of his gun models in the burning building.  Captain Farley of the fire department ended the argument by removing the inventory down the stairs.

Several of the female tenants swooned and had to be carried out by firemen.  When it was all over no one was seriously injured; however there was $70,000 damage to the recently renovated structure, most of which was in Douthitt’s gallery.  In addition to valuable paintings, he lost “many engravings, draperies, and tapestries.”

Douthitt left No. 222.  The combined buildings were now converted to retail space throughout.  L. P. Hollander & Co. moved in.  The firm offered women’s and children’s clothing to the carriage trade.  The store would stay only five years.  On February 10, 1909 it announced it would relocate to Nos. 550 and 552 Fifth Avenue where it planned a new 8-story building.

In 1911 Charles Josephson leased the store and basement here; but the Joseph C. Baldwin estate which still owned the building soon had larger plans.  The outdated brownstone front was obviously a remodeled home.  To attract new commercial tenants, a modern-looking structure was called for.

Architect John C. Westervelt stripped off the old façade and created an up-to-date limestone and cast iron façade.  The make-over was completed in 1912.  No longer connected to its neighbor, the resulting structure, was tasteful and inviting to modern commercial tenants. 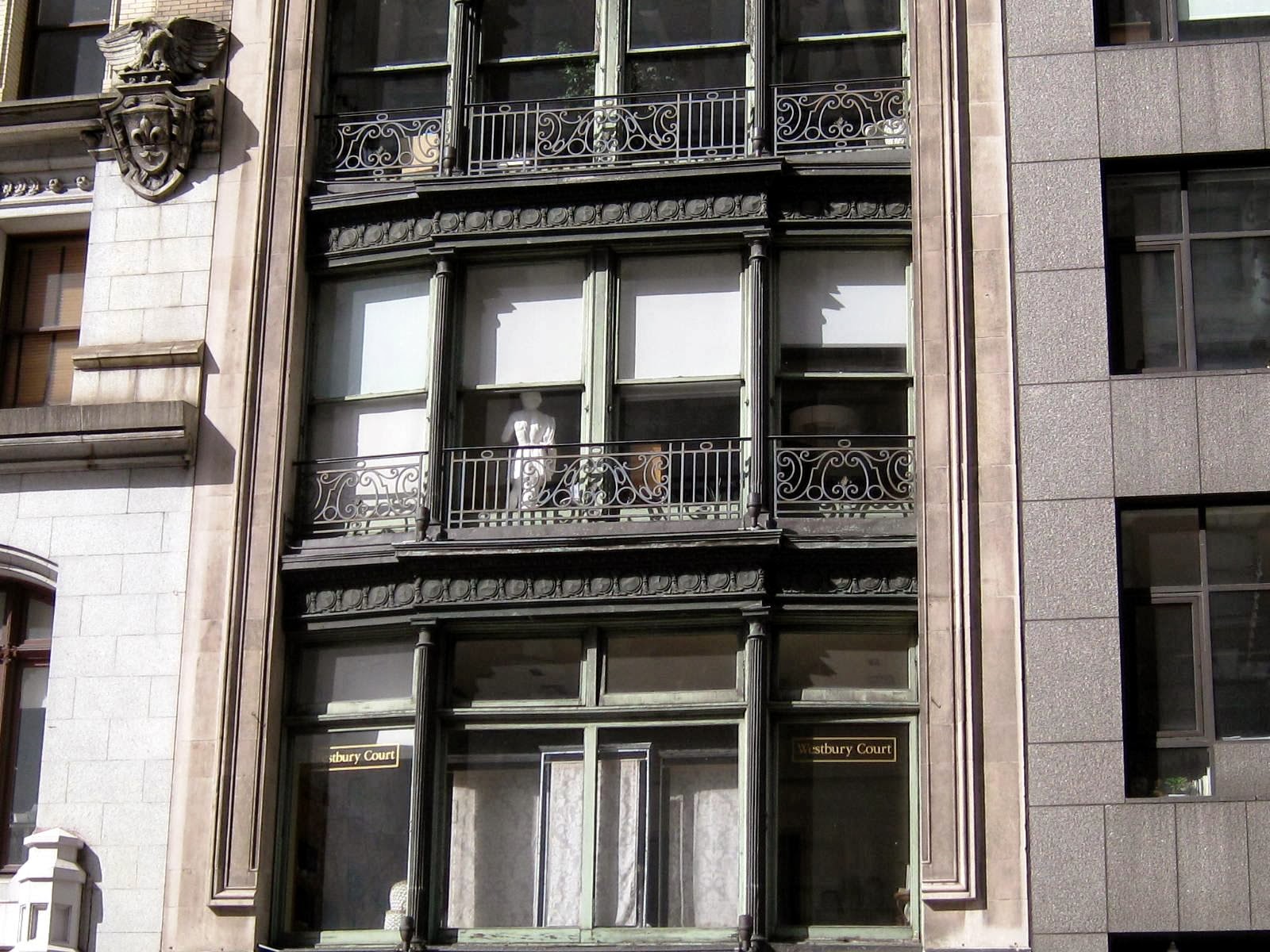 Throughout the first three decades of the century the building would house various tenants.  In 1936 it was called “Music Box Hall” and was headquarters to trade unions and labor organizations.  Later that year the entire building was leased by the Book Mart and the following year on January 15 Benjamin Duckman, “retailer of books, lamps, pictures and art goods,” leased the building.

Duckman apparently had a change of mind and two weeks later the building was leased to the Shapiro & Son company, manufacturers of curtains and bedspreads.  Only a week after Shapiro & Son moved in, the building was heavily damaged by fire.  On February 3, 1937 The New York Times reported “Four firemen were plunged into four feet of water when a section of flooring collapsed beneath them in a fire in the five-story loft building at 222 Fifth Avenue.”  The newspaper said “Firemen poured tons of water into the basement, after breaking through sidewalk lights with sledge hammers.”

Despite the catastrophe, Shapiro & Sons would still be in the building in 1966 when its president, Charles Shapiro, died at the age of 76.

In 1946, after owning the building for 88 years, the Joseph C. Baldwin Estate sold No. 222 for $110,000 to the Elk Supply Company.  The new owners immediately began a conversation which resulted in offices on each floor above the store level.  Along with Shapiro & Sons, the building would be home to a diverse mix of tenants including the Posner Advertising Agency in 1947; the Christian Anti-Communist Crusade in 1962; and ActBig.com, a start-up internet company in 2000. 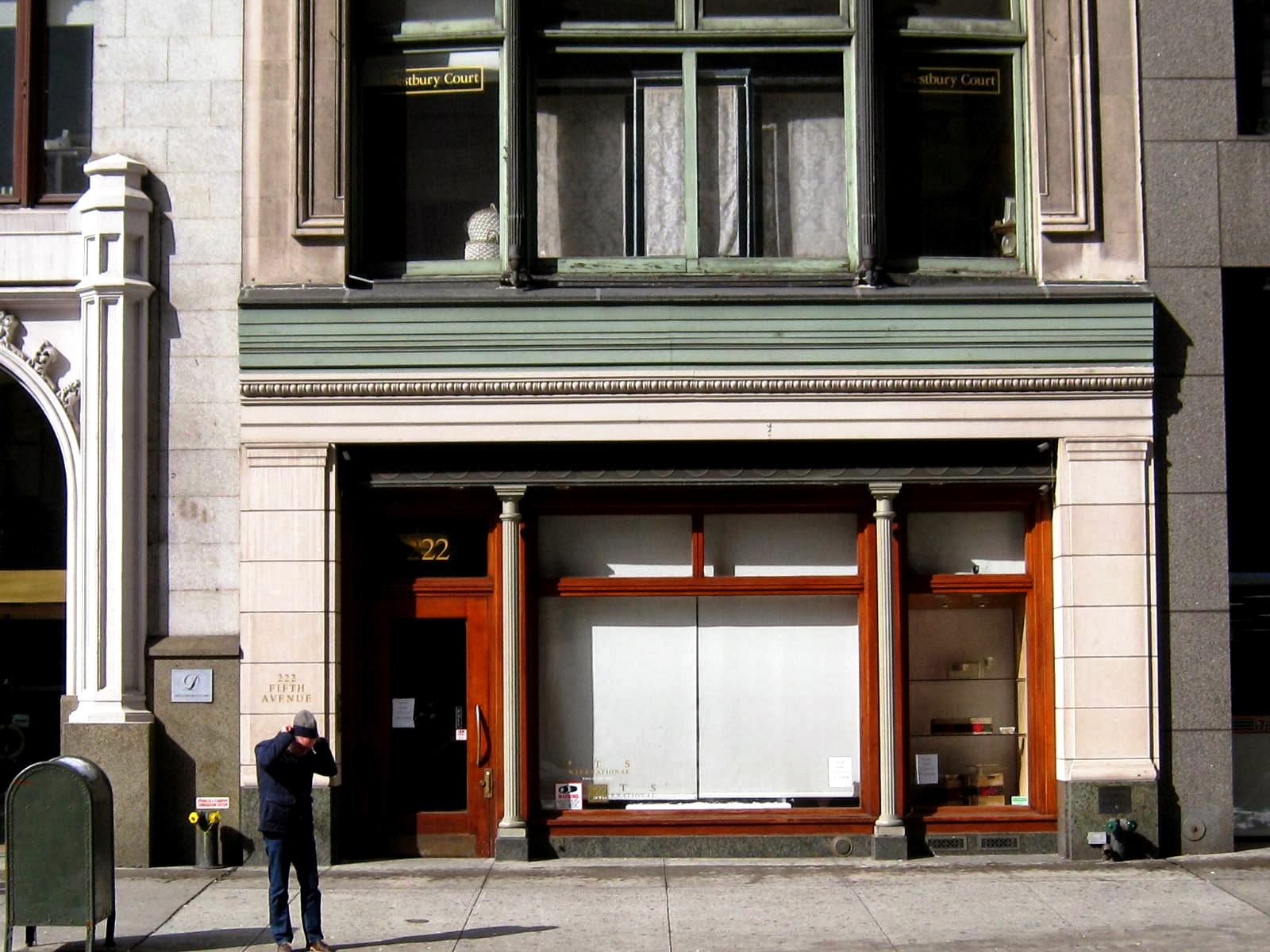