As Greenwich Village experienced a building boom in the 1820s and 1830s, speculative homes sprouted throughout the--until-recently--sleepy hamlet.  The two brick-faced Federal style houses at Nos. 509 and 511 Hudson Street were intended for merchant class families.  Slightly wider than normal, they rose two and a half stories with prim dormers punching through the roofs.  Recessed doorways were accessed by shallow brownstone stoops above English basements.  Decades later The New York Times would say that No. 509 was “once a dwelling of considerable pretension.”


In 1859 the owners of both homes were members of area volunteer firehouses.  Warren Chapman, Jr. lived in No. 509 and made his living as “a clerk.”  He was one of 30 firefighters stationed at the Empire Hose Company, No. 40 at No. 70 Barrow Street.  The Board of Aldermen that year pronounced the station “in bad condition and too small.”


Next door Samuel M. Thompson was a member of the Howard Engine Company No. 34 at No. 131-1/2 Christopher Street.  A man of leisure, he listed his occupation as “gentleman.”  His free time afforded him the ability to serve on the committee for the reception of Captain John Downey in 1862.  Captain Downey left Company No. 34 to answer the call to service in the Civil War.


During the Battle of Bull Run, Downey led his men forward, reportedly inspiring them with the cry of “Remember the New-York Fire Department.”  The fire captain was taken prisoner and held in Richmond for 13 months, “at times ill-treated by the chivalry of the South, again jeered by recusant friends of days gone by, now raised in spirits by the prospect of a speedy release, only again to be laughed at and sent further South to more inconvenient confinement, poorer fare, and more brutal treatment,” reported The Times.


When Captain Downey was finally released the various fire houses (the volunteer departments would not be abolished for another three years) came together to stage an impressive parade.  For its part in the receptions and ceremonies, Samuel Thompson’s firehouse pulled out all the stops.  The New York Times noted on August 25, 1862 “There will be an illumination in the neighborhood of Engine House No. 34, got up by the neighbors and friends of the company.”


Following the war, Eugenia Mayoreau lived in No. 509 during the 1870s.  She was a teacher in the Girls’ Department of Grammar School No. 3 a block away at No. 490 Hudson Street.  But change was coming to this stretch of Hudson Street.  The bustling riverfront docks gave rise to seedy saloons and cheap seamen hotels.  Hudson Street retained its respectability, but the days of the two houses as single-family homes were drawing to an end.


By 1890 Eugenia Mayoreau’s house had become the headquarters for the Tammany Hall’s Ninth District.  That year the Congressional convention of the district was held here.  The political group would meet in the house for two more years, moving on to No. 13 Abingdon Square in May of 1892.


No. 509 Hudson Street quickly was taken over by “Mother” Burdick, whom The New York Times referred to as “a sweet-faced woman in Hudson Street.”  Mrs. Burdick was the wife of a minister of the Society of Seventh-Day Baptists.  When he was transferred to New York City from Allegheny County, she confessed that “After I came here I had really nothing to do.  I fortunately met Miss E. B. Knox, who was doing work among seamen.  She has plenty of money, and does lots of good.”


The pair visited the sailors along the Hudson River docks, distributing reading materials.  “Finally we got to inviting them to our houses.  We used to have readings and concerts until there got to be so many that we could not accommodate them,” she explained to a reporter.  So when the Tammany club moved out of No. 509, she leased it for the use of the seamen.


Over the entrance door was a sign announcing “New Mizpah Reading Room for Seamen,” and inside the men found “the best magazines and other reading matter, leaving only a hearty ‘thank you’ in exchange.”   The Times described Mrs. Burdick’s arrangement.  “In the front parlor are reading tables and writing material and a very fair library.  In the back parlor are a piano and organ and chairs.”


Mrs. Burdick described her routine to a reporter.  “The first thing in the morning I go along the docks on West Street, and if the steamers are in I go right aboard to see the men and invite them to the rooms.  They know me on all the liners now and let me tack up my cards and see the men if any of them are sick or injured.


“That is why I felt so bad two days ago not to have my money.  There was a man who had a broken leg aboard one of the steamers, and I had been carrying him fruit every day, and the day before the steamer sailed.”  She was referring to the fact that donations from concerned citizens had been scarce lately.


“And then came the letters with the money.  I had four sick men on that one steamer to see each day in port.  I generally have from six to ten days at my men between trips.  We have something for the men here every afternoon and evening.  They can write letters and have music.  Tuesdays we have concerts.  The sailors sing songs, and we have some fine vocalists, too.  Each evening we have a short song service, but we do not mean to push religion at the men.  We want to make a home for them.”


Mrs. Burdick sent “reading bags” containing magazines and books with every ship that left port.  When the boats returned, the sailors brought back the empty bags.  In December, she sent Christmas bags with packages marked to be opened on Christmas Day.


In March 1893 Mother Burdick initiated a new activity for the men.  The New York Times announced “To-morrow night there is to be a candy pull.”


The kindly woman had large aspirations.  “Some day I hope to see this grow to a home for sailors such as does not exist here.  I wish to see a coffee house, lodging, and chapel—all for sailors, and all neat and clean,” she said.  Her hopes would not come to pass at No. 509 Hudson Street, however.


Within six months from the candy pull, Mrs. Burdick’s sailors’ haven was taken over by the Greenwich Wheelmen—one of the many popular bicycling clubs at the time when cycling was an immense fad.  A newspaper noted in August 1893 that “The Greenwich Wheelmen have largely increased their membership since they moved from Charles Street to their present commodious quarters in the large, old-fashioned house at 509 Hudson Street.  They have taken in twenty new members in the three weeks they have been in their new house, giving them a total membership of seventy, and they expect to take in five more at their next meeting.”


The group organized Sunday bicycle runs and tours as well as entertainments in their clubhouse.  On August 3 The New York Times reported that “The Greenwich Wheelmen will give a stag at their clubhouse, 509 Hudson Street, this evening, which will be the first of the season.  A musical and literary entertainment will be given by club talent.”


The event was the club's official housewarming and more than 300 “friends and neighbors” attended.  “An interesting musical and literary programme was given, consisting of banjo playing by the Empire City Quartette, cornet solos by John Mackay, humorous selections by ‘Josh’ Daily, violin solos by Prof. Harris Cox, musical specialties by Gilmroe brothers and the Silver Glee Club, songs by Bern brothers, A. T. Tierney, William Kramer, J. Merrill, and Adolph Michaud, and recitations by Tiddlewinks, the boy wonder,” reported The Times.


The newspaper noted that the house “was handsomely fitted up, and contains a large double parlor, a room for storing of wheels, training room, card room, Secretary’s room, etc.”  The Greenwich Wheelmen was one of the largest and most influential of the city’s cycling clubs and its membership rolls listed champions—like W. D. Outerbridge, “the champion of Bermuda.”

In the meantime, Dr. John P. Foland was living next door in No. 511.  A member of the Medical Society of the State of New York, he was also an officer of the General Committee of Tammany Hall in 1894.  Dr. Foland apparently rented out at least one room in the house.


One tenant, 25-year old Frank Murphy, was a truck driver.  On July 14, 1896 during an intense heat wave, Murphy was overcome by the heat while loading his truck at the Old Dominion Line Pier.  Hours later he was still unconscious at the Hudson Street Hospital late in the night.


The Foland family would remain in the house for years.  Dr. C. Foland was practicing from the house in December 1903 when he was called to the home of Joseph Conlin across the street at No. 496 Hudson.  When the doctor arrived, Conlin was near death.  His life insurance policy for $250 listed the beneficiary as his sister, Mrs. Arthur J. Dowling who lived nearby.


Oddly enough, one week later Mrs. Dowling’s husband began exhibiting the same symptoms as her deceased brother—severe pains in the stomach.  When his condition worsened, she gave him quinine and brandy; yet he deteriorated further.  A few minutes after Dr. Foland and Dr. Thomas O’Mara arrived at the Dowling home at No. 262 West 10th Street, the man died.


Mrs. Dowling was the beneficiary of her husband’s $500 insurance policy.  On January 4, 1904, the morning following his death, the New-York Tribune, reported “She was wondering if she could collect the money on that account.  They had three small children, and she said she needed the money badly.”


The newspaper called the coincidence of the two similar deaths a “mystery” and detectives agreed.  An investigation was initiated and the Tribune said “their report will be turned over to the Coroner.”


The Folands were apparently an old Greenwich Village family.  Following Dr. John P. Foland’s death, his executrix presented the nearby St. Luke’s Church with the original 1821 iron key from the church which had been in his collection.


Around 1908 No. 509 became the “undertaking rooms” of James Keenan.  The funeral parlor and undertaking operation would remain in the house at least through World War I.  By the early 1930s a commercial entrance was gouged into the basement level and within a decade the entire parlor floor wall would be converted to a shop window. 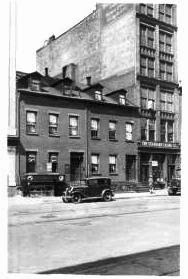 Then late in 1978 a project was initiated by the Recycling for Housing Partnership that would gut the old houses and combine them with the old loft building next door at Nos. 505-507.  The resulting 30 cooperative apartments were entered through a courtyard on West 10th Street.


Although any interior period detailing that had survived was now lost; the facades of Nos. 509 and 511 Hudson Street were nominally restored.  Perhaps understandably, there was no attempt to reproduce the English basements, the recessed doorways or stoops.  However the brutish commercial fronts were bricked in and sympathetic windows installed—a welcomed tradeoff for what could easily have been demolition of two steadfast survivors.