In 1862, when Manhattan’s exclusive gentlemen’s clubs buzzed with the talk of civil war, a new sort of club was established.  The Red Room Club was organized “for the promotion of literature and art, by establishing and maintaining a library, reading-room, and gallery of art, and by such other means as shall be expedient and proper for such purposes.”  There were already several literary and artistic clubs in the city; but this one required that its prospective members have something more than money.  They had to have a college diploma.   In 1865 the organization was incorporated as the University Club and a distinctive new genre of men’s club had been realized.


At the time, the Delta Psi fraternity, founded at Columbia University, was 19 years old.  Before long the Delta Psi Society was formed, a clandestine society of rites and mystery.  As the second half of the century progressed, the growing number of university-based clubs—among them the Princeton, Hamilton, Yale and Dartmouth Clubs—was supplemented by purely fraternity-related clubs.


Later, in 1893, James Grant Wilson in his The Memorial History of the City of New-York would explain “One peculiarity of these [fraternity-based] societies is that the number of resident and non-resident members is nearly equal, the out-of-town representation being perhaps the greater.  Members of the Greek-letter societies throughout the country join the clubs in the metropolis as a matter of pride, and these thus become the national headquarters of the fraternities.”-


According to the New-York Tribune, it was Delta Psi which was the first “of the Greek letter societies to establish in New-York a club which presents many of the features of the other social clubs in the city.”  James Grant Wilson described it as a “secret order.”


In 1879 the highly-regarded architect James Renwick, Jr. would design the Delta Psi Society’s clubhouse at No. 29 East 28th Street.  The organization chose the location well.  Just a block and a half from Fifth Avenue, the site was firmly in a neighborhood of fashionable residences.  The new clubhouse would replace the former home of the wealthy Simon DeWitt Bloodgood.


The completed clubhouse, clad in red and cream-colored brick with terra cotta trim, stood full three stories high over an English basement.  A mansard roofed fourth floor, tiled in slate, was punctuated by two cast metal dormers.  Bandcourses of terra cotta or brick separated the floors, and brick quoins ran up the sides and around the openings.  A dramatic cluster of three windows surmounted by a grand terra cotta arch created a focal point.  Between the third floor windows a shield was carved with the Greek letters of Delta Psi.


The expanse of windows at the second floor were there for architectural purposes only.  They were non-functional inside.  The Sun’s Guide to New York noted that “This is the oldest and probably the wealthiest of the college fraternity clubs in this city…Not only is membership restricted to members of the Delta Psi fraternity, but no non-member is even allowed to pass the threshold of the club-house.  The club rooms are on the first floor, and the windowless floor above is the chapter-room of the Columbia College chapter to the Delta Psi fraternity.”


The New-York Tribune side-stepped criticism and called the building “a house unique in appearance and in style of architecture.”   The Real Estate Record and Builders’ Guide was more direct.  Five years after the structure’s completion the Guide wrote that the Delta Psi lodge “is composed of red and yellow brick, and is not without good points of design.  But the color treatment is exactly and exquisitely wrong, the two colors being transposed, so that it is the negative of a much better building than itself.”


By 1889 the Delta Psi Society had renamed itself the St. Anthony Club.  On March 31 of that year the New-York Tribune reported on what little was known of the arcane interiors of the clubhouse.  “Those who are not permitted to wear the mystic St. Anthony cross, with its shield of blue enamel, its Hebrew letters and its skull and bones, know little of the interior of the heavily bolted club-house of Delta Psi.  Its members say that it contains many of the comforts and conveniences of an ordinary club, but that it lacks restaurant and dining-room facilities.  The large meeting-room is furnished in Egyptian style.  The lodge-rooms of the Columbia chapter of Delta Psi are in the building.  They are handsomely decorated in pure Egyptian from designs imported from Thebes.”


At the time of the Tribune’s report, the St. Anthony Club had about 300 members.  On the roster were some of the most prestigious names in Manhattan—Cyrus W. Field, Jr., Stuyvesant Fish, Nicholas Fish, Schuyler Hamilton, Jr., Mark Hopkins, Edward De Peyster Livingston, Valentine Mott, Gouverneur W. Morris, and  James W. Roosevelt among them.


By 1894 the St. Anthony Club had outgrown its 15-year old clubhouse.  On June 16 of that year the architectural firm of Heins & LaFarge submitted plans for “a three-story brick and stone extension.”  The rear addition cost the organization $15,000—around $400,000 today.


The secretive and high-toned club stayed out of the headlines—good or bad—for decades.  But in 1904 it was pulled into a shocking scandal that rocked New York society.  Wealthy wine merchant Frank de Peyster Hall had been a member since 1878.  He was President of the F. de Peyster Hall Company and lived nearby at No. 113 West 28th Street in what The Evening World called “luxurious surroundings.”   Hall held memberships in other exclusive men’s clubs including the New York Yacht and the Calumet Club.


The unmarried millionaire sometimes stayed overnight at the Calumet Club and nighttime activities resulted in his being asked to resign.  Like all men’s clubs, young boys were employed as bellboys to handle messages and tend to the incidental needs of the members.   When club officers heard of the “gossip of bellboys” the youths were questioned.  Club attendants said that “over a long period of time” the “boys were afraid to go to Hall’s room while he was living in the club.”


This led to an investigation by discreet private detectives.  A young detective was placed in the Calumet Club as a bellboy.  “On the strength of his evidence the manager of the detective agency, according to the club officials, went to Mr. Hall, handed him a resignation blank and asked him to fill it in,” reported The Evening World some months later.


The sensational facts of Hall's “disgraceful practices” were kept from the public and Hall’s resignation was reported to be due to his unhappiness with the way the club was managed.  But little by little rumors leaked out.  By September 1904 his business partners heard the story and he was forced to resign.  Several members of the Calumet were also members of the St. Anthony Club and the scandalous tale was repeated in the hushed halls of No. 29 East 28th Street.


On October 5, in an effort to control the “ostracism both socially and in business circles” he was enduring, Frank De Peyster Hall sued Alfred H. Bond, president of the Calumet Club, and George A. Carmack, secretary of the New York Yacht Club. Charging the men with slander, he sued each for $50,000.


Hall’s attempt to save face backfired.  As attorneys prepared their cases, newspapers were told that at least “seven witnesses, all of whom are boys” would testify.  To make matters worse, Bond sent a message to Hall’s lawyers saying, according to The Evening World, “that he desired no further publicity, but that if the suit were pressed he would lay the evidence in his possession before the District-Attorney, which the object of beginning criminal proceedings.”


Frank De Peyster Hall, once eminently successful and respected, had his back to the wall.  Pederasty in 1904 was not only a despicable crime; it was damning.  If his case went to trial, Hall would be shamed and ruined.


On October 10 The Evening World reported “It was Hall’s custom to take his breakfast in his room every morning at 8.45 o’clock.  Malvina Morse, the negro maid, took the breakfast to the room at the usual hour to-day.  The door was slightly ajar.  She knocked, but receiving no reply she entered.


“The sight that greeted her eyes caused her to drop the tray and rush into the passage with a scream of horror.  Hall was lying dead on the floor alongside the bed.  There was a bullet wound in his head and a pistol clasped in his right hand.”

The disgraced club member had taken the only way out he could conceive of.


After a quarter of a century in the clubhouse, the St. Anthony Association looked to move northward.  On July 4, 1912 the club purchased the mansion of Edith S. Logan, widow of John A. Logan, at No. 17 West 56th Street.  Edith Logan accepted the 28th Street clubhouse as partial payment.


With few alterations, Edith Logan converted the clubhouse to commercial space.  On May 27, 1915 The Times noted that she had leased the building to W. E. Morgan.  Two years later she was ready to sell.


On May 13, 1917 The Times said “the realty market closed yesterday with a few scattering sales, interesting among which was the sale of the old four-story and basement dwelling at 29 East Twenty-eighth Street.”  The newspaper reported that Edith Andrews Logan’s buyer “will make extensive alterations and occupy the structure for his own business.”


In 1921 the house was headquarters for a possibly naughty operation.  On July 2 that year an advertisement appeared in Publishers’ Weekly:  “WANTED—Salesmen, thoroughly acquainted with French publications.”


By the 1940s the building had been converted, informally, to apartments and it appears that in October 1940 a young artist who signed his name “M. Rothkowitz” first took an apartment here.   He would go on to be better known as Mark Rothko.


By 1945 the Federal World Government, Inc., a “non-profit membership organization,” had its headquarters in the building.  Also known as the World Federalists, USA, in September 1945 it released to the press a letter sent to President Truman.  The message, signed by former Supreme Court Justice Owen J. Roberts and 38 leaders in the business, labor, education, literary and education fields, stressed “the establishment of a democratic ‘world government’ as the best means of controlling the atomic bomb.”


The Federal World Government, Inc. would stay in the house for just one more year.  In June 1946 it purchased the brownstone house at No. 31 East 74th Street which it dubbed World Government House.”


When Theodore Stuart Weshner and his wife moved into their second floor apartment in the building in the 1950s, the brownstone stoop had probably already been removed.  Known familiarly as Skip, Weshner was a stereo enthusiast.  He installed 46 loudspeakers in his living room—the once-sedate space which in the 1880s was Delta Psi’s top secret meeting room.  But his obsession with musical purity went further.


Meyer Berger, reporting in The New York Times on November 18, 1956, “The quest for pure music from recordings has led men into odd designs and compelled them to the use of all manner of gadgetry, but Theodore Stuart Weshner…has opened a seemingly fantastic new approach.  He manipulates his living room walls.”


In the 12-foot high space Weshner installed pivoting seven-foot panels, one foot wide; thus creating false walls.  “One side of each board in this giant louver is surfaced with celotex, to act as an absorbent of speaker sound waves; that’s the front wall’s soft side,” explained Berger.  “If Skip wants to add brilliance to high-range notes from the speakers, he pivots all the boards so their hard, or painted sides, face into the room in an unbroken wall.  If he wants light, rather than music, he pivots the louver units so that they face end in.”


Today James Renwick’s late Victorian clubhouse, squashed between two soaring commercial towers, is a bit grimy.  A Chinese restaurant operates from the former English basement.  But the integrity of the design above shines through—“unique in appearance and in style of architecture.” 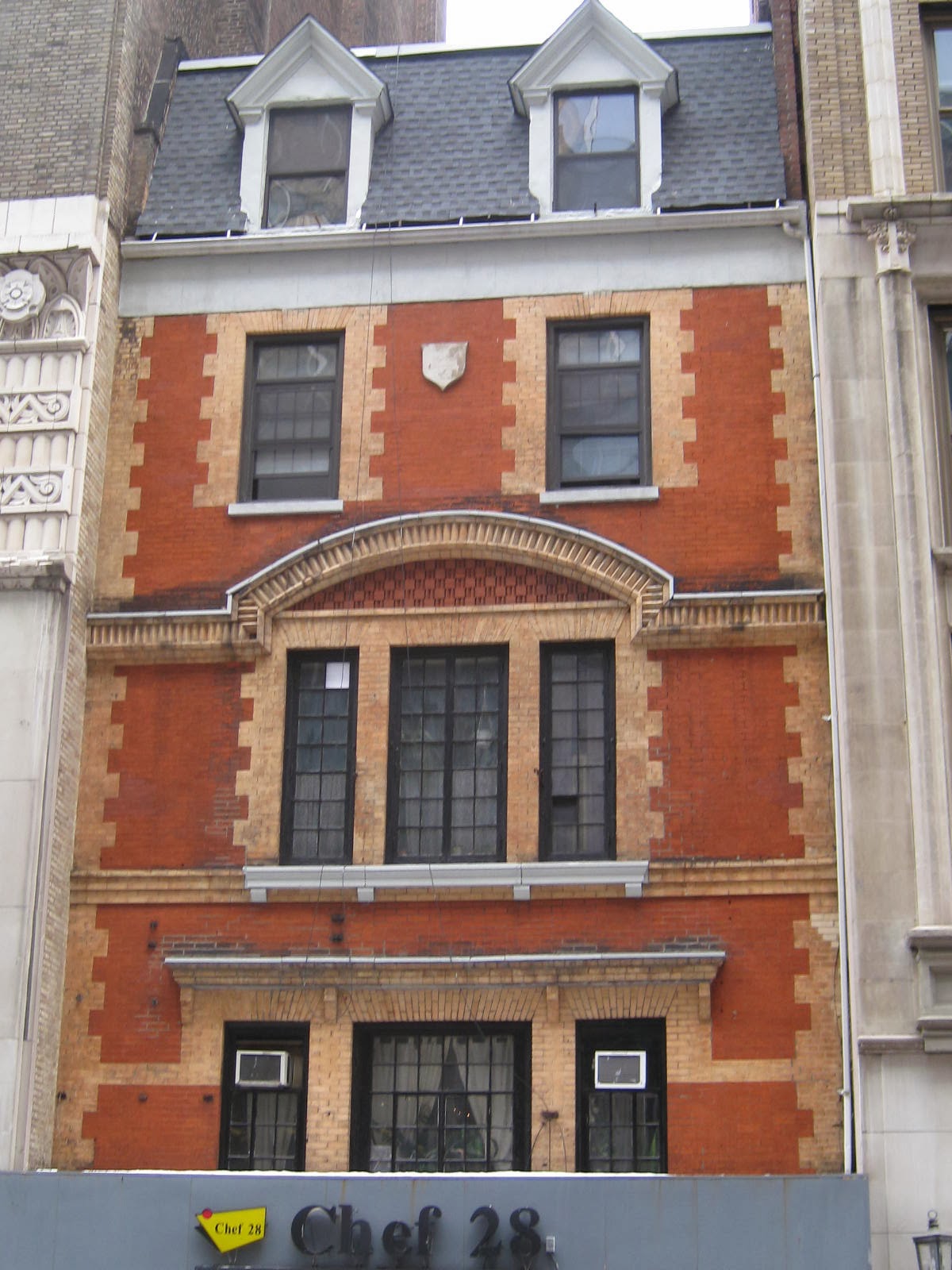