The Unique Stone House at No. 108 Waverly Place 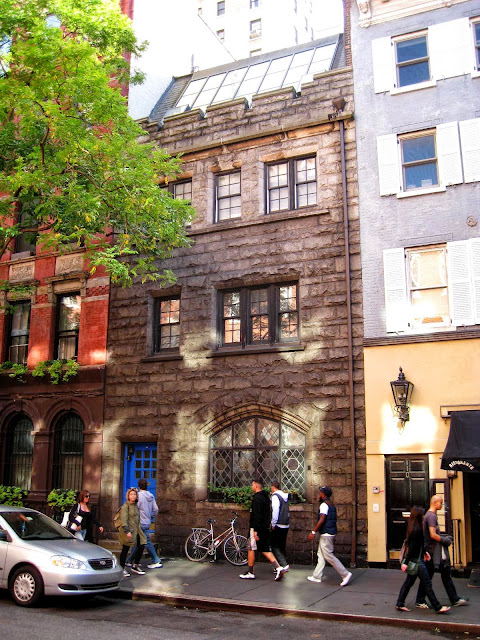 When Thomas R. Mercein, president of the New York Equitable Fire Insurance Company, commissioned the construction of nine rowhouses along Waverly Place in 1826, Greenwich Village was north of the established city.  Washington Square, nearby, was still a potter’s field and that same year Mayor Philip Hone came up with the idea to renovate the square into a military parade ground.  It would be two years before bachelor George P. Rogers began construction of his fine brick country home on the north side of the square.

Mercein’s row of speculative houses was designed in the expected Federal style.  Three stories tall with dormered attics, they were handsome brick homes with paneled lintels.

Among them was No. 108.  In the 1840s it was home to the Frederick Henry Wolcott family.  By now Washington Square was ringed with fashionable mansions and the Waverly Place block shared the respectability.   Wolcott was a partner with William G. Lambert, dealing in dry goods and acting as the New York agent for the cotton output of two of New England’s largest textile mills.

In December 1851 Wolcott, now 43 years old, announced his retirement, saying he now had “sufficient property to satisfy my desires.”  Before long Wolcott managed to settle his affairs and relocate his family to his country estate, Hurl Gate, on Long Island.

As the Civil War approached, the former Wolcott house became a boarding house, apparently solely for bachelors.  In 1860 Thomas Bond Raynolds, a student at Columbia College, was living here; as was Robert Augustus Stiles who had recently graduated from Yale.  Three years later Army surgeon C. Brueninghausen of the 119th Infantry listed No. 108 as his address.

Throughout the remainder of the century the house remained a respectable boarding house.  On November 22, 1891 The Sun advertised: “Waverly Place, 108, near Washington square—Select rooms, with board; American references required.”   It seems that the house continued to be run for upright bachelor tenants and in 1897 William John McAuliffe, a Second Lieutenant in the Infantry Section of the Officers’ Reserve Corps was living here.

The most celebrated resident of the boarding house was Richard Harding Davis.  Davis, who worked for The Sun at the time, was a journalist, author of fiction and drama, and was a war correspondent covering the Spanish American War.  The handsome writer is given credit for popularizing the disappearance of whiskers among men at the turn of the last century.

At the turn of the century the unmarried daughter of Dr. George Wilkes, Grace, lived alone in the elegant mansion at No. 16 Washington Square North.   The house had been purchased by her father around 1866.  The doctor moved his two daughters, his unmarried sister Ann, and his widowed sister Frances from their home on St. John’s Park.  One by one Grace’s relatives died, finally leaving her alone in the mansion.  A curator for the Metropolitan Museum of Art later said that she “lived solitary, like a Henry James heiress, in the Washington Square mansion.”

Many of the carriage houses and stables of Miss Wilkes’ immediate neighbors were located on MacDougal Alley, to the rear.  But by 1903 those buildings were being taken over by the new artist element in Greenwich Village which renovated the quaint structures into studios.  On June 26, 1903 The New York Times reported that “There is war in Macdougal Alley, for the sculptors there under the leadership of Bush-Brown have proposed that the name of the street be changed to Boticelli Court.”  The newspaper remarked that the old families of Washington Square (specifically mentioning Grace Wilkes) had fond memories of the stables.

“It is dear to them in the memory of the days when they visited the stables to talk with the coachmen and enjoy the freedom of life, where horses are the marvels of childhood, carriages splendid hiding places, and the lofts scenes of marvelous possibilities in the world of ‘lets pretend.’”

It was possibly the changes in MacDougal Alley that prompted Grace Wilkes to purchase No. 108 Waverly Place.  She commissioned architect Charles C. Haight to transform the old home into a carriage house and stable.  The resulting structure bore no resemblance to the old brick-faced Federal residence.  Haight gutted the house, installed carriage doors and a single entrance door, and faced the building with rough-cut stone.  Haight added a crenelated cornice that gave a castle-like feel to the utilitarian structure.  Above the street level were accommodations for Miss Wilkes’ driver or stable boys.

Whether Haight was responsible for the studio space at the topmost floor is unclear; but in 1917 artist Harriet W. Titlow had her studio in the sundrenched roof space.  That year she exhibited her work in the Grand Central Palace on Lexington Avenue at 46th Street, hosted by the Society of Independence Artists.

Grace Wilkes died in her Washington Square mansion on August 7, 1921.  The last of the Wilkes, her collection of art was bequeathed to the Metropolitan Museum of Art and she left the bulk of her fortune to charities.  Before long the carriage house on Waverly Place would be renovated.  In 1927 the building that the Department of Buildings had previously described as a “private garage and dwelling” with a studio above, was converted to a single family home.

A remarkably deft renovation resulted in the carriage doors being replaced with an expansive leaded glass window.  The space where Grace Wilkes’ horses had lived was now part of a handsome residence.  According to Lawrence J. Quirk in his “The Kennedys in Hollywood,” the remodeled building became home to actress Miriam Hopkins.  Here, he says, she was “particularly notorious for the wild parties.”

In 1933 Mrs. Stuart S. Furman rented the house.  Stuary Furman, a former partner in the investment firm of Kountze Brothers, had died the year before.  Mrs. Furman would remain in No. 108 for a decade.

When Michael J. Shagen purchased the building in 1944 the single family home had already been divided.  In reporting the sale The New York Times remarked that “Richard Harding Davis once lived in the house, which has been remodeled into two duplex apartments.”

Resident Marshall Winslow Stearns would change the course of the building in 1952.  The educator was professor of medieval English at Hunter College and a jazz historian.  The New York Times would say that he took “Chaucer and Louis Armstrong with equal seriousness.”  An associate said “He was one of the nation’s authorities on the subject of jazz.  While he brought to his work the techniques of a scholar, his writing was lively and colorful instead of being academic.”

Stearns founded the Institute of Jazz Studies in No. 108 in 1952.  Among a library of more than 12,000 recordings and memorabilia such as photographs of jazz greats, Stearns would also host jazz parties.  At one of the more memorable parties Dizzy Gillespie arrived with half of his band.  In the days before air conditioning, the windows were flung open and the music of Gillespie’s band blared out onto the street.  A neighbor called the police; but reportedly when they arrived and realized who was making the racket, they asked for autographs and had a glass of champagne, instead.

In September 1966 Stearns announced that the massive collection of the Institute of Jazz had been acquired by Rutgers University.  Called “the most extensive of its kind,” the archives included, according to The New York Times, “more than 90,000 recorded selections on disks, tapes, cylinders and piano rolls; every published book on jazz, except for a few obscure foreign works, as well as many unpublished manuscripts; files of jazz magazines in a variety of languages, photographs and clippings, a player piano, 25 antique phonographs (two in the shape of lamps) and such memorabilia as the saxophone played by Lester Young when he was with Count Basie’s band in 1936 and 1937.”

No. 108 Waverly became home to internationally-known photographer and tapestry artist, Jan Yoors, and his family.  The colorful Yoors had left his parents in Belgium at the age of 12 to join a gypsy tribe.  He acted as an Allied spy behind German lines during World War II and was arrested by the Gestapo in 1943.  Although condemned to death and held in solitary confinement for six months, he managed to escape and resume his activities.  He organized escape routes between Germany and Spain.

Yoors represented the United States at the International Biennale of Contemporary Tapestries in 1962 and 1965 in Switzerland, and in 1963 made a feature-length documentary film “Only One New York.”  On Thanksgiving Day 1977, the 55-year old artist suffered a heart attack in the house on Waverly Place.  He died the following week.

The stone house at No. 108 Waverly Place retains the two duplex apartments that The Times noted in 1944.  Its remarkable architecture is matched by the amazing personal histories of the artists, writers, and other residents who lived within its walls.

non-credited photographs taken by the author
Posted by Tom Miller at 3:26 AM