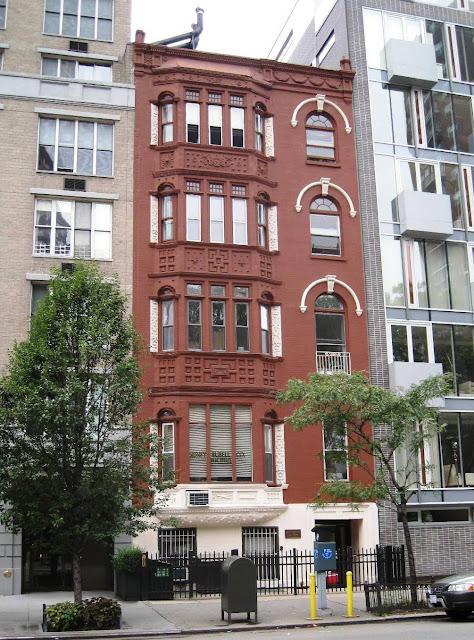 In the 1880s West 23rd Street between Eighth and Ninth Avenues had come a long way from the bucolic country estate of the Moore family, Chelsea.  Now a fashionable residential neighborhood, high-end brick and brownstone residences lined the thoroughfare.

But change was coming to West 23rd Street.  A new concept was just emerging for well-to-do families—the apartment house.  Termed “French flats” or simply flats to distinguish them from the crowded, unhealthy tenements, they were slowly gaining acceptance among a class accustomed to owning private homes.  In 1885 the owner of the 25-foot wide house at No. 348 West 23rd Street decided to alter and update the structure.

Around that same year a 24-year old engineer and architect returned from the mining towns of the West.  Charles Pierrepont Henry Gilbert would not officially begin practicing architecture in New York City for another year.  Once he did, he would become famous as C. P. H. Gilbert, the designer of some of the city’s grandest and most opulent mansions.  But for now he would alter the West 23rd Street house—one of his first commissions in New York open his return.

On June 27, 1885 The Real Estate Record and Guide briefly noted “Chas. P. H. Gilbert…is also the architect for altering No. 348 West Twenty-third street into a four-story ornate apartment house at a cost of $25,000.”  The cost of renovating the residence into apartments would translate into more than half a million dollars today.

Gilbert’s radical transformation was like nothing else on the block of staid rowhouses.  The architect turned to the newly-emerging Queen Anne style—the last word in architectural trends.  The house retained its steep stoop and English basement; but then all similarities to the old brownstone stopped.  Brick, stone and terra cotta joined forces to create a fanciful and vibrant façade.  The windows of the staircase hall were trimmed in a somewhat reserved arch and keystone and, most likely, contained stained glass.  The angled bay that rose the full four-floors, however, was less shy.  Gilbert embellished the slightly protruding bay with geometric shapes, sunbursts, carved stone panels and swags.  The various materials provided contrast in texture and color, most likely making No. 348 the star of the block upon its completion.

There were four commodious apartments—one per floor—that drew well-to-do residents.  In December 1897 the widowed John Frederick Hashagen married Maude Inglis Hollingsworth in the New York Avenue Methodist Church in Brooklyn.  Hashagen’s daughter, Florence, was the maid of honor.  The New York Times noted that “The couple will make their home at 348 West Twenty-third Street, this city.”  For years the Hashagens were mentioned in the society pages as they traveled to Europe on steamers, sharing the passenger list with names like Astor and Belmont.

At the time the building was owned by Benjamin F. Spink.  A jeweler, his store was located at No. 659 Sixth Avenue and he dabbled in real estate on the side.  On November 22, 1898 The New York Times reported that he sold “the five-story single flat” building to E. Holbrook Cushman.   The Cushman family had been major players in real estate development in Chelsea since the 1830s and lived nearby at No. 337 West 22nd Street.

The report of the transaction was, perhaps, confusing to readers considering that E. Holbrook Cushman had died three years earlier.

At the same time the building’s most notable resident was living here.  Clarence W Meade was, as The New York Times said, “one of the best-known men in the city.”  Born in “the neighborhood of old Chelsea Village” in 1842, he had earned his fortune as a dry goods merchant and a member of the Produce Exchange.    His political career began in 1870 when he was appointed Assistant United States Appraiser.  He held the position until 1890 when Governor Alonzo B. Cornell named him Port Warden; the same year that Mayor Hugh J Grant appointed him a Police Justice.

By 1897 Meade and his wife were living at No. 348 West 23rd Street.  Their married daughter lived a block to the east, at No. 226.  That year the positions of City Magistrates were created and Senator Thomas C. Platt urged Mayor Strong to appoint Meade to one of the seats.  The position earned Meade the enviable salary of $7,000 per year—about $163,000 today.

Meade’s wife was as interesting as he was.  Born in Boston in 1844, she was the daughter of actor Charles M. Walcot.  The Times said that Walcot, “in the time that Wallack’s Theatre was at its best, was one of the cleverest comedians on the stage.”   Wishing to provide his daughter the best education, he sent her to the Convent of the Sacred Heart, although she was a Protestant.  During the 1860s she was well-known for translating French dramas and comedies; most of which were then produced at Wallack’s and at the Garden Theatre.

While her husband made rulings on high-profile cases, Mrs. Meade collected art.  The New York Times mentioned that “the works of some of the best-known masters are to be found” in her home on West 23rd Street.

In April 1900 doctors gave Mrs. Meade a terrifying diagnosis: stomach cancer.  Emotionally devastated, she shut herself up in the apartment, rarely being seen outside of her home.  Six months later, at around 7:00 in the morning on November 3, she died in the apartment.  Her funeral was held here prior to her burial at Greenwood Cemetery.

Clarence Meade lived on in the apartment with his servants.  Two years later, on June 17, 1902, the first hints of medical problems appeared in The Evening World.  The newspaper noted that the judge was “ill at his home,” but the reports downplayed the severity of his condtion.  “It was said at the home of Magistrate Meade that the severe hot weather had brought on a return attack of diabetes, from which he has been a sufferer for about two years.  His doctor thought that with rest he would be soon around again.  Magistrate Meade, it was said, is not dangerously ill, and is improving.”

In fact, the 60-year old Meade had suffered a stroke.  Although he functioned mentally, he was paralyzed, and within the next four years he would suffer four more strokes.   The technicalities governing his appointment now presented a problem.  His position on the bench was irrevocable, even by the Mayor.  His seat could be made vacant only by resignation or death.  And Meade had no interest in either option.

It was impossible to hide Meade’s true condition for long.  It was apparent that he could not resume his duties; yet he steadfastly refused to step down.  Before long the other magistrates “who were forced to cover extra territory because of his absence,” as explained by The Times, protested to the State Legislature to have him removed.  But, as the newspaper said, “the protest availed nothing.”  The invalid Clarence Meade retained his position and continued drawing his hefty salary from his comfortable 23rd Street apartment.

Finally, a year before his term was set to expire, Clarence W. Meade died on July 16, 1906 in the bedroom where his wife had passed away six years earlier.  His death, while distressing, was also a relief to the other judges.  They scurried to find a replacement.  “When the news of Magistrate Meade’s death reached the police courts yesterday a special meeting of the Magistrates was held in the West Side Court,” reported The Times. 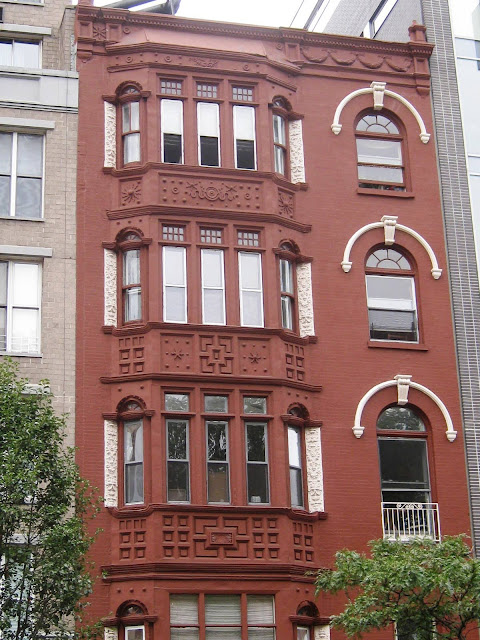 The estate of E. Holbrook Cushman would continue to own the building well into the 1920s as it continued to house high-end tenants.   Daniel A. Barker was one of them; a member of an old New York family.  For years, at a time when interest in historic preservation was focused mainly on battlefields and homes of political figures, he devoted time to the preservation of Chelsea landmarks.  Barker was a well-known dealer in antiques and he died of pneumonia in his home here on March 28, 1922.

Each of the venerable houses of West 23rd Street, including No. 348, received a lamentable renovation in 1929 when all the stoops were ordered removed for the planned widening of the street.  Rows of elegant brownstone stairways were hacked off in preparation for a street project that never happened.

With the removal of the stoop at No. 348, interior alterations were made as well.  The basement level, now the first floor, became a doctor’s office and apartment.  The homes on the floors above were dissected, doubling the number of apartments.

Dr. Martin Biederman took over the street level.  Biederman had graduated from Columbia University’s College of Physicians and Surgeons in 1922.  The apparently tireless doctor was on the attending staff of St. Clare’s, St. Elizabeth’s and Gouveneur Hospitals.  Like so many of the tenants before him, he was active in the Chelsea neighborhood; a member of the Chelsea Association and at one point a Commander of the Chelsea Post of the American Legion.

Dr. Biederman practiced from the office here, and lived in the adjoining apartment with his wife and two children, James and Ruth.  He continued to make a name for himself when he organized and ran the Hernia Clinic at St. Clare’s Hospital.   The 47-year old physician was taken to that hospital when he became ill in December 1944.  He died soon after on January 7, 1945.

Today the ground floor of C. P. H. Gilbert’s delightful Queen Anne makeover is still a commercial office and upstairs there are still two apartments per floor.  Unfortunately, the building was slathered in paint in the 20th century, disguising the purposeful contrast in materials.  A recent paint job attempted to pick out some of the detailing, but the busy facade silently pleads for a restoration.  The windows have been replaced, resulting in the loss of the stained glass panels.  Nevertheless, the structure survives as an unexpected and pleasant surprise somewhat squashed between two modern apartment buildings.

photographs taken by the author
Posted by Tom Miller at 3:32 AM