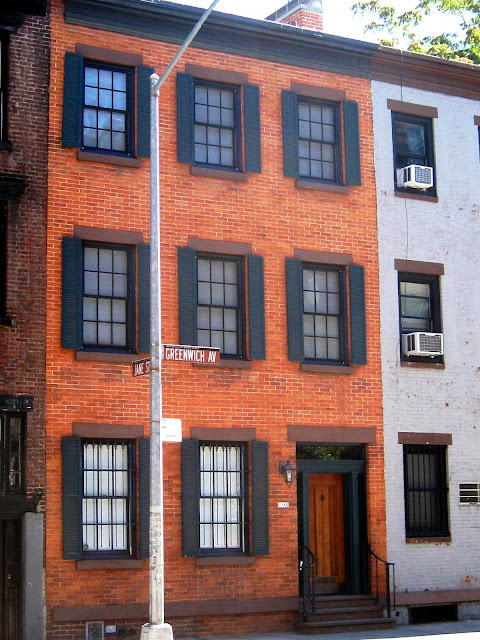 In 1836 Aaron Marsh and Henry M. Perine were busy as Greenwich Village boomed with construction projects.   Perine was a mason at No. 30 Carmine Street and Marsh was a builder who operated from 4th Street near Eighth Avenue.   With the population of the Village exploding, the pair built rows of speculative houses; having just completed a row of nine houses at Nos. 301 to 317 West 4th Street, near Marsh’s home.


This year they began construction on three matching Federal-style houses on Greenwich Avenue.  Carpenter Daniel H. Weed joined in this project and upon its completion in 1837 they divided the tax responsibilities—Marsh paid the taxes on No. 96, Perine on No. 98 and Weed took responsibility for No. 100.


Unlike their last row of houses on West 4th Street, these homes were not intended for upper-middle class families.    The modest brick-clad structures were two and a half stories tall with dormers.   Plain brownstone sills and lintels and shallow, three-stepped stoops were more functional than ornamental.  The less expensive and practical American bond brickwork was chosen in place of the attractive Flemish bond found in more costly houses.


Mary E. Tate was living in the house by 1842.  She was a teacher in the Girls’ Department of Grammar School No. 45 on West 24th Street between Seventh and Eighth Avenues.   Mary would not marry, focusing instead on education.    It appears that she rented at least one room in the house, for in 1859 John J. Hanly, a “metal roofer,” listed No. 100 as his address.  When Hanley was not busy roofing, he was one of 38 volunteer firefighters at National Engine Company No. 3 at No. 557 Hudson Street.


Outspoken on social and educational issues, Mary rose to the position of principal of the school and was called by the New-York Tribune on February 18, 1889 “one of the best-known teachers of the city” and added “Her school for more than two years has ranked among the first.”


By the time the Tribune praised Mary Tate she was no longer at No. 100 Greenwich Avenue, after having lived at least three decades here.   In 1878 the house was home to the family of Ernest B. Stavey.  Like Mary Tate, the Staveys would be here for decades.


In 1836, the same year that construction had begun on the house, the 18th Street Methodist Episcopal Church opened its doors.  Three years later 10-year old Ernest B. Stavey entered the church with his parents.  He would be a loyal member throughout his lifetime, serving as a Sunday School teacher, Assistant Superintendent of the school, and as Treasurer and Secretary at different times.


The Stavey family included Ernest’s wife, Caroline, and daughters Emma and Carrie.   The entire family was listed as members of the church and on November 19, 1911 when it celebrated its 75th Anniversary, The New York Times noted that “In the congregation was Ernest B. Stavey, who joined the church seventy-one years ago, and who has the distinction of being the oldest member.”


It was most likely during the Stavey occupancy that all three of the old houses gained a full upper floor.   A unifying cornice tied them together visually, and brownstone lintels and sills, matching the originals below, were sympathetically added.


Following the Staveys, in the 1920s, Edward N. Bunce was in the house.   The retired general manager of the periodical Christian Work, he suffered a near-tragic accident on August 7, 1926.  As Bunce was attempting to board a subway car at a downtown station that Saturday night, the door closed on his foot.  Bunce was dragged along the platform for some distance before the train stopped.  He was confined to the Knickerbocker Hospital with a crushed ankle and scalp wounds.


As the middle of the century neared, many of the small houses that survived on Greenwich Avenue were converted for business purposes.   In 1938 No. 100 became home to the newly-formed Greenwich Village Humane League, an organization founded by Alice Manchester to give advice to pet owners, find homes for stray animals and bring attention to threatened animals.   One method of creating public awareness was through prizes and awards.


On September  23, 1941 The Times reported that “Down at 100 Greenwich Avenue, headquarters of the Greenwich Village Humane League, two dozen boys and girls received recognition for prize-winning essays on mongrel dogs they had saved from an evil fate.”


Two months later on “Cat Day,” radio singer Margaret Speaks awarded gilded medals to school children for “the best letters sent to ‘Orphan Annie,’ the league’s mascot, on the ‘Life of my Cat.’”


The Humane League moved out on December 11, 1942.  Four years later, in January 1946, Daniel Brener returned from the Army and World War II.  The New York Times reported that he “has resumed his realty activity with the purchase of the three-story dwelling which has been altered into small apartments at 100 Greenwich Avenue.”  At the time of the sale the house was assessed at $17,000—about $150,000 in today’s dollars.


Only a year later Brener sold the house.  There were five apartments in the house—two each on the first and second floors and one on the third.   While some of the other old houses on the block were severely altered with show windows and commercial shop fronts gouged into the sidewalk level; No. 100 retained its residential appearance.


In 1976 the house underwent another conversion.  Apartments remained on the upper floors, but the first story was renovated into what the Department of Buildings called an “office.”  The Culinary Center of New York moved in.  It would offer cooking classes here for at least two decades.


Rather unexpectedly, in 2003 the house was reconverted to a single-family residence.   In 2005 it became home to actress Milla Jovovich, star of “The Fifth Element,” who paid $6.38 million for the once-modest home of a spinster school teacher.   If any of the 1837 interior detailing had survived, it was nowhere to be found.
Jovovich, the wife of director Paul W. S. Anderson, relisted the house in 2008 for $8.75, then took it off the market in 2010 at a reduced price of $7.5 million.   Finally in January 2013 the house was sold to Imax Corporation CEO Rich Gelfond after rocker Courtney Love lost in her attempt to lease the property (the advertised rent was $20,000 per month).


While the interiors of No. 100 Greenwich Avenue show off modern trappings and celebrity residents, the exterior retains the essence of its 1830s charm.