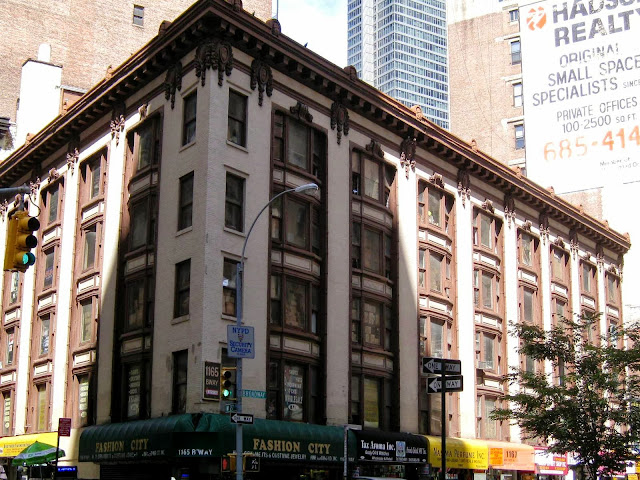 When Madison Square Park opened on May 10, 1847, the surrounding area was still mostly undeveloped.  Madison Cottage, a roadhouse on the corner of Fifth Avenue and 23rd Street, was the last stop for travelers heading northward out of the city.  Before long, however, the park was encircled by elegant brick and brownstone homes and both Fifth Avenue and Broadway saw the rise of luxurious hotels.


In 1867 Danish-born merchant Peter Gilsey and hotelier Robert Coleman commissioned architect Charles Mellon to design and build a five-story hotel at the northwest corner of Broadway and 27th Street.    The resulting brick structure stretched half the block along Broadway from No. 1161 to 1175.   Run by Coleman, it opened as the Coleman House.  The respectable hotel received not only transient guests, but permanent residents as well, like the wealthy and retired merchant Edward J. Warren who lived here in 1872.


A year earlier Coleman had sold his share of the hotel.  Now Peter Gilsey was in the process of opening his lavish Gilsey House hotel a few blocks north on Broadway.   In 1873 James A. Jewell took over the proprietorship of the Coleman House, leasing it from Gilsey; just as the Financial Panic of 1873 set in.


In September 1877 the Peter Gilsey’s heirs decided to lower the $25,000 annual rent on the hotel-- a formidable half million dollars by today’s standards.   The move was prompted by the “financial embarrassment of the proprietors” of the hotel, according to The New York Times.  John Gilsey attempted to put a positive spin on the situation, saying he thought “that many of the other hotel proprietors in this City are suffering from financial embarrassment.”   A month later Jewell stepped down and a new lease was signed by James H. Rodgers, who would run the Coleman House for years.


Hotels by their very nature attracted scandal, suicides and thievery and the Coleman House was no exception.  One of the most lurid scandals took place on April 3, 1879.


Washington Nathan was the son of wealthy stockbroker Benjamin Nathan.  Handsome and dashing, he had no interest in business; instead he drank and haunted the city’s brothels.    In 1874 he had met an attractive prostitute and madam, Birdie Bell, when she rented a brothel from Fannie Ellinger.  The New York Times said “Up to this time Nathan had been devoted in his attentions to the Ellinger woman, but he at once transferred his affections to Birdie.”


Nathan had little money of his own—his father overtly disapproving of his son’s lifestyle.   And so Birdie liberally supported him.  But then upon the death of his mother he came into his own money.   No longer needing Birdie, he turned his attention to the actress Miss Alice Harrison.


Alice’s virtue was not beyond reproach, and late in March 1879 when she took a parlor and bedroom at the Coleman House, she had many male guests.  “It was noticed that her callers were numerous, but, being an actress, nothing was thought about it by the hotel people, as it was presumed she would naturally have more business engagements than ordinary ladies usually have,” explained The Times.


Around noon on April 3 a well-dressed woman arrived at the hotel, registering as “Miss Zuland and maid,” from Philadelphia.  She insisted on a first floor parlor and bedroom—the same floor as Alice Harrison.  Once in her room, she positioned a chair at the slightly-opened door so she could see down the hallway.  She had not waited long before Nathan Washington knocked on the door No. 15—the suite of Alice Harrison.


Miss Zuland—in fact Birdie Bell—stormed down the hall and into Alice’s rooms.  “Without pausing, she turned the door-knob, pushed open the door, and, walking in, raised her right hand, in which she held a pistol, and fired two shots in rapid succession, both straight as possible at the head of Mr. Nathan,” reported The Times.


James H. Rodgers rushed to the scene.  Alice Harrison had taken cover in the servants’ dining room, Nathan Washington had fled, and “Miss Zuland” was back in her own room pacing back and forth.  Within 20 minutes, although she wanted to stay for a bit, Rodgers had tossed her unceremoniously out of the hotel “and within 15 minutes afterward Miss Harrison went also.”


Washington Nathan was not fatally injured, although the bullet stayed in his head.  The newspapers covered the story for days, printing every garish detail about Nathan’s dalliances and the sordid lives of both women.


The hotel was the scene of prize fight negotiations for champions like James J. Corbett and Peter Jackson in the 1890s; but by the turn of the century the many Broadway hotels in the area were being razed or converted to apartments or business buildings.  And so it was for the venerable Coleman House.   In 1906 the architectural firm of Maynicke & Franke was given the task of converting the hotel into a business building.   The transformation was completed a year later—a combination of cast iron, brick and terra cotta that resulted in an eye-catching commercial Beaux Arts building.   Three-sided cast iron bays rose four stories above street level to cast ornaments of festoons and scrolls.  The design was mean to be nothing more than it was—a loft and office building—yet it was cleanly handsome. 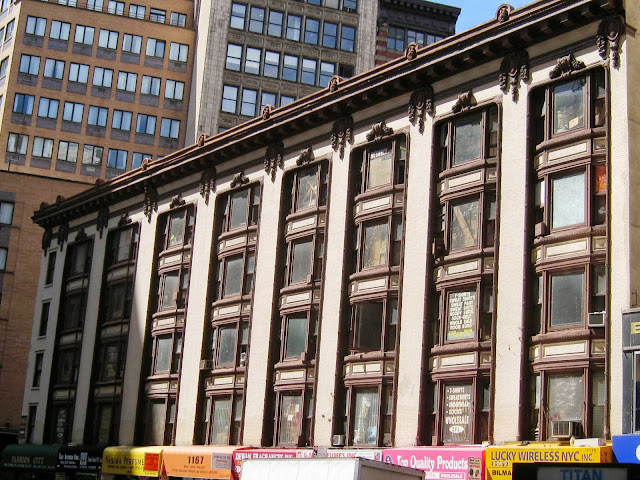 The ground floor contained upscale shops like menswear retailer Burnham & Phillips.  On March 24, 1907 the New-York Tribune insisted that “That man must be hard indeed to satisfy who cannot find in the assortment of goods offered by Burnham & Phillips…something to satisfy him in fashion, fit and fabric, for both spring and summer wear.”


A wide variety of tenants moved in upstairs, including the National Gramophone Company.  The early motion picture firm’s movies used the innovative Cameraphone, a hybrid motion picture projector and gramophone.  Films were produced here in the company’s “gallery.”


Another early tenant was the M. B. Foster Electric Co., contractors for electric light and power systems.  Among its projects the firm installed the electrical systems to the Singer Tower Building, the Lambs Club and the National Arts Club Studio Building.  Also in the building was the Ward Motor Vehicle Company, sellers of electric automobiles, and the salesrooms of the Cahill Iron Works, manufacturers of sinks and tubs.


In 1909 The International Remedy Co. was doing business in the building.  The firm promised cures for asthma, hay fever, catarrh, and bronchitis with its Toxico; and a cure for skin infections, blackheads, pimples and “itching and running eczema" with Tarsen.  Customers could also purchase Anti-Fat from the firm which advertised in 1909 “It will be joyful news to thousands of fat people to hear that they can reduce their weight from three to six pounds a week and turn ill health into robust health, and relieve that feeling of fullness and oppression and produce healthy digestion.”


Another menswear shop was in the building in 1916.  That year Matthews Modern Clothing Shop was sued by the Rogers-Peet, another widely-known haberdashery.  The Rogers-Peet firm originated a waterproofed Scotch woolen fabric which it trademarked as “Scotch Mist.”   It was not happy to find articles marketed as Scotch Mist in the Matthews shop.  The judge agreed with Rogers-Peet.


As unexpected as the Cameraphone or the miraculous cures of the International Remedy Co. was the mechanical dish washer for the home developed by the Dietz Mfg. Co.   The firm was in the building on March 25, 1917 when the New-York Tribune printed a large article about the convenience and performance of appliance.  “The problem of the mechanical dish washer for domestic use has been solved.  This sounds like a large claim, but what the average housekeeper is looking for is just a small and comparatively inexpensive dish washer that will do its work with less bother than is required to wash the dishes in the old-fashioned way, instead of more.  And this new automatic dish washer, which runs by water power, is IT.”


The Nu-Way Automatic Dish Washer was a metal cylinder in which plates, cups, and silverware were placed.  A hose connected the contraption to the kitchen faucet.  Hot water passed through a compartment containing a regular bar of kitchen soap, then forced two spray arms to rotate.  Water drained as quickly from the bottom as the water entered the top.  With a turn of a knob the water by-passed the soap container, so the dishes were rinsed with clear, clean water.  The appliance sold for $28.50—about $300 today.


By the 1920s many of the tenants were apparel-related firms.   Matthews was still operating its clothing store on ground level, along with Sonners & Levine who sold dresses and women’s wear.  Upstairs in Room 404 was the office of J. Hamberger, makers of “ready-to-wear basement cloaks, suits, dresses, and furs.”  The Artcraft Button Company; Redlich & Siegel, manufacturers of children’s dresses and coats; and Metro Silk Mills were all in the building.


Harry Landres began business here in 1924 as the L. & L. Overall Company.   His operation was a bit more shady than the others in the building.  He and four partners ordered and received merchandise for six months until creditors began wondering where their payments were.  “The minute the merchandise was received,” reported The Times on April 24, 1925, “it was sold to the Branford Sales Company of Newark N.J., at 30 to 40 percent below cost.  The money was pocketed by the defendants.”


A decade later, as the Nazi Party grew in power, the American Society for Race Tolerance opened its offices here.  The organization sent a telegram on August 28, 1937 to Secretary of State Cordell Hull urging withdrawal of US diplomatic representation at the National Socialist party convention in Nuremberg scheduled for September.


The telegram said in part “In view of the avowed medieval and vicious doctrines promulgated by the Nazi government party, any official participation or representation by the United States Government may be misconstrued as endorsement of these Nazi policies.”


The building continued to attract a wide variety of tenants throughout the 20th century, including electrical contracting firms, wholesale apparel companies and novelty wholesalers.   Although the street level—where both women and men once shopped for the latest in fashion—has been chopped into garish small shops with the flavor of a carnival midway; the upper stories of the renovated hotel looks much as it did in 1907. 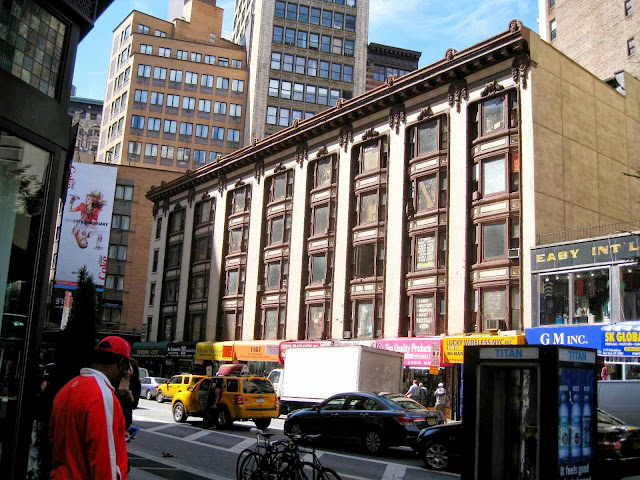