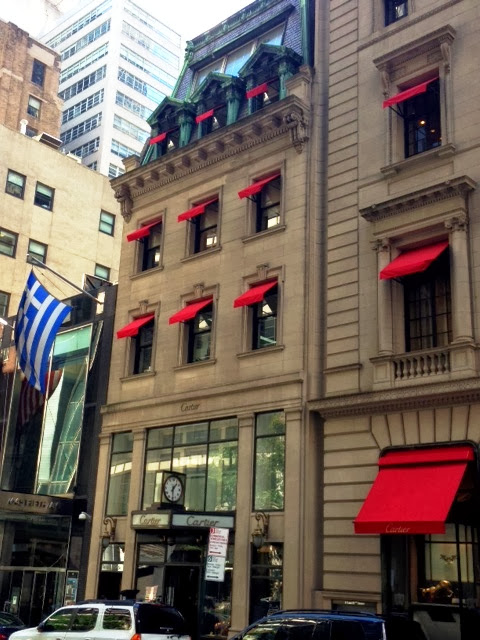 In 1845 Archbishop John Hughes pleaded his case before the city fathers, seeking land on which to build an orphan asylum.  The Roman Catholic Benevolent Society’s facility at Prince and Mott Streets was overcrowded and inadequate as more and more Catholic foundlings were brought to the Sisters of Charity.  The nuns and the Archbishop knew only too well that if Roman Catholic waifs were admitted into a Protestant orphanage they would be lost to the faith.

The city offered the block of land far north of the developed city, on the still unpaved Fifth Avenue between 51st and 52nd Streets, stretching back to Madison Avenue.  The church would pay the city one dollar per year rent, with the caveat that the property would be used to house orphans.  The deed was signed on August 1, 1846 and the new asylum was completed in 1851.  At the time, aside from the block-wide property of St. Luke’s Hospital between 54th and 55th Streets, there were only one or two homes or shops in the neighborhood.

In 1853 Hughes would commission James Renwick, Jr. to work on his ambitious St. Patrick’s Cathedral project that filled the block across the street to the south.  By the time the cathedral was completed in 1879, the neighborhood had drastically changed.  The homes of Manhattan’s wealthiest citizens were inching closer up the avenue

When St. Luke’s Hospital was razed in 1896, Fifth Avenue around the asylum was the most exclusive residential district in the city.  The value of the land had soared.  As was the case with the hospital, relocating the orphanage and selling the land made financial sense.  In 1897 the church began discussion of moving the orphanage and two years later construction of new buildings began in the Bronx.  In 1900 building lots on the old asylum land became available.

The lucrative possibilities of the choice real estate did not escape Edward Holbrook.  The president of the Gorham Manufacturing Company lived in Stamford, Connecticut.  He, therefore, perhaps underestimated the passion with which the millionaires in the surrounding mansions detested the threat of commercial intrusion.  He would soon be informed.

On June 5, 1900 The Evening Post Record of Real Estate Sales in Greater New York reported that “The two lots on Fifty-second Street of the Orphan Asylum property which were bought by Worthington Whitehouse for a client were sold by him to Edward Holbrook.”  The lots were Nos. 6 and 8, and Holbrook had big plans.

Neighbors like the Vanderbilts and Rockefellers were already infuriated over John Jacob Astor’s St. Regis Hotel—construction of which had just begun on Fifth Avenue at 55th Street.  Evidently someone had a talk with Holbrook, for a few months later he changed his mind.  The New York Times reported on May 28, 1901 “Plans were filed yesterday by Architect C. P. H. Gilbert for the two dwellings to be erected at 6 and 8 East Fifty-second Street…at a cost of $114,000.”  Rather than the 14-story apartment building, Gilbert would produce two limestone-clad six-story mansions.

The silver executive apparently was pleased with Gilbert’s designs, and in November 1903 he began work on his own mansion next door, at No. 4 East 52nd.  Again he turned to C. P. H. Gilbert for the design and plans were filed for a six-story house.  The New York Times reported it would be “wholly of fireproof construction” and the New-York Tribune added “The front is to be of dark blue Indiana limestone…The building will cost about $95,000.”  The cost of construction in today’s dollars would be about $2 million.


Construction would take over two years to complete.  In 1905 the Real Estate Record and Builders’ Guide commented on the progress.  “Exterior complete.  Windows and doors in.  Interior work under way.”  As the Holbrook residence rose, it was overshadowed by the magnificent Morton Plant mansion nearing completion next door—a palatial Italian Renaissance palace that diminished Gilbert’s handsome design.

Holbrook moved into the new house with his wife, Frances, and daughter Lillian.  In turn-of-the-century New York there was no surer way to garner the envy of other socialites than to marry one’s daughter to European nobility.  Frances Holbrook’s social coup came soon after when Lillian married Count Guillame de Balincourt in the new mansion on January 3, 1906.

The New-York Tribune could not resist mentioning that “The count is a Catholic and the bride a Protestant.”  The new countess and her husband sailed off to France, to live in Paris. 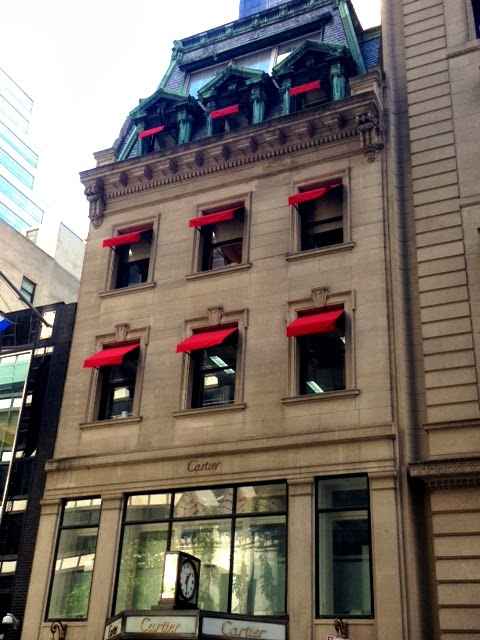 Edward and Frances would not remain in the mansion long after the wedding.  In June 1907 he sold the 30-foot wide house and a month later curious neighbors would discover the identity of the buyer.  The Times reported “James B. Duke, President of the Tobacco Trust, was the purchaser of the new dwelling at 4 East Fifty-second Street, the sale of which was announced in The Times about a month ago.  At the time the name of the purchaser was not known, and since then there has been much speculation as to the future home of the tobacco magnate and his future bride.”

The newspaper went on saying “It has long been current gossip that the social ambitions of the President of the Tobacco Trust and his bride-elect, Mrs. William Inman of Atlanta, would lead them to settle in close proximity to Fifth Avenue.  A week ago it was reported that Mr. Duke would purchase the home of the late Henry H. Cook, at Seventy-eighth Street and Fifth Avenue, and that he would occupy it with his bride on their return in the Fall from the tour of Europe they expect to make on their honeymoon this Summer.”
James paid $300,000 for the mansion—fully three times what it cost Holbrook to build.  He and his bride, Nanaline, would not be in the house long, however.  As The Times predicted, Duke did buy the old Henry Cook house.  He had it demolished and in 1909, while his new mansion was being erected the newlyweds moved into his brother’s splendid home at No. 1009 Fifth Avenue.

No. 4 East 52nd Street became home to Harry James Luce and his family.  Luce was the president of the Acker, Merrall & Condit Company of New York, one of the oldest grocery firms in the city.  He was also the president of the candy firm of Henry Maillard, Inc., and a director of Faber, Coe & Gregg, Inc.  The well-connected millionaire was a member of the best clubs—the Metropolitan, New York Yacht and Knollwood Country Clubs among them.

Like the Holbrooks, Harry and his wife, the former Katherine H. Moxley, had a daughter.  December 1914 was a busy time in the house as Margaret Payne Luce was introduced to society.  On December 6 The Times reported that “Mrs. Harry J. Luce of 4 East Fifty-second Street is to give the second dinner for her daughter, Miss Margaret J. Luce, on Thursday.”

Like many society girls, Margaret answered the call to help her country with the outbreak of World War I.  She joined the canteen service of the Y. M. C. A. and was sent to Nice, France in 1918.  War relief turned to romance when Margaret met the dashing (and wealthy) U. S. Navy Lieutenant-Commander Hamilton Vose Brian.  In March 1919 Harry and Katherine announced their daughter’s engagement.  With the armistice signed and the war over, they traveled to Paris in July 1919 for the wedding which took place in the Church of the Holy Trinity there.

It would be three years before the Luces would see their daughter again.  She and her husband arrived in New York on the Olympic for a visit on May 10, 1922 after being stationed in Constantinople and Tifilu.  Margaret would come home to a much-changed neighborhood.

The Morton Plant mansion next door was now the home of Cartier Jeweler.  The white marble mansion around the corner at No. 647 had been converted to the art dealership of Gimpel & Wildenstein.  Commerce was taking over the old residential district.

Five years later the Luce mansion would fall to the trend.  Cartier, Inc. purchased the house in 1927 and Harry and Katherine moved to the nearby Gotham Hotel.  Pierre Cartier converted the mansion to L’Alliance de Francaise de New York—a school offering classes in French and French literature.  Dr. Leon Vallas, a professor of the Sorbonne, was brought in to direct the school.  The school shared the mansion with the French Chamber of Commerce.  It was here, in 1935, that Pierre Cartier was elected its president. 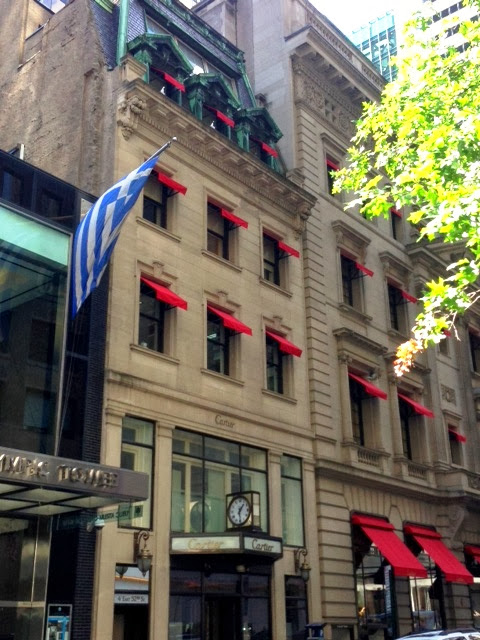 The French Chamber of Commerce would remain in the house through the war years.  In 2000 Cartier did a renovation of both the Holbrook and the Plant mansions.  The two buildings were internally connected, making No. 4 an extension of the retail store.  While the first two floors of the Holbrook mansion have been extensively altered for commercial use, the upper floors retain the integrity of C. P. H. Gilbert’s handsome design.  And as it was in 1905, the mansion is still overpowered by Morton Plant’s monumental house next door.

photographs taken by the author
Posted by Tom Miller at 2:54 AM