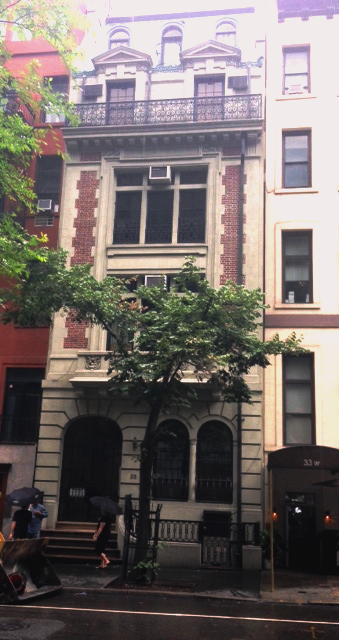 When 10-year old Walter Tower Rosen came to the United States in 1885 from his native Berlin, the block of West 54th Street between Fifth and Sixth Avenues was only partially developed.   John D. Rockefeller was settling into the old mansion he purchased at No. 4 on the south side of the street; while half of the block on the northern side was taken up by the sprawling 1867 St. Luke’s Hospital.


Behind the Hospital the western portion of the block was lined with nearly-identical brownstone rowhouses built shortly after the Civil War.  While respectable and comfortable; they paled in comparison to the lavish mansions that were appearing down the block on Fifth Avenue.


Among these was No. 35, a four-story house sitting high above an English basement.  The Italianate home was the pinnacle of taste in residential architecture when built.  As the 19th century faded, it was home to wealthy businessman Edward Scheitlin, member of the firm Edward Scheitlin & Co.    The company imported hosiery and gloves.


Only a month after Scheitlin’s death in the house on February 9, 1902 it was purchased by Frank V. Bertram.  The Bertram family quickly resold it in November the following year.


By now the 54th street block was dramatically changing.  In 1896 demolition of the old hospital  suddenly made building lots available in the most exclusive of New York neighborhoods.  That half of the block now saw rapid development as the modern mansions of prominent bankers and physicians rose in stark contrast to the brownstones of a generation earlier.


No. 35 became the home of the esteemed pediatrician, Dr. Allan M. Thomas.  Along with Dr. William C. Denning, Thomas had headed the maternity ward of the State Emigrant Hospital on Ward’s Island.  The doctors co-designed a three-foot by three-foot “hatching cradle" in 1888—the precursor of today’s incubator.  Warmed by fifteen gallons of water, it was first used for the tiny 2-pound, 7-ounce Edith Eleanor McLean who was born on September 7 of that year.

The new mansions down the block prompted Dr. Thomas to give his residence a much-needed a make-over.  The facade was stripped off and replace with an up-to-date brick and limestone Beaux Arts front that held its own among the fashionable newcomers.


By 1907 the block was being called the “Rockefeller Block” and was fully developed with fine mansions.  The artwork, jewelry and silver inside them were tempting loot for sneak thieves.  For several days in early April the residents were terrified by robberies and attempted break-ins.   Burglars made off with $7,000 in jewelry from the home of Dr. Moses Allen Starr down the block at No. 5.  And in the early hours of April 14 a thief would visit the Thomas house.


The family and the doctor’s household staff were all asleep around 1:30 a.m. when a maid, Christina Gustavson, was awakened by the sound of her window being opened. “She saw a main swing himself in from a rope ladder hung from the roof,” reported The New York Times the following day. “The man held a small electric lamp in his hand. When he saw that she was awake, she said, he whispered to her: ‘If you make the slightest noise I’ll kill you.’”


When the burglar heard movement below the stairs, he slipped back out the window and up the ladder. The terrified maid shrieked for help.


Dr. Thomas was irate and readied himself for action.  The New York Times reported “Detectives Beeron and Baer went to the doctor’s house.  They found Dr. Thomas and his butler, both armed with revolvers, in a very angry state of mind.”

The doctor and his wife, the former Anna O’Neill, lived in the house until 1916 when it was sold to attorney Ferdinand S. Crosley.   Crosley bought the property on behalf of “a client” who paid cash.  Although the house was assessed at $95,000, the asking price was “well over $100,000,” according to The New York Times—about $1.5 million today.  The newspaper commented that “This is one of the modern houses in the block.”


The buyer was Walter Tower Rosen.  The little boy who had come to the United States with his parents 31 years ago had graduated from Harvard in 1901—the youngest in his class—and immediately joined the international banking firm of Ladenburg, Thalmann and Company.  Rosen was a lawyer as well as a banker; and an exceptionally fine pianist.


During his Harvard years, his playing was noticed by the widowed Mrs. Jack Gardener who invited him to practice at Fenway Court—her museum that was yet to be opened.  Perhaps it was here, surrounded by the masterpieces of what would be known as Isabella Stewart Gardener Museum, that Rosen acquired his passion for art and collecting.


In 1914 Rosen had married the beautiful Lucie Bigelow Dodge, another musician.  The artistic list of well-wishers at the time included Rosen’s good friend Pablo Casals.  The Rosens had a son, Walter Bigelow, born in 1915 and another child, Anne Bigelow Rosen, would be born in 1917.


The Rosens traveled extensively, amassing an substantial art collection.  Entertainments in the Rosen townhouse most often included music, often with the hosts as soloists, and No. 35 West 54th Street was familiar nationwide among musicians and music lovers.


In 1929 Lucie suggested to her husband that “a little place in the country” would be nice.  There the family could escape the hot New York City summers.   The "little place" took ten years to complete and in 1939 the sprawling Caramoor—now a museum and home to the annual Caramoor Music Festival—became the Rosens’ main home.


While Caramoor was being constructed outside of Katonah, New York, Lucie was coming into her own as an accomplished musician of an unusual instrument.   She became entranced with the aetherphone/etherhone, a somewhat bizarre electronic musical instrument developed by Russian inventor Leon Theremin.  Theremin patented the device in 1928.  The instrument was controlled by the player without any physical contact.  Although it is now known mainly for eerie music like the soundtracks for Spellbound, The Lost Weekend, and The Day the Earth Stood Still, it was originally intended as a concert instrument for avant-garde 20th century music.


Lucie became a virtuoso on the instrument that became generally known as the teremin.   In 1930 she was part of a 10-person ensemble that performed on the stage of Carnegie Hall with Leon Theremin (the inventor had been in the United States in 1927).


Shortly after the Carnegie Hall concert they offered the struggling Russian inventor a room in their home at a low rent.


On August 1, 1936 Walter and Lucie announced Anne’s engagement.  Perhaps not surprisingly, there was a musical connection.  The Times gushed on about Anne’s pedigree—“granddaughter of the Hon. Mrs. Lionel Guest of Ferring, England, and of Charles Stuart Dodge of this city, and a great-granddaughter of John Bigelow, American Minister to France under President Lincoln.  She is a niece of Colonel John Bigelow Dodge of London, or Mrs. Maurice Magre of Paris and of Felix Rosen of New York.”


Anne’s fiancé was Janos Scholz of Sopron-Oedenburg, Hungary.  While he was the eldest son of the late Major Julian Scholz of the Royal Hungarian Artillery, The Times noted that he “is best known in Europe and this country as the cellist of the Roth Quartet of Budapest.  His family for generations has included distinguished military officers and musicians, and his grandmother was a friend of Franz Schubert, who dedicated one of his compositions to her.”


When the couple was married in St. George’s Church on Stuyvesant Square the following January, the ceremony was followed by a reception in the 54th Street house.


In 1938 Walter Rosen came to the aid of Leon Theremin one last time.  The same year that The New York Times said “Lucie Bigelow Rosen continues to serve as a high priestess of the electrical instrument that Theremin developed and that bears his name,” the inventor needed money to return to Russia.  Rosen struck a deal.  He paid Theremin $10,000 to create a new machine for Lucie, along with all the schematics and rights to produce more “for personal use only.”


Music was uncharacteristically not part of a gathering in the Rosen townhouse in January 1941.  With the war raging in Europe and England, the British explorer and writer Mrs. Rosita Forbes was briefly a house guest on her way to the Bahamas.  There Mrs. Forbes owned a plantation and “will engage in the production of food on Eleutheria Island…and has obtained charge of three others for the same purpose,” explained The Times.


On January 19 it was not a group of socialites or art and music lovers who assembled at No. 35; but members of the press.   They came to hear of conditions in London, despite the weary writer’s having just disembarked from a 14-day voyage from Liverpool to Halifax on a 3,000-ton cargo ship.


Rosita Forbes described conditions for the British in the most positive light.  “The whole standard of life is completely changed.  Money can’t buy anything anymore.  Health is better because everybody walks—driving is impossible at night—and cocktails hardly exist anymore.  Pleasures are much simpler, and there is much more family life.”


The terrors of World War II would soon reach the Rosen house.  Walter Bigelow Rosen left to fight for the Allied Forces, becoming a flying officer with the Royal Air Force.  He was killed in action in 1944.   His father established a foundation in his memory, to which Caramoor would eventually belong, “as a Center for Music and the Arts for the Town of Bedford and the State of New York.”  Lucie established a chair professorship in music at Harvard in his memory.


Walter Tower Rosen died on October 16, 1951, still active as a senior partner of Ladenburg, Thalmann and Company.  Lucie Bigelow Rosen lived on in the house and at Caramoor until November 27, 1968.  She died in the 54th Street house at the age of 78. 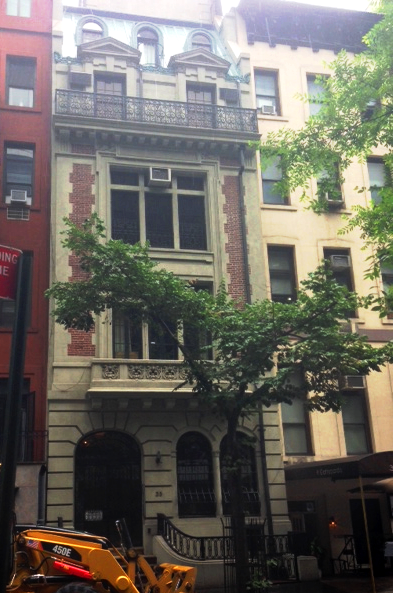 In 1977 the mansion was converted to apartments.  Little on the outside has changed since it was updated just after the turn of the century.   It stands as an elegant reminder of the first phase of development of the stretch of 54th Street that become known as the Rockefeller Block.

photographs taken by the author (sorry!  it was raining!)