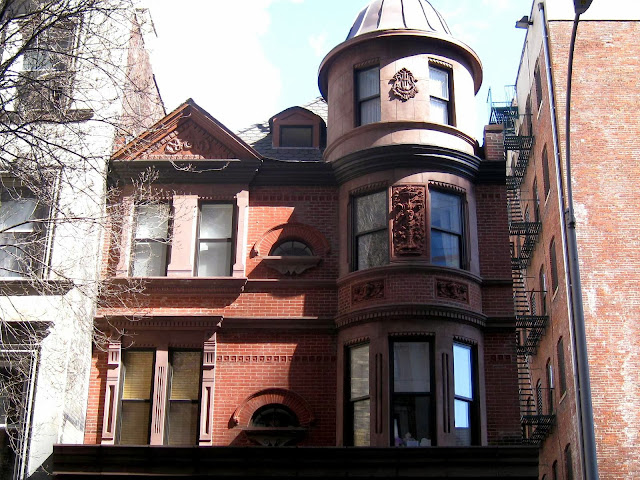 In the last quarter of the 19th century, architects filled the rapidly developing Upper West Side with delightfully fanciful structures.  Distinctly unlike any other part of the city, the streets in this section became a visual banquet of with turrets and towers, gargoyles and stained glass.  French townhouses sat side-by-side with medieval manors.  Here more than anywhere else in the city the architects exercised the freedom to experiment and test the latest styles.


In 1889 a three-story beauty was completed at No. 233 West 100th Street, just steps from The Boulevard (later renamed Broadway).  A city take on a suburban Queen Anne house, it boasted the capricious details that made the style so popular among Victorian homeowners—a bowed bay that morphed into a turret, half-moon windows filled with stained glass, creative brickwork, and decorative terra cotta panels.  A brownstone stoop led to the parlor floor above the English basement.  All that was missing from this urban version was a wrap-around porch with intricate woodwork.


Two years after the house was completed, Clara Barton’s American National Red Cross Association founded the New-York Red Cross Hospital Association.  According to President Mrs. Charles H. Raymond, “The work of the hospital is to train nurses for indoor and outdoor work, no regular price being asked.”


An appeal for contributions for a hospital and training facility building went out and in 1894 enough money had been raised.   That year, in April, The New York Times reported on the auction sale of the 25-foot wide house at No. 233 West 100th Street; the new Hospital and Training School for the Red Cross Sisters.


In 1896 the Annual Report of the State Board of Charities noted the extended work being done in the building.  Along with the training of nurses, it listed as its objects “to treat disease on most scientifically based methods, in particular without alcoholic stimulants, and to cultivate anything in medicine or surgery which may be of public interest or advantage.”


When the doors to the hospital first opened, Bettina Hofker was its sister-in-chief.  Among the original staff was Dr. A. Monae Lesser, the surgeon-in-chief.  Lesser was noted as “an advocate of surgery and the practice of medicine without the use of alcohol, and he has contributed articles to medical journals on these subjects,” said The Sun on August 8, 1897.


The close working relationship between Sister Hofker and Dr. Lesser fostered a more personal attachment and on August 6, 1897 the pair was married in the hospital by Rev. Dr. McNichol of the Fourth Avenue Methodist Episcopal Church.   Among those witnessing the ceremony were Clara Barton, and Stephen Barton and his wife.


The New York Times noted that “The wedding ceremony was very simple and followed a meeting of the Board of Trustees.  The President of the board, William T. Wardwell, gave away the bride, into whose purse the bridgegroom, following an old Manx custom, dropped a coin after the ceremony.”  (William Wardwell was not only President of the Board, but Treasurer of the Standard Oil Company.)


The newlyweds would soon take a trip to Cuba—but it was no honeymoon.  Rumblings of war with Spain resulted in a build-up of troops in Cuba.  In February 1898 Clara Barton sent Lesser and his wife there to vaccinate nurses and to prepare them “to be ready to start for the front on a moment’s notice.”


The New York Times reported on March 6 “Should war be declared against Spain, it will find the nurses and graduates of the New York Red Cross Hospital and Training School at 233 West One Hundredth Street, prepared to start for the front, for they have been holding themselves in readiness for the last two weeks in anticipation of a hurry call for their services in Cuba.”


Henry M. Flagler, who had been busy developing the coastal communities of Florida, gave land and $5,000 to the Red Cross to build a hospital in Miami, just north of his Royal Palm Hotel.  Twenty-five nurses from New York were sent to Florida in July to staff the new hospital.


Ironically, it was not battle wounds that the nurses were being primarily prepared to treat.    On May 22, 1898 18 Cuban physicians and 12 American doctors held at meeting at the hospital on West 100th Street concerning a greater danger:  yellow fever and malaria.  Dr. Emiliano Nunez, former director of Our Mother of Mercy Hospital in Havana, told those present that “at the present time fully 75 per cent of all soldiers from foreign countries coming to Cuba were likely to be attacked by epidemic diseases.”


The Sun quoted Dr. Juan D. Sollossa, in charge of the Red Cross in Cuba, as saying “As it is now of each 100 soldiers that go to Cuba twenty-five die from disease alone.  But this percentage could be cut down materially if proper hygienic conditions were established, as could be easily done.”


The Surgeon General requested that the Red Cross supply “immune nurses.”  In response an announcement was placed in the morning newspapers on July 19 that “applicants wishing to become nurses should be at the Red Cross Hospital” that morning.  Volunteers poured in from every walk of life.


Miss Dilworth told The Sun “For the most part the women who apply are attractive, able-looking women and full of earnestness…One has only to look at our volunteer corps, as they sit here listening to lectures about the proposed work, to see that they are a band of typical American women, women who are well and appropriately dressed and thoroughly accustomed to the niceties of life.”


One volunteer in particular was accustomed to the niceties of life.   The Daily Oklahoma State Capital reported that “Miss Margaret Chanler, great-great granddaughter of the original John Jacob Astor, has renounced society to act as assistant nurse in a Red Cross hospital ward, a sublime act of renunciation.”


The newspaper said “The suffering and dying to whom she will minister in Cuba will never know that one of the richest and bluest blooded New York heiresses is their attendant, for Miss Chanler desires to hide her identity when she dons the garb of the great order of mercy and the Red Cross sisters will respect her wishes.”


Margaret Chanler attended the classes at No. 233 West 100th Street and witnessed surgeries.  Others were not so resilient as the wealthy great-granddaughter of William B. Astor.   During one operation “One of the society women fainted.  Several were forced to leave the room.  It was Miss Chanler alone who stood her ground and established herself in a distinctive niche for the admiration of the experienced nurses who witnesses her heroism.”


Another socialite who donned the nurse’s uniform was Mrs. Thomas “a wealthy woman, who has signified her intention of going where she is told to go and doing what she is told to do,” said The Sun on April 28.


Sister Bettina told the newspaper “I would like it distinctly understood that we shall accept no more applications for war service unless the volunteer is willing to go where she is ordered, whether for relief work or field service.  A Red Cross nurse must be just as willing to obey orders without question, as a soldier.”


The patriotic fever to help in the war effort crossed gender lines and New Yorkers were surprised when The Sun reported on May 3 that “About fifteen men, in response to a wish recently expressed by Dr. Lesser, applied to join the Red Cross as volunteers to go to Cuba.”  The men’s entrance into the heretofore female-only field was gladly accepted.  That afternoon Dr. Lesser “gave them many practical and valuable points that will be of great use to them in caring for themselves as well as the soldiers, if they are ordered to the field.”


By the beginning of October 1898 all the nurses who had been sent to Cuba were back at No. 233 West 100th Street.  But they would not be here for long.  On October 2 The Sun reported that “The Red Cross Hospital at 233 West 100th street is removing to 259 West Ninety-third street, where there are larger accommodations.  There will be thirty-five beds, which will be ready by Saturday.”


The house-turned-hospital was sold at auction in May 1899.  In February 1900 the title was transferred to the Nameoki Club—the Tammany Club of the 21st District.  It was traditional for Tammany organizations to take Native American names and the Nameoki Club would offer a double-dose.  It was casually known as the “little Wigwam.”


The Nameoki Club was led by the powerful Matthew “Matt” Donohue.  A plumber, he rose quickly in the ranks of Tammany Hall, becoming the youngest man to sit on the executive committee at the age of 28.  By now the plumber had risen to the position of Superintendent of Sewers.  Donohue’s firm hold on the district was aided by the wealthy men who were listed on the club’s membership roles.


One was candy-manufacturer George William Loft.  Broadcast Weekly said on February 11, 1904, “There is no more regular attendant at the Nameoki Club than George W. Loft, whose luscious candies have melted in the mouth of many a Democratic and Republican woman…He is one of the men who have done most to enable Leader Donohue to build up the big Democratic following in the district.”


Loft had a lot of irons in the fire.  Having amassed a considerable fortune in the confectionary business, he diversified into real estate, banking and retailing.   He was a well-known breeder of thoroughbred racehorses and represented New York in the United States House of Representatives.


The same year that Broadcast Weekly wrote about Loft, the Nameoki Club found a need to expand its headquarters.   On January 5 the New-York Tribune reported that the club “is to be enlarged and remodeled at a cost of $5,000.  The architect is Thomas W. Lamb.”   Lamb was best known for his designing of theaters and it is possible that it was at this time that the basement and first floor levels were extended to the property line with a brownstone addition, and the entrance lowered to sidewalk level.


The election year of 1906 was marked by an especially bitter race between Donohue and Ross Williams.  As the Nameoki Club prepared for its summer picnic on September 10, The Evening World predicted that the Williams followers would try to derail the festivities.


“A report gained currency through the district that followers of Ross Williams, Mr. Donohue’s rival for the leadership, would attend the picnic with a couple of vans loaded with empty-bottles, pig-iron and lemons.  Mr. Williams indignantly denied that any of his men would attend the Donohue outing so equipped.”


The Evening World also predicted that the Nameoki Club members would come home with hangovers.  “The leader of the band bears the suggestive name of Prof. R. E. Sause.  Tomorrow morning a lot of the merry-makers are likely to be under the care of old Prof. R-E-Morse.”


As it turned out, Donohue lost the election by eight votes after what The New York Times called “a long and tiring battle.”


The Club remained in the house until January 1913.  The building was purchased by Ennis & Sinnott, who quickly sold it within the month to Thomas Jefferson O’Rourke.  The Sun noted that O’Rourke “will remodel the building for business purposes.”   O’Rourke simultaneously purchased No. 232 West 101st Street which abutted the property to the rear.


By August the renovations were completed and half of the building--the entire third floor and part of the second--were leased to A. W. Brown.


By the second half of the 20th century there were just two businesses in the building, which had been allowed to substantially degrade.   Then in 1998 new owners John D. and Rosemary Kuhns completed a full renovation and restoration, resulting in a single family home.  The Kuhns replaced the slate-covered turret cap with a handsome copper bell-shaped dome.   Above it an eagle weather vane, while perhaps not architecturally appropriate, is an interesting curiosity.


While few interior details survive, the remarkable Queen Anne house endures along with its equally remarkable past.

exterior photographs taken by the author
Posted by Tom Miller at 4:02 AM