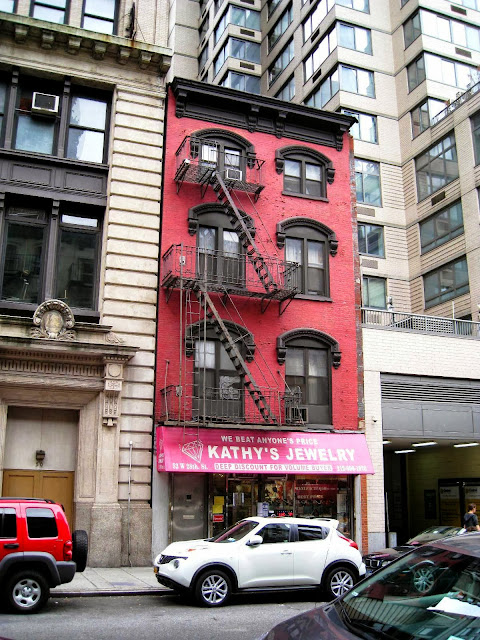 In 1876 Dr. Shaffer, a spinal specialist, was living and practicing medicine from the four story brick house at No. 52 West 28th Street.   It was to Dr. Shaffer that Paris-born Arthur Alexander Hessler was referred that year to be fitted for a steel brace.  Unfortunately, Hessler had already spent all his money on doctors and could no longer afford the $35 Dr. Shaffer charged for the brace.  He dejectedly went back to the Roosevelt Hospital.


By now the once-respectable neighborhood was undergoing drastic change.   The same year that Hessler sought Dr. Shaffer’s treatment, Alexander “Clubber” Williams was given command of the 29th Precinct—the district in which Shaffer’s house sat.  Williams happily expressed that he looked forward to getting some of “the tenderloin”—bribes and graft from the rapidly increasing number of brothels, saloons and gambling parlors.


The name caught on and the Tenderloin District became notorious as the most crime-ridden section of the city and possibly of the country.  Covering an area roughly from 23rd to 42nd Street, between Fifth and Sixth Avenues, social reformers called the neighborhood “Satan’s Circus.”


Dr. Shaffer’s 20-foot wide house was accessed by a brownstone stoop above an English basement.  Two bays wide, the windows decreased in size with each succeeding story.  A handsome bracketed Italianate cornice projected far from the façade.   The most eye-catching details were the ornate cast metal eyebrows above the openings.  The decidedly Victorian elements proved, originally, that the owners of the house were perhaps not wealthy; but were financially secure.


Mrs. M. A. Palmer owned the house until January 15, 1887 when The Record and Guide reported that she sold “the four-story English basement brick house” for $30,000.  Considering the neighborhood at the time, it seems like a good price—about $675,000 in today’s money.


The house where the respectable Dr. Shaffer treated patients became Lovell’s poolroom.  To Victorian ears, the mere word “poolroom” conjured visions of depravity and social ills.  The term did not refer to billiards; but to horse betting.  Western Union telegraph wires transmitted the winners and losers directly into the poolroom. The owners of the establishments were known as “poolsellers.”


The upper floors of No. 52 were leased as sleeping rooms to tenants whose reputations were not always spotless.  Philip H. Irving was living here in May 1892.  Irving called himself a theatrical manager.  A year earlier in October he met Charlotte Werl who was working as a model in an artist’s studio.  Charlotte was married, but had been separated from her husband for years and purportedly believed he was dead.


Irving protected the married woman’s reputation, initially, by introducing her as his sister.  That ended when he announced that “they have since had intimate relations.”  Charlotte Werl had him arrested on May 12, 1892 “to recover $10,000 for defamation of character,” according to The Sun.


Philip Irving was apparently as surprised as Charlotte was offended.   The Sun reported “he believes the action is brought to fleece him, as he thinks she has the impression that he has money.”


It is doubtful that Charlotte thought that a man who lived above an illegal gambling parlor had a great deal of money.    The dubious characters who haunted Lovell’s were not just gamblers; some were out-and-out criminals.  Three months after Irving’s arrest, a group of five scoundrels devised a scheme to swindle unsuspecting bettors.


James Wood (alias Levy), William Murray (alias Mulholland), James Thompson (alias Grace), Fred Barry (alias Charles Martin), and Anthony Ettlinger approached speculator William Roff, telling him they could provide him with information he could use in betting on the horses.


They rented a room on the top floor of No. 52 West 28th, ran a dummy wire from a bathroom on the first floor to the room, and told Roff they had tapped the wire that fed the race results to the poolroom. Roff was wary, however.  He had recently been fleeced out of $500 on a similar scheme and was reticent to part with the $2,500 he had in his pocket.


The New York Times reported on August 17, 1892 “Roff said that he sat in the upper room and when the winners came over the wire, which he was led to believe had been tapped, he went to the poolroom and there learned that the horses had been announced fully ten minutes before he got the information.


“This led him to suspect that things were wrong, and afterward he discovered that the gang got the names of the winners at the poolroom and telegraphed them from the bathroom to the room up stairs.”


Roff went to the police and the five scammers were arrested.


Fred Barry, whose legitimate job was as a dealer in electrical supplies on New Street, near Broadway, escaped conviction in the crime.  It would not be long before he was at it again.  He and four new accomplices were arraigned on January 29, 1893 for pulling the same scam, this time targeting Peter Downey’s poolroom on 12th Street and University Place.


The tradition of graft and corruption among police in the Tenderloin District would run head-long into the reform efforts of Theodore Roosevelt when he became Commissioner in 1895.    In his 1919 “Theodore Roosevelt: An Intimate Biography,” William Roscoe Thayer recounted Roosevelt’s early visits to the Tenderloin.  “More than once Roosevelt surprised a shirking patrolman on his beat, but his purpose they all knew was to see justice done, and to keep the officers of the Force up to the highest standard of duty.”


Reforms were difficult to maintain, however.  Although Lovell’s poolroom was closed down, the gambling den soon opened under a new name.  On January 11, 1896 The Times complained “The building occupied by Lovell’s poolroom over ten years ago, when this city was overrun with such establishments, has been opened up again.”


The new owner was Tom  Crawley, a small-time operator who would quickly find that the old days, when a few dollars guaranteed that police looked the other way, were over.   In 1900 The City Record noted that during a meeting of the Police Board on August 24 C. W. Weddle lodged a complaint “of gambling house” at No. 52 West 28th Street.  Crawley’s would be subjected to repeated raids by the newly-vigilant force.


One raid, just after midnight on May 1, 1901, was more than slightly botched.  “The Committee of Fifteen”—a group of detectives-- had been established to raid gambling houses and Crawley’s was on the list that night.  The men broke down the wrong door, however.


“It was reported about the neighborhood that when the committee reached 52 West Twenty-eighth Street with their attendant policemen, they broke into the house next door, at 54, for which they had no warrant, and that there they stumbled upon a gambling plant the existence of which they had not suspected,” reported The New York Times.


With no search warrant, the detectives could make no seizures or arrests.  Despite the disappointment, they went back into the street and headed for the right address.  By now some of the suspects at Crawley’s had escaped; but not all.


“One of the persons caught in this place got out through the front door and started running toward Seventh Avenue, pursued by half a dozen policemen,” said The Times.  “He ran through Seventh Avenue and doubled back through Twenty-ninth Street, where he was captured by Policeman Lesbader, taken to the station house, and locked up.”


In September 1902 another raid resulted in the arrests of John Ryan and Julius Ringgold.  Less than a month later another raid was made.  This time, according to the district attorney, “We were not looking for prisoners so much as we were for evidence of gambling houses being conducted in the Tenderloin.”


The detectives did not find much at Crawley’s, though.  “At 52 West Twenty-eighth Street, said to be conducted by Tom Crawley, the safe was entirely empty, with the exception of a small piece of anthracite coal.  [District Attorney] Mr. Jerome examined it, said it was of the first water, and carefully placed it back in the cotton in which it had been wrapped,” reported The New York Times on October 16, 1902.


The age of the Tenderloin was slipping away and by 1906 the neighborhood of 28th Street and Sixth Avenue was becoming New York’s wholesale plant district.  By now Jennie Liddell owned the building which had lost its stoop.  That year she leased it to A. J. and J. J. Fellouris for five years.


The brothers were owners of A. J. Fellouris & Co., wholesale and retail florists who specialized in evergreens.  The American Florist noted on March 3, 1906 that “A. J. Fellouris & Co. are preparing to remove to new quarters on Twenty-eighth street this spring.”   Their new shop space would be short-lived.


Only two years into the lease, A. J. Fellouris & Co. filed for bankruptcy.  In 1908 The National Nurseryman reported that “The American Evergreen Company succeed the A. J. Fellouris Co.  They will shortly remove to 103 West 28th Street.”


In their place florist O. V. Zangen moved in.  A wholesale dealer in cut flowers, Zangen had been doing business around the corner in the Coogan Building at 26th Street and Sixth Avenue.  The American Florist said “Mr. Zangen’s time is largely taken up with his seed business and the flower store will be managed by R. Gretsch.  If reports are correct, Twenty-eighth street will soon have them all.”


Within two years Gretsch formed a new firm when he partnered with the Ordonez brothers.  On June 11, 1910 The American Florist reported that Gretsch & Ordonez Bros. is the title of a new firm that will hereafter do business at 52 West Twenty-eighth street.  Mr. Gretsch has been located there for some time and is well known as an active and energetic young man.  The Ordonez brothers are importers and growers of orchids, with greenhouses at Madison, N. J.  They are well known in the trade and in this new venture we trust that all concerned will make good.”


The following year Jennie Liddell leased the building to Louis a. Rubenstein “for a term of years.”  Rubenstein would manage the property for years and on January 19, 1915 he rented the former flower store of Gretsch & Ordonez Bros. to Hugo Werner.


New York City’s wholesale plant district remained centered around Sixth Avenue and 28th Street for nearly a century.  The sidewalks were crowded with trees and palms, causing many to refer to the stretch of Sixth Avenue as the “jungle.”  Then in 1993 major flower wholesalers began eyeing the South Bronx where space and traffic were not a problem. 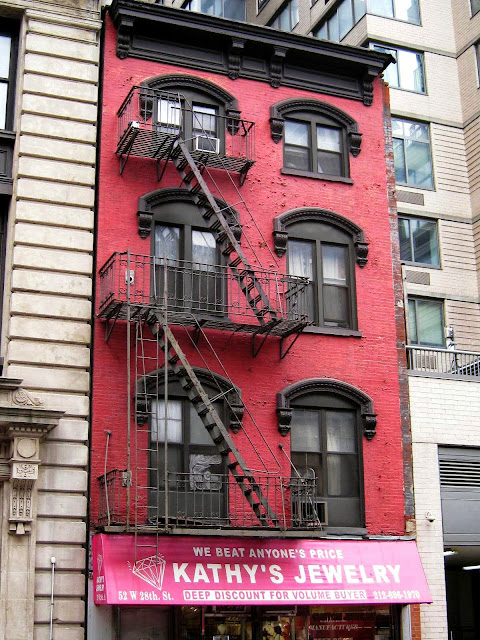 In the meantime, the block of West 28th Street surrounding No. 52 had changed dramatically.  The little brick building, now painted barn red, was nearly the last surviving remnant of the residential, the Tenderloin, and the plant district eras.  Today the house is easily overlooked, dwarfed by the soaring buildings on either side.  The hot pink awning at street level, the scaling red paint and the decades-old fire escape successfully disguise the still-handsome house and its place in a sordid chapter of Manhattan social history.

photographs taken by the author
Posted by Tom Miller at 3:29 AM