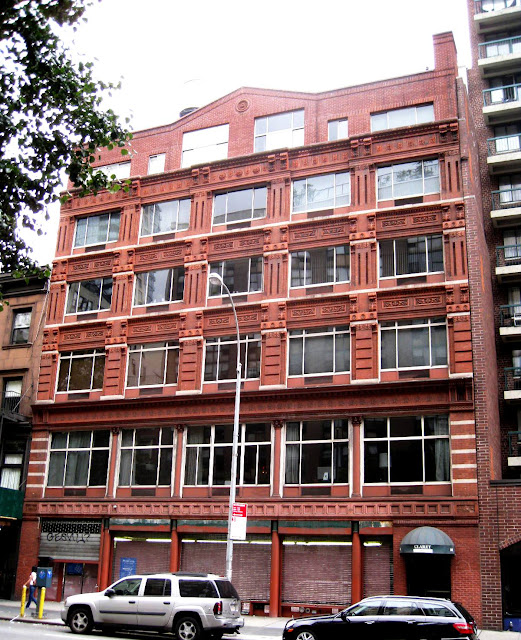 By the mid-1880s, the once-refined neighborhood of 23rd Street between Sixth and Seventh Avenues had changed.  Wide 23rd Street had become the center of New York’s entertainment district and theaters and musical halls dotted the thoroughfare from Fifth Avenue to Eighth Avenue.  The brick and brownstone homes were seeing new lives as boarding houses or were converted for business purposes.

No. 138 West 23rd Street was among them.  On February 14, 1885 The New York Times described the changes to the old residence.  “A cheap eating house at No. 138 West Twenty-third street, is kept by Theodore Lichtwitz, who accommodated transient guests with lodging on the top floor.”  When fire broke out in the upper floor, the lost grandeur of the home was hinted at in the newspaper’s assessment that “the damage to the building and frescoes is from $700 to $800.”

Two years later the house would be used as a recruiting office for the First Regiment.  It was around this time that Mary Cook sold her house next door, at No. 136, for $29,500—a respectable $650,000 or so in today’s terms.

In 1888 both Nos 136 and 138 would be purchased, along with the abutting No. 140.  Within the year the three homes would be demolished and an up-to-date artists’ studio building erected.  Professor John Ward Stimson had big plans for the site.

Stimson resigned his position as Director of Art Education at the Metropolitan Museum of Art that year to devote himself to “artisan” arts.  Believing that America paled in the artistic nature of its manufactured arts—like wallpaper, book covers, stained glass windows, and such—he set off to establish the Artisan-Artist Institute.   The editor of the New York Times agreed with the concept, saying “Here in New-York we have Mr. John Ward Stimson, a voice crying in the desert, in season and out of season, with letters to the papers and lectures before Columbia College, that our industries must be made artistic, and that the way to make them so is to establish a system of instruction.”

Stimson’s goal was, in his words, “to build up a practical art school worthy of American spirit and taste.”  Unlike other academies, the Institute would teach art as a means to improve American industrial decoration and to instruct students to make a living through art as craft.  The Times said “Mr. Stimson’s idea in the establishment of the institute was…teaching principles instead of mere imitation, and developing the democratic American idea that art is not necessarily the mere foible of the foolish, the fad of new fashionables, or the monopoly of the speculator.”   At the Artisan-Artist Institute the focus of art was on its application to industry.

Where the three houses on West 23rd Street had stood rose the new Institute building.  Five stories tall, it blended red brick with terra cotta and traces of limestone trim in the latest Queen Anne style.  Great expanses of window openings provided natural, northern light to the studios.   The Artist-Artisan Institute took over the fourth floor.  The building’s exuberant terra cotta panels, bands and other decorations reflected the concept of the work going on inside: practical decorative arts. 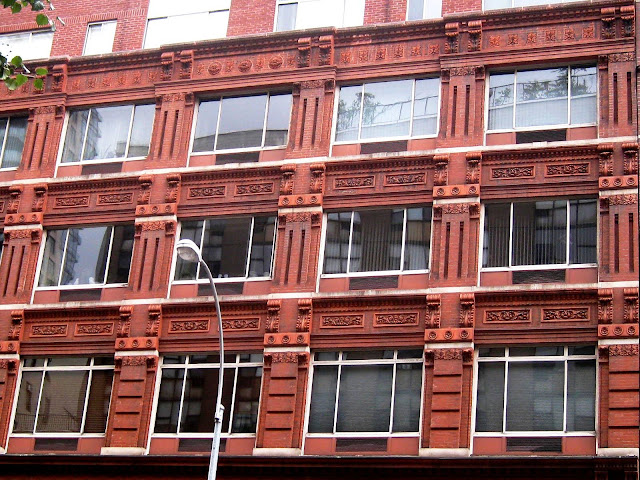 By 1890 the Institute had 250 enrolled pupils for the fall term.  They were offered a staggering field of instruction: painting, sculpture, architecture, illustration, etching, “stain glass,” ceramics, carving, metal working jewelry, interior decoration and plastic modeling.  Well-known firms that relied on employees trained in the decorative arts were quick to support the school.  Patrons that year included Tiffany & Co., the Gorham Manufacturing Company, the Whiting Manufacturing Company, Herter Brothers, Lamb Brothers, the Phoenix Silk Company, and others from the “jewelry, wallpaper, stained glass, silk and other art industries,” according to The Times.  The newspaper deemed it “the most promising among the art educational institutions of the country.”

The firms kept a close eye on the Institution, sometimes purchasing the rights to a silverware or wallpaper pattern, for instance, produced by a student for class; or sometimes simply offering a full-time position to a student before his class work was even completed.  In March 1889 one student nearly gave up.  His father died and, burdened with the support of his mother, he saw no way that he could continue his studies.  “Within a week thereafter one of his designs was sold to a large jewelry manufacturing firm in this city,” reported The New York Times, “and it was so well liked that he was sought out by the firm and given a lucrative position in their employ, with leisure to complete his studies at the institute.”

Even with the patronage of commercial firms, the school was not cheap.  Students paid $50 “in advance” for 8 months of day classes, about $1,000 today; and half that amount for night classes.

Space was available to other art-related organizations.  Madame S. E. Le Prince, who was also an instructor in the Institute, had a studio here in 1892.  On February 1 that year her studio became home to the New-York State Ceramic Club when “A number of ladies interested in the art of mineral painting” met and organized the club.  The Times noted that “Its object is to promote the interests of this branch of art, to form the nucleus of a school for mineral painting, and to take as active a part as possible in making a creditable exhibition at the World’s Fair.”  Mineral painting was a common pastime for respectable women at the time, resulting in homes filled with chocolate sets, china tea services and cup-and-saucer sets.
"The World’s Fair" mentioned by The Times was the 1893 Chicago World’s Fair, intended by organizers to show the world that the United States was on par with European industry.  In September 1893 The Evening World said of the Artisan-Artist Institute, “This institution is now practically at the head of the movement to raise American industry to a level of excellence, from the artistic point of view, that will enable American manufacturers to compete with the best foreign products of industry, not only in America, but abroad.

“This movement has received a great impetus since the opening of the World’s Fair.  The object of the Artist-Artisan Institute is national and American.” 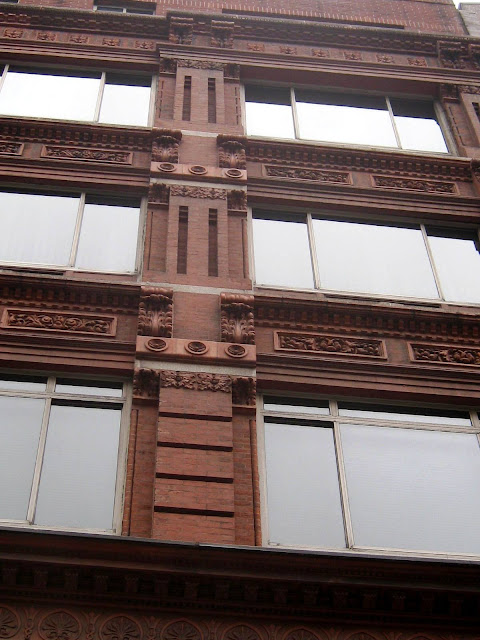 At street level was retail space, rented in 1894 appropriately enough to art dealer Ernest Huber.  Huber dealt in high-end art, one piece of which would cause a sensation throughout the city in 1894.  George W. Simms was a wealthy cloak manufacturer and an old friend of Huber.   Simms stopped by the shop around June 14 and Huber showed him a valuable collection of etchings.  “After he had gone, an etching entitled ‘A Lecture,’ by Diderot, was missing,” said The New York Times.

A week later it showed up a block away at the Knoedler Art Gallery at 22nd Street and Fifth Avenue when it was offered for sale.  Knoedler turned down the etching and notified the police.  Two days later George Simms was arrested, charged with stealing the $300 artwork from his old and trusted friend.

Seven years after the inception of the Institute The New York Times reported that the school’s own success was its greatest problem.  On June 3, 1894 it wrote “The institute has no lack of pupils, but it does need more room and more teachers…Mr. Stimson is greatly hampered by lack of funds for additional teachers and lack of room for the accommodation of pupils.  He should have a series of buildings, with ateliers and shops, in some lively manufacturing centre, like certain parts of New-York, Brooklyn, and Jersey City.”

The newspaper also commented on the ongoing rivalry between American and Europe in decorative arts.  “In the main the goal of the institute is to furnish American factories, manufactures, trades, and industries with educated designers who shall act as captains in the silent conflict—the great ‘deaf war’—between modern nations at peace with each other, the war industrial, the war commercial.”

To prompt donations for the school, the newspaper appealed to its readers’ emotional and patriotic weaknesses, hinting that the stress was endangering Stimson.  “That work has told on his health.  He has been ill of late, and, while his friends have been reassured as the gravity of his illness, there could be no surer means of hastening his convalescence than the news that some benefactor of the Auchmuty stamp had decided to make the Artist Artisan Institute a school in which thousands rather than hundreds might prepare themselves to uphold the liberal arts and manufacturers of New-York and the Union.”

The stress was apparently not so great that Stimson could not interest himself in romantic dalliance.  In April 1898 his wife, Eleanor, moved to Europe and in divorce papers charged him with cruelty and with having an affair with Miss Martha L. Norton.  “The testimony brought out that Miss Norton was a pupil of the artist,” said The New York Times.

In the meantime, other art academies moved into the neighborhood around the Institute.  In 1895 the School of Applied Design for Women was just down the street, at the corner of 23rd Street and Seventh Avenue; The Associated Artists was at No. 115 East 23rd Street; a art school connected with the Academy of Design was at 23rd Street and Fourth Avenue; and in the building with the Artist-Artisan Institute was the School of Industrial Art and Technical Design for Women.  Also in the building was Mrs. Florence Cory’s School of Practical Design.

Perhaps as a means to expand its accommodations, in 1895 the Institute joined forces with Mrs. Cory’s School and the School of Industrial Art and Technical Design for Women.

In November 1897 the school came under new management.  The New-York Tribune noted that “The institution for artistic instruction, founded by Mr. John Ward Stimson, has passed into new hands and has been reorganized."  Among the new instructors were notable names in the decorative arts including Louis C. Tiffany, Frederick Crowninshield and Charles C. Curran.  The Tribune took it upon itself to advise the artists on their roles.  “If these gentlemen will so instruct their pupils that one of the latter for example, being a designer of wall paper, can go to a manufacturer and say: ‘This is what I can do.  I can draw designs like this, which will adapt themselves in such and such a manner to the purposes of your busines’; if, we say, the ‘Artist-Artisan Institute’ can fortify its pupils to plead their cause with employers in this practical way, its ministrations will be a boon.”  The newspaper admonished “Instruction that merely fits the student to paint the mediocre landscapes or flower pieces that thousands of young artists have painted before does more harm than good.” 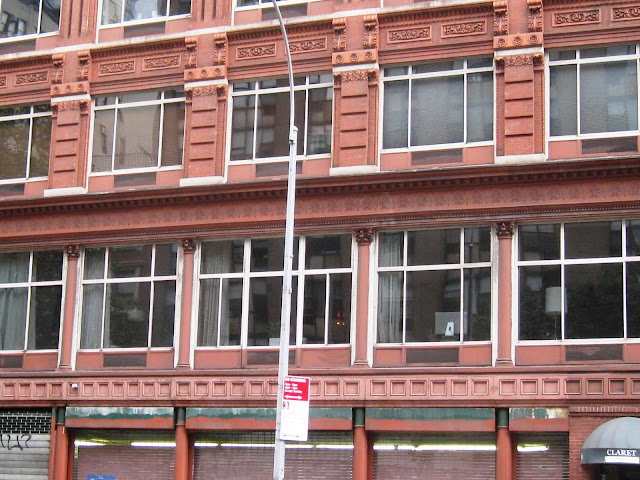 The school continued in the 23rd Street building into the first years of the 20th century, when esteemed artists like William Merritt Chase were teaching here.  But by the end of World War I the studio building had been converted to loft spaces and offices.  In 1919 Bradford Sales Company took the third floor and L.W. Sweet & Co. leased the fourth.  A year later J. M. Harris, importer of lamps and art goods, leased the retail shop on sidewalk level.  Harris had been at No. 324 Fifth Avenue but The Pottery & Glass Salesman said “The new location will give Mr. Harris a considerably larger showroom and will him to carry stock for immediate delivery.”

Apparel-related firms moved in during the next few years.  In 1921 the Rome Embroider Company moved in and a year later the Riker Dress Company leased space.

In 1990 the building was converted to residential use.  A sixth floor and mezzanine was added; the architect closely matching the original brick color and adding a terra cotta medallion in a valiant attempt to tie in the 19th century detailing below.  Today Chelsea professionals live in the spaces where young women and men learned the crafts that would earn them livelihoods as illustrators and designers.

photographs taken by the author
Posted by Tom Miller at 3:17 AM