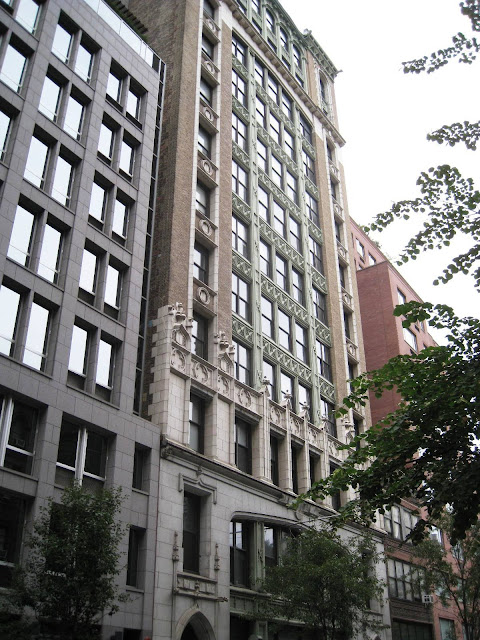 In the first years of the 20th century West 22nd Street, between Sixth and Seventh Avenues saw the rapid-fire demolition of old row houses—many built within the past 30 years—to make way for expansive loft buildings.  The garment industry was engulfing the former residential neighborhood and developers quickly seized the opportunity.


In 1910 alone more than a dozen houses were purchased and demolished on both sides of the block.  Among them were Nos. 150 through 154 on the south side, purchased by the Marmac Construction Company.    In January of that year The Bridgemen’s Magazine reported that a 12-story loft and store building was slated to replace the old residences.  “The cost will be $225,000,” it said.


The owners/builders chose as their architects Brown & Almiroty—a partnership that had so recently been formed that this was assuredly one of their first—if not their first—commission.   They could not have been disappointed.


While utterly modern, Brown & Almiroty’s loft building took its inspiration from the French Gothic.  Twelve stories of granite, terra cotta, cast iron and buff-colored brick were lavished with Gothic motifs while avoiding being over-done or preposterous.  Gothic arches, quatrefoils, and heraldic shields were joined  by a host of gruesome gargoyles—carved from limestone above the entrances and cast in metal at the cornice.   The purely utilitarian building, completed in 1910, was a delight to the eyes.
Even before construction was completed, apparel firms were signing leases for space in the up-to-date structure, which included electric elevators by Gurney.   On November 15, 1910 The New York Times reported that Columbia Button Works had taken the seventh floor and D. Saltzman & Co. took the eighth—a total of 12,000 square feet.  Saltzman, manufacturers of “cloaks,” would stay on in the building for years.


It appears that all of the building’s tenants were apparel manufacturers or related trim companies.  Other early tenants were Horwitz & Levy, makers of dresses; The Mutual Skirt Company; Lindenman Gross and Hindes, manufacturers of ladies’ coats; and Flaster and Bleier.  In 1914 Lindenman, Gross & Hindes’ business was doing so well that they took a second floor in the building, doubling their factory output.


When Benjamin Benenson purchased the building in August of 1916, it was fully rented.  Benenson paid $425,000 for the structure—about $6 million in today’s dollars.   That same year Rose & Frank Company took over the street level retail store and the basement.    The 1916 equivalent of a Staples store, Rose & Frank sold typewriter ribbons, “paper tissues,” carbon paper and other office necessities. 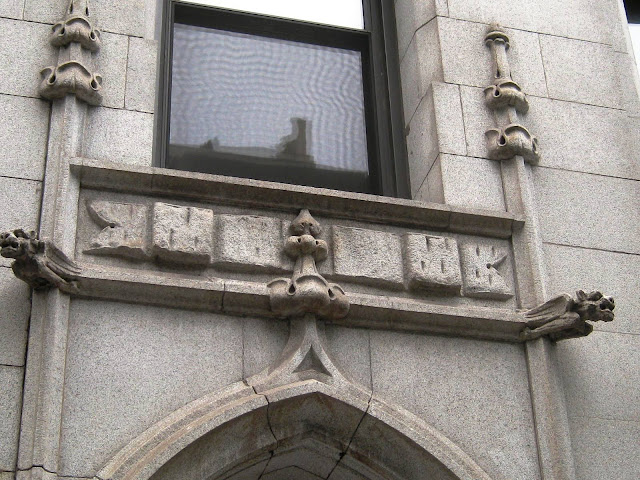 
Since January 1 that year silk dealers, mostly those who sold finished goods, had been plagued with break-ins and thefts.  In the less than two month period over $150,000 of silk had been stolen.    The New-York Tribune noted that “Steel doors, specially constructed shutters and burglar alarms have proved unavailing against the burglars, and the system of employing special watchmen has been abandoned as useless.”


On Saturday February 25 Detectives Fennelly, Oliver, Dowling and Hoffman, who had been assigned to work the burglaries, were made aware that four men had purchased jimmies at a local hardware store.  The cops followed them to No. 150 West 22nd Street.  There the thieves broke into the building and forced their way into the Schwartz & Finkel loft.  When they began loading $15,000 worth of silk into their waiting automobile, the detectives were on hand to arrest them.


Although by the time of the Great Depression the Garment District was firmly entrenched above 23rd Street, the building continued to be filled with apparel companies.   In the 1930s Blossom Products, Inc. was here, “manufacturers of ladies’ underwear,” as was the Drago Garment Company, makers of dresses.  Aggripino Drago, president, would have a major run-in with the East Thirty-fourth Street Vehicular Ferry, Inc. the summer of 1935.


The 38-year old Drago drove his car onto the ferryboat Mount Hope on the afternoon of June 21, heading to the East 34th Street ferry slip on the Manhattan side.  Drago sat in the automobile, the first in line, ready to drive off when the boat landed and the gates were opened.   Just before docking, the boat lurched and, according to The New York Times, “Timbers creaked as the engines were reversed and the boat came to a stop.”


Drago’s car crashed through the folding gate and chain and plunged into the East River.  While onlookers screamed for help for the man, Drago managed to swim to a piling and clamber up to the dock.   The ferry boat docked, the other automobiles drove away, and Drago’s car lay on the bottom of the riverbed.


Deckhands insisted they had wedged wooden stops under Drago’s wheels.  He said they had not.  The ferry company said the boat stopped suddenly because the car drove into the river.  Drago insisted the car plunged into the water because the boat stopped short.   Because the ferry company was a private concern, “and as there was no one else in the car and no apparent injuries to Drago, the police did not raise it.”


The Times explained “Raising the car will be a matter for Drago, the ferry company and the insurance agents to work out the police decided.”   Aggirpino Drago did not show up for work that day.  Instead he went home wet, angry and carless.


As they had in 1918, suspicious police foiled another robbery attempt at the building in 1960.  An employee went to the bank at Fifth Avenue and 23rd Street on August 26 and walked back with “a bulging envelope,” as described by The Times.  Two detectives, Russell Zacka and Daniel Santora “of the safe and loft squad” became suspicious of two men who appeared to be following him.


When the man entered No. 150 West 22nd Street, the would-be thieves disappeared into the building behind him.  The detectives closed in.


Before the robbers, carrying .45 caliber and .22 caliber pistols, could attack the employee, they were in a scuffle with the policemen.    As 24-year old Isaac Hicks, Jr., tried to pull his weapon, he was shot in the abdomen; his cohort Ferman Wray surrendered and confessed they had followed the man from the bank.
Today the ground floor, once a World War I era stationery store, is home to Geoff Howell Studio.  The visual merchandising, prop fabrication and “events décor fulfillment” firm was established around 1997 and has respectfully co-existed with the astonishingly intact ground floor details.  Although the flanking entrances have been altered and gray granite slabs have been pasted on; the retail store section is intact—including one set of Gothic Revival doors.  Overall, other than replacement windows, the delightful Gothic façade of Brown & Almiroty looks much as it did when apparel manufacturers scrambled to rent space in 1910.


photographs taken by the author
many thanks to reader Bob Andrews for suggesting this post
Posted by Tom Miller at 2:55 AM