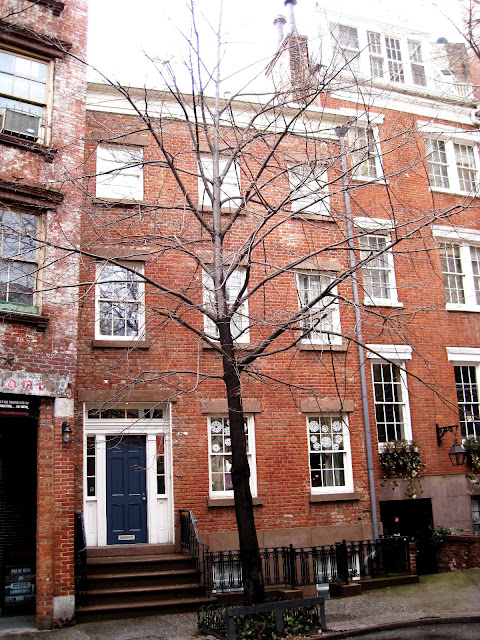 Winding little Cherry Lane in the village of Greenwich was renamed Commerce Street, perhaps to lure away businesses located to the south in New York City during the smallpox epidemic of 1822.   As the street filled with new residences (and contrary to the new name, few businesses), John Allen built his home here in 1838.

Although modest, the residence at No. 44 reflected Allen’s appreciable success.  At three full stories tall it snubbed the Federal-style in favor of the newly-emerging Greek Revival.  The red brick was trimmed with brownstone lintels and sills and a simple wooden cornice. 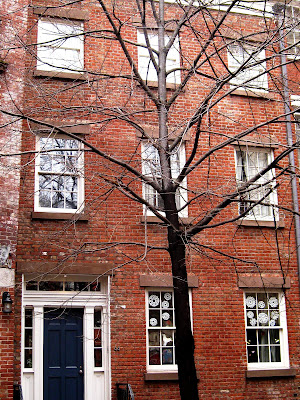 Half a century later the neighborhood was decidedly blue collar.  In the mid-1880s the house was home to Irish-immigrant William Maighan and his wife.  Maighan was a driver for the American Express Company and a member of the oddly-named Tough Club.

Trouble came to the hard-drinking Maighan when the Tough Club hosted its annual ball at Tammany Hall on Monday night, February 9, 1885.  The couple invited Maighan’s sister-in-law, Mrs. James Geahy who lived nearby at No. 7 Varick Place, to accompany them.  The problem started, however, when a friend presented Maighan with a bottle of absinthe earlier in the day.

The Irishman, assuming it to be whiskey, drank the entire bottle before heading out to the ball.  The New York Times reported that “when he arrived at the ball he was in an intensely excited condition, which was aggravated by drinking whisky and beer in the barroom at the hall.”

Mrs. Maighan’s sister at some point in the evening asked to be escorted home because of her brother-in-law’s rowdy behavior.  Then, in the early hours of Tuesday morning, the Maighans decided it was time to go home; but they could not find Mrs. Geahy.  With some help, Maighan was loaded into a carriage and the couple headed off to Varick Place to check on Mrs. Maighan’s sister.

Outside of the Geahy residence was C. B. Williams, a delivery clerk for a transportation company who lived nearby on Perry Street.  The drunken Maighan made a comment which Williams resented and an altercation ensued.  “Maighan drew a knife, closed with Williams and stabbed him seven times in the legs and right hand,” reported The Times.

William Maighan then continued home and passed out.  When he awoke the following day he had no memory of the incident and went about his business.  Much to his surprise eleven days later he was arrested by Detective Thomas Reynolds.

The little house managed to remain a one-family home throughout the Great Depression; then in 1938 it was converted to apartments, one per floor.  The doorway was moved from the parlor level to the basement and the Flemish bond brickwork was slathered over in stucco.

By the time the 21st century arrived on Commerce Street Greenwich Village had become one of Manhattan’s most desired residential neighborhoods.  In 2008 No. 44 was reconverted to a single-family home.  The restoration included bringing back the brownstone stoop and entranceway (perhaps a bit showier than John Allen’s original), and stripping the stucco off the Flemish-bond brickwork.

Brought back to its original appearance, the little house helps make this block of Commerce Street one of the most picturesque in the Village. 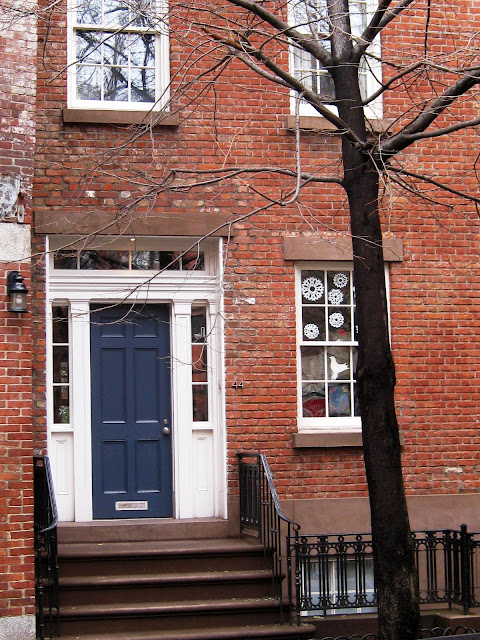